I am long and prickly,
strong but sickly
both heavy and light
with a gold grill bite.
and fourteen legs, to move to nowhere


The answer: The Golden Bridge.

Long: for its length
Prickly: for the Highwatch
Heavy: for the stone
Light: for the method of building
Gold Grill: for the entrance at Sheien
Legs to nowhere: what else could it be?

Traversing through the Mais Rows has always been dangerous, especially with cargo for trade. The bridge is meant to travel over the corn stalks to improve foreign trade with the other cities in the basin.

Due to the procedure of the Queen's Construction Method requiring tonnes of salt to lift pre-carved sections of road, carvers toiled endlessly to shape basalt and limestone into hollow trapezoidal cross-sections which made them light and contributed to their strength. There are jaguar patterns overlaying the dull stone throughout the bridge's exterior. From the Feet to the Legs, the design is dominatingly blockly, with triangular roofs tiled with decaying copper.   It also speaks a lot to gold salts' material altering abilities that only thirteen legs were all that were deemed necessary to hold up the gold road.

Sheien is the entry point of the bridge connecting directly into the corn court. It is an area sectioned off from the rest of the interior of the court, but floor plans will reveal that it is slightly higher and across from the Corn Queen's throne room.

Ket is the last fortress in the line of legs and the only one connected to the road itself. It guards the entry point where most trade goods can move through simply and easily.

As with all materials infused with gold salt, the stone that went into building the bridge turns softer than normal and accumulates yellow traces on its surface. In places where more salt was used, turned stone more golden than yellow. That is why the actual road is coloured gold and the legs' spotted pattern blended into the forts at its feet.

The Bridge's feet, not needing to travel far from the ground, remain grey from the stone. Conventional buildings surround the legs and though they are not suppose to, villages tend to spring around the fortresses to cater to the garrisons' needs and house High Watch families. 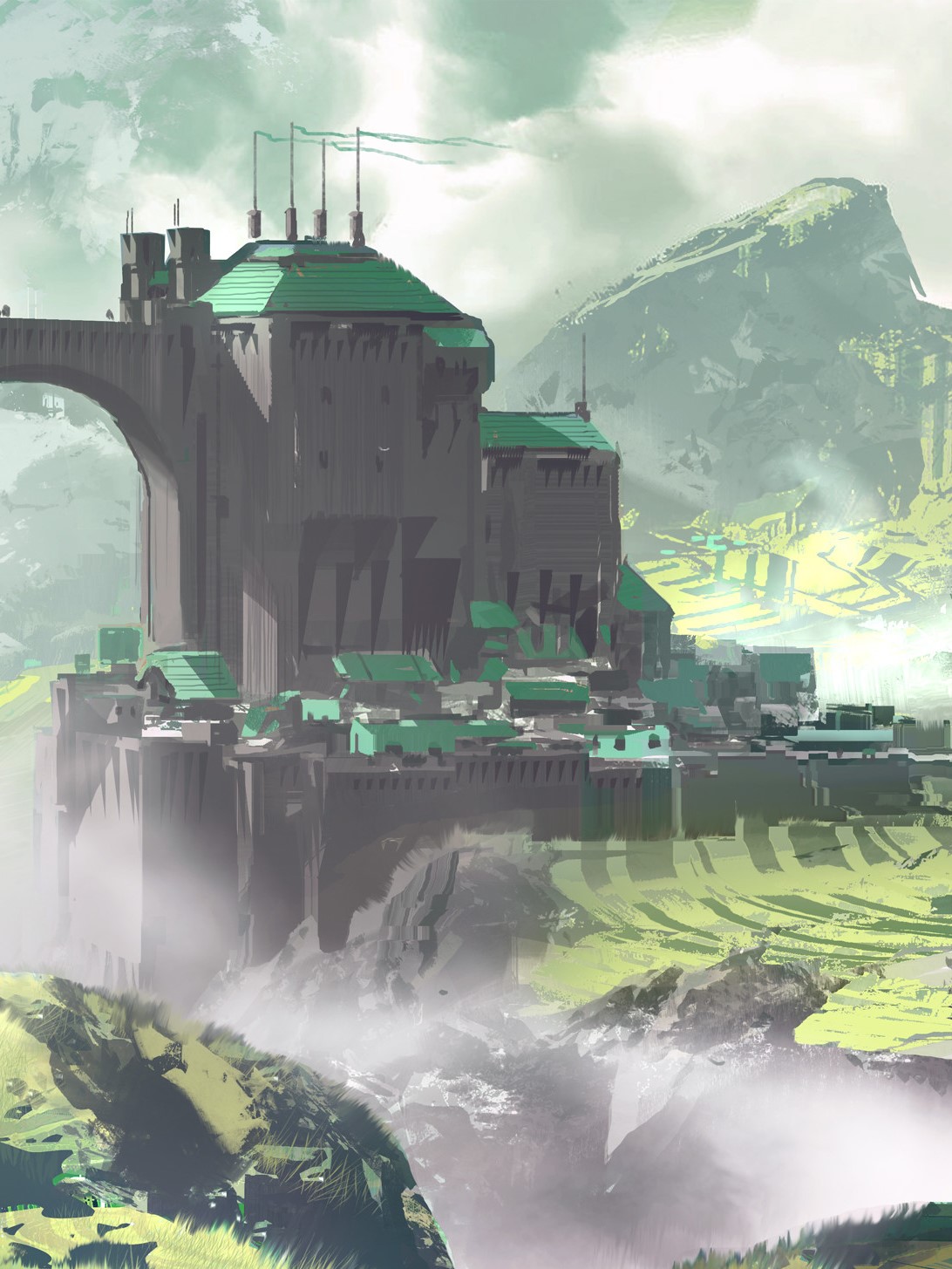 fortress with bridge by sparth

Men enlisted in High Watch ironically operate from the bottom of the bridge at its feet. But there are several additional way stations on the bridge road itself, staffed with guards, runners and attendants for travelers, and additional porters.

The natural land surrounding Ket is generally infertile. And for most of the time the fort was inhabited, this was not a problem. But as more and more peoples and caravans trekked through Salt Place to use the bridge to cross over the Mais; more and more resources were needed to facilitate them. As part of the plan, Ket was expanded to surround a newly established residential area and ground improvement techniques to make the rest of the land arable.   Kettsain

It is unknown just when the directive towards Kettsain's creation was given. Or how tons of earth was moved without the Ket fort commanders knowing. Or how a second secret garrison is able to move to and from their barracks unseen. Or how they're being logistically managed. Those who have tried to theorize on it mostly conclude that it would be too impractical.   Only the upper echelons of the court are truly aware of any operations that may or may not be happening at Ket.

The fortresses build into the bridges' foundations are referred to as the bridges' feet. There foundations were dug deeper than what would have been normal for the time using conventional construction methods; giving each fort larger dungeons and storage cells. They are kept as the same grey as the stone that built them, with little adornment. Fitting as military installations and courts of pronouncements.
1. Tlahueximch
4. Mestepec
7. Colmixca
10. Tepoxtla
13. Ket

3. Taltepan
6. Hichuaco
9. Chuaxtalte
12. Tenango
Sheien could be argued to be the 14th foot as it connects the bridge onto the Court's super structure; essentially acting as an additional means of support.

Here, we see the telltale features of a build built by the Queen's Method. The thirteen legs ascend for 60 feet with a square cross section and golden veins dancing over the grey stage.

The road that spans over the land for miles at a time and takes a rest at fourteen stops. As this section had to travel the furthest from the Rows below, its rocky makeup turned entirely to gold with intense use of gold salt.

When the first foundations were being laid for the first 8 fortresses, 3 outlying hamlets had to be relocated. As building continued, other nearby settlement fostered connections with the workers to better meet their material needs. Overtime, when the project was complete, these same villages saw more profit in tending to Highwatch garrisons and began slowly creeping closer and closer, until they were (by default) overseen by the Highwatch fortress they market to.

After a particularly torrential season, a piece of Salt Place suddenly fell off its side and destroyed a courtier reservoir dam leading to a flood surge that buried one village in mud and crashed around the Malanayuc Fort. This event saturated the local ground and turned it into a mud trap during the rainy season.

In practically every conflict with the Sang, the Golden Bridge was the focus of Sang strategy. The recent conflict between the two saw the successful conquest of Ket and Tenango. Normally, the loss or seizure of two fort would not be so detrimental to any one side, but Tenango gave sang force a foothold in Mais and Ket gave a direct route towards Sheien.

Cover image: Village of the Bridge by angrymikko