The Viper of Mino

A towering man, seemingly built of muscle, who was once a powerful Daimyō. He has an open, jovial manner that sometimes borders on boorish, but is a surprisingly adept commander, with some tactical expertise and a knack for leadership. In combat, he is able use his innate ki to grow to several times his already mighty size, granting him incredible strength and endurance, but becomes almost immobile in return. His hobbies include playing Shogi and amateur bonsai cultivation.

Saitō Dōsan was Daimyō of the Saitō Clan, who have historically ruled over Mino Province from Inabayama Castle. His incredible physical power combined with a surprisingly quick wit earned him the nickname "Viper of Mino" from his subjects, who in equal measure admired and feared him. Though Dōsan was not a tyrannical leader, he was neither remarkably benevolent.   Mino Province was among the first conquests of the Oda Clan under the new leadership of Oda Nobunaga. Though Dōsan was able to drive back the Oda forces several times, aided by his genius tactician and adviser Takenaka Hanbei, he was eventually defeated by the other clan's sheer furor and strength of numbers. Saitō Dōsan was absorbed into the Oda as a Vassal-Daimyō, while Takenaka Hanbei was recruited by Hashiba Hideyoshi.   Several months after his defeat, Dōsan was sent to aid in the defense of Ōtsu Castle in Ōmi Province under the command of Ishida Mitsunari. Though he was impressed with Mitsunari's leadership, it still grated on him to be under the orders of someone so young and inexperienced; a sentiment which extended to Oda Nobunaga as well. Despite this, he dutifully participated in the castle's defense when Aotsuki Tsukamoto of the Hashinara Clan invaded the province.   Unfortunately, the speed of the battle was such that Doōan was barely able to get out of the castle's gates before he was trapped inside a fiery dome with Ishida Mitsunari, who had created the flaming wall as a desperate last defense measure. He was able to dispatch several minor troops within the dome, but ultimately surrendered alongside Mitsunari when it became clear the battle was lost.   A short time after the Hashinara occupation of Ōtsu Castle, Saitō Dōsan responded to Aotsuki Tsukamoto's open invitation for any of the captured generals to join his cause. Though he would still be serving under someone significantly younger and less experienced, this seemed to him a better alternative than continuing to work under Oda Nobunaga who, while he respected her as a Daimyō, he still somewhat resented for the original invasion of Mino.   After this, Dōsan served Aotsuki faithfully, and came to develop something of a fatherly affection for the beautiful young general. He took to tutoring his new commander in Shogi, as well as acting as muscle whenever required, including one excursion to Bungo Province to obtain some wine for fellow Hashinara general Kamimusubi. During this trip, his mere hulking presence was enough to dissuade any rash actions by the roughs they stole the liquor from.   Dōsan showed some interest in Aotsuki's suggestions that they reclaim Mino Province from the Oda occupying force, and produced several maps of both the castle and the surrounding area toward this end. -- Currently, Dōsan serves as Bugyō of Mino Province and a close, trusted retainer and friend to Aotsuki Tsukamoto. 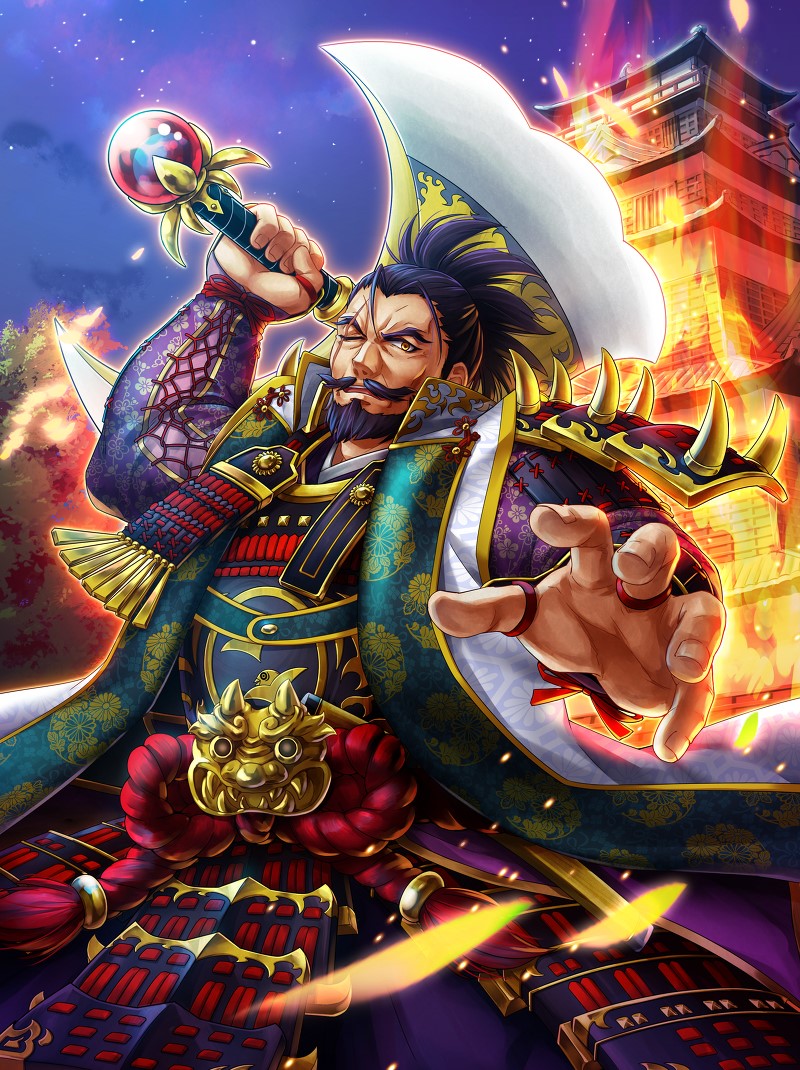