Daimyō of the Aotsuki Clan

A young man who has yet to reach his prime. Since he has joined the Hashinara, he's worked his wiry and lanky frame into something more muscular and defined.

Standing at 5'9", nobody could accuse him of being tall. However, he makes up for it with his attempts at style and grace, an inherent beauty about the man.

Aotsuki is a gorgeous lad with features that appear to be a gift from the gods themselves. His wheat blond hair immediately stands out in Japan, and his smile is something to behold.

Aotsuki has gone to great lengths to improve his abilities to defend his companions. To this effect, he has both trained with and watched Isoko, a familiar bound to Abe no Seimei, to improve his skills to the point where he can defend more effectively longer than most people should be able to. He's still considering whether to search out the teacher that's been pointed to him to continue down this path.

He has also chosen to align himself with Amaterasu. She has bequeathed him with gifts he still does not understand the full grasp of, but will forever be thankful for. First among these gifts are his two Sheele, Kagami and Tama. Kagami arrived when Abe no Seimei performed a ritual to provide Aotsuki with a Sheele. Aotsuki gave a piece of himself to the ritual, and received Yata no Kagami in return, who introduced herself as simply Kagami. She allows Aotsuki to see what normal eyes cannot with her mirror and is often able to notice even the smallest issues in their surroundings.

Tama arrived after Aotsuki had proven himself in a conflict with the Champion of Amaterasu , Hizashi. Hizashi provided Aotsuki with a dilemma, a lesson in the values Amaterasu holds dear. When he showed that he understood his position was not to judge and pass judgement, but to help and forgive, Hizashi allowed Aotsuki to receive the item, Yasakani no Magatama. This, too, was a sheele, who appeared and introduced herself as Tama. Ever since, Aotsuki has been overjoyed to have these two with him, but also constantly anxious about the idea of losing one of them due to his own foolishness. He is still slowly piecing together how exactly he will attempt to retrieve the Kusanagi no Tsurugi from Musashibō Benkei in an honorable manner.

Amaterasu also bequeaths her followers with distinct blessings, aimed at making the world a brighter place for those who live in it. Aotsuki has used these blessings to cure sickness, bring hope to others, allow his allies to overcome harmful effects, and even bring individuals back from death. However, each time he helps a soul cross that threshold, he needs to give up another piece of his strength. He is often more than willing to make this sacrifice.

He carries several things that he has been given from friends and companions since he has began his journey in the Hashinara Clan, and maybe even a few things from his life before. The most important piece of equipment he owns is his Crested Shield, given to him by his Advisor and Friend, Abe no Seimei. It is a round shield with his clan's Mon etched into the gleaming metal face. He goes to great pains to ensure the item is kept in safe, working order, and remains in as good of a condition as he can keep it. He keeps it strapped to his frame with a bloody strip of wolf hide leather, which was given to him by his bodyguard, Umashiashikabihikoji.

He has carried the same sword with him since before joining on with the Hashinara - A long, single edged Falchion. He found it tucked away on his parent's farm when he was a young boy, and asked to bring it with him when he left to join the recently deposed Daimyo. His father reluctantly agreed, but also seemed confused when Aotsuki revealed the blade, openly wondering where it came from. His mother remained silent during the exchange.

When he needs to appear in an official capacity, he is often seen wearing a cloak made of a shimmering, color shifting fabric over his clothing or armor.. This was given to him by Hosokawa Gracia , and she mentioned that she had received it from .

Aotsuki is a young man that grew up on one of the farms dotting the Yamato Province. His family specialized in fruits and vegetables that could be easily or palatably pickled. That usually meant melons, cucumbers, and eggplants. His childhood wasn't full of hardships due to his family's hard work. There was always food on the table and firewood in the hearth. His life was comfortable, which is what led him to the path he's on now. When he learned that the Province had changed hands, he took up arms to defend the clan that had been so kind to his family and let them live in such relative luxury.   Both of his parents are still alive and tending to their farm in Yamato. Unfortunately, he hasn't gone to visit his family since this campaign has started. The thought bothers him, although he doesn't wish to bring any undue attention to them.

Aotsuki is motivated by his desire to help and to see a peaceful land. Whether that comes in the form of assisting in a diplomatic mission or going into battle to defend his allies, he is always willing to give his all when it comes to assisting others. Very recently, he has also been let in on a secret kept from him since he was a child. With the help of Abe no Seimei, he is doing what he can to achieve this new goal and meet the expectations laid out for him.

Aotsuki prides himself on his persuasiveness. He often has the correct words and proper timing to allow him to turn unfavorable situations around. From his vassals to reigning Daimyos, he has tried on many occasions to keep things from devolving into further conflict. He also likes to think he's able to sift truth from lies that he's given. This often leads him to complicate matters for himself further however.   Aotsuki is a trusting fellow, often to the point of blindness. If something appears okay on the surface he will usually go with it. He has been working on being more vigilant after an unfortunate incident with a pit, a net, some lubrication and some magnetic forces.

Aotsuki genuinely enjoys the people he has become close with. He also likes trying to find new ways to make things better for later on down the road. When he isn't focused on his capacities as a Daimyo, he will find himself thinking up ways to approach situations that haven't happened yet in his head. Failing all of this, he most enjoys spending time with his new wife and two sheele. He finds solace in vegetation, even if he didn't inherit the green thumb from his parents. He has gained a new appreciation for aquatic adventures in recent times.
He can't abide by those who would use their strength to abuse others below them. But since that's common among normal folks, he also finds that he doesn't particularly enjoy constant, repeating sounds. He simply does not know what to do when faced with a person who refuses to budge on a point that he feels they are approaching or looking at the wrong way. This sort of individual will frustrate him, but he is able to keep himself in check and deal with the situation at hand. Katabuchi Yodo.

Aotsuki is willing to trust anyone once they've shown an inkling of being kind or "genuine." He will work to defend others whenever he is able and help however he can when the chance arises. He stirs hope and life wherever he goes and with the people he spends time with.

When there is a point that needs to be made, he will try his hardest to make it, even if the other person doesn't want to hear it. This can involve rambling, long statements, or repeating himself. Once given a reason, he trusts almost implicitly, willing to give others the benefit of the doubt. He worries about things that have not yet come to pass, with certain possibilities that cross his mind paralyze him in fear. An abundance of information or choices can also lead to faltering, the overwhelming decisions and possibilities spread out before him seeming to form a web to tangle him in.

Aotsuki works to keep himself clean when he can. Things have become easier since he has become lord of a castle, with easy access to water, soaps, and cleaning materials. He keeps his personal room tidy, but doesn't mind if one of his subordinates allows their quarters to become cluttered, as long as it doesn't pose a risk to anybody.

He has devoted himself to Amaterasu , and tries his hardest to live up to the ideals set forth by this religion. He realizes it is not his place to pass judgement on individuals, only to help and forgive when applicable.

Aotsuki speaks in a confident tenor. His voice projects clearly, but does not resound unless he begins to shout. He has a faint accent, but nothing that can't be covered up with a bit of thinking about it. He is able to keep a lid on it even while stressed. 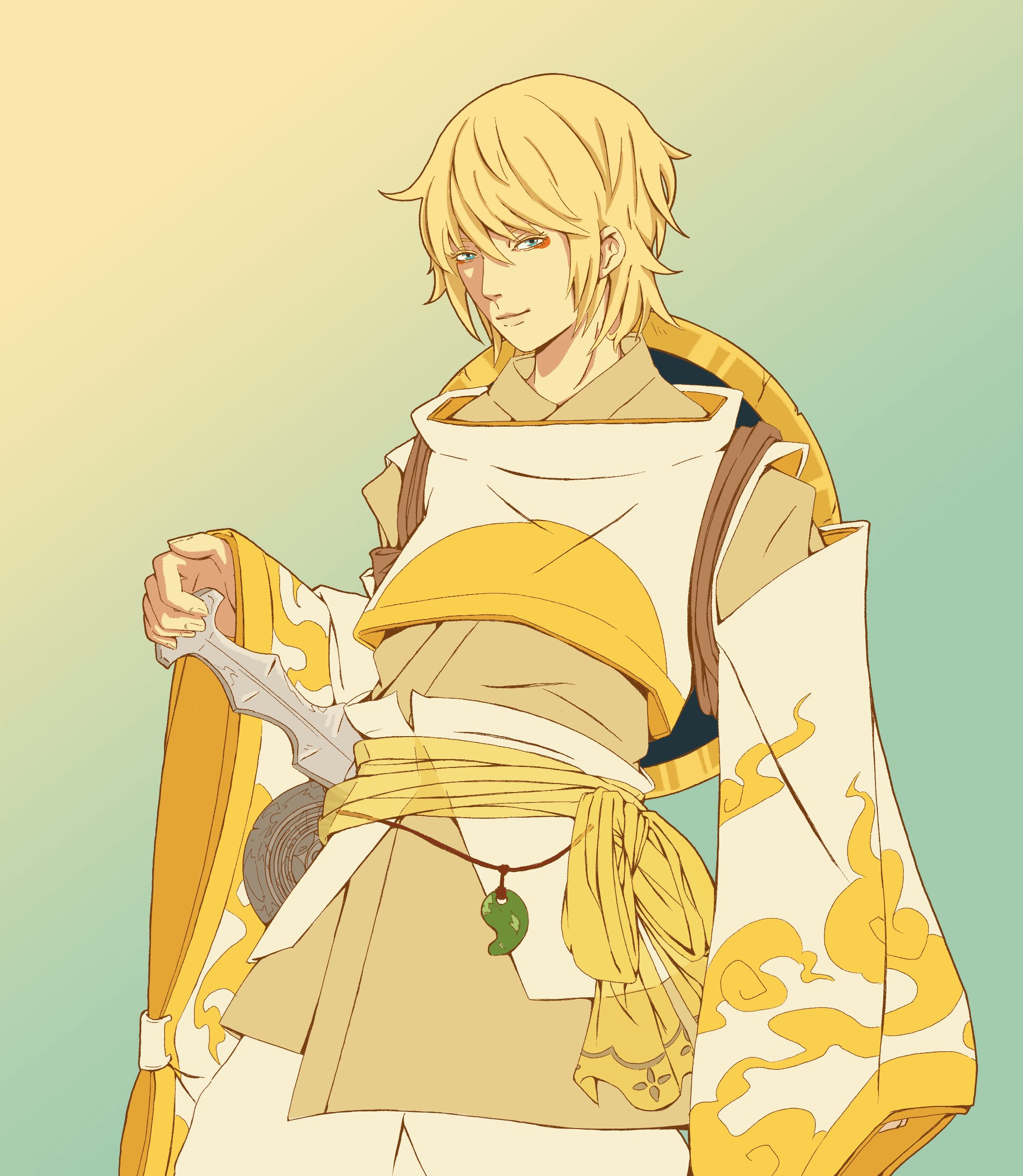 Soul of the Severing Blade 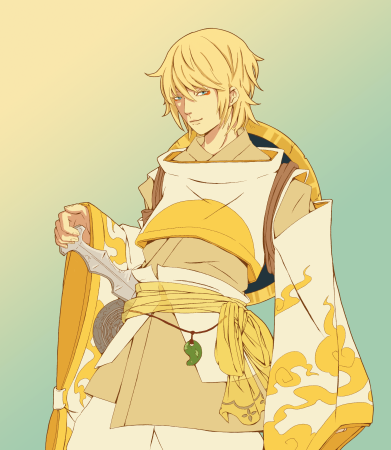