Originally, it was a kind of fan club dedicated to Drovil created by four individuals: Terrance Slane, Balian von Maria, Sebastian Velasco and Theodore Homeca.   It wasn't something concrete, something serious. They were friends who gathered to pay tribute to their creator. People heard about this growing group but it was a joke. Mâsa being a small town at the time, the existence of this group quickly became known to everyone. You could hear people joking around saying "Watch out you're going to become a cultist", it was a stupid way of saying.   But after the disappearance of the Ancestors, worship became more important. Over time, people became very interested in this "association". The cult is growing, integrating new members and a new reputation. Two years after the Fallen, the Angels Fallen Abbadon, Hamel, Sariel, Adriel and Zuriel contacted the four leaders of this movement. They managed to manipulate the Humans in order to take control of this group, which had become a great community, by turning them against each other.

"Humans will be stepped on by other races! Alone, you're not going to make it through this alone. The world is going to sink in these dark times and you with it. Will you see the daylight again? Will you find the strength to repel the magi and beasts of your kingdoms? The answer is no, without us."
— Abbadon

Theodore was the most naive and believed the words of the Angels from the outset. He designated Terrance and Balian as heretic and had them executed, while Sabastian managed to escape.   Seven years after the fall, racial conflicts erupt all over Anathema. Friendly relations disappear and give way to betrayal and hatred and Drovil cult gives way to the Theocracy of Homeca.   Today, under the reign of Charioce, people no longer see Homeca as a theocracy but as an empire. Today, people no longer see a holy war but a massacre. 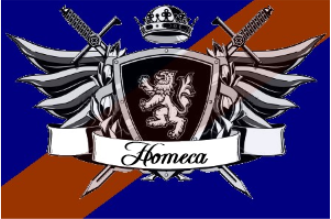