First we saw the stars. The night sky shone like bioluminescent waters, and the stars were watchful beacons in the distance. Some of us were wary, but we set out towards them.   The days lengthened as we got closer. I always knew hope. I thought I knew her warmth as surely as I knew caution kneading my belly into knots. It wasn't until we saw the suns that I first knew her appearance, feeling their warmth upon my cheek...   I knew what we were sailing towards would be home.
— A Halfling from the MS Annwn reminisces about their arrival

A mostly dead Creator floats in an Endless Sea. Their body is the Morning Realm. Stars dot the void above the Morning Realm. Between the stars and the realm is Atmos, the breathable air that sustains life.   Buried in the body of Ea is the Chthonic Realm and the mortal wound known as the Abyssal Wound. Underneath the Realms, deep down in the Cosmic Waters, the Abyss yawns.

Fear not the void. Is it not the dark that marks the hours of rest and respite?

The Void, also known as the Cosmos or the Clearing, is an endless void that stretches until infinity above the skies. It is the home of the stars and the suns. The Void is deeply associated with history and time. The gods and the spirits who make a great impact upon the realm are forever recorded in Celestia.

Celestia, also known as the Astral Seas, is the realm of stars and suns. Stars reflect the great spirits of the Morning Realm, and suns are manifestations of the gods. There are currently twelve suns in Celestia. Each of these is in the Heart, Eye or Head of one of the Signs.   A relief in the Chronicles shows a night sky with 137 suns, while some Castellite depictions of the night sky in the late Spoken era and early Written Era show 11 suns. It is possible that the eleven moons is symbolic. The Castellan Kingdoms believe that their High Queen is the physical manifestation of the god Castellan, and the sun of the Sign of Crowns may have been removed to represent this. 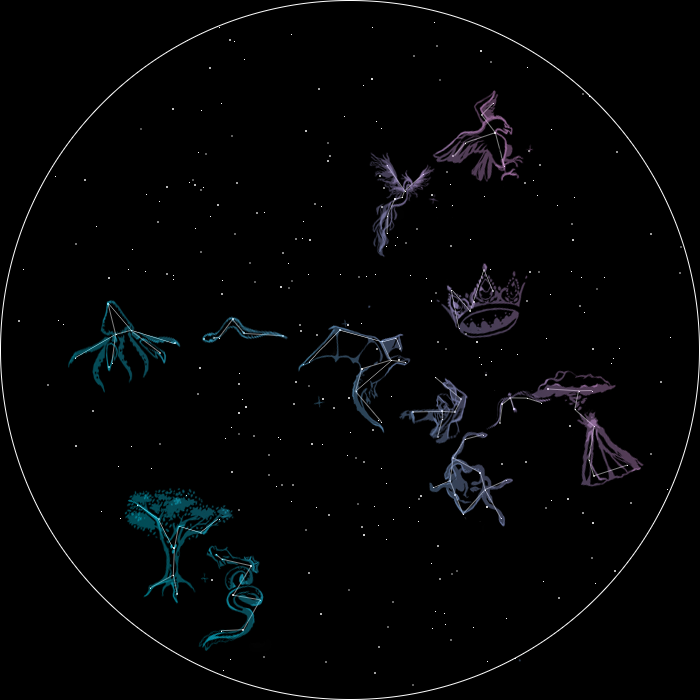 The Atmos is the sky between Celestia and the Cosmic waters. It is typically divided into the Lower and Upper Sky. Unless it is cloudy, the Atmos is a brilliant blue during the day. As the suns dwindle during dusk and swell during dawn, brilliant oranges, pinks, and purples splay across the sky.   Some scholars believe that humidity is proof that Atmos is an extension of the Cosmic Waters. Most believe it is most accurate to consider Atmos it's own domain in between the Void and the Cosmic Waters.

The Upper Sky, also known as the Dawn Sky, is the sky above the clouds. The air it contains is too thin to sustain mortals for long. The Upper Sky raises in temperature the higher you get. Flying in the Upper Sky can be dangerous. Many riders have lost conciousness after extended flights in the Upper Sky.   The Boiling Mountains scrape along the underside of the Upper Sky. There are only two places in the realm where there are mountains tall enough to pierce into the Upper Skies. In the west only the Throne of the Gods is tall enough, but in the east several of the Peaks of Store pierce the sky. 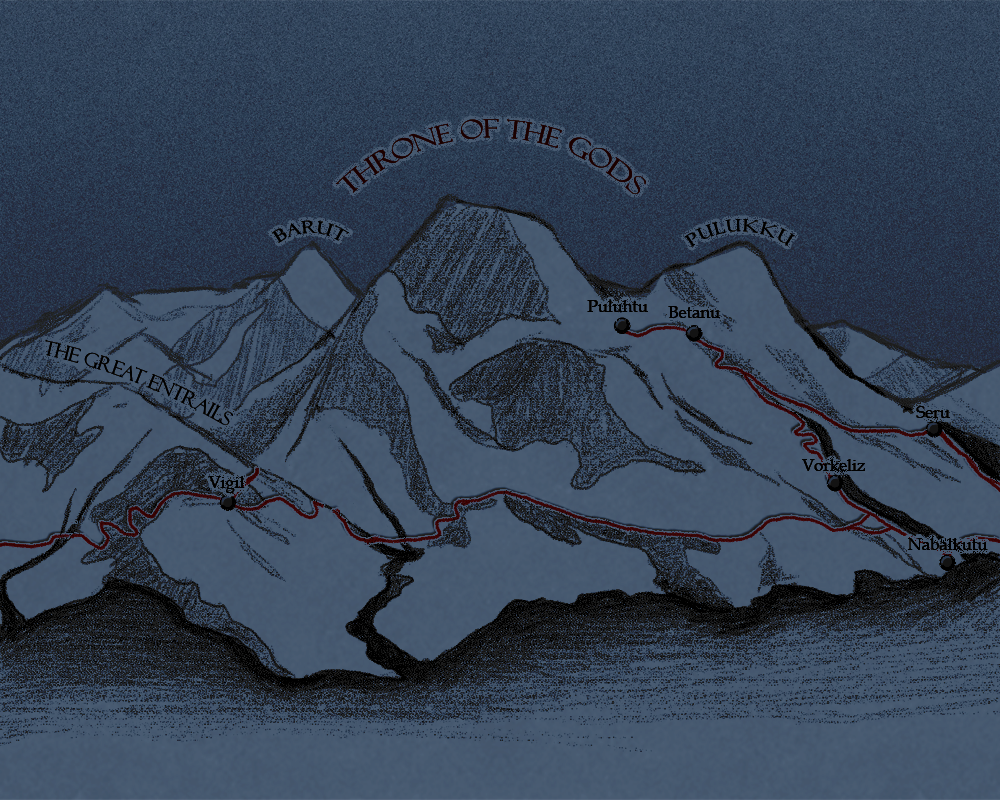 The Throne of the Gods, as seen from the western coast.

The Lower Sky is the air we all breathe and live in. Clouds are formed at the very top of the Lower Sky, and winds disperse them. The higher up in the lower sky, the more the temperature drops.

They knew we could be more. Ea made a sacrifice for us we can never repay. They closed their eyes, and plunged a spear deep into their heart. Their body became our world, their blood the hot lava, their divine essence our souls. That was how the Dream ended.   Don't worry, little one, a God cannot die so easily. Ea will live again after the Morning Realm has become Evening turns to Midnight. They do not regret creating us any less than we regret having you.
— Our World is Made of Love, The Dwarven Creation Myth

The Morning Realm is the only known continent floating in the Cosmic Waters. The continent is the body of the creator-diety Ea, who died at the end of the World Dawn.   The Morning Realm is divided down the middle by the Boiling Mountains. It is home to almost a hundred million mortals (73 Million as per the most recent census, which does not count communities who signed the Woodland Pact). 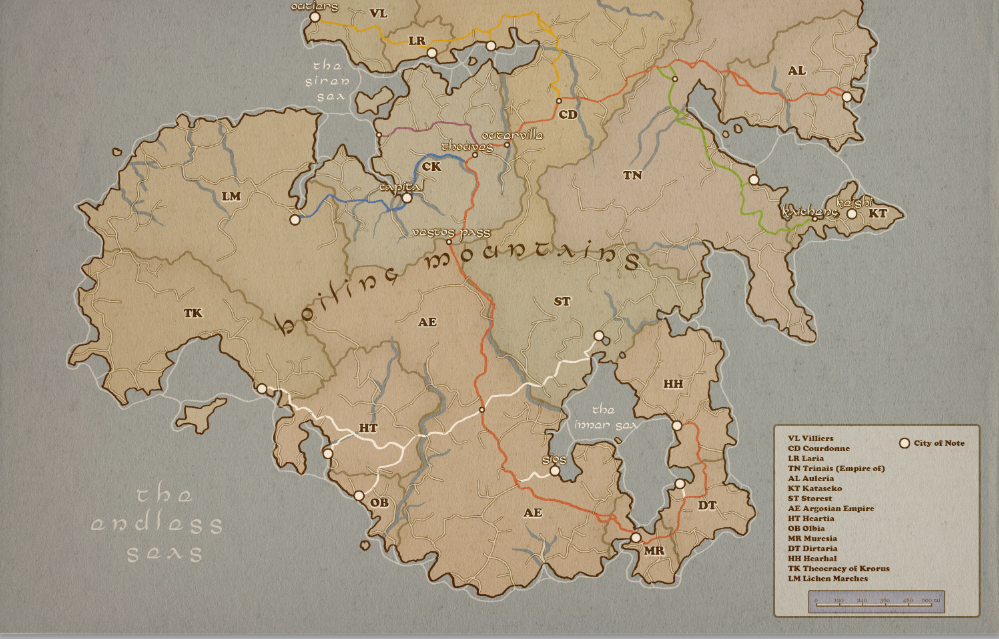 Parallel with the Morning Realm is the Ethereal Plane, a etheric reflection of the mundane, and several demiplanes supported by magic.

The first sign shall be a deep wound to the worldspine
It will bleed evil hereto unseen,
and all that touch it will be changed forever
This shall end the dawn

— Revelation of the Signs

A horrrible rift known as the Abyssal Wound tears into the Chthonic Realm bleeding abberations.

Is Ae sad? Yes. Their tears flowed and filled the oceans, but those were also tears of joy, because they got to see you, my sweet.
— Our World is Made of Love, The Dwarven Creation Myth

The Cosmic Waters, also known as the Endless Sea or Apsu, is a boundless ocean. The ocean stretches out infinitely wide. There has been no sighting of another continent, but the arrival of the halfling Seasteader Fleet around 380 WE suggests there may be other realms somewhere far across the ocean. The evidence is not strong, the halflings aboard the Seasteader Fleet could not recall any former home, only that they had lived upon the ships for generations.   The Cosmic Waters contain many great dangers, especially further out from the realms. Leviathans, sea serpents, and krakens are only some of the dangers that lurk in these impossibly large waters.

The Abyss is the deepest depths of the cosmic waters. The pressure of the Abyss swells to intense degrees, until it doesn't. Patches of the Abyssal Zone are weightless rathed than weighted, and strange underwater dust storms swell.

I'm no longer working on the Morning Realm, but I'm leaving it up for anyone who is still interested in my past work. If you want to see what I'm currently working on, check out Solaris!
The Morning Realm is written and illustrated by Annie Stein.   The Morning Realm is unofficial Fan Content permitted under the Fan Content Policy. Not approved/endorsed by Wizards. Portions of the materials used are property of Wizards of the Coast. ©Wizards of the Coast LLC.
Article template
Physical / Metaphysical Law
World
The Morning Realm
Category
Geography
Author
nnie
Publication Date
9 Dec, 2021
Creation Date
8 Dec, 2021
Last Update Date
4 Oct, 2022
Visibility
Public
Views
655
Favorites
43
Comments
8
Work In Progress
Tags
Worldember 2021 ⭐ Featured

Such incredible work, not surprising since the legendary Annie wrote this. I love all the star signs! :)

Thank you so much! I was so happy when I realized I could embed the images here and show them all off. I am very proud of them ^^

I really love the comparison of stars with bioluminescent waters, it's so poetic and reveals a lot about the culture of the characters :D   Great article with a very interesting cosmology and your magnificent constellations :D I like the way you're represented the different realms in your schema on the top right. (only feedback I have is that the writing in your throne of the gods drawing is a bit difficult to read, black on a dark background)

Thank you! I'm very flattered you find it poetic   I agree that the drawing isn't ideal, I hope to redo it at a later date and add a bit more character to it beyond just the overall shape of the landmass.

Whoooa, this is so cool! :O I love how you've obviously put so much thought into the cosmology, and all the different theories and things. It's nice that this doesn't give us all the answers but leaves us with more questions.

Amazing article as always. While I love your descriptions the Dwarven Creation Myth is my favorite part. Your dwarves sound so wholesome and amazing and this makes me want to learn more about them.

Thank you! It's one of my favourite things I've written for the morning realm, so I'm glad others like it too <3

Amazing article with a very unique cosmology. I think I like the fact that the mountains reach the upper sky where it is hot and are therefore called the boiling mountains. Makes it really stand out :) Very interesting world!

I never noticed that! It's an interesting connection! I will say that it isn't so hot as to be boiling in the upper skies (it's the same as our own skies, actually!). The mountain range is typically said to be named after the many volcanos in it.   Thank you so much!

I love this take on cosmology! Especially the quotes, this dwarven Genesis sounds very lovely. And the illustration of Celestia with the constellation with the close-up looks on the side, simply gorgeous! It only leaves me eager to learn more about these layers of the world :D   Very great work!

Is this a flat world with not one sun, but 12? I like the radical "what if" this presents. Even the horizon would look different on this world. Eratosthenes can bite it. :D   Also, the Abyss section seems to cut off mid-sentence. Did you maybe delete something by accident?

It sure seems flat, and there definitely are at least 12 suns. Sometimes more. The suns don't work much like our own though, they swell and dim rather than travelling east to west like ours do. That means that sunsets and sunrises are at the top of the sky rather than the horizon like we're used to!   Oh! It does seem a bit broken, thanks for letting me know! I'll fix that