A sunstone, also known as a Viking compass, is a navigational tool. It is a piece of clear glass-like calcite. Nowadays known as Iceland spar, formally known as Icland crystal. Iceland spar naturally occurs on Iceland and can be broken off into diamond-shaped pieces. The colour ranged from clear like glass to milky white. Some pieces are homogonous and others have multiple internal fracture lines.

How does it work

Due to the special crystallized structure of the sunstone, it fractures light twice in opposite direction. This polarised double refraction is what is used to find the sun on cloudy days or during hours of twilight.

One looks at the sky through the sunstone and where the sun is behind the clouds or just below the horizon, there will be a yellowish shine. This method can locate the sun within a few degrees accuracy. 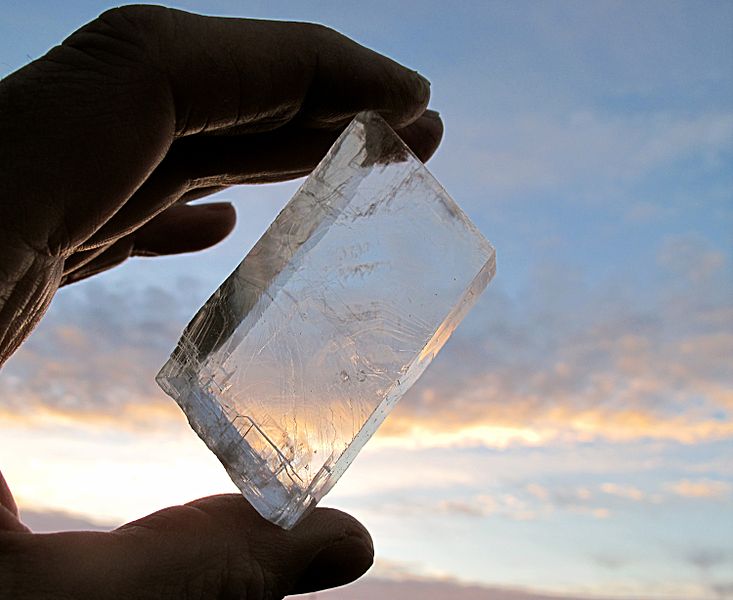 A piece of Iceland spar by ArniEin via Wikimedia Commons

The Vikings are well known for using sunstones as a method of navigating. But the sunstones did not fell out of use immediately after the appearance of the magnetic compass in Western Europe in the late 12th century.

This is proven by the wreckage of the ship which sunk near Alderney in 1592, as the archeologists found a sunstone among the wreckage near other navigational instruments.

The first written source of sunstones dates back the 12thcentury, and tells the tale of King of Norway, Olav Haraldsson (995 - 1030) learns of the Sunstone and it's use from a wise man named Rauðúlfr while they where traveling trough dense fog near the Swedish border.

Captain Peter James Jacobson of the Narwhal owned a Sunstone. Which was made out of an unusual hexagonal shaped piece of Iceland spar, measuring seven centimeters across. The Sunstone was clear as glass and only had minute fracture lines around some of the corners, the surfaces were polished with an unimaginable fine grid.

The sunstone was set in a golden frame inscribed with Runes around the outer edge. It was stored in a dark brown leather pouch lined with sky-blue velvet on the inside.

What translates to:
"May I show you what you cannot see."

After the acquiring of the Sunset Dawn, the death of Capt. James, and the splitting up of the Pirate crew the Sunstone remained onboard the Narwhal.

Answering: "an ancient and/or powerful artifact"
Visit Jacob-W's Competition Page Check all other answers to this prompt Competition Homepage

In response to: Summer Camp 2021, prompt 16: An ancient old or powerful artifact.

Great article! It brings me memories from my Geology Class from last year at college, when we were talking about minerals he told us about the Iceland Spar. The images are good and the excerpt about Jacobson's sunstone is a very nice addition!

I did not know these existed. Very interesting. I went on a google search to find out more. :D

Yeah :D Happy you found it interesting :D May it lead you to some inspiration for your writings!