There is no mortal capable of resisting Death for all eternity. There are many who have made the attempt. They do not succeed, for they remain mortal; they cling to their mortal needs and fancies, unable to take the steps needed to ascend beyond.   To truly become immortal is a task worthy of only those strong enough to give up the remnants of their mortality. They must die and yet remain living. Outsiders may view this as a cursed half-life, but to those successful, it is everything they could have wanted.
— The Anima Immortalum

Many arguments about the dangers of various magical schools can be made, for each holds a number of risks. Evocation lends itself to psychotic fixation on the elements, and enchantment can be used to entirely destroy the mind of another. The power they give is seductive to those without much self-control, and many an apprentice has been lost to magic-inspired obsessions.   But of the various schools, Necromancy has long since been declared to be the most dangerous. On a base level, the art of necromancy involves the manipulation of a being's life-force. Many once-good practitioners of necromancy soon learn to prefer the corruptive spells that allow them to raise the dead and twist souls, forever darkening their souls and drawing the ire of Pharasma's chosen.   Those who fall deepest into this obsession often become fearful of their own deaths. No longer willing to expire, they search for alternatives. Most commonly, they will convert themselves into vampires or other intelligent undead, trusting that their own powers will prevent them from being controlled by other necromancers. The very strongest, however, reject this. These powerful wizards and clerics instead turn to dark rituals and mass murder to transform themselves into the immortal beings known as liches.

Becoming a lich is not a simple task, nor is it one that remains identical for any two given liches. The exact methods to performing a successful ritual to lichdom are thus too varied to place into text, but remain assured that all attempts must involve significant use of necromantic magic and souls of the innocent to succeed. No lich can transform through entirely good-aligned acts. No lich is innocent.   With this in mind, there are some steps considered more 'standard' among circles of necromancers. Significant preparation through sacrifices of innocent lives and creation of a phylactery worth at least 120,000gp are two such steps. Once these and more specialised requirements have been fulfilled, the spellcaster may attempt to take the final step of transferring their soul into a phylactery. One more standard method of attempting this is through the ritual known as Eternal Apotheosis, included within the Anima Immortalum. Other methods involve the use of magic-infused constructs or carefully-worded deals with devils.

Jhyri paused in her exploration of the abandoned chamber. There, in the corner of the room, sat atop a pillow of royal blue, was a skull encrusted in more gems than she'd ever seen. "Guys?" she called out, turning to see her partners lifting up various spellbooks and once-enchanted goblets. "I think we're in the money!"   It was almost a shame she'd turned, for their expressions were not ones of delight. Almost - because the skull's deadly shriek gave her no time to process this. And thus the layer of dust in the treasure chamber grew ever thicker.

Other than the threat of wandering adventurers, liches are permanently at risk of undergoing a further transformation to the form of demilich if they should allow themselves to fall victim to apathy. This slow process is one that ensures the lich's mind is trapped within their own phylactery until it explodes, leaving behind only an aggressive and vaguely intelligent skull that seems almost impervious to most standard magic. It can easily be prevented by staying active, ensuring only the most ancient liches risk this fate.

Any creature that possesses a soul and mortal body can likely become a lich. Non-native outsiders are one of the species that may not become liches despite bearing a soul. Outsider souls are so closely entwined with their bodies that death destroys both: they cannot be raised from the death unless significant effort is expended, and thus cannot become liches or any other form of undead.   Existing undead cannot become liches unless first restored to life. This is occasionally impossible, usually due to the body's soul already having passed on (in the case of unintelligent undead) or due to the length of time elapsed since they first passed away.

Effects that anchor one's soul to their body will prevent any attempt at lichdom, as does any effect that separates a soul from a body and prevents it from moving (such as placing the soul into a soul gem). Being transformed into another form of undead will also prevent lichdom. The most effective solution to preventing liches, however, is simply to kill the would-be lich and destroy their intended vessels (body & phylactery) before their rituals are completed. Divine power used for repelling undead is particularly effective here.

Liches are almost universally treated as horrific creatures to be reviled. Paladins and other servants of undead-hating gods (such as Pharasma and Sarenrae) will actively hunt these creatures down and destroy them, for liches are considered to be a perversion of nature in the most grievous way. Their presence is even rejected by other necromancers, as they know full well what a lich has undergone and should rightfully be terrified. There is little more interesting to a lich than somebody it could turn and keep around as an assistant, after all.   The exception to this universal revulsion would be in the company of those who hold bargaining chips with specific liches, or those with the power to easily destroy them but no will to do so. This includes assassins and demonic cults, as well as certain groups of drow famous for alliances with darker entities.

Those liches that wish to function in regular society often mask their presence with spells such as Gentle Repose and Nondetection. Should they forget these spells, their death is likely imminent - not that this matters much, as very few are foolish enough to keep their phylactery anywhere near their physical form. Otherwise, liches tend to maintain homes in isolated areas that allow them to maintain their legions of undead and continue their studies.   Seiðrkolva's home of Foldauth is famously located in the harsh Iskaldhan mountains where few could survive anyway, whereas her rival Toraldis prefers the darkness of the Iskaldhan Underdark. Recently-discovered lich Ludrissiel Geltharieth seemed to have enjoyed a tower in Serendel Forest prior to discovery by the Lost Ones. 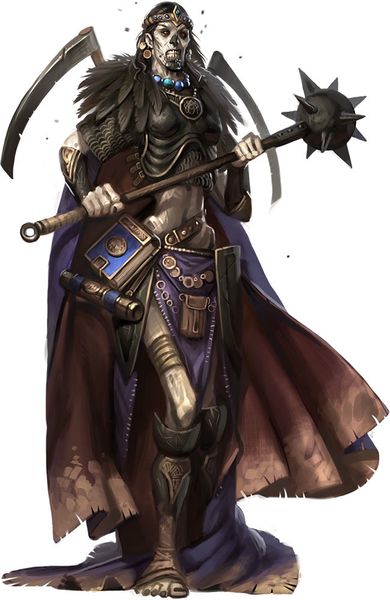