Crow Venestasia (a.k.a. Page of Plagues, The Seventh Son, Squawk-Doc)

Excerpt from Secrets of Saumai

The slow clacking of boots on cobble echo near the top of the stairs just as Synna sends her warning. The ancient iron-reinforced door creeks upon as if oiled with molasses.

Out of the torchlight corridor steps the good Doctor. He is stepping backwards, not even turning about to notice the party in his hovel. A ragged gloved hand cusps the door and seals whatever poor corpse lay below to its fate.

A few twists of the wrist and a pair of solid locks bar the door closed. With the grim business out of the way he straightens. A shiver runs down his spine, shaking his mask too much like a bird just escaping a bath. The Doctor turns around, expecting no one but his apprentice.

He jumps in a fit of surprise at the trio of women now accompanying his apprentice.
Skree!
He stands as still as a statue, spooked, almost like the trio had caught him stealing from a gory cookie jar. His shoulders slump as he takes in the situation, at last, stepping forward to his apprentice. Standing next to his assistant, he peers at the trio through his eerie mask.

Crow is one of the two native-born on the Trundler. He serves as the Trundler's doctor when he is not attempting to discover the entirety of his haunted past. He is a quiet and reclusive man. He only began to speak in more than a whisper several weeks after joining the rest of the crew.

Crow appears as a lithe BleakHeart; though not by choice. The young doctor had been exposed to malnourishment and difficult times his entire life. His skin is as white as the snow that blankets the land, and his eyes as red at blood. Crows build and facial features can be described as smooth, if not androgynous. Not many get too close of a look at his physical features, as he keeps himself covered and masked at almost all hours. His primary wear consists of gothic robes themed after the plague doctors of old.

The Town of Gorshi is where the crew found Crow. He appeared first as a quick and awkward doctor, with some sort of danger about him. Sellinus insured no one sat by him during the dinner.
Crow entertained Allarah, Ijin, and Synna while being offered to help with Laemon's injuries. He accepted the offer on good faith. 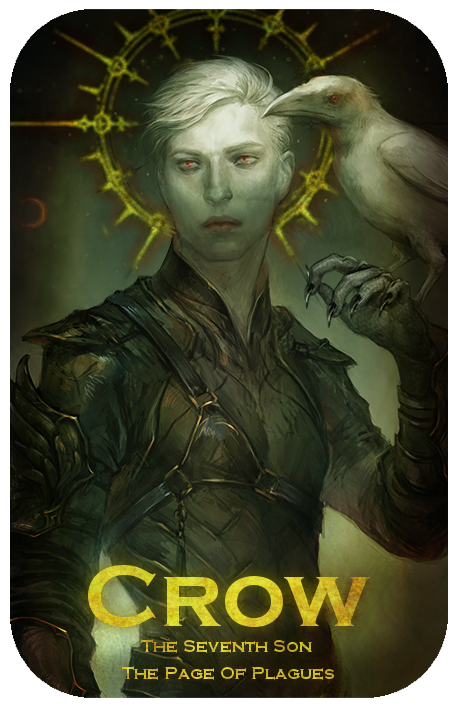 Crow wears the garb of a plague doctor suited for combat; protective leather sections over a dark cloth robe. On his face at most times, a white plague doctors mask. Red-tinted lenses provide his view of the world most times.

Crow carries the Staff of Kohliya, the Second Crow, and the whip of his mother dubbed the Exorcist's Lash.   The staff has the ability to release a cloud of healing nanobots. The whip can ignite into flames, forming a brutal weapon suitable to eliminating the Ghosts that plague Saumai.

People important to this character, and why.

Crow found himself attracted to Lysjho at first sight. He takes solace in his company many nights. The relationship is strong, and Crow will often defer to Lyshjo for social advice.

Crows relationship with Allarah is a rocky sea. They started their bond sharing the struggles of losing loved ones and facing tragedy. Allarah attempted to protect him, which backfired Crow's opinion. She seems to be slowly getting back into his good graces.

Guil is Crow's friend from childhood, he served as his assistant for many years. He often times reverts to talking to him about the troubles of the world. Though he has not been as attached to him since learning to speak to more than one.

Morkun is an uncertainty to Crow. His cold demeanor and hesitation to answer his questions have led to a tentative distrust.

Tskhan is an enigma to Crow. He seems to be friendly enough but his reckless explosion of several important things had made him a tad apprehensive.

Agata caught Crow's interest upon first stepping foot on the trundler. He had never seen another BleakHeart besides his parents. The native-born is constantly curious to learn more about her and where she comes from.

Ijin and Crow have interacted little, but every instance has been a learning experience for Crow. He bonded with her during the dive into Kohliya's library, and he learned how to use the communications link from her. He seems to like and care for her well being, as shown on the boat when she started to suffer.

What their goals are.
Crow wants to see the galaxy beyond Saumai at the end of it all. He also wishes to see that the people of his home will be safe. He does not wish his life upon anyone, not even his worse enemies.

What they hold dear morally.
Crow holds his oath to protect others very dearly. He will tend to others needs before his own, which can lead to often times troublesome situations.
Projection Appearance Unknown

This work is licensed under a Creative Commons Attribution-NonCommercial-NoDerivatives 4.0 International License.
All content herein is owned by Ethnis and Ethnis Studios, which are owned by Ademalian Enterprises.
It is developed by Ademal and co-developed by Barron.
All other credited work is either commissioned or gifted fanwork.
For more disclaimers, read here. Credit to for the idea for a header bar!
Powered by World Anvil