Yeah I came up with the idea of Asteroid Drags. Going three thousand kilometers per hour through an asteroid belt is one of those things that can actually get my heart going.
— Artosen Khandea II (Digger)

The Asteroid Drags are yearly sports events that occurs in the system of Perduro. The event involves racers and their team creating a Meteor Racer from an asteroid in the Perdurian belt. They are given a week to complete this task with nothing but basic tools and supplies. At the end of the week, a 'jockey' suits up, enters his teams Meteor Racer and competes in a 100-strong race around a volatile section of the asteroid belt. The losers face their defeat and watch their vessels be destroyed, the winner gains one hundred thousand credits and keeps their Meteor Racer as their own.   The Event attracts millions of spectators to the Perduro System, and trillions tune in on the Æthernet.

Asteroid Drags have their beginning in the early days of the Melancholic Lacuna. Low morale among the people of Perduro had begun to take its toll. People were looking for a thrill that they used to get through the Æthernet. Many, including Artosen Khandea II (Digger) took their boredom to the stars. Using spare parts from scuttled ships, they challenged each other to craft new ships out of the shells of hollowed out asteroids.

A True Perdurian Spectacle!
Gather around at your local bar, have a drink, and watch Peduro's Finest!   A Battle of the Minds!
Watch as 25 teams start with nothing but an asteroid and basic supplies, creating fantastic racing machines!   A Battle of the Metal!
In three days, watch these teams race their Meteors across the Asteroid belt in an adrenaline filled event bound to break the speed records!   A High-Explosive Action-Packed Party!
The Risk is Real! No staging, no seat-belts! Losers give up their creations to the explosive Finale. Winners take home their Racer and a 50,000 Credit Prize Pool!

When you tuck yourself into your little racer in space; you start to feel one hell of a power.

Then you turn the engines on. Pure Adrenaline- fear maybe. It could all explode in an instant, leaving you to be incinerated in a applause you can't hear.

Then you really give it some gas to get to the line and feel your heart sink to your stomach. Better than any sex or drugs, for sure.
— Veteran Jockey Alvin Wu-Jong

Competitions began to grow out of these engineering builds. Drunken bets on who could go faster turned into plotted out courses around the asteroid belt. Local attendees began to stream their builds in action. Digger, enjoying the thrill of the race, saw the potential to create his planets sport. He personally organized the first Asteroid Drag, drafting the new rules and pushing the event onto the local taverns. Digger even competed in the first drag, serving as the Jockey to his now recurring team, 'Psycho Shovels'   The first competition was a huge success, the people rallied with the sport, keeping it strong all the way into the banner era. The local phenomenon took its hold on the community at large. Every Asteroid Drag found hundreds of competitors from the greater reaches of the universe, and trillions of spectators.

The first stage of the race comes in the form of several shuttles leaving the port of Digger's Rock. The competing teams enter the asteroid belt via the shuttles. They then choose when to exit the vehicles, ejecting themselves into the vacuum of space with their tools and supplies in tow. They find their space rock, known as a 'stock' and set to work. Each team has three days to turn their stock into a Meteor Racer. They have to be pilotable, they have to be reliable enough to fly several thousand kilometers, and they have to be fast. The entire week is broadcast over space-capable streaming drones, one for each team.

At the end of the three days, the racers are pinged by the streaming drones. They have to stop their builds and bring the completed Meteor Racer to the starting line to start the actual drag. The drag consists of a network of space buoys set up in the guise of a racetrack. The buoys automatically navigate around the shifting asteroid belt, meaning that the course can change for each racer at any time.   The Race is on average fifteen thousand kilometers in length and takes around six hours to complete. Speeds are variable per racer but the record sits at 4752 Kilometers per hour. The drag is also the stage in which the most injuries occur. Collisions are frequent, and some more greedy jockeys have found themselves obliterated by an unseen asteroid. While only the top three racers win, it is customary to let everyone complete the race who is able to. There are no celebrations until the last racer has passed the final buoy.

After all the racers have crossed the finish line, they are reunited with their team. Those who placed in the top three get to drive their racers to the Victory Circle. Losing teams have to leave their vehicle at the edge of the asteroid belt, in full view of the planet. Everyone gathers near the winners and watches as the losing vehicles are destroyed in a fantastic display of colorful explosives that can be seen all the way from the surface of Digger's Rock.

Ya know it's a real shame that the WWW Watchworks Racer really didn't smoke 'em out there but I gotta say that my team did a real fine job out 'ere today. Stock was plat, steering was plat, engine just needed a bit more power on 'er. I think 'ell get 'em next year for sure.
— Post-drag interview of Jockey Dale Sor-rausch tor Perduro

Signal Bands for the Race are used to alert drivers of events during the race. Flags can be digitally sent to the individual racers through their HUD. A blue band on the flag denotes the signal is being sent individually to the receiving Jockey. If the primary color is solid, then it is a race-wide signal. The signal designs can draw their origins to flag-wavers of the mines which was a roll-back form of communication during emergency situations. 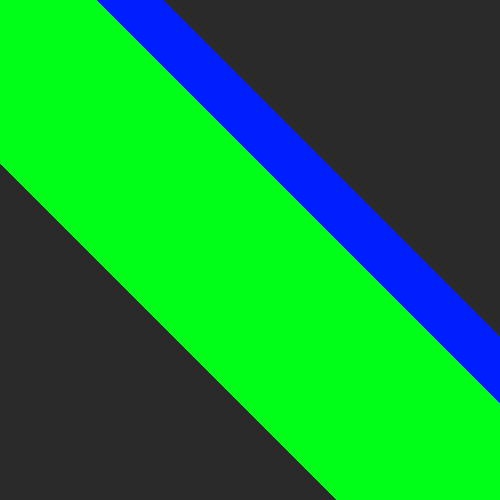 Go. All Speeds Allowed. Used to begin a race or resume a cautioned or stopped racer.Full Stop. All Jockeys are to stop engines and hold in place. Only used during emergencies. 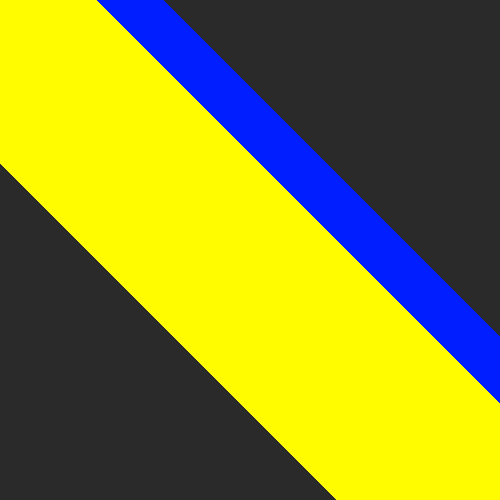 Caution. Danger Ahead, the speed limit is reduced to 750 KMH. 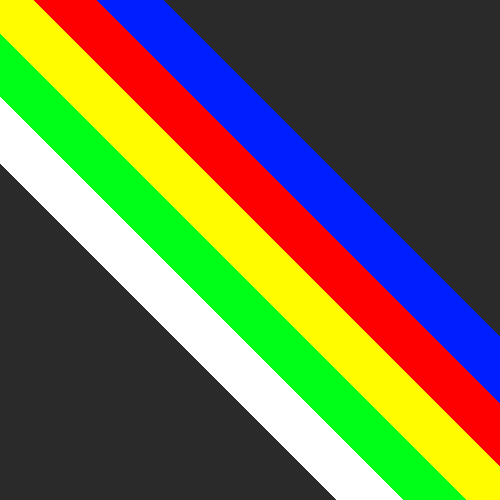 Finish. The Finish Flag is sent individually to racers as they cross. Top stripe turns to purple when all racers finish.
Primary Related Location
Perduro

A team entering the Asteroid Drags has to be four strong and declare a theme for their build. The makeup and actual skill of the team can vary as much as they wish, but they must fill four defined positions. The positions are the Engineer, Architect, Runner, and Jockey.

The Engineer serves as the mechanical master of the project. They are responsible for construction and installation of the engine, steering columns, and life support needed for the Meteor Racer.

The Architect serves as the designer of the Meteor Racer. They pick out the stock, and have to communicate with the other team members on how things need to look. They carve out the stock into the form needed, and make the ship look aesthetically pleasing and fit their teams theme.

A Runner serves as a resource gatherer and refiner. They go from asteroid to asteroid, gathering up valuable materials for use in the Meteor Racer. They also assist the Architect and Engineer in their tasks when not gathering.

The linchpin of the competition, the Jockey is the one who pilots the Meteor Racer during the race. A jockey has to have a chemistry with the rest of the team, as they have to design the Racer to their preferred design. A bad jockey can lead the entire project to be ruined in the first few minutes of the race. Jockeys also have the highest mortality rate of the team members, as they are the ones hurtling through an asteroid belt.

Every Meteor Racer is meant to be a unique expression of art and functionality that only the people of Perduro can provide. The team of racers establish what theme they wish to go for. Some are sponsored, many are silly, but at the end of the day a team can win a prize for their creative theme even if they lose the race.

Answering: "What is the most popular sport in your world? Explain the rules."
Visit Barron's Competition Page Check all other answers to this prompt Competition Homepage

You never want to leave engineers alone long enough for them to start to get ideas for "fun".   Very nice :D

Thanks Qurilion! I'm glad you liked it, it was fun to write!

Sounds pretty interesting. And dangerous. It reminds me of that thingy from Star Wars I.

Pod Racing! I actually had it compared to that a few times! Thanks for your feedback, if you think about it, leave a like if you enjoyed the read :)

Ahaha I love that this sport came about from bored engineers! I love the detail you've put into this, this is definitely a sport I'd want to watch!

Thank you! I'm glad you enjoyed the read! Bored engineers lead to much fun (and fatalities)   Make sure to leave a like if you really enjoyed it :D

Amazing detail on the race and love how it expanded to include so many. It does sound dangerous, and the mention of the obliterated jockeys is a nice touch. Also noticed small typo:"Some our sponsored," under Theme...assuming you meant are. :) Great Job!

Oh! Thank you for the catch. I'll get to fixing it right away! Glad you liked the article.   Make sure to leave a heart if you really enjoyed it!