from the collected good advice of
Miro Teague


So, there I be, loaded to the gunwales on Morodar's best rum when I gets the idea to go visit my ol' pal Mick. He's tellin' me about this new job he's found flyin' HVC across the Geldar Republic into Etrillon, the richest city in the Northiron Mountains (or Feron Arad as the Geldarians calls it). He's worried that these sprogs they has fer protectin' the cargo is too green to keep back the scallywags and bilge rats from stealin' the cargo in mid flight and t'inks a Stormborn Sorcerer might be a good t'ing to have along for the ride. He says, "So, mate, how would you like a job ridin' tailgunner on my back? It pays well!"

I looks up at him. Way up cause uh him bein' a full grown red dragon and all. "No sir!" I says. "I ain't babysittin' a bunch a sprogs". No sooner had the words left my porthole than a sizable bag of gold hit the deck in front of meself. It hit with a hefty thunk. I looked at the gold then looked at Mick and said, "Well hang me from the yardarm," I says, "Capt'n when should I be reportin' fer duty?"

Tha's how I wound up in the Etrillon underground. In a tavern called The Great Secrets Inn. (Not much of a secret if you ask me meself. First time here and I found it right off). I'm having a bowl of some kinda meat surprise with parsnips, potatoes, carrots and celery that had been in the pot most of the day. These dwarves didn' season the meat surprise (I call it "meat surprise" causein' it would have surprised me to find out this old boot leather I was chewin' was meat, but I digress), so I whip out the ole hot sauce to flavor it up a bit.

The Geldarians have these long tables with benches in these types of places and people just sit where they can. I'm sittin' near this stone cutter named Umbar and she's with her Brother Gunthar from the Stonefist Clan and they looks at me and Gunthar says, "whatcha got there Mister Teague?''

I smile and holds up the bottle "Rendercoon repellent," I says. "It's made from the four hottest peppers in all of Copan Shire: DeathBlossom, Dragonbreath, Naga Spit and Seven Rings of Fire." I hand him the bottle.

He puts some on a bit a meat and takes a bite chews and nods his head a couple of times but doesn't react like most people do when they try it. He hands me a little bottle that was sittin' on the table near his sister. Her blond beard was braided nicely with pretty ribbons, I thought, as I sprinkled a liberal amount on a bit a meat meself.

I don't really know what happened next.

I remember sweat, pain and a nosebleed.

Then it was mornin' and a healer was sayin' to the Stonefist twins that they should be ashamed of theirselves and that I'd be fine. I took some of that home with me for Rendercoon Removal, but I never put it in my porthole again.

I makes enough to last a while cause it takes three weeks to ferment. Gloves are an important piece of equipment when making this sauce cause it can burn the skin. Important note: no rubbing the eyes, had to see a healer once and never did it again. Ventilate the room cause the fumes from these and other hot peppers are not good to breathe. Again healer, nuff said.   Bowl full of brightly colored hot peppers: death blossom, dragonbreath, naga spit and seven rings of fire. Chop these peppers in half after removing the stems. I puts ‘em in a large glass jar seeds and all packed tight with cabbage leaves on top to keep the peppers from floating and become uncovered by the brine. The jar has been boiled and filled with a one third salt water (sea salt) brine to where the neck just starts.   Three weeks later the jar is carefully opened again in a ventilated room, with gloves on, and the peppers are mashed into a paste with a mortar and pestle. The paste is then pushed through a strainer and some of the brine is added back to the now sauce to thin it to a liquid.

"Aye" says I, I put it on most meats, in chili's, stews and bowls of legumes. Anything really that needs some flavor. I once put it on a mutton sandwich.

Oh and I asked Lee Chung and he says it's Bon Appetit! Just don't say it in Demar Forest at the Nutty Squirrel Tavern. Yer might get slapped. 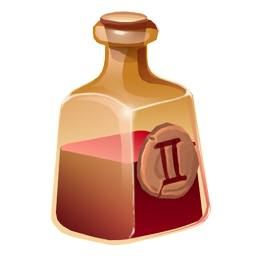 I am almost afraid to ask what-exactly happened at that tavern.   Almost.

That my friend is a tale for another time...

Should be enough time for me to get a batch of sauce ready. Big holiday comin' up shortly that demands friend chicken drowned in something just like it! :D

I dare say that it would be quite nice on chicken and your holiday guests'll rave!

I loved this style of article! I'm really worried about what that poor lad was fed in that tavern though...