A member of the Rosso noble family in Sardivelia. Him and his older brother Giovanni managed to survive Paoli Piedmonte's Red Monday massacre of 881, but while Giovanni decided to abandon Sardivelia Gianni stayed in their hometown of Matteo to become the family's leader. For years he proved himself a capable diplomat, establishing trade deals with the jeweler guilds of Gameria and helping to ensure a stable income for the family despite Paoli's ruthless taxes. He was reluctant to participate in Giovanni's plan to overthrow Paoli in the 890's, but in Paoli's eyes he was still labeled a traitor and deemed worthy of execution. Him and his wife Siena were killed in their sleep by Paoli's agents in an event known as L'Oblio di Rosso. 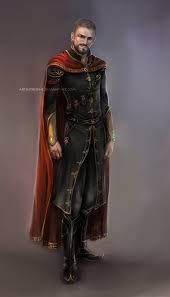