GHG Session 21: Some Feasts Just Aren't Worth It

Month 9, Week 3, Year 918
With the week drawing to the end, the Fantastic Fellows made their final preparations before venturing out to confront Bianca Avon and her fiendish patron Gray Hat. Phaedra picked up a copy of Rutik Kapuscinski's article about the group in the weekend edition of the Treeleaf Times, a thorough retelling of the party's exploits that had the group freaking out over how someone could know so much about them. Surprisingly, it was Zan'kiri who pointed out that Rutik was a journalist and part of his job involved collecting information about the group's bounties and adventures, things that they had done little to conceal over the past month. They all agreed to have more private team meetings in the future, and after Zan distributed his handmade armor and weaponry it was time to venture back into the Imperial Marshes.   With Jezebeth in tow.   Argus' thorough researching of the old routes between Ardin and Kassædeia ensured that the FF would get there in three day's time, give or take a couple of deadly encounters. There was some tension at first when Zan'kiri tried to get his skeletons to carry him in a palanquin before Phaedra quickly shut the idea down (Bubbles would be the only one allowed to travel with mechanical assistance). Jezebeth proved to be no slouch when it came to roughing it in the marshes, but her disagreements with the party would soon come to a breaking point so far removed from civilization.   Month 9, Week 4, Year 918

The first major point of interest on the journey was the flooded remains of the Much Ado tavern on the second day of journeying, a waystation for weary travelers of the former Elflands Empire's western reaches. Bubbles discovered a couple more skeletons to add to Zan'kiri's collection, swimming up from the submerged ruins of the tavern just in time to help in the fight against a swarm of maggots harassing the team. Ys got bitten pretty bad when the maggots started climbing all over her, but Windred made sure to patch her up with some poultices at the end of the fight and even Jezebeth helped out by casting 'Cure Wounds'! During the short rest Argus and Jezebeth did some more research on Gray Hat, the bugbear learning about how powerful entities can corrupt the countryside (in this case bugs) and Jezebeth theorizing that Gray Hat was demonic in nature. Naturally, a betting pool was formed to see whose theory would hold water by the journey's end.   That night Phaedra made some hearty stews and teas for the group before their watch rotations, the usual snark between Jezebeth and Windred continuing for a second day. The petty remarks were a symptom of Jezebeth's feelings that her career had been ruined by the FF, but Zan's mocking comments of her college education proved to be a bridge too far. Jezebeth unleashed weeks of pent-up frustration, explaining how she let the party into her confidence only to be immediately betrayed and undoing years of hard work on her aetherforged project. She agreed to help the party in the aqueducts and summon a 'Heroes Feast' for them, but after that she would never want to see them again. Notably, Argus did nothing to come to her defense. That night Ys started rummaging through Jezebeth's belongings (what else is there to do when they're already so mad at you?) while Windred kept an eye out for any spirits in the area. Whether summoned by Jezebeth's negative energy or no, a large spectral figure stood at the end of the road whispering menacing words of doom and corruption... 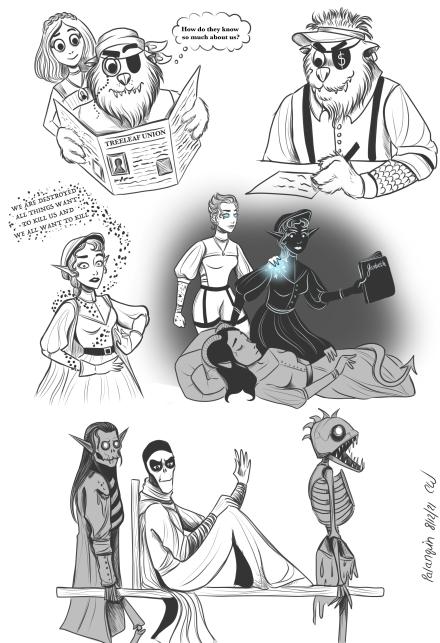