Beguiler is a mouse(!) capable of human speech and incredible arcane powers. Cheerful with a penchant for fresh fruits, he was hired to join the Gilded Hecat Guild by Kirby to help deal with staffing shortages in the winter of 918. Kirby insists that Beguiler is not a fairy, but even the lowest-leveled spellcaster could sense Beguiler's fey energy.   For a couple months Beguiler helped the Fortunate Five during their contract with Chusei University, plunging into the sewers of Sanjuro City to fight lizardfolk and befriending a flameskull on a stick named Thranoslav in the Koulan Forests. During the party's battle with the Gruumsh-worshiping Ownka Ramm in the first week of 919 Beguiler completed their mission for the mysterious Seeker and vanished from Ekal's plane of reality.    So many mouseteries remain unsolved. 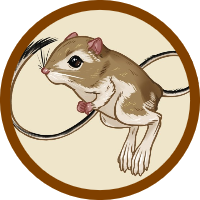