The Last Letter of Isadore

The last written words of a lost leader

The last letter Isadore Ravenswood ever wrote before he and the Court of Isadore mysteriously went missing in 1362 ADF. The letter is a very famous historical document in Dysvoll and especially in Kanden. The letter was penned with Isadore's well known pen called Mahla, the Eternal Fountain Pen.

The letter was reportedly found by citizens of Neklian when they finally ventured into Isadore's study, a few days after his disappearance.   The letter hadn't been delivered to the intended person and seems to have been written moments before something disturbed the leader and he promptly disappeared.
— Dysvollean Archeological Society

The Mystery of the Missing Leader

The letter's contents have nothing to do with his sudden and unexplained disappearance. It's simply a request for a Lavatory Cleaner to come and fix his lavatory, which was in a sorry state at the time. Many have found this letter to be quite comical later, calling it a comedic tragedy that these are known as his last written words. Especially because he was such an important and respected figure and many wished his last correspondence to be more refined or perhaps even mysterious.

Though the vast majority of people agree that the letter has nothing to do with Isadore's disappearance, some still insist on reading into the letter.   Some individuals do it to such a degree that they believe they find a connection between the disappearance and the contents of the document.

The Last Letter of Isadore 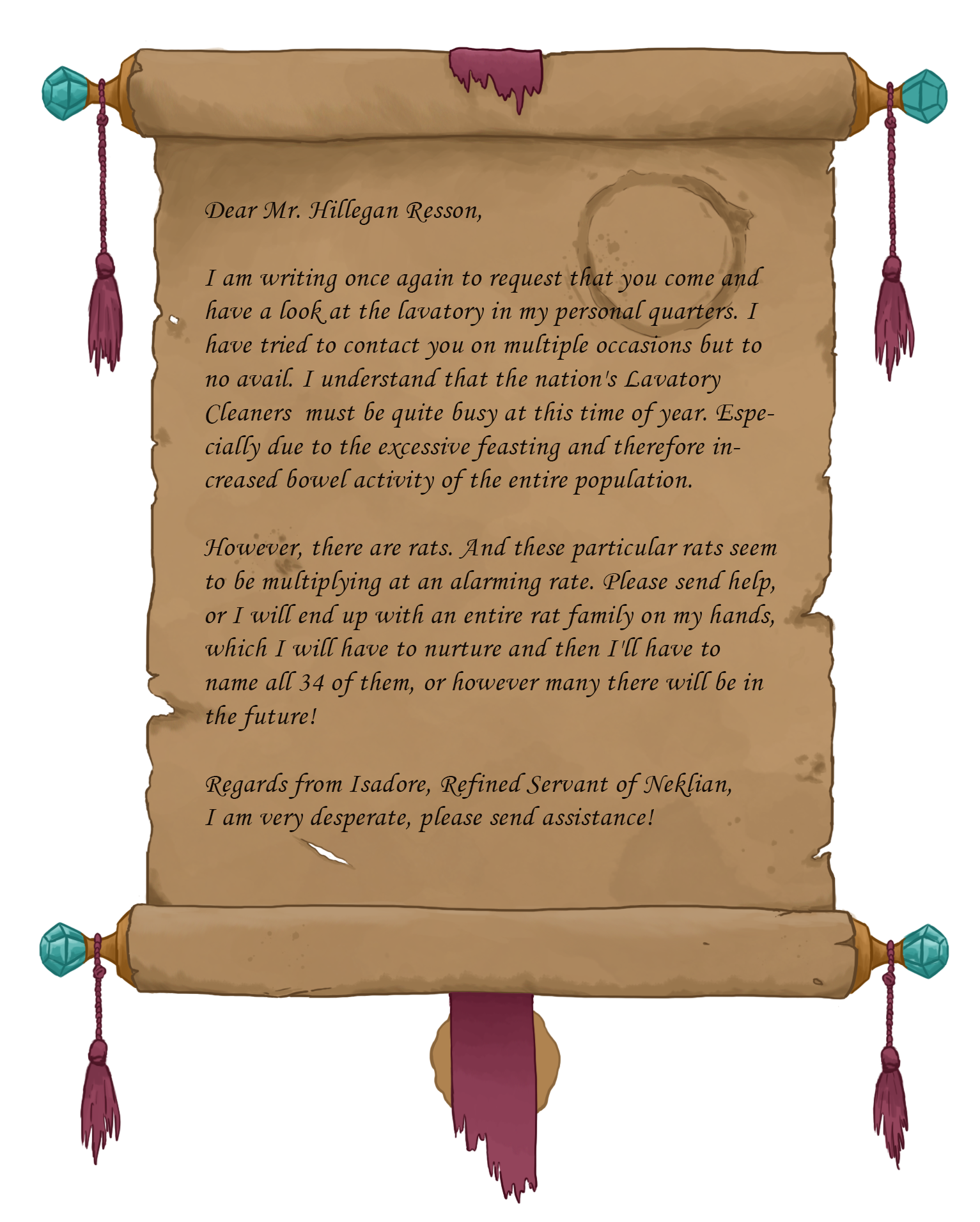 
Dear Mr. Hillegan Resson,   I am writing once again to request that you come and have a look at the lavatory in my personal quarters. I have tried to contact you on multiple occasions but to no avail. I understand that the nation's Lavatory Cleaners must be quite busy at this time of year. Especially due to the excessive feasting and therefore increased bowel activity of the entire population.   However, there are rats. And these particular rats seem to be multiplying at an alarming rate. Please send help, or I will end up with an entire rat family on my hands, which I will have to nurture and then I'll have to name all 34 of them, or however many there will be in the future!   Regards from Isadore, Refined Servant of Neklian, I am very desperate, please send assistance!
— transcript of letter

Vanishing of a Leader

A prophecy first told when Neklian was still in its earlier years, seen as fulfilled due to the vanishing of Isadore Ravenswood and his court.

Answering: "a famous letter or message"
Visit ninne124's Competition Page Check all other answers to this prompt Competition Homepage

ah yes, this sounds exactly like normal conspiracy theorists. latching on to things that probably mean nothing, but they might mean something :)

That letter is very charming! I loved the bit with naming the rat family members, and the assumption that the lavatory cleaner would be especially busy during the feasting season. I really like what I've read about Isadore Ravenswood so far. Great work!