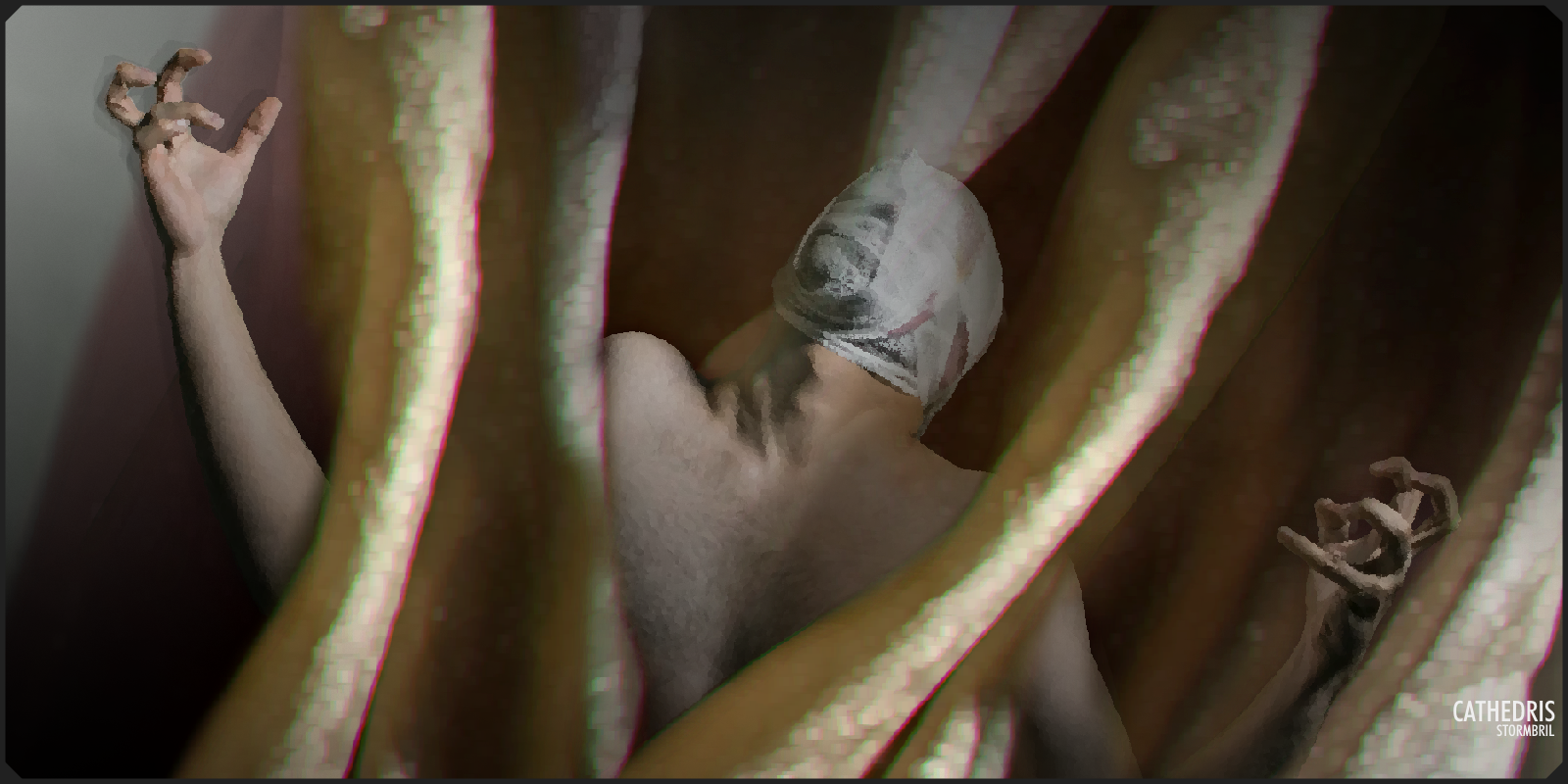 When memory of injury becomes physical once more

It starts with the big wounds -- bones begin to ache as fractures reform along the lines of past breaks. Skin seemingly unstitches itself across the lines of great old scars as your mind forces your body to relive all of its past physical trauma.
— Catalurgical Doctor

Catalurgy is not a safe art -- danger is a part of both becoming and remaining a Catalurgist. For Aural Catalurgists, who's powers are tied closely to emotions, there is one danger that stands above the rest; Psychosomatic Inversion, when trauma and fear take control of the body. Regular control and attention to emotions fade, as past hurt takes up all available mental capacity -- with the power of Ichor flowing through their veins, the Catalurgist's body begins to re-experience any and all past injuries.

Fear of the Past

When presented with the harsh realities of life, an Aural Catalurgist's controlled grip on their emotions may begin to falter. Doubt and fear may begin to creep in, and any pre-existing anxiety start to bloom. This on its own isn't enough to intiate a bout of Psychosomatic Inversion, however. It requires at least one fairly serious traumatic injury in someone's past for them to hyperfixate on to act as a seed for the disease to grow from -- things like broken legs or shattered bones, slashed throats or gaping wounds, and close calls with life-threatening diseases.

It's weaker now. I know it is. It never healed right. It's going to break again and then I'll never walk again and I'll be useless. They'll all leave me behind and I'll never catch up.
— Internal Despair

Psychosomatic Inversion is a relatively rare condition. While it afflicts the most common of the three types of Catalurgists, the relatively low number of Catalurgists compared to regular population numbers makes this disease quite uncommon to witness in daily life.
Prevalence
1 in 1,000


I don't know what's happening to me. These random scrapes and cuts keep appearing, and my arm is aching something fierce.
— Undiagnosed Individual

Beginning with quickly worsening anxiety, progressing towards aching bones and opening wounds, Psychosomatic Inversion takes roughly 1-3 months to run its course and result in the death of the afflicted Catalurgist.

After the initial bout of anxiety takes hold, the Catalurgist's magic begins to work against them. The early stages pass by quicky -- a few days of aching bones and aggravated patches of skin are all the warning someone gets before their body begins to relive past pain.   The order of which wounds begin to re-open and impact the patient again depends on both chronological order, and which ones take up the most memory in the patients mind. In most cases, the biggest or most fresh wounds are the ones that initially begin to re-appear. Gradually, should the patient still survive, attention will shift to older and older wounds, as decades old scars begin to unstitch themselves, and old broken bones begin to crumble.   After a month battling the disease, all sufferers of Psychosomatic Inversion take on the same tell-tale trait -- their eyes cloud over entirely, as decades of micro abrasions from rubbing their eyes all come back at once. The resulting patchwork of tiny scratches renders their lenses opaque, and the patient becomes effectively blind.
~

Should the disease be noticed early on, within the first few days, the Catalurgist may try to remove their intake of Catalurgy -- removing their source of Catalurgy, their mind will lack the power to make their past trauma real once more. However, this needs to be done slowly, as stopping the intake of Ichor too rapidly my cause horrific withdrawls.   Safer preventative measures include things like strong and consistent therapy to help the patient manage these feelings of fear and past pain. In some cases, crisis therapy can even be used to talk someone out of the very early stages of Psychosomatic Inversion, should it be properly diagnosed rather than dismisses as regular anxiety.
~

Once the disease itself takes hold, it becomes a game of treating the symptoms rather than the cause. As old wounds reappear, managing them is usually done with simple and non-invasive procedures, providing pain relief and heavy bandaging intended to halt bleeding rather than initiate a healing process. Once the patient reaches this point, the removal of Ichor is more of a death sentence than a saving grace, and should therapy fail, the goal becomes providing care to make the final two months as comfortable as possible.   However, In some very rare unconfirmed cases, some patients report being treated by a very skilled Transmutive Catalurgist with an incredible understanding of human emotions and the complexities of the mind. This talented individual is rumoured to have the ability to dampen emotions, in some cases removing them entirely, halting the progression of the disease.
~

If the afflicted Catalurgist survives the early blood loss associated with the re-opening of serious wounds and major trauma, they will live long enough to be taken by the buildup of old injuries and general organ failure as their body gives out.

Sometimes you hope it takes them early, so that they escape the agony of that comes with the final days of the disease.
— Catalurgic Doctor

An elusive Catalurgist with the ability to mend broken hearts and fix hurting minds.

When a Catalurgist does magic, Burn occurs. If they do this too long, attempt too much at once, or try something beyond their natural limits, this Burn may lead to Burnout.

huh, that's really not a nice condition. But I can very well imagine that this can happen. I mean, "normal people" often get traumas after serious injuries. With magic users, where emotions are involved, well, it's even more dangerous.   The only thing that seems a bit arbitrary to me is the blindness, I'm sure there would be other things, even if it's just the usual kitchen injuries, but otherwise it's really very nice and also well presented. An inspiring article.

Thank you so much!   I can see how you might think that regarding the blindness. I could probably help make it feel like it fits in more by going into more detail about how at the end stages of this illness, every single "injury" your body has ever felt comes back, no matter how minor. I just wanted to highlight the micro-scratches from rubbing eyes for particular effect :P

Having dealt with psychosomatic symptoms, this one hits quite hard. Makes me glad I don't have magic, haha.   The thing with the eyes is a perfect little touch. Horrifying.

Magic makes everything... worse? xD I hope I didn't push any descriptions too far, though!   Thank you so much for reading and for the comment :D

Suitably creepy. I especially like how "everyday injuries" come back to haunt you. This is like scurvy on overdrive combined with superaccelerated aging. :D

Thank you so much, and I'm glad you mentioned that! Scurvy served as the main inspiration behind this disease, it was so interesting to take it to some imagined maximums :D

So what you're saying is, if I want all my cool scars at once, I need to get this?

Hell yeah! The coolest scars are the freshest scars, anything from big giant shark attack wounds to those super neat cuts that happen when failing to open bananas