An Introduction to the Galaxy of Barren's End

Barrens' End    Primer      An Introduction to the Galaxy of Barren's End 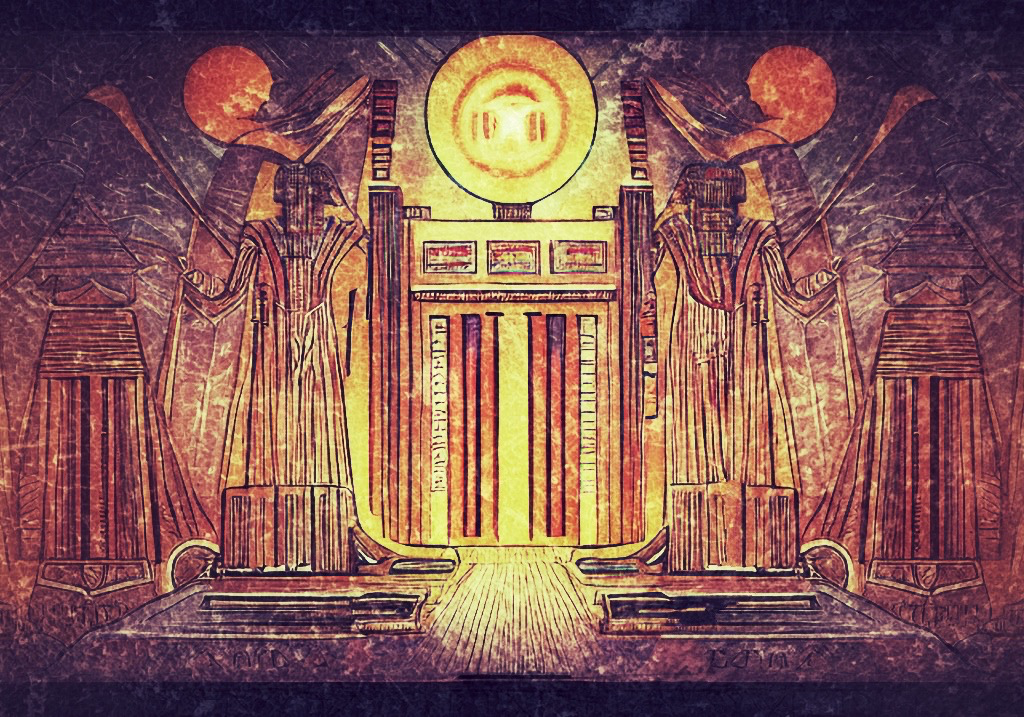 Rumors spread through the galaxy that the Hikara Tera have been seen again after going missing for millennia.   Kaiju have returned to Creth, Issumen, and Yar. Some say they are a sign the great old ones have awakened from their slumber.   The sign of the Blinded Sky marrs the   Star ships carry their passengers through the long night between the stars. Each vessel holds the hopes and ambitions of so many for a better life. No one risks the void for no reason.   While governments scheme for power, the corporations seek profit, and in the shadows, the sects of the underworld follow their own paths.   Whoever tells you they understand the competing whims of the peoples of the galaxy lies. Some seek the secrets of the ancients, while others develop the marvels of the future. Many struggle just to get by. As tragedy befalls some, glory shines on others.   In all things, the galaxy still turns. Servants ignore their masters. Power crumbles, falling like sand through arrogant fingers. Wildness frees many from their bondage. War and violence untethers anger and hate, rendering clean hands dirty. Those who speak with authority lack the convictions they preach, while the outlaws overflow with passion and vigor.   Too many believe they are powerless. Too many await a savior who will never come. Salvation is only in their hands. Yet, the rumors persist, and the prophets still proclaim the return of the Hikara Tera, the Temple of Light. “In the vast expanse of the galaxy, the old ones stir once again. Their vacant eyes stare into the blackness between the stars as they chant their ancient rimes. The void yawns with vacuous hunger. In their strange aeons of hidden slumber, they turned with nightmarish longing, seeking a return to power. In what form will their tyranny seep back into the galaxy?”   This is Our Solemn Hour.

This is a message to any survivors of the fall of the long night, in this our solemn hour, we must stand strong, else we may lose everything. The horrific explosion of An-mul devastated the entire solar system as one ancient terror awoke from his long imprisonment, broadcasting a call to all the terrors to return to the worlds they had long left in peace. The elders returned with their hordes of followers, swallowing armies and interstellar armadas, and despite our attempts to fight off the darkness, it has enveloped us all.   We must banish fear from our hearts and rise up against the threat of the elders. Terror and cowardice feed their lusts and drive them to spread their influence further. They can hide in wait anywhere, in our temples, on our streets, even the darkest night between the stars. Our vulnerability is their weakness. Without us, their power wanes. If we stand strong against the horrors they spawn, they will fall.   Only fools would deny the gravity of this hour. But even more foolish are those who cower before the elders or even submit to their will. They care nothing for us. We are minions at best, and food at worst. They care nothing for any of our wellbeing, prosperity, or future. An empty promise is no better than the worse and most vile betrayal. Be strong, my sisters and brothers, and put aside your petty differences and grievances.   The Ur-san have stood against this threat before, and again we rise in this hour to cast the elders back into the outer darkness they call home. No contribution or act of defiance against the elders, whether it is from the military, the Ur-san, or even a child who refuses to be afraid of the dark is too small. Collectively, our struggle wears against their will to power.   This war may have started in the ashes of An-uras, and from the rubble of that world, we have faced the apparitions of terror from system to system. Sekhet-Aaru, Khensu, and Maten may have fallen in the initial wave, and I am sure I speak for all the resistance members fighting on these and other worlds that we will overcome and turn back the elders in time. We have slowed the initial wave and it is only a matter of time before we drive them back.   Sisters and brothers, comfort yourself in the knowledge that you are not alone in the struggle. Your ordeal is united with the soldiers and Ur-san who fight on the Vanguard.

Night is Dark between the Stars

The Fall of the An-sarra

If the legends are to be believed, the galaxy once existed in a golden age. The An-ki, the proud empire of the An-sarra, ruled our corner of the galaxy in peace, with justice in their hearts. They brought prosperity and unity to the many worlds and species under their sphere of influence, sharing their culture, technology, and ethos with the less fortunate.   Such are the tales told on many worlds. History tells us a different story: one of conquest, greed, exploitation, war, and empire, but when have the facts ever gotten in the way of a good story.   From the time the An-sarra brought the first jump gate online in 904 BN, they spread into the galaxy, making alliances with who they could and conquering those who didn't join them willingly. Their hegemony over the galaxy faced many rivals over the centuries, but none were able to stand before the might of their military.   Their empire fell in one day.   No one knows the cause of the The Dark Nova. When An-mul exploded, it sent a shockwave through the gate system that knocked out every gate in existence and fried the computers tied into the network.   So many died there are no estimates of the losses. The entire population of An-uras died instantly, as did the crew and passengers of nearly every ship in the system. No one knows how many died in the ships trapped in hyperspace with no way to escape, or the ships that went offline in the expanse between the stars that weren't repaired before the loss of life support killed them all.   All of that pales to the number who lost their lives in the chaos, famine, and shortages that followed. Revolutions and civil wars burned the galaxy to ashes. Petty war lords and other opportunist fought against the few governments that managed to survive.

Rebuilding what was lost

In the power vacuum following the loss of the An-ki, the Shinari were the first to rebuild their gate. Another group, calling themselves [The Pharos], also began repairing the gates and establishing their own power base.   The Pharos started as a slave revolt that took over a single jump gate at Haraan, that spread from gate to gate as they united the former indentured servants and slaves who worked on the repair crews of the An-sarra. Over the years, the nature of the Pharos has changed. While little is known about their leadership, they continue to offer a path to power for any who join their company and who are willing to work.   While not an empire in the traditional sense, the Pharos' control over the vast majority of working jump gates grants them power beyond their size. They have worked hard to prevent others from successfully operating their own independent gates. From destroying Hyperion crops to sabotaging machinery, they seek to maintain a monopoly on hyperspace travel. Rumors persist of them hiring assassins to keep certain skills under their own control. Reportedly, they are behind the innuendo and suspicion that follows the Raewyn.   After all this time; many, if not most, of the jump gates are back online, but the fallout of the Dark Nova continues to this day.

Some take from others. They are thieves, bandits, and mercenaries. A thief steals for themselves. Bandits kill and rob. Mercenaries do the will of the highest bidder. Others develop themselves to bring glory to their own name. In the underworld, one is hard to tell apart from another.
-Mu Bhai Lien

In the power vacuum after the Dark Nova, the sects of the galactic underworld swept in quickly to seize power. Only a few openly took political power in the cities, nations, and worlds of the galaxy. Most chose the wise path of exercising their control from the shadows.   Even on worlds where the power structure recovered quickly, the underworld took root.   The Urugal originally spread before the Dark Nova, but in the aftermath outlaws, bandits, scoundrels, and mercenaries flooded into the network of safe houses and other systems put in place by Ur-san and Lu-gan.   Besides those outlaws, the underworld also houses the Gan-shar, The world of Cultivation, also known as the Gu-tir, Warrior Forest were heroes and adepts hone their skills for their own ends. While the various governments of the galaxy are not powerless before the underworld, none have been able to eradicate or remove it from their spheres of influence.   Most people live their lives unknowingly walking the line between the political authorities and the influence of the underworld. Stories, rumors, and legends rise into the public consciousness, but few understand the hidden world thriving along side them.

The Cosmos burns with Sacred Fire

Word has come to me that you are about to leave the safety of your home to enter the Gan Shar to seek your glory and fame. Be wary of the strange ways you will encounter in the galaxy.   Remember, the cosmos burns with a hallowed flame. In this blessed light, the awakened mind and consecrated life arise in every action and atom of the galaxy. Live according to the way, allowing the fire to warm your life and forge your spirit. If you turn from the way, the fire will scorch you and render you to ashes.   Since the Dark Nova threw us all into chaos, many have come and gone claiming to be the source of order we need to escape the turmoil that has always haunted the galaxy. Only in idealistic tales and propaganda has the maelstrom ever been calmed. Do not believe the lies of the power hungry who will try to rope you into slavery. We control none but ourselves. That is the Way of the Endless Flame.   Remember that even the children of the glorious empire that once ruled us all with an iron hand were as lost as the rest of us. Blind obedience to a leader, ideology, or legendary past bring more harm than they could ever compensate for. The cosmos burns. We chose how we can feed the fire or live with it, but no one has the power to quench these flames.   Not everything that's clean is pure, and not everything mired in grime is foul. Appearances are a mask. They do not reveal the essence of the thing itself. Only through continued cultivation of knowledge, wisdom, and compassion, can we see the world for what it is, rather than how other want us to see it.   There is good and evil, but only in the rarest and most unlikely circumstances are either developed and concentrated into an unadulterated form. Life is more complex than that.   The same power that strengthens our arts doesn't care about our loyalty or proficiency. Your strength is yours. That same power will work in your adversaries to defeat you. This is the Way of Endless Flames.   Above all, remember to vet your allies carefully and to keep your friends close to you. With them at your side, there is nothing to fear. All is as it always has been. So long as we do not add to the brokenness of the worlds and people we visit, all will be fine.   -Shepherd Naso