The Faceless, The Teacher and The Ever-Burning

As the sun rises everyday, so will it set. We will recognise the End when it comes, for the sun will rise no more, and all will fade without its light. But fret not! Deïmon is eternal, and tomorrow too she will rise for us.
— Priest of Deïmon during the solar eclipse of 176 I.A 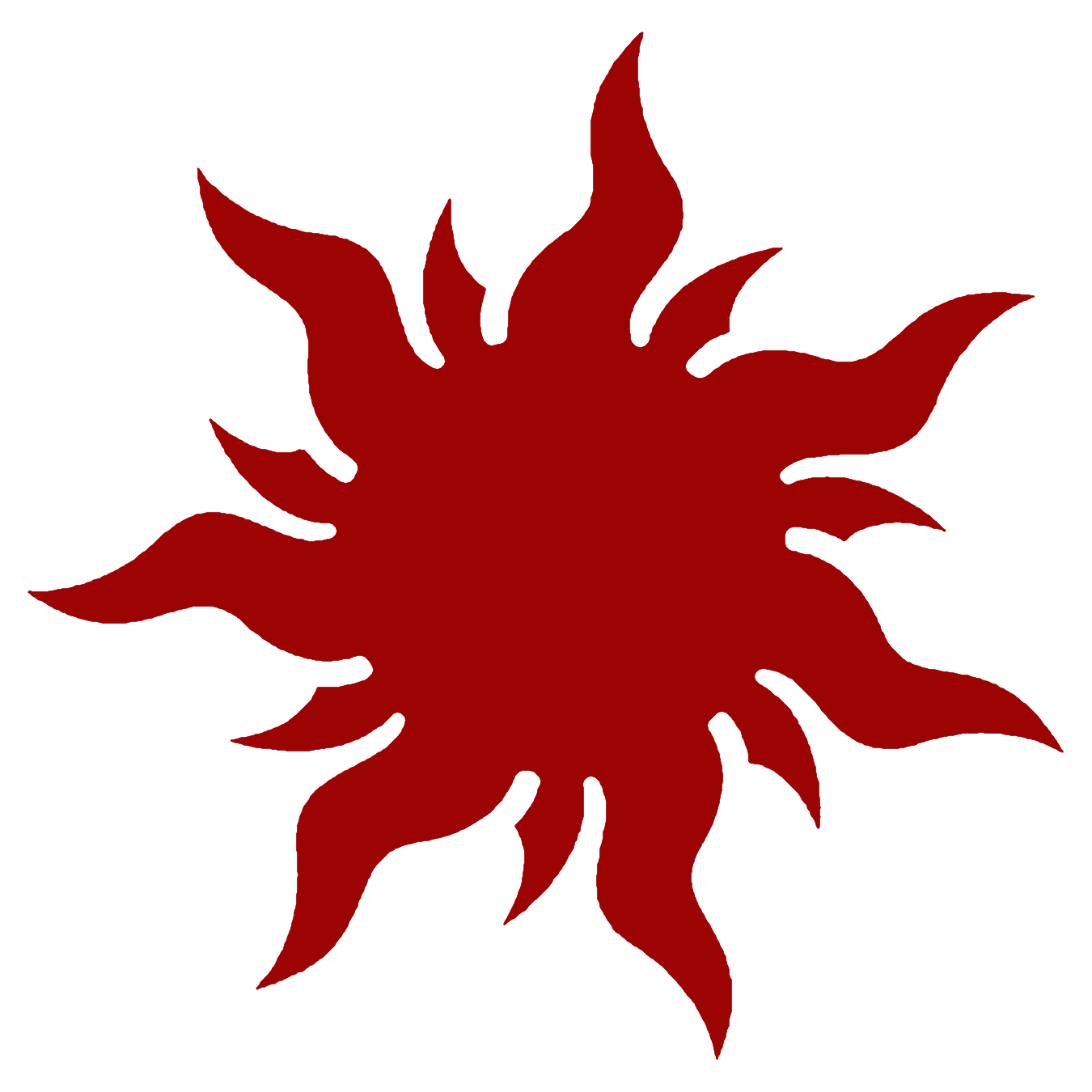 Deïmon is one of the seven major gods of the Saohri Temple, and is worshipped throughout the Danatelian Lands as the patron of farmers and artisans. In the Saohri mythos, it is said she is the one who showed mortals how to craft tools and work metal after they were banned from the Sea of Dusk, and the warmth of her light is what keeps them fed.

As all the other major Saohri gods, Deïmon has three recognised Adegho: the Faceless, the Teacher and the Ever-Burning. Each encompass a different aspect of the sun goddess, and are treated both as one unique individual and three seperate identities, sometimes even at odds with one another.

Deïmon, like most of the major gods in Saohri theologoy, was created by Matazel the Lonely at the dawn of time. He crafted her from his eyes, and brought her to life with his breath. He shrouded her body in a light so bright not even gods could gaze at her true form.

My child, to you I gift the love of mortals. They will follow your travel through the sky, and their lives will be centred around your every move.
— Matazel's first words to Deïmon, from the Creation of the World


Matazel then placed her in the sky, and instructed her to watch over the mortals he would later create. Under no circumstance was she allowed to descend from the heavens. Many stories tell of Deïmon's curiosity and disobedience, and the most famous of all tells the tale of how she snuck out of the Sea of Dusk one night to teach mortals how to weild fire.

She was rarely, if ever punished by Matazel, who had grown old and tired and cared little for his children, so long as order was kept.

Most myths and stories depict Deïmon as a loving caretaker who watches and dote on mortals. However, she is also known for her wrath, and acts as an executioner for the will of the Gods. A particularly brutal story describes how the Ever-Burning was sent out to destroy a village after its inhabitants had desecrated a temple of Samara the Enchantress.

You should never, ever invoke the true name of the Ever-burning, lest you wish for her to set her fire upon you.
— Wisdom of a priest

Apperance: Deïmon is typically depicted as a woman, shrouded in many robes and fabrics. She carries a veil that hides her face, as none can survive gazing at her, and carries a solar crown.

Domains: Light, Life (the Faceless), Forge (the Teacher), War and Death (the Ever-Burning)

Scriptures: there are no official scriptures in regards to the faith of Deïmon, though her Nasbarin have left many wisdoms behind. 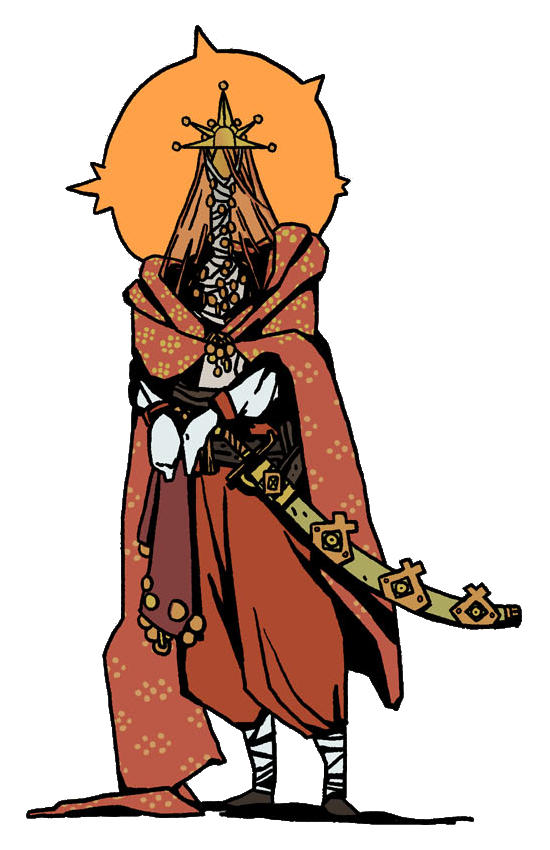 Deïmon the Faceless is the kind, caring guardian of mortals. She watches over them from the heavens, and brings warmth and food to them with her light. The Faceless is the very light that illuminates the world, and stories about the end of the world often state that the Sun will be the first to be swallowed by Almayot.

Deïmon the Teacher is the one who brought fire to mortals, and taught them how to craft from metal and leather. She is the patron of artisans and craftsman of all kind, from the smallest of smiths to the greatest of architects. It is said the Temple of the Million Years was built by an architect who had received guidance from the Teacher.

The Ever-Burning is a being of passion and anger, the raging war that tears across the world. This aspect of Deïmon is in a constant conflict with her other two sides, forever seeking to destroy what they create, to wreak havoc where they sowed peace. Her true name is kept secret among the highest of her clergy, out of fear some might use it to invoke her wrath on the world.

Most rituals in honour of the goddess celebrate two aspects of her Adegho: the Faceless, and the Teacher. The third Adegho of the Goddess, the Ever-Burning, is mostly feared and ignored by worshipers. Offerings of fresh fruits and bread are often made in her temples, in hopes of attracting the goddess's good favours, whilst daily prayers are held in various sanctuaries, praising the goddess and her graces. Deïmon the Bright is the patron of metal workers and farmers, of artisans and worksmen. She is most popular amongst the working class. 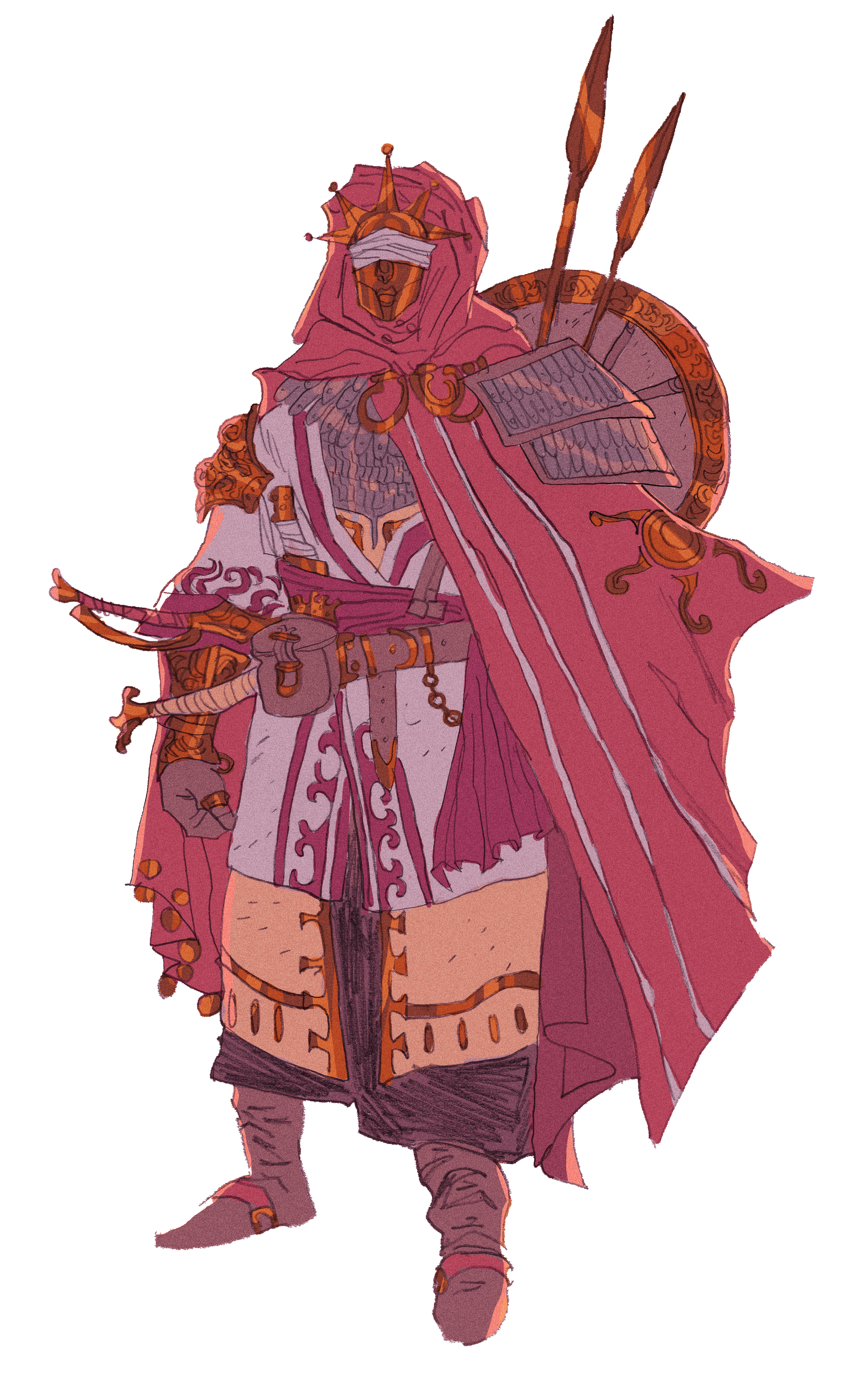 Most temples of Deïmon are large, polyvalent structures which also welcome markets and guilds, especially in smaller towns and villages. In Fleury, the largest temple of Deïmon is said to have been built by the goddess herself. It is an impressive and complex structure which predates the arrival of the Danatelians, and is likely of Baseikans origin.

Celebrations in honour of the goddess usually take place within the walls of a temple, where feasts and dancing will be held several times of the year to celebrate the Sun. The most important celebrations happen during the summer solstice, considered to be the day Deïmon was born on, and the spring equinox, which serves as a yearly harvest celebration.

Worship of the Ever-Burning

While most worshipers of Deïmon stear clear of the Ever-Burning, some instead turn to her in hopes of getting her blessings. Individuals with nothing to lose will sacrifice soul and sanity in exchange for power, so that they may accomplish whatever goals they set out to do.

Worship of the Ever-Burning in this capacity is strictly prohibited by the faith of Deïmon, and sternly looked down upon by most of the Danatelian Lands. However, in times of war all are quick to turn to the goddess who will fuel the rage of their warriors.

The Naar Iilhia are a group of warriors solely dedicated to the will of Deïmon the Bright. They get their powers from the Ever-Burning, and satisfy her thirst for blood by hunting and killing monsters of all kinds.
Saohri Gods

Aaand here we go, a big update! As I get the art I commissioned for my gods, I'm planning on doing some rewrites of all of them. Let me know what you think!

I love the myth of how fire was given to the humans by Deïmon. That gave me happy fuzzies. <3   As always, I love the three aspects all of the gods in this pantheon have. The last one frightens me, though. D:

Thank you! I'm glad you enjoy the three aspects of each god, I enjoy how it can create conflict between the same entities.

The concept of the Ever-Burning has given me chills. The very name just conjurs up an image of extreme power and awe. What a wonderful article!

Oooh thats great to hear :D! And thank you for the kind words :)!

Your focus on the aspects of the gods is wonderful. It just crystallized something I was figuring out with my own pantheons. But having different aspects of the same god is a tried and true mythological device that I'd forgotten. Thanks for the reminder!

Thank you so much for the kind words Kito! I'm glad I could help spark some inspiration for your own work :D

Lovely article and lovely deity! Gotta say I like the way you arrange information (totally not going to steal it for my own purposes) :D

Thank you very much! And feel free to steal whatever you want hahaha <3

I love the combination of her maternal, caretaker, teacher sides clashing against the rage and natural destructiveness of fire. All the art is beautiful as well.

Ayy, glad you like it! I definitely enjoy it when my divinities have contrasting but also complimentary aspects, really gives that "aah its all coming together" vibe