Ephany was raised by her Aunt Nissa and Uncle Orryn in a small farming community near Durnhollow. Her parents weren’t the settling down and raising a family type, they were travelers . Her Aunt and Uncle hadn’t been able to have children of their own so were happy to take Ephany in and raise her. Ephany would help out with chores in the home and on the farm and selling their produce in Durnhollow. There were lots of times Ephany would get into trouble for neglecting chores due to having her head in a book or daydreaming.   Her Aunt Nissa was a very capable, kind and warm person, and could turn her hand to anything - baking, home making, sewing and mending, farm chores, you name it and her Aunt would give it a go and show her how to do something once and she would remember and do it that way again. Ephany always admired her Aunt growing up, even during hard times she kept a sensible head on her shoulders and kept everything together. Ephany often wishes she was more like her Aunt and that she has paid more attention to the things her Aunt had tried to teach her growing up.   Her Uncle Orryn was a quiet, hard working man who in the evenings would tell Ephany tales - tales of legend, folk tales and family tales - which gave Ephany a love of stories and she would pour over books and try to write stories of her own.   Ephany often felt out of place among her peers but was often happy in her own company anyway. She did however become friends with some of the orphan children in Durnhollow and would visit them when she could and tell them stories she’d been writing or play the latest tune she had learned on her flute. She would also take them produce from the farm like eggs, milk, butter etc when she could.   Two orphan boys similar in age to Ephany eventually came to live on the farm with them as her Uncle Orryn needed more help running the farm. The eldest, a half elf named Toblen Graywind and the younger a human named Pip Thornton. Ephany got on well with both boys and they became very much like brothers to her.She would share her stories with them and they would act out scenes from tales of legend together when they had time to spare. As they grew older Pip became more interested in learning how to use a sword and to defend himself and when the Overwatch army came through town his head was turned and he joined up with them. Ephany had already seen a tendency in Pip to think himself better than herself and Toblen as he was human so she was disappointed but not surprised at him being drawn in by the Overwatch recruitment.   After many years of saving, Ephany made the very difficult decision of leaving the farm and her family behind to go to Donhurst to attend a school for bards to gain more bardic experience and to see the world. Toblen felt very grateful to Ephany’s family for taking him in and was very content to stay where he was helping to run the farm, he tried to convince Ephany to stay but her heart was set on experiencing the wide world at least for a time. She promised Toblen she would return and promised to write to him as often as she could do so, though she was determined to go it still broke her heart leaving Toblen behind.   She eventually met AvAlan and after some convincing, became the first member of his hunting guild. They headed toward Overwatch and on the way, ran into some new friends.
Show spoiler
Arc 1
While on their way to Overwatch, AvAlan and Ephany were attacked by a dire bear and fled for their lives. A group of adventurers intervened and helped kill the beast and the pair joined the party who were also traveling to Overwatch. After they arrived, they met the Queen, were given a house and shortly after took a mission that led them to Winterhaven.   Arc 2


Ephany spent the last 2 years with AvAlan and working on his social skills. More recently, they teamed back up with Eliwrath and new friends Calluna, Klara, and Marrek to get back on the road. Shortly after leaving Fairbay, Eliwrath contracted a life threatening disease causing the group to travel east through the Wastes and into Onak-Al.

The group made it to Onak-Al just in time to get Eliwrath cured. After their business there was concluded they made their way to Brightport where Ephany told the group she could not longer travel with them and needed to go back home.

As far as we know, Ephany should be living happily in Durnhollow. 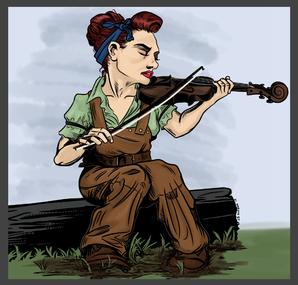