A Conscience is the Soul of a person donated to the Temple during the final days of their life. When the moment of death comes, the Saints-Servant in attendance takes the holy incense and captures the deceased’s spirit as it tries to flee its body. It is sealed away inside a vial, to prevent it from entering the afterlife. It is then forged into a tiny amulet, which can be inserted under the skin, just behind our ears. This helps it to fuse with our own shadows. They’re meant to help us make good decision and remind us not to make bad ones.
— Fyodor Ordesky, as quoted in The Sorrow of Souls, Book One: Harbinger

Emerging from the butchery of the Great Confiscation (850HE) and the savagery of the Hubraic Wars, humankind was weakened and jaded. They did not expect the revelations that surfaced with the Resurrection of the Throwbacks (7SGC). Having set out in some futile bid for revenge, desperate to slay the shameless hominids that had allowed countless generations of humans to worship them as deities, the Saeric people learned of the horrific realities that had unfolded in the Spiritual Realm. The Raven had overthrown the cthonic fertility godess, the Phoenix, and transformed Her kingdom into a pit of torment and torture. The Throwbacks warned mankind that the only chance they had of not falling into the Raven's clutches was to find a way to stop the Souls of their dead from leaving life.   Years passed. Countless Souls were loss to the talons of the Raven and His dread minions. Finally, a solution was discovered: not only was it possible to trap a Soul inside a tiny glass vial, but a human Soul could be fused with the Shadow of a living person, transforming the incoporeal mass into a sentient being. With that, the most important relic of the Raskvaerii Faith - the human Conscience - was borne.

"As is the right of all Kredasene, you have rejected the holiest gift any mortal can receive of the Saints: you have chosen not to welcome a Conscience into your shadow. Do you accept all this to be true?”

— Radimir Ekhorin and Chazley Dunheuvelin, as quoted in The Sorrow of Souls, Book One: Harbinger

The method of infusing a Reliquaried Soul into a Soul Chip is a closely-guarded secret. This knowledge is rumoured to be known only by a reclusive sect within the Mother Temple, whose name is not common knowledge even amongst the Saints-Servants. Conversely, the process of inserting a Soul Chip into the human body is fully understood and well-documented on the skin of the faithful themselves.   From the age of ten, children are expected to choose a Patron Saints, and welcome a Conscience into their Shadow. This surgical 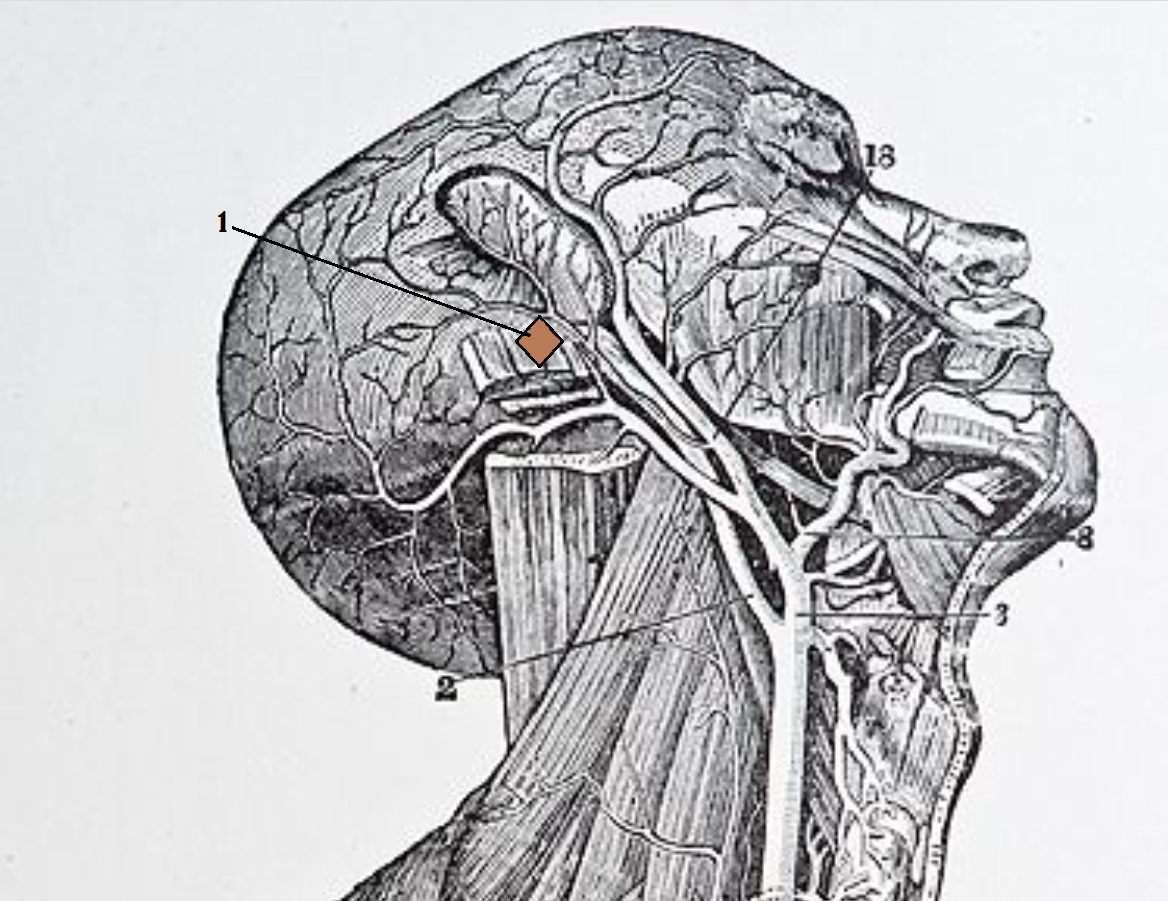 A diagram highlighting the customary place to embed a Conscience by Henry Gray (1872) editted by Caitlin Phillips
procedure is carried out under a general anesthetic either in the Mother Temple or other licensed, smaller temples. The Soul Chip is inserted under the skin behind the child's right ear. While the majoirty of these operations are carried out on children and adolescents, the expansion of the Raskvaeric Empire has prompted a rise in converts to the faith in the Holy Chorus of Saints. The welcoming of Conscience by adults and elders is now an accepted practice in the modern era. 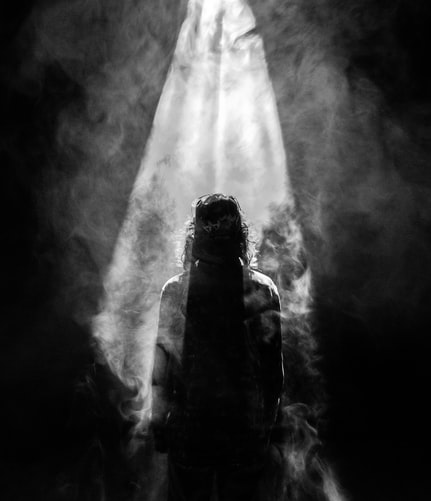 The process of fusing the Soul of an honoured dead with the shadow of a believer has a profound affect on the appearance of that person's shadow. The shadow is transformed from simply a dark area where light from any light source is blocked by the opaque object that is its master's body. Instead, the Shadow takes on the shape of its host's physical form. Its body is incorporeal and appears to be made from a dark mist, although none but the host can derive any sensation from attempting to touch the Shadow.

Consciences are devoid of facial features, including mouths, which makes it impossible for oral speech. For this reason, a formal sign language has been developed in order to allow Conscience to communicate with their hosts and others. This language is called Shadow Sign, and is generally believed to have been inspired by an early form of sign language used by deaf individuals in the Raskvaerii capital of Latharin at the start of the new era.   The impact of Shadow Sign is complex and, in some countries, problematic. On one hand, the widespread instruction in Shadow Sign across the Raskvaerii Empire has meant that communication barriers for people with various audiological conditions have been largely removed over the past two-hundred years. However, other Saeric countries have exprienced the sytematic supression of their native sign languages in favour of Shadow Sign. This is a point of bitter contention for these Saeric Deaf Cultures whose members do not worship the Holy Chorus of Saints, and do not want to use a language so heavily steeped in Raskvaerii culture and religion.

"Ripping Out" a Soul Chip

Tradition / Ritual | Dec 24, 2020
Conscience
In response to the prompt Describe an invention in your world that helps people with disabilities.
The Sorrow of Souls Quartet © Caitlin Phillips 2020
Images © Caitlin Phillips, unless otherwise stated
Default cover image by Michael Schaffler at Unsplash

Is it wrong that I find Consciences to be creepy? I do not like the idea of a sapient being living in my shadow. D: The bit about Shadow Sign is really interesting - I'm looking forward to reading more about that.

Nope, I think that's a totally fair assessment. I haven't mentioned the fact that they can be dismissed and summoned by their host, so I'll have to go in and add that in later.   I'm looking forward to writing about Shadow Sign! There's so much to wriiiiite!

Oh man, this is EXCITING. And almost immediately I'm struck with so many questions. I worry about the consequences of two sentiences within the same host--who gets to choose what's for dinner this week? What if they're EVIL? Can you illegally get more than one chip? Is that what's happened to me when all of my characters talk at me at once? XD Very cool concept, and I look forward to MORE!

Dani, thank you so much for you feedback! These questions are so exciting! :D This is definitely an article I'll be coming back and adding to in the future. I've never considered if a person could illegally have two chips, but I certainly know there is a fraudulent scheme were criminals try to convince people that they can illegally make their loved one's Souls into Soul chips.

What a cool concept. If I understood it correctly, in the modern era people of this faith get their conscience very early in their life and it is generally acceptable to perform this practice on children. Are consciences soemwhat viewn as a creepy aspect by those, that don't have onee? Due to ther shape of the shadow they're rather easy to find. And: The consciences are said to help making good decisions. Are they always good? Is there some process to make sure that the donated soul was a good one? Or do bad things happen from time to time? (Not wanting to be critical, I just like the concept and am wondering how it works :D)

Thank you so much for your comment! Consciences are definitely viewed as super creepy by those who don't subscribe to the faith in the Holy Chorus of Saints, even those technically under the control of the empire.   I personally think of Consciences as being morally grey. There's no particular 'cleansing' ritual to make them something other than a human soul, so they're still susceptible to making bad decisions on behalf of their hosts. I think there IS a process of making sure Souls are 'good' (they're referred to as the Honoured Dead), but in the modenr era, I reckon money and corruption probably plays a part, too. There are definitely newer and older Soul Chips in circulation.   Consciences can be summoned and dismissed by their hosts, although they can exert themselves into life (manifest themselves) if they feel their host needs them. They are very atuned to their hosts emotions.

Oh wow, that is a really reaaaally interesting piece of lore, and very creepy too. Is there a limit to how many consciences a person can have? And what happens when someone with a conscience dies, do they have to catch both souls? Also, I'm very much looking forward to reading an article which outlines the major aspects of the Holy Chorus of Saints ^^, great article!

These are awesome questions! Nope, so when someone dies, their Conscience is already contained in the Soul Chip, It has to be physically removed from the deceased, and there's a little ritual involving extraction where the Saints-Servants thank the Conscience for their service. The Soul of the deceased will try to depart the body as soon as the person dies, so it's incredibly important for a trained Saints-Servant to be on hand to catch/reliquary a Soul. It's not a precise science, and families do try to provide 'safe areas' for the Souls to hide. (But this is the topic of a different article I've yet to write!)   I... had never considered anyone wanting to have more than a single Conscience before. I reckon people have probably tried; they'd have to vie for control of the host's Shadow. :)

Most of my questions have already been asked, but here's another one for you: could this be seen as a treatment to help those with anxiety or depression? The addition of a soul that can console them, help them take care of themselves, etc? Very interested to learn more!

TThank you so much for this question! I'd never considered a Conscience being seen as a treatment for anxiety or depression, but as they are often described as counsellors and companions to the living, it could definitely work. I think a Conscience would definitely help with my anxiety and depression - especially as they are very strongly linked to their host's emotions, so would be able to offer assistance and guidance and support when they notice something is wrong. They can't physically help their hosts, but they can encourage them and be a source of comfort. :)