The Morning Realm    Library    Calendar    Weekdays      Launderday
Launderday is the sixth day of the week between Fairday and Sunday. The name is derived from "Launder Day", meaning the day for laundering or cleaning. In Storest, Launderday is also known as Moot day, and is the day for voting.

Marketday is one of the weekdays that reflect the values of the Argosian Empire. While standardization was the primary goal of Viktus' Calendar, there was a clear attempt to guide the masses to what he considered a wholesome life. The early pamphlets and annuals disemminated by the Argosian government make no attempt to hide this.   In the Citizens Guide to Household Management, an annual made in collaboration with the Guild of Domestics, Launderday is intended to be set aside for cleaning and laundry.

Numbered Days of the Week

The Dwarven Languages chooses to use numbered weekdays instead. Historically they would begin the week on Sunday, but only the northern languages, and most notably Sirenic continue this practice to this day. In Sirenic, the day is called έβδομη (c: Évdomi) or 'the Seventh Day'.   In Storan however, it is called Sexta, the sixth day.

Only the Low Elven languages use a similar week structure to the Argosian Calendar, as High Elven instead uses the High Elven Calendar. In an attempt to merge both worlds, the Low Elven calendar adopts the weekdays from the elven calendar and retrofits it to the Imperial Week. Launderday is called Décroîdis or Descentday after the Waning Moon. 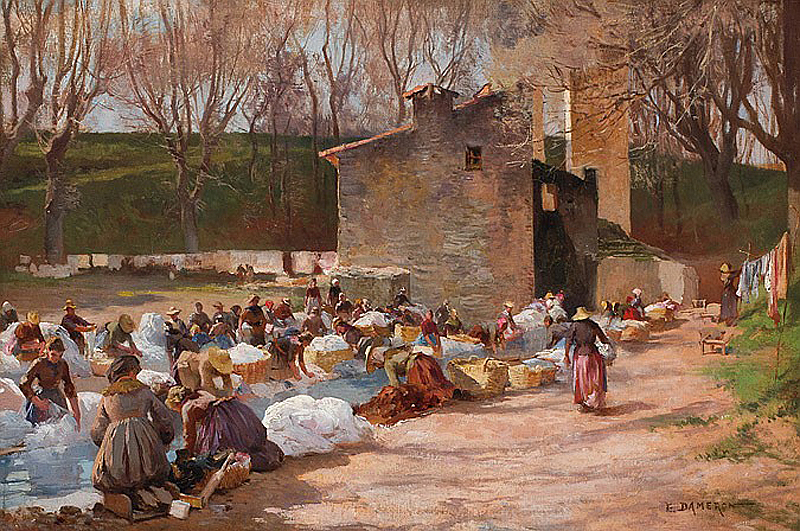 The Washery by Emile Charles Dameron