One of the more infamous vessels roaming the Crescent Sea, the Crusty Sailor is a ship whose history goes far with the open sea. Having fought in many naval battles, it withstood many thanks to its unusual method of transportation.

Owned by Elisabeth Saltfroid VII and her Crust Crew, its strength comes from the giant crustacean that carries it on its back. Together with the chaotic tactics of its captain, it makes for a formidable foe when confronted on the waves.

A three-masted ship built to support an average crew with a few passengers, the CC Crusty Sailor is far from a large vessel. But for its purpose as a pirate ship, it provides enough firepower and mobility to get around the Crescent Sea with ease.

Its major strength is its mobility, providing good manoeuvrability amidst naval battles. Combined with the twelve cannons on board, it has enough firepower to take down most ships.

The lower decks are where most of the crewmates sleep when they aren’t busy on the deck itself. A snug fit for most with little headspace, it acts more so as storage than any living space. Here, one might find food, supplies, cannonballs and more.

The captain’s quarters is where Elisabeth keeps her belongings, roomier than the rest of the ship. Sleeping on a hanging mat, it also has a large chest with the captain's personal belongings. But none of the crew are dumb enough to learn what is in there.

What makes the CC crusty Sailor stand is its trusted animal companion: Jeremy. A Goliath Crab a few centuries old and with several tons of muscle, able to carry the ship on its back.

While it makes the ship an easier target for cannon fire, Jeremy also provides extra manoeuvrability. Alongside his powerful claws, it helps turn many battles in the crew’s favour.

To secure the ship onto Jeremy’s backside, he wears a large harness that locks into the hull. By diving under the ship, the ship’s weight causes mechanisms to lock it at its sides, reinforced through the aid of the crew. Such manoeuvres often only take five minutes to do.

Thanks to this, the ship can interlock with Jeremy whenever, even admits some battles. Although one needs to be careful with the technique, as going too fast might damage the mechanisms while docking. Hence why the progress can make the ship somewhat of a sitting duck.

The Life of the Crusty Sailor

Elisabeth Saltfroid III earned the Crusty Sailor in a drinking contest with a fellow pirate. It is lost to time who exactly, but stories depict it as one of her many rivals.

Modifications and total overhauls shifted the ship’s design to keep up with modern ones. The only things that remained were its three-mast design and the number of cannons it had. Across three generations, it never sunk in battle, even if other vessels improved.

That was until one unfortunate night Elisabeth Saltfroid V lost a battle at sea against another pirate vessel. Trapped under the rubble of her ship, she sunk into the depths, presumed to be dead... Only for a Goliath Crab to emerge beneath the sinking vessel.

As the other vessel was in shock, she used the surprise aid to pretend to be a ghost, cursing the others. With it, they fled overboard, leaving behind the other vessel with all its supplies and treasures. All of which helped Elisabeth recover and examine the situation.

She lured the crab towards the shoreline put the ship on shore, rewarding it with some food on board both vessels. But while she was recovering at the shore until she could hit the mainland, the Goliath Crab returned, making her choose to name it Jeremy.

Jeremy is a gentle but territorial soul. If he doesn’t like you, you need to be patient. It might take some time before he gets accustomed to your smell.
— Elisabeth Saltfroid VI

Seeing an opportunity, she trained Jeremy to do her bidding, forming a close bond with the crustacean. Once she got the Crusty Sailor fixed, she used the vessel together with Jeremy in creative methods. One involves stranding enemy ships onto Jeremy’s back for easy access, or even tipping them this way before the enemy could react.

Only when her daughter got her hands on the vessel did the harness come into existence. Thanks to Jeremy, it allowed her to make the vessel extra mobile in combat. Perfecting it through a few incarnations, leading to the current incarnation of the CC Crusty Sailor.

The vessel excels at close-quarter combat more than anything, but also for unorthodox tactics. Thanks to a combination of Elisabeth Saltfroid VII's crazy leadership and Jeremy’s sheer strength, it allows for strategies other ships can’t.

If separated, it can allow both ship and crustacean to work as individuals and disrupt attention in battle. Jeremy can attack a vessel up close, while the Crusty Sailor provides cannon fire from afar. As a result, focusing on a single enemy becomes impossible.

Once interlocked though the ship’s tactics get hectic. The added mobility allows the ship to make evasive manoeuvres others can’t, including moving on land. One tactic is to even tilt the entire ship, allowing for cannons to fire in an arc and reach further vessels.

It also provides a danger zone for any ship getting too close, as Jeremy’s claws keep most at bay. If even needed, he can even spit water towards an enemy vessel, drowning the deck in seawater.

As a result, the ship is practically hard to fight unless one can snipe it from afar. And how unpredictable the Crescent Captain's tactics can make it only harder. 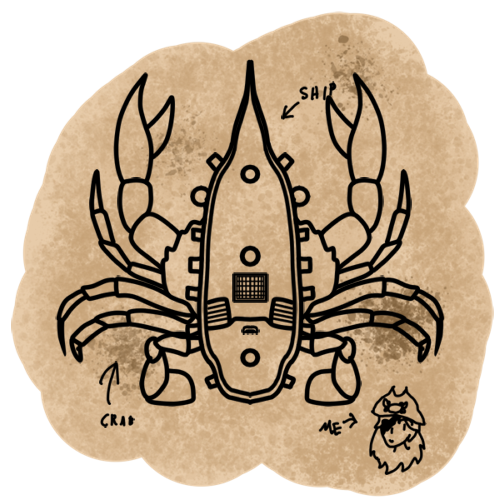 Good article! Jeremy the Crab is the best!

This really is a wicked article, I like how Jeremy's been around for 3 generations already.

This is a great concept. Jeremy sounds awesome!

Very original idea and a fun to read article. A nice opening quote as well, I would indeed not have suspected the water cannon :p

The new crewmate refers to Jeremy, but I can understand the confusion. Glad you like it!