Blue, not her real name has lived on Daxu all her life having been brought there from Leonis, her father was accused of criminal negligence and sentenced to criminal status in the lower city or transportation to Daxu as a colonist, he chose the latter.   Upon coming of age she realised that her family had been branded criminals so she might as well act the part, she began hanging around some of the seedier parts of Jadetown and learned how to hack the InterFleck through observing other hackers. At age 105 she stole her first Deck and used that to stage an attack on a supermarket, this released the locks in the building allowing some poor families to sneak in and steal copious amounts of food.   At 134 she executed an ill-fated raid on a fighting pit run by the Hounds she was trying to release the captive fighters whom were there against there will, the raid went wrong and she was caught, she was viciously beaten and left in a hospital for weeks. She vowed to create a crew to assist her and thus the Eels were born.

Quite lean even for an Elf she favours the colour blue, her hair is blue, eyes blue by implant, all tattoos are blue.

Pale white which highlights the Blue of her tattoos more.

Many tattoos of Eels and fish up her arms.

Always carries a hacking deck with her in a satchel bag, typically wears blue leggings and a bomber jacket done up all the way.

Has a small taser concealed in her ring on her left hand.

Leader of The Electric Eels gang on Daxu.

One bad raid has left her over cautious and with a hatred of physical violence.

The bad raid mentioned above ended with her being seriously injured after being captured and tortured. She now plans all raids to the Nth degree and has not suffered a failure like this since.

An expert hacker she is able to intuitively grasp unknown code on the Fleck system and utilize it ingeniously to force her way through firewalls and security.

The job has to be done, so people can get paid. People need to be paid to eat and survive. 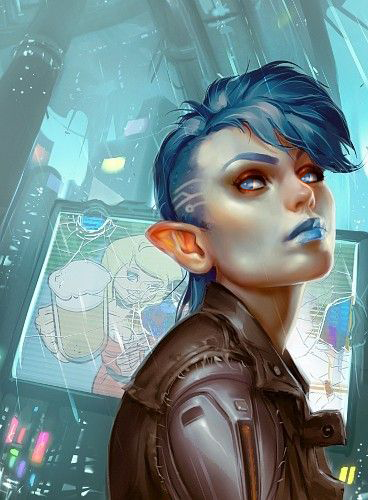