On the 28th of Flowers, 11th year of Awakening, a mysterious note has been posted and spread around the few largest cities of The Pit. 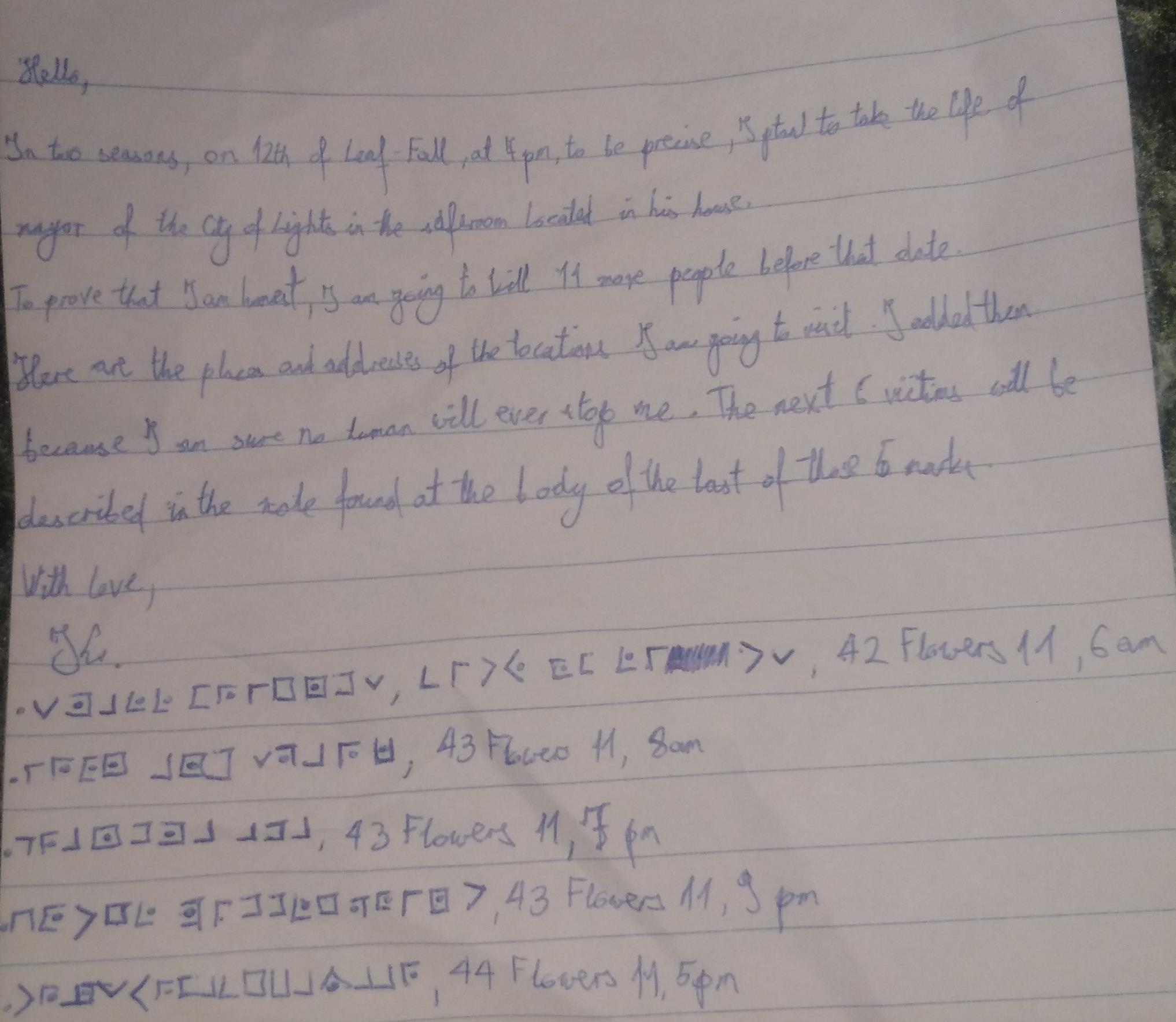 by Revyera
Transcript of the note

Hello,
In two seasons, on 12th of Leaf-Fall, at 7pm, to be precise, I plan to take the life of mayor of the City of Lights in the saferoom located in his house.
To prove that I am honest, I am going to kill 11 more people before that date.
Here are the places and addresses of the locations I am going to visit. I added them because I am sure no human will ever be able to stop me. The next 6 victims will be described in the note found at the body of the last of those 5 marks.
With love,
K.

It was quickly discovered that the pigpen cipher has been used to encrypt it. Deciphered, it revealed the locations of potential murder:
At first, the police departments and security of the cities decided to ignore the warning, seeing it only as a tasteless prank. But it all changed when on the 12th of Flowers, the first victim was located, both in the place and at the time described in the note.

According to the note from K, the workers entering the factory on the 42nd of flowers were greeted by a grizzly sight of mutilated corpse laying on one of the conveyor belts.
Owners of the targeted businesses and local security and police departments have been warned.
And yet, other people died, exactly at the time described. Somehow, without any witnesses or trace.
Even the schedule looked wrong. Someone planning to kill in those locations at exact hours wouldn't have time to sleep or eat. They would have to be on the road day and night. Unless they had an accomplice. Still, all of The Tram Lines have been heavily monitored for any suspicious movement.

According to the autopsy reports, all of the victims suffered multiple stab wounds to the chest. Additionally, every one of them but the last one had letter "K" carved out somewhere on their body (5 times the sign was located on the face of the victim, 3 times in the chest area, 2 times on arms and once on their legs).   There are no signs of struggle or shock on any of the bodies, suggesting that even those prepared to fight off the assailant were killed without a moment to react. 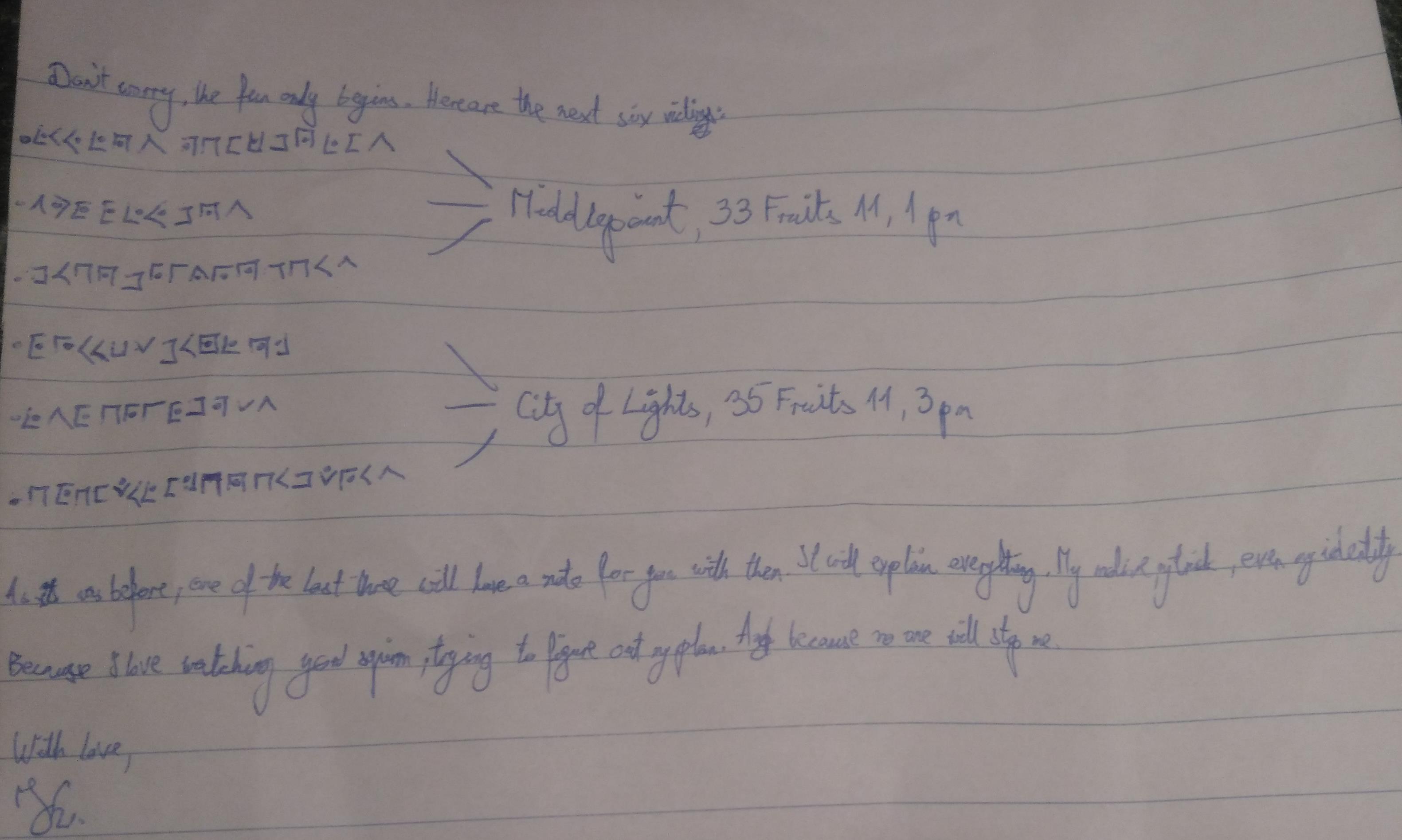 by Revyera
Transcript of the second note

Don't worry, the fun only begins. Here are the next six victims:
As it was before, one of the last three will have a note for you with them. It will explain everything. My motive, my trick, even my identity.
Because I love watching you squirm, trying to figure out my plan. And because no one will stop me.
With love,
K.

This time, apart from the pigpen cipher, Ceasar cipher (with a shift of 3) also has been used.
According to the second note, the first three murders would take the place at the same time in various parts of the City of Middlepoint. The second three, in the City of Lights. This information confirmed the worst fears. K wasn't an individual, but a group working together.

At the same time

The forces of Middlepoint and City of Light's security and police departments were spread out all over the settlements. Cameras and infrared sensors have been placed at all of the six locations. Still, it wasn't enough.   Both on 33rd and 35th, exactly at the designated time, fresh corpses were found at described locations.

During the investigation of one of the last of the corpses, as described in the second note from the killer, a paper has been found, forced into the palm of the culprit. It contained a single, unciphered message:

As soon as the chief of police of the City of Lights' Police Department has been informed of this, a group of 15 officers has been dispatched to check the said area.   According to their reports, while getting closer to the alley, a few of them spotted a mysterious man, covered completely in black clothes. One of the officers describes that the individual tried to escape the area with a small piece of paper in his hand.   Officers began the chase, however, they lost the suspect in the labyrinth of alleyways and the crowd of the city.   The identity of the suspect remains to be unknown.
It is also unknown if the piece of the paper they were carrying were K's third note.   Said note, the one that was supposed to reveal killer's method of acting and his true identity, has never been found. The black box was empty

According to the staff of the house, mayor of the City of Lights has fled the city a week before the deadline of his life. Every one of them has been paid a significant sum to keep his absence a secret.
Still, the amount of guards and monitoring devices has been tripled.   The day of the appointed murder has come. A few minutes after the designated time, one of the maids of the house noticed a red mark on one of the furniture. It was blood, and more marks were leading somewhere farther. She called the guards, and together they followed the trail.   It has led them to the mayor's saferoom. Inside, his mutilated body has been found. K managed to kill his 12th victim.

Due to the lack of any further evidence, K's murders have been deemed a cold case.   CoP of City of Light's Police Department resigned and retired.
People of the City of Lights have appointed a new mayor, a man who spares no expenses on his security.   Spider, the main suspect of the crime, continues his activity, remaining to be caught for numerous other crimes that could be proven.
Some of the businesses that belonged to victims have been closed or found new owners, a few copycat murderers showed up, and many more amateur "investigators" tried to solve the case.
But in the end, 3 years later, the life in The Pit remains unchanged for the common folk.
Once in a while, someone talks about the case but only in the form of a rumor passed in an inn.

At first, authorities tried to cover up the murders but when they hit the wall, lacking any evidence to progress, they decided to make it public, hoping that someone would be able to offer any type of useful information.

While inspecting the notes, one of the investigators decided to find the pen used by K to write the notes, especially after discovering that all of them have been written using the same unit.
Sadly, the search has been proven fruitless as the trail led to the automatic factory of pens located on the Layer of Factories.

"The boss is pissed. Someone's been killing on his turf."
— An anonymous member of Spider's gang.

One of the main suspects of the crime, an individual known in The Pit as The Spider, an infamous gang lord, and informant, offered both his resources and his best men to help catch the culprit and decipher their messages.

Besides the markings left on the bodies of the victims, all of them had a piece of paper left somewhere besides their corpse, each with a single symbol on one side and a letter "K" on the other.
As it was with all of the notes coming from K, a pigpen cipher has been used to encrypt them.
Not knowing the second cipher used, the right language or the right order of those 11 letters, the message hasn't been decrypted.

Months after the killings have stopped, a mysterious occurrence has been noticed on the tapes recorded during one of the murders.
Said tape has been recorded in Sullivan's butcher shop, a property that belonged to the 7th victim. Spider himself decided to watch the safety of Mr. Sullivan, swearing on their long-term friendship.
Knowing his reputation, Mr. Sullivan agreed without any objections.

"If Mr. Spider himself won't be able to protect me, I don't know who would be able to do it."

At first, the tape shows their lively conversation that day. However, as the hour at which the murderer was supposed to show himself approached, their chat stopped altogether.
Then, a mysterious thing happens 10 minutes before the horrendous event. For an unknown reason, Spider turns his head rapidly only for it to return to its initial place a second later. According to specialists, that moment looks as if it was edited, however, no evidence of splicing has ever been found.   After the incident, Spider withdrew his help, funds, and resources. Asked about his reasons, his only response was:

Cover image: Call of the Tree by Revyera

Very creepy, and very well done! I really love all the effort put in to this with the hand-written notes and everything. That bit on the sidebar about Spider rapidly turning his head to the side, then back a moment later, is very spooky. I like the way the main body of this was laid out! It was hard for me to turn away, because each section led into the next one perfectly, and I was hooked.   Well done with this!

Glad to hear you liked it!

Excellent work rev. loved the effort you put into those notes and the symbols, plus the description of the finer points of the case. It really looks like you went all out here. You walk us through the evidence and the connection with the spider beautifully and those quotes have such a great effect when your reading through. Great work.

Very well done! It unfolds like a murder mystery, but then you also threw in some bits that almost feel supernatural... But leave just enough doubt as to whether it's natural or supernatural, to keep the whole tale feeling creepy. I love it.

Thank you very much! :D

This is a great read, I really enjoy the hand-made props for the piece too. That's a nice extra