Began exploring the maze between floors 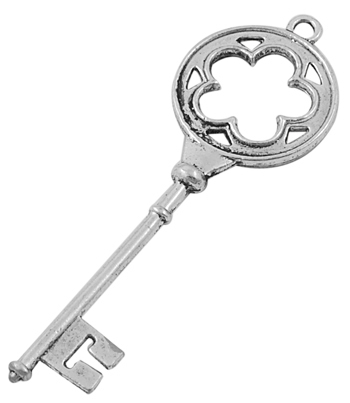 Hänge Nyckel Tibetsilver 77,5x26mm by Jiska Design
Opal and Xora had continued down their hallway, finding a few red potions and a small vial of glowing blue liquid. They found themselves in a small open area with an open door infront of them, and a closed door to their right. Xora looked through the open door, into the gloom, and saw a thin clockwork with 4 arms on standby mode in the center of the room. It was wearing mage's attire, and hadnt noticed them yet. As they stood there discussing what to do next, Tiddles and Ryder were making their way back up the hallway.   Climbing back through the rockslide, Tiddles deftly made his way through. But Ryder, attempting to copy Tiddles, found himself stuck and hurt by the rocks. Coughing from his repeat attempts to free himself, he called for help. Tiddles came back and grabbed Ryder by the arm, and pulled him out.   "-COUGH HACK- Tha -COUGH- nks.." sputtered Ryder. He sat down for a breather, and scribbled 'practice rock climbing' into his notebook.   Tiddles jogged forward and went down the same path as Opal and Xora. The two women frantically waved their hands at Tiddles to signal quiet.   "WHaaat?" Whispered Tiddles hoarsely "I cant hear you"   He came closer, until Opal and Xora were close enough to angrily whisper back "shhhh! There's some sort of clockwork mage up ahead!"   The 3 of them proceeded down the hallway, with Xora taking the lead. They all listened carefully, with Tiddles hearing what appeared to be synchronized ticking coming from behind the closed door to their right. Ryder, having caught his breath, caught up. They filled him in on the situation, as Xora, in range of the clockwork mage, decided to take her chance and execute a surprise attack. She stepped up and whipped her chakram straight at the clockwork mage. It hit once, appeared back in her hand, and then she threw it again. However with both throws, the chakram bounced harmlessly off of armor plating.   The clockwork mage activated, snapping out of standby mode. It pointed one of it's arms at what it could see, which was Tiddles, Xora, and Ryder. A white sticky web streaked towards them, and coated the area in webbing, even catching Opal in it. Xora and Opal were too deft for the webs, and avoided being caught. Tiddles and Ryder were caught completely off guard, and stumbled on their own two feet, becoming hopelessly entangled.   Xora, fearing she had awoken something too strong to handle, attempted to strike it twice more again. However the clockwork deftly dodged and avoided the attacks, thanks to it's magical enhancements. The clockwork retaliated by firing another spell into the midst of the 4 of them, bringing out a noxious cloud of green vapour. Everyone other than Ryder demonstrated strong fortitude by being unaffected by the smell. However, Ryder quickly became nauseous as he found himself breathing horrible fumes while trapped in a web.   The smell of the green cloud wafted down the hallway, but the twists and turns and doors were enough to stop it from drifting too far.   As Rusticus and Naro explored, they were unable to smell or hear the combat south of them at all. Testing out the key given to him by Rusticus, Naro opened the large metal door. The key slid smoothly into the lock. When he pulled the key out, unknown to Naro, they key was weakened. Inside they found a room with a large wooden desk with one drawer, and two doors to the south. Naro went to look at the desk, and found an array of tools laid out extremely neatly. Each tool had it's place. There was wrenches, hammers, drivers, and a set of what appeared to be oversized clockmakers tools. Noting this, Naro then opened the drawer. He took a good long look inside, seeing page after page of scantily clad lady gnomes. He looked at Rusticus, and said "We did NOT need to see that. This more your thing?"   Rusticus replied "I FUCKING HATE GNOMES"   Naro closed the drawer, as Rusticus began bundling all the tools up. His insatiable lust for loot would not be stymied by gnomes, nor by the weight of all the tools. Carefully wrapping them in a cloth, and stuffing them in his bag, he continued to check a door to the south. He barged through it, and saw a small clockwork winged creature floating in the air. Reacting quickly, he bashed it out of the air with his hammer, causing it to explode in a shower of metal parts on the ground.   "The fuck was that?" Asked Naro as he followed Rusticus around the corner. The dwarf turned and replied "Oh, nothing, just smashed a thing". The duo continued along the hall, finding themselves in another room with what appeared to be a collapsed entrance. Beside it, there was a sign in board, and another poster that said "Days without a workplace accident: 23"   Naro took at look at the collapsed entrance, and spied a soul coin underneath a few rocks. He picked it up, and gave a knowing look to Rusticus. The dwarf took out his writing tools and crossed out "23", writing in "0" above it. They both nodded, and left the area, following in everyone elses footsteps. They reached the junction that Opal and Xora had gone down. Naro decided he and Rusticus needed to split up to try to find them. The plan was, whoever finds the group sends back one of the members to go and grab the other. They agreed to this, and went their separate ways.   Rusticus headed south down the hallway, picking his way expertly through the rockslide, finding himself at another large metal door. He slid the second silver key in, and unlocked the door. As he walked down the hall behind the door, Naro caught up to the battle raging with webs and clouds.

Green cloud smoke / ink on water on white background by selinofoto
The first thing Naro saw was Ryder, on his hands and knees, dry heaving. Ryder wiped his brow and looked up "Oh, hey man" he coughed out. Feeling better, Ryder stood up.   "There's some sort of magical clockwork down there, I'd watch out if I were you".   Markus immediately began dragging himself and Naro into the fray   "Markus, no, wait!" They cried. Naro found himself stepping into the green fog, and immediately became stuck in webs. "Dammit Markus!"   Inside the foggy webby mess, Xora and Opal freely moved about. Opal made her way away from the mess, and carefully opened the door. Xora powerfully charged out of the webs, and made her way into the room featuring the clockwork mage. However the metal being had slipped into the shadows, and all she found was a room with 3 closed doors. One was black metal, and quite large, while the other two were simple wooden doors.   Searching for the clockwork, she approached the large black door. Xora reached her hand up to the door, but the hairs on the back of her arm began to stand on end. Being a very superstitious elf, Xora backed away from the door quickly. She took a brief look around, but decided this area wasnt worth her time.   As she made her way back into the mess, Opal and Tiddles were making a mess of their own. Inside the room Opal opened was 5 clockwork servants in a line against the wall, all on standby mode. Opal took one step inside, and immediately woke up the nearest one. Acting quickly, she whipped one of her tarot cards at it, which plastered its self to the metal body, immediately deactivating it.   Seeing this as his chance, Tiddles jumped up onto the desk, and slammed his rapier against his shield, blasting sound at 3 of the 5 clockwork. Two of them took great damage, while the other was made of high quality metal, resisting most of it. Opal ran across the room behind Tiddles, and darted into the next room. She found a large metal chest, with a cloth scroll inside it. Believing it to be highly magical, she unfurled it to read it, finding what appeared to be a plain map, without a legend. 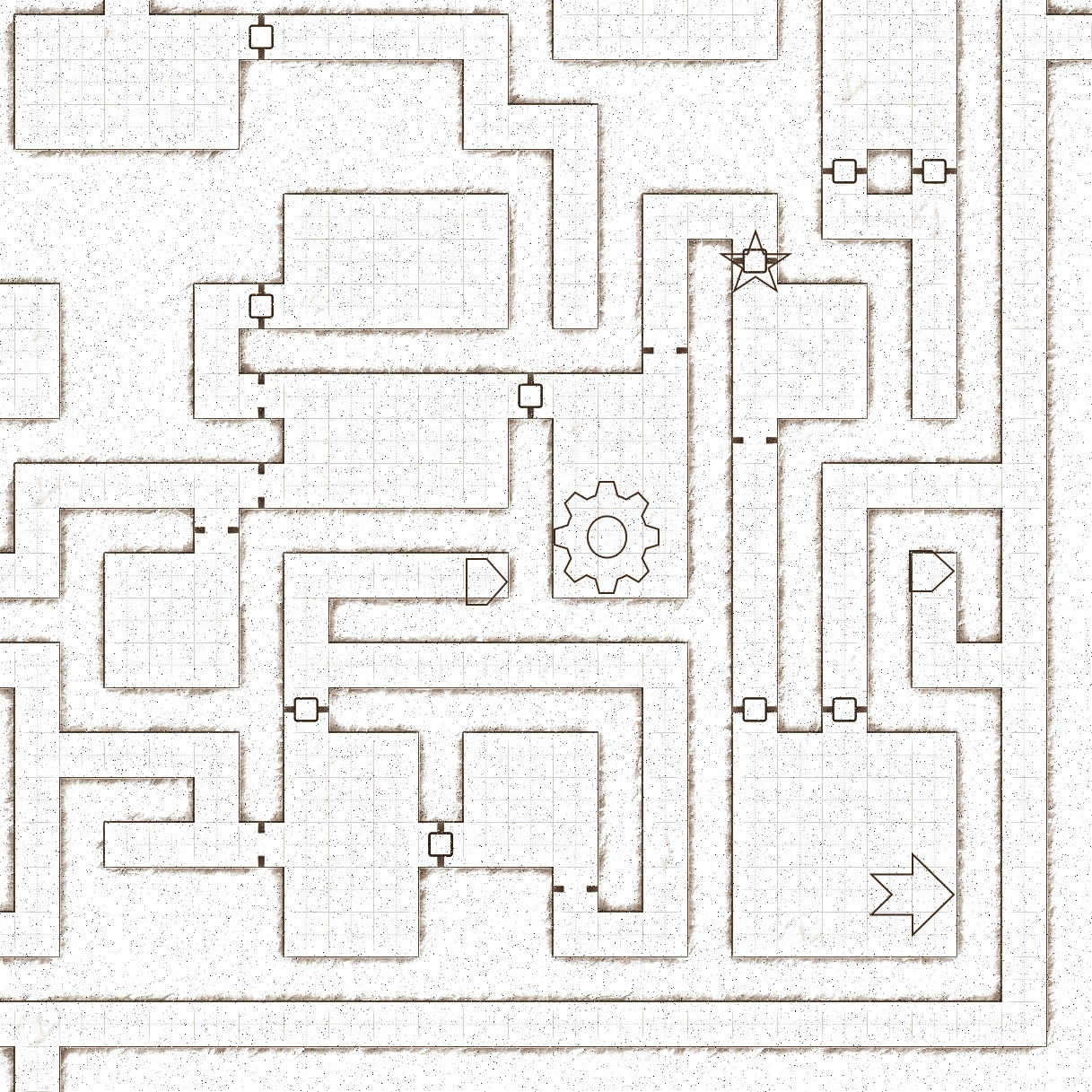 by Stormbril
Xora, climbing through the webs, spotted Naro struggling within them. He was yelling and arguing with himself, but using two different voices. She looked away, and entered the room with Tiddles, tossing her chakram at one of the damaged clockwork servants. It immediately vibrated it's self into pieces, and fell to the floor.   Ryder, feeling better, gave the arguing Naro and Markus a nod, and snuck by them. He entered the room behind Xora, took one look at the mess, and called upon Kir. A ghostly shape formed out of a dark fog swelling up from the ground. It began to glow and swirl until settling on the shape of a large man with a large sword. Kir hefted his greatsword and calmly approached the construct disabled by Opal. He swung his sword down, and cleaved the disabled servant in two. 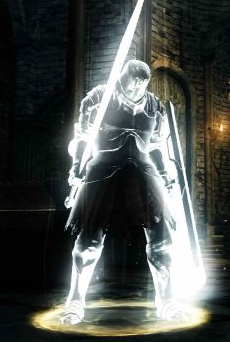 Screenshot from darksouls by FromSoftware
"Who is HE?" asked Xora, amazed. Ryder nodded and said "That's Kir. He and I have been through some things, and we're a bit inseparable. You could say he's my curse, but a beneficial curse." Xora, knowing something of cursed, nodded back appreciatively.     In the distance, beyond the rockslides and open doors, Rusticus was unable to hear any of this. He had his own problem to face. Behind the door he had just opened was another large clockwork man weilding another large metal shield. Intending to surprise it again, Rusticus quietly approached. However his dwarven footseps were too loud, and awoke the clockwork guardian. It took one look at the dwarf, before lifting it's shield and charging, smashing it into Rusticus.   Rusticus shook it off, and taking his cue, swung his hammer into the clockwork, deftly avoiding striking the large shield. The two of them began trading blows in the tight corridor, metal striking metal, and metal striking dwarf.   The clanging noises echoed down the hallway, ringing faintly as they reached Naro and Markus. Naro was still stuck fast, but the noxious green cloud surrounding him finally faded out of existence. He began pulling himself out of the webs now that he could breath properly. Farther past him, Tiddles, Xora, and Kir were making short work of the clockwork servants. Tiddles had been shot with a net launcher, and found his movements restricted. Xora, unburdened, threw her chakram twice more rapidly, ending another clockwork servant.   In the room next door, Opal pocketed the map. She came back in to the room with Xora and Tiddles, and joined the combat. She summoned and threw a snowball, which burst harmlessly against the clockwork nearest to her. It looked back, and fired a net at Opal, which entangled her. Despite the net restricting her movement, Opal once again threw a snowball, this time with more oomph, tearing pieces out of the mechanical man. It took a couple jarring steps towards Opal, as Tiddles deftly dispatched his own clockwork foe.   Finally, as Xora once more threw her weapon, the last clockwork servant went down. With four of them breathing hard next to clockwork detritus, one angrily arguing with himself and extracting himself from webs, and the sixth trading blows with a large shielded clockwork being, time once again began to stutter. Everything slowed down, as the stutters became longer, and the pauses greater. Unbeknownst to the party, time once again froze.