On a quest to understand the world

Article contents by Moonflowerer, aka Opal

Clover-shaped witches mark. Some scars on her hands from miscast spells and severe paper cuts.

Arcane deck of cards for ranged spell casting. Does not have a familiar. Nice big hat. Cloak of Resistance. Blouse of Cackling Hag. Ring of Counterspells (gained in Synthacrosia)

At an early age her family saw her magical abilities and quickly foresaw issues among their conservative village. Opal’s childhood had been average in her elven farming village. However, as soon as her witch mark appeared she began to feel the judgements of her community. When her parents finally sent her away to the prestigious university in Radripal it was permanent exile from her community.

The university was not immediately a welcoming place for Opal. After facing prejudice for being a witch, Opal now faced prejudice for being an Elf. She often entered duels with other students who tried to bully her because of her race. Her trusty lightning bolt often won out. She struggled for her first few years there until she met one particular elven professor who guided and mentored her. This most influential instructor, Lup, advised Opal in her quest to understand the world. This drive for understanding led her to the planar system and her studies in space/time.

After gaining mastery in her field Opal remained at the University on a grant to continue her research. Sometime before showing up in purgatory she was experimenting with Blink, Dimensional Door, and Twisted Space. This lead to her death ... or she may have erased herself from space/time which has the same result.

Homeschooled in her conservative village, before her parents finally sent her away to the prestigious university Prandreh University (City of Radripal https://pathfinderwiki.com/wiki/Radripal) Acana mastery in space-time

Opal was just about to begin work as a professor after finishing university, before her accident with space time experimentation.

Below is a personal journal kept by Opal, highlighting her travels with Those who would climb the tower of souls

A short journal of doodles and notes

Altruistic; aims to be helpful to others. Goal oriented. Focused on orderly / balanced justice. ENFJ personality (Extroverted, Inuitive, Feeling, Judging, and Assertive). Believes in the good in people.

; to expand understanding of the unknowable planar system, space, and time. To be as welcoming to others possible - balance to the ostracism she faced as a child. To support those that need it and mentor any that ask for it. She wishes to pay back the debt of kindness her mentor gave her.

; to understand what happened to her and her companions. She does not believe herself to be dead and wishes to understand how her magical experiments ripped her into another plane. Connection with her companions is also important to her. One member of the group is a bard, Tiddles, and she was struck with the idea of becoming a band. None of the others were particularly enthusiastic about this idea, but Opal hopes it will instill a sense of companionship among the group. She fears that in the lawless Synthacrosia they may turn on one another if their situation becomes dire… More dire than already being dead.

Her training at the university lead her to become an expert in the Acane and matters of space/ time. This unfortunately left little time for a witches usual communing with nature and she can come across as out of touch socially as well. Her tolerant nature can lead to issues in combat as she will often prefer talking to an obvious enemy in an attempt to resolve things peacefully.

Opal did not grow up wealthy, but the culture of of the University instilled a taste for fashion. Opal enjoys well made things, fancy hats, fur collars, and matching shoes. She loves being as sociable as those around her will allow. She prefers to have a clear plan of action laid out, but is able to adapt during combat. She found herself an expert at magic duels during her time at the university and enjoys tossing opponents on their asses. She abhors racism and will not stand by if another is being treated thus. Unjust or unthought out plans often frustrate her. She would rather leave someone to their own, idiotic, devices than intervene. She sees this as natural justice for any stupidity they bring upon themselves.

She is charismatic, tolerant, and reliable. She wants everyone in her group to feel welcome, something she did not always receive as a witch and an elf. She tries to start up conversation with any new members and always makes sure everyone is up-to-date on the adventure. Her reliability translates often times as misguided enthusiasm. That is, she is always eager to help and sometimes does not think things through completely [see: anytime lighting is cast]. She strives to be lawful and just in her actions, but occasionally a clumsy prankster sneaks out.

Speaks with a southern drawl. 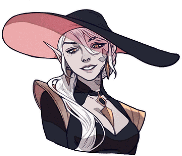 I love her. She's so interesting. It was a fun read. I hope to see more of her.