Carving tunnels in the dark

These critters have proven surprisingly resilient to the corruption the other clockwork appear to suffer from. I'd guess it's due to their size, but Clockwork Familiars are a thing, and those are as corrupt as they come. What is it about these moles that makes them special?
— Clockwork Researcher

Byproduct of the Second Forge

When the clockwork horde of Stone Castle Invictus completed construction on the Second Clockwork Forge, within The Down Deep , these creatures began appearing within the caves. Whether it was an intentional design of the horde, or an unintentional byproduct, is up for debate. The people of The Great Tree believe it to be unintentional, due to the Clockwork Mole's tendency to ignore any and all living things, unlike any other corrupted clockwork.

The first noticeable thing about Clockwork Moles is the plating on it. The entirety of the construct's small frame is covered in 5cm thick brass plating, with smaller steel plates on top. The plates overlap each other, and leave gaps where joints need to be. Beneath the plating runs thick metal cords. These cords attach to the plates, the gears, and the skeleton, acting as a system of pulleys to help control the movements of the mole. Deeper still is the skeleton, the gear work, and the crystalline structure powering every small construct.   Generally, any Clockwork needs to be wound to continue operating -- the frequency of winding varies from clockwork to clockwork, depending on size and power. A unique part of Clockwork Moles is their lack of any winding mechanism; instead, the softly glowing blue crystal within appears to power the machine.

The purpose of these constructs is yet to be determined. Most of the time, clockwork moles are found doing one of two things: Digging small, extremely straight tunnels, connecting cave to cave, or resting motionless on cave floors for hours at a time.   The tunnels are often times small enough that they collapse shortly after the mole goes through. Once a mole decides to dig a tunnel, nothing short of destroying the construct its self will stop it. The steel claws on each of the moles hands are incredibly strong, and can dig through almost any material found in The Down Deep .   When a clockwork mole chooses to rest, it does so with a similar tenacity. Explorers have often tripped over resting clockwork moles, sometimes injuring themselves, without disturbing the mole's rest.

As the moles are generally safe to be around, some explorers of The Down Deep like to set up their camp fires next to resting Clockwork Moles. The reflecting firelight off the brass and steel plating makes for an entertaining light show.

The Tree People who chose to explore the Down Deep quickly discovered uses for the strange, small clockwork. What initially began as a fascination due to the mole's docile nature, soon turned into experimentation. When a clockwork mole is in it's resting state, it will become unresponsive to nearly all stimuli. The explorers discovered that if one gives a twist to the gear on the clockwork mole's nose, and quickly rapps their knuckles 3 times on the steel plating on the head, the mole will reactivate, and begin attempting to tunnel directly forward in a straight line.

Resourceful explorers with a good sense of direction often use Clockwork Moles to access previously unreachable pools of clear water. If an explorer finds a pool of water, but hears the sounds of ringing metal nearby, they'll attempt to tunnel in from a different location. The explorer will follow the caves downwards, and hopefully wind up below the pool of clean water, carrying with them a clockwork mole all the while.   When they reach their "launch point", the explorer will place the mole down facing a wall, angled upwards at the proper assumed angle. The mole will be activated, and dig in a straight line -- hopefully rewarding the resourceful explorer with a stream of drinkable water.

Bored Explorers, utilizing the same methods as water-tunneling, will often grab a partner, and a clockwork mole, and set up a game known as Mowling.   Using 5-10 different sized, clearly marked rocks, they will set up a small area next to a wall of the tunnel. Each unique rock will be given a different point value -- the smaller the rock, the higher the points. The first of the two will take the resting clockwork mole, and head down through the Down Deep, until they are able to reach another tunnel roughly adjacent to the first. They'll do their best to aim carefully, then activate the mole, hoping for the mole's tunnel to terminate directly in line with the highest point rock. 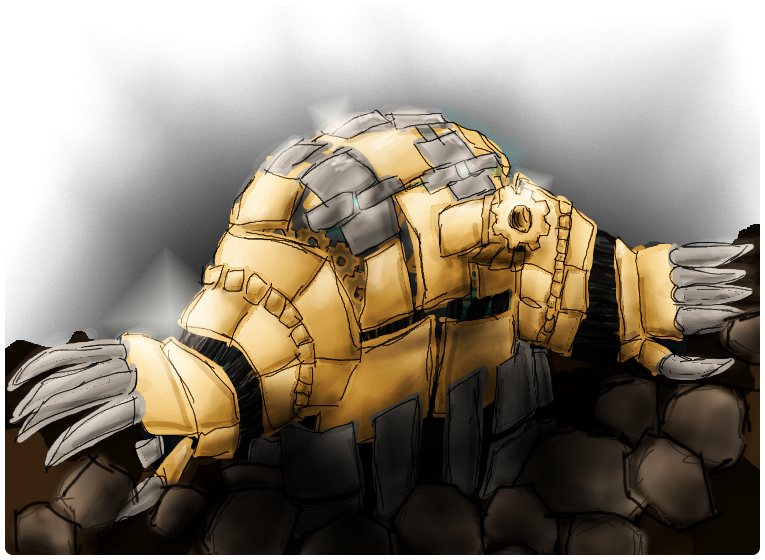 Creators of the Clockwork Moles

The Industrious Castle City of the Fifth Floor

You root here, I can make em way oer through the deep. rsSSHhh eheh. Imma be bring this Metmo with me. Ifn my map is true, ifn I stand in this tunnel here... shhhhh... rrrrkk... I can send the Metmo right back to ya. Ehehe. We can play Mowling in the deep here, rrRk.
— Last words of a lost Tree-Woman

All images created by Stormbril

WOW! I just mean wow! This is such an incredible and original ideas for a species! I really did not expect to see a biomechanical creature when i heard of the name clockwork moles haha. This really is an incredible article!   First of all, i just love the concept itself! Its so original and well executed that i just cant help but love it XD. The clockwork moles sound like nice, innocent little creatures to me! You really manage to weave an atmosphere of mystery around these animals with your writing!   Secondly, the amount of detail you put into here is just amazing! I really loved how you went deep into the details about the clockwork moles behaviours , which makes sense since i am guessing they show up quite a bit in your world!   Lastly, and most importantly, the aura of mystery you manage to weave around this article is what i liked most. It makes me hunger for more info for the clockwork moles and you have managed to pull that off spectacularly!   As for questions and feedback, i didnt have much in the way of formatting (seriously, i am like a formatting peaseant giving orders to a formatting king like you). But i had a few content feedback after searching in my mind for a long while!   1) What are the relationships between the clockwork moles and other clockwork automatons and vice versa?   2) Do any moles ever try to get out of the down deep or are even brought back to the surface by adventurers?   I really tried my best to write a coherent and good comment for this article but then again i am racked by anxiety and sleep as i write this XD. I really do hope it did help though! Congrats storm and keep up the amazing work!

Thanks again for a wonderful comment Blood! Don't force yourself to do things when you're sleep deprived and anxious, your own mental well being comes before commenting on things! haha.   All the same, I very much appreciate it :)   I'm really glad you enjoyed it! This article mightve been my favourite to do so far. Especially adding the art, just super fun. They actually only exist within the Down Deep! A strange byproduct of the Second Clockwork Forge, totally unintended.   Answering some questions   1) There's actually no relationship beyond their initial creation -- the corrupted clockwork generally ignore the moles. That might be something interesting to write about though... maybe the corrupted clockwork want to "recycle" the moles into more clockwork later on?   2) Some silly people have brought the moles back, much to their friends dismay. The moles can tunnel through nearly ANYTHING, which is generally bad when you live thousands of feet in the air on the branches of a giant tree.   That might be a fun silly article to write!   Thanks again blood, and get some sleep! haha.