This... feels... powerful. Like we shouldn't have it here. Like it could undo whatever it is that holds this Tower together. We have to put it away... we have to hide it.
— Sometime around 900CE

Spread throughout the many corners of Synthacrosia are remnants of the Tower's construction. Powerful artifacts rendered from the remains of souls within the primordial Purgatory. Among the hidden artifacts exist a few that appear to have been used during the most important parts of the construction of Synthacrosia. The Binding Hammer, hand in hand with ancient and powerful dark-iron spikes, were used to anchor Synthacrosia to this plane of existence.

The actual creation of the Binding Hammer and Ancient spikes is a secret known only to the late Locorin. It is unknown if he told anyone before he died, but it's doubtful -- Locorin was an incredibly secretive individual about his prior life, and once he went missing, he was never heard from again.   As spikes have been found over the years, as well as scraps of old documentation, theories have arisen as to the artifacts initial uses. Scholars from the Fourth and Fifth Floors most notably have found the most information regarding these items; a spike was found in both the labyrinth of rooms within Stone Castle Invictus, and a second among the islands scattered around the Fourth Floor Ocean. Documents that hint at the existence and purpose of the Binding Hammer were found in a cave on Mammoth Hill, on the Fourth Floor, and quickly stored in the archives on The Waves of Sommerson.

The prevailing theory on the Hammer and Spikes is that they were used to force Purgatory into a physical plane. The spikes were placed in strategic locations, and the binding hammer used to warp space into existence, creating the cornerstones of Synthacrosia.

Think about it for a second... in all the stories of Purgatory you heard during your life, was it supposed to have any sort of land mass? Because I don't know about you, but all I ever heard was "white, empty, expansive nothingness". Seems like he'd need some mighty strong magics to pin this tower down.
— Fourth Floor Scholar

It was during the early years of the War of the Fracture that more of the ancient spikes were found, hidden away within Stone Castle Invictus. Researches within the castle found them in a hidden room, long forgotten, accessible only via a tight passageway behind a secret door. Within this room, they found three dark iron spikes, and a sparse collection of texts. The majority of the text was unreadable due to age; however, they were able to infer a secondary use for the spikes, and possibly the hammer -- should they find it. The Scholars from the castle planned to use the spikes to break part of the tower, as to halt movement between the floors.   When the Fifth Floor attacked the Fourth, they stole the documents from the archives on The Waves of Sommerson. They were able to put together the full truth about what the Binding Hammer was able to do; using all the documents they were able to collect, they were able to put together where the Hammer was located.   Using the Binding hammer, and a collection of Ancient Spikes found, the Fifth Floor sealed themselves off from it's neighboring floors.

Only one scrap piece of parchment was ever found containing images of the Binding Hammer and accompanying spikes. The text, found during the search of Stone Castle Invictus, contained a detail image showing the Hammer in full profile view. The handle appeared to be wrapped with simple leather. At the bottom of the handle was a large irregularly shaped knob -- the pommel. The head of the hammer was intricately carved with repeating patterns and unknown runes.   Three spikes were shown next to the hammer. The spikes were drawn simple, and crude. Darkness appeared to radiate out of the spikes, spilling across the yellowing paper. Sharp edges glinted maliciously from within the darkness around the spikes. They appeared to be nearly half as long as the handle was on the Binding Hammer.   The page had no additional text on it. It was also found unaccompanied; no other texts were found next to this image, and no other documents made mention of the physical characteristics of the artifacts. 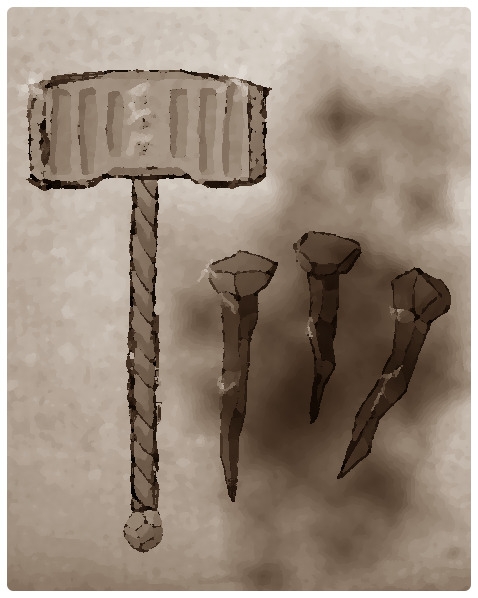 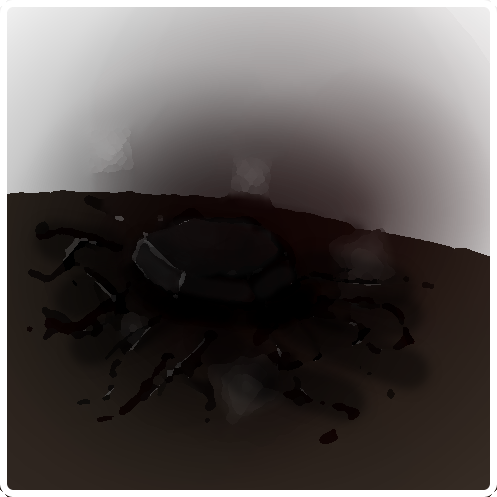 Artists rendition of an Ancient Spike, hammered into the ground, radiating darkness

After the War of the Fracture, the location of the Hammer was again lost. Resident's of either the Fourth or the Sixth floor had no idea where the artifact had gone; while they might have guesses that it'd be found within the Fifth Floor, that Floor had been cut off, and no research could be done to determine it's wherabouts.   Residents of the Fifth Floor had been broken shortly after the conclusion of the War. Their minds fled them, memories fractured, and they too lost knowledge of where the Binding hammer was located.

Only three of the ancient black iron spikes are accounted for; the rest have never been found, and a total amount of them has never been determined. One spike is located safely within the headquarters of the Wandermeran Intelligence agency. One spike has been lost in the ocean of the Fourth Floor. The final spike was driven into the ground, in a small street within Main City on the Sixth Floor. The spike has created an aura that stops anyone from entering the stairwell to/from the Fifth Floor.

So William's got quite the tale, eh? I'll save most of it for him to tell you, but lemme give a bit of a teaser... From what I understand, when he was sailing past Black Ruins on his way into port, something happened. Some magic, dark, crazy cloud enveloped his ship. [...]
— Conversation in the Blackridgepool Inn

Paper texture via Unsplash.   Header Image patterns via Patterncooler.com.   All other images made by Stormbril.