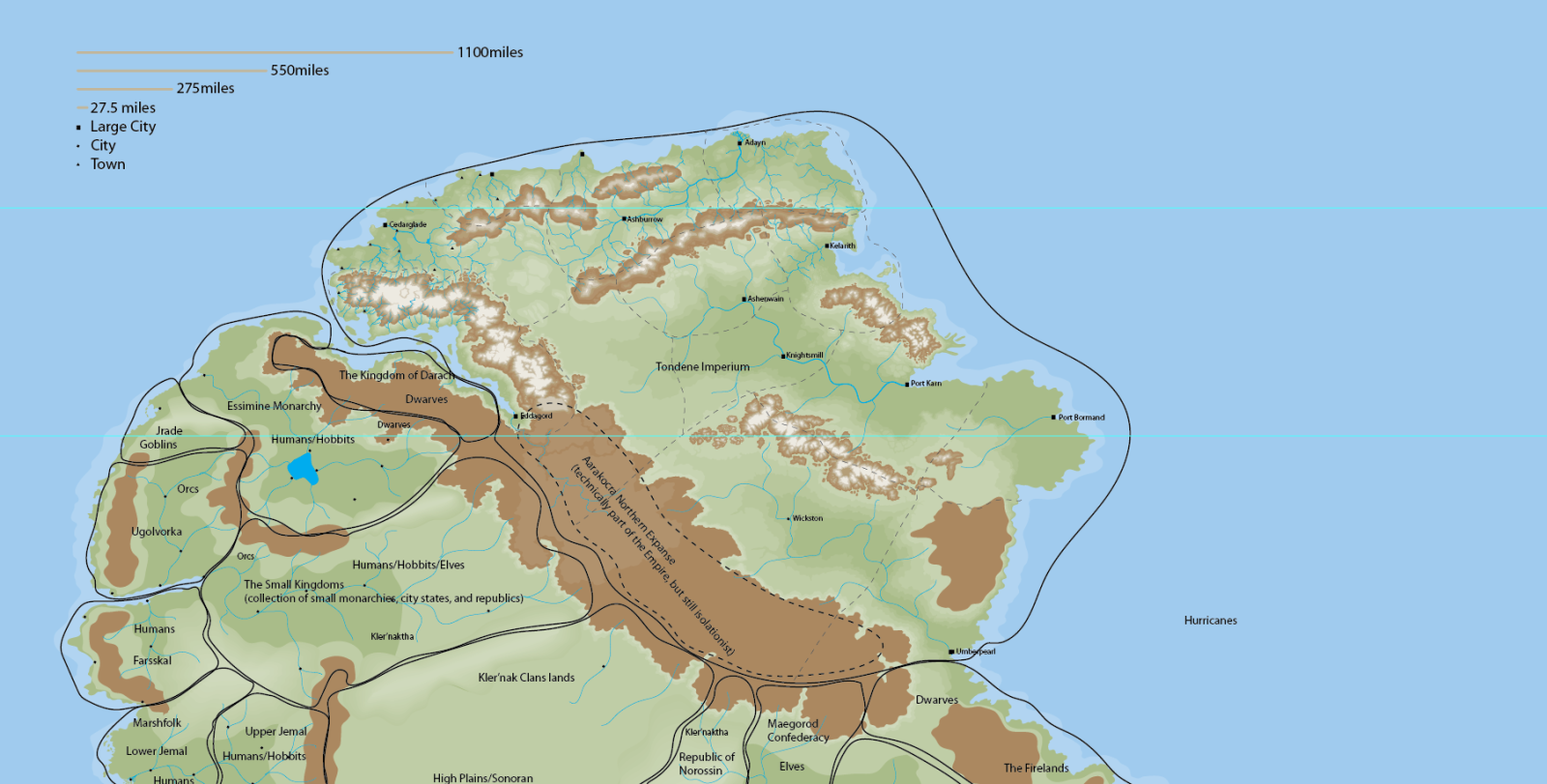 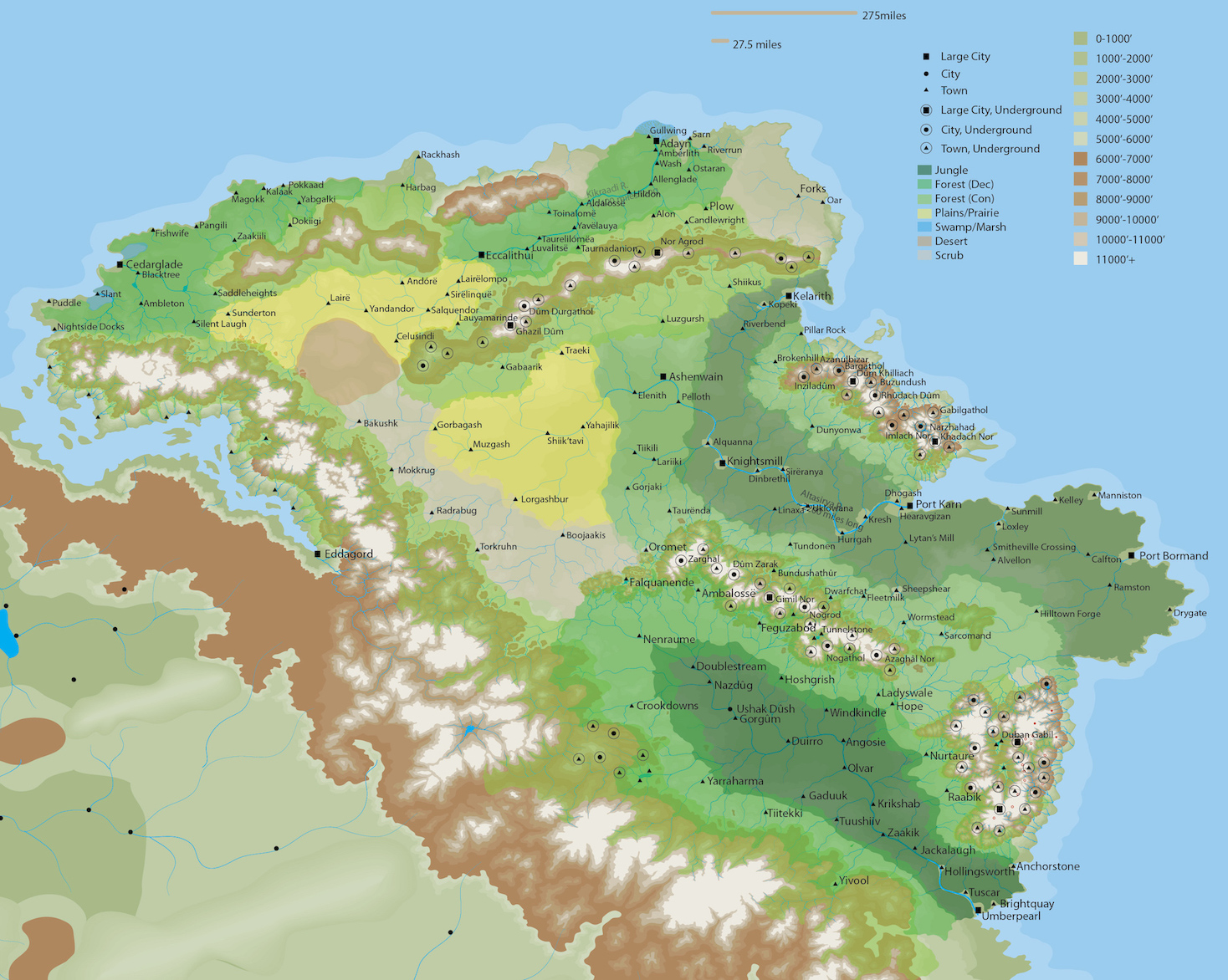 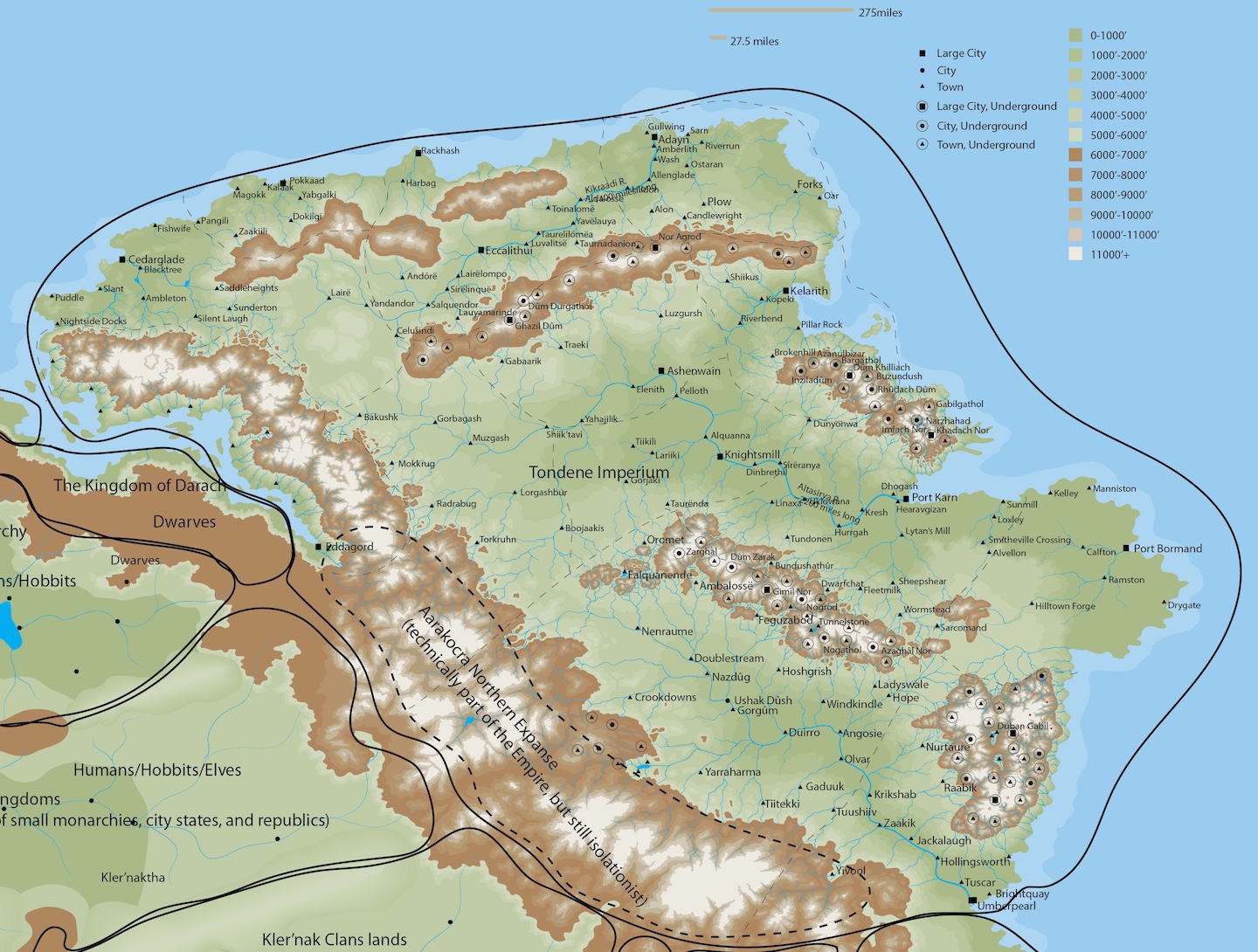 The Tondene Empire is the most cosmopolitan of the countries on the continent of Endrica. The series of emperors conquered lands containing every sentient race except for the kler’naktha, but only because they are on the other side of the tallest mountains on the planet. The current emperor, His Worthiness Kenryth the Hand of Mithras, has a very large collection of shards, and he wants more. Wants them to the point that despite almost of century of stable borders, he has become expansionistic. He has begun training his legions, and setting up caches of war materiel and supplies. Most likely he will head west, past the Kingdom of Darach to the Essimine Monarchy in his campaign of conquest (and shard collection). Then the Empire can turn it’s attention to the Kingdom of Darach, which is a much tougher nut to crack. While it would be easier to send his armies into the Small Kingdoms, taking them piecemeal, leaving the Dwarves as a threat to his rear would be unwise.   The southern coast line is prone to hurricanes. The Northern Expanse of the Aarakocra is located within the borders. While they are technically citizens of the Empire, most sky folk don’t have much to do with other races. A few, however, do, and can be found in other cities scattered about the nation.   The Empire is comprised of twelve Grand Duchies; each duchy is made up of Counties, which are made up of Baronies. Baronies are divided up into Steads/Manors, which basically have a village or town and the lands immediately surrounding it. Steads generally have a Knight as a liege lord to both run and protect the town. Knights select Bannermen to be their Steadfast Guards, which make up the local constabulatory, personal guard, and army when needed. The primary language that is spoken is a dialect of Old Araterre, now called “Imperial”. It’s a bit of a mishmash of several languages, much like English is now. They have, over the centuries, borrowed words here and there from various other languages.   2268750 square miles in size. 15,125 Baronies at about 150sqmi each; 1260 Counties at about a dozen baronies per county; 52 Duchies at about 20 counties per duchy; 12 Grand Duchies at about 4 duchies per grand duchy, although in this case it’s really all over the map.

Port Karn was originally settled by Orcs, who called it Pias Ukaduikm, or Port Kharneth. When the Empire (then called the country of Araterre) annexed the lands in -7AFE, it was renamed Port Karn. Eventually, Port Karn North was built on the northern bank of the river, making Port Karn something of a twin city. It has two suburbs, Dhogash and Hearavgizan, also originally orcish villages. Now they are huge, sprawling, cosmopolitan towns that are the main labor sources for the huge tracts of fields that surround the area. That cropland had been painstakingly clearcut out of the jungle.   Port Karn, a major trading center and port, boasts a robust wharf, mostly warehouses for the trading ships, but the northern portion of the bay houses the naval base and naval shipyards. The southern portion has a civilian shipyard, much smaller, but with three drydocks for cleaning the hulls of ships and repairing major damage. There are several eating establishments and numerous taverns dockside, to support the sailors and dockworkers.   It is the site of the largest bridge. At Port Karn, the Altasirya River is ten miles wide. The bridge is a series of drawbridges, the roadway running fairly straight about 30 feet above the water. It has thirty four areas where the bridge raises to let ships through. Numerous ferries ply the riverbanks, taking people and cargo back and forth from bank to bank. Plans have been made for a second bridge, much like the first, but funding it has been an issue. Everyone wants it, but no one wants to pay for it.   The local Grand Duchess is a Dwarf by the name of Frida Featherstone. Her palace is the one on the hill on the south side of the river. It’s walls are 40’ high, and the road to the gate winds all around the hill, giving the palace guards plenty of time to rain arrows onto anyone who tried to lay siege to the palace.

History of the Empire

Hundreds of years ago, the area now occupied by the Tondene Empire was made up of over twenty nations, of several different races. King Tondene, a human who ruled a wealthy, productive land called Araterre, built up a great army and navy. He then proceeded to conquer or assimilate his neighbors. Over the next six generations, the current Empire was born. See History of the Tondene Empire.

The geography of the Tondene Empire is widely varied. It includes tropical jungles, temperate forests, plains, scrubland, marshes, mountains, valleys, and even a desert. Several mountain ranges, large river valleys and watersheds, and an extensive coastline also define the Imperium's geography. It is rich in natural resources. It ranges from sea level to the top of the highest peak on the continent at 17540 ft. Just about every biome is represented; the Empire is a huge place that is almost the size of the continental United States. It extends from the equator to about the 50th parallel. Much of it lies in areas that would be considered rather warm in climate. Snow falls primarily in the higher altitudes.
Type
Continent
Location under
The Western Continent
Included Locations
Included Organizations
Characters in Location
Related Reports (Secondary)

Articles under The Tondene Empire

Politics in the Empire

Immigration in the Tondene Empire

Military Weapons and Armor of the Tondene Empire

The Duchy of Antonian

Military Organisation of the Tondene Empire