Elitheris breaks camp at the pretty lake. Her snares net her 3 meals: a rabbit, and a nutria. She keeps the rabbit skin. She travels eastward, but by evening finds herself traveling west. She makes camp. The next day she heads east again. She can hear wolves howling in the distance. She strings her bow. Suddenly, one leaps out of the undergrowth, biting her leg. Her armor protects her, however, and she takes no damage. But now there are more wolves bounding out of the undergrowth towards her, and she scrambles up into a tree. The wolves leap up to get her until she climbs high enough for them to realize they can’t get her any more, and they mill around at the base of the tree, hoping that she will fall out of it. 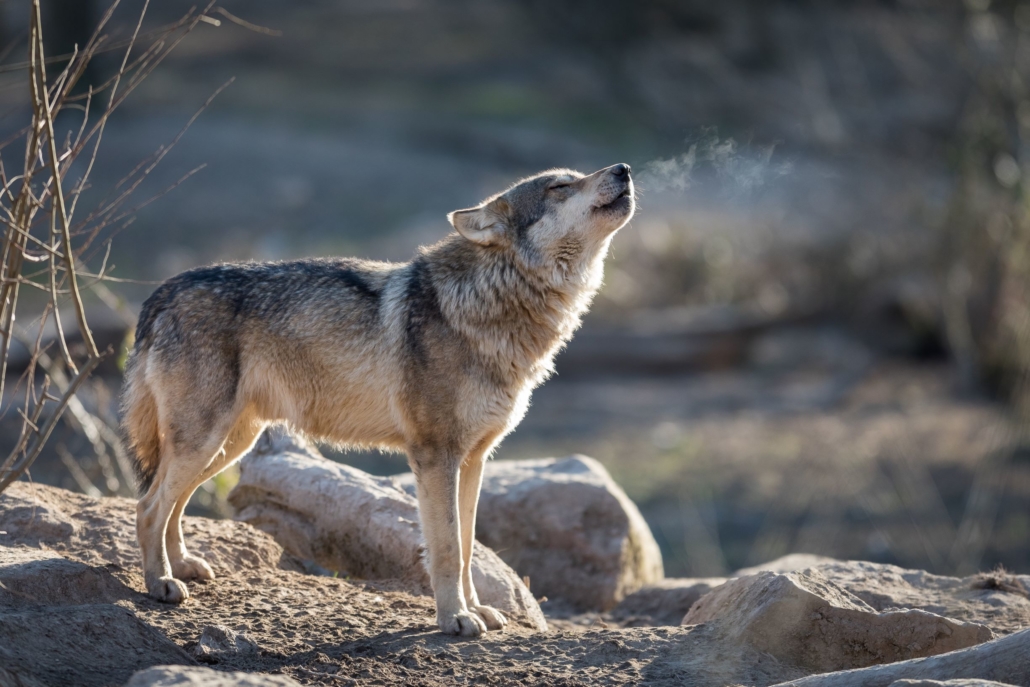 Unfortunately for them, Elitheris has other plans, and starts shooting arrows at them. The alpha male takes one in the chest, but it just pisses it off. The second one pierces the brainpan, killing it. The others flee off into the forest. Looking around, she can see a pile of stacked stones covered in vegetation in the distance. She heads off that way, taking the high road, climbing along the branches from tree to tree, until she gets to a ruined tower. 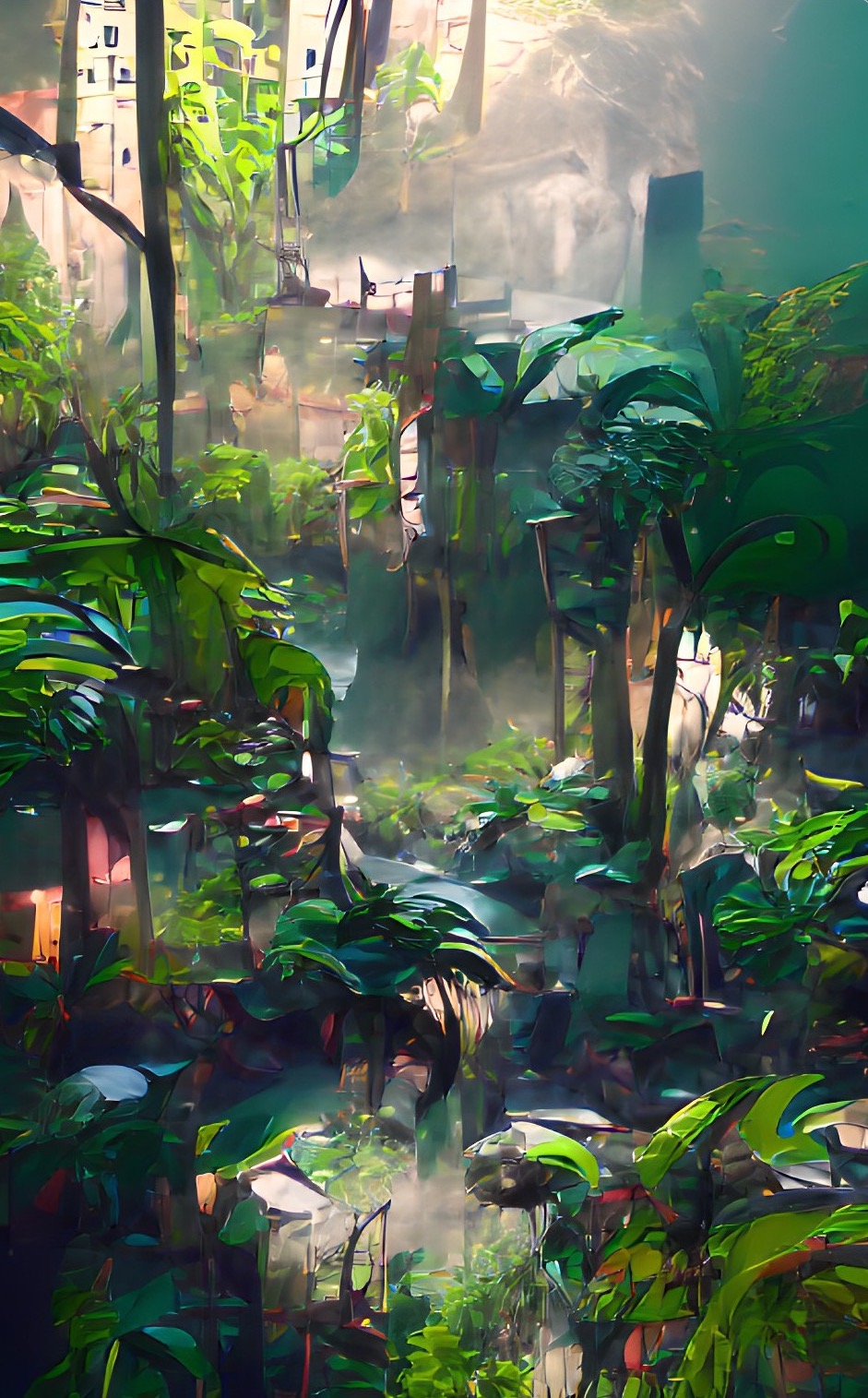 As she is approaching, she sees two wolves run into the opening that used to be a front door. Monkeys live in the top of the tower, and they are not happy that she is there. There are thrown nuts, sticks, small stones, and poop that shower her. They are annoying, but not particularly dangerous. A brave monkey leaps onto her back, but she grabs it, yells “NO!” at it, and sets it down. It runs off in a panic, glad the big monster didn’t eat it.   Elitheris hops from the tree branch to the ruined wall, looking down into the second floor study. Ruined furniture, debris, and vegetation is what mainly catches her eye, but she hops down into the study to explore. The monkeys are still howling at her, but aside from the occasional shower of thrown items, they stay out of her way. She can also hear wolves down below, in the first floor. She finds ruined books, and sees a liquor cabinet and a locked cabinet. She gives the locked cabinet a solid kick, and the weathered wood breaks open, revealing the mage’s important books. Most are still unreadable, but she learns that most involve Mind Control and Necromancy. All of them have the name “Magus Goradyn” written in the inside covers. Two of the tomes are still usable: both are spell books; Major Healing and Disorient. She also finds a ruby, enchanted to be a 4pt powerstone. She examines the liquor cabinet; most of the bottles have sludge in them, but two are in good shape. She takes the fine apple brandy and the fine gin. Both are old, and very potable.   Next she moves into the other room on this floor, the alchemy lab. It’s mostly a mess of broken glass; the monkeys have been here and trashed the place when they kept getting hurt by the broken glass. Now they avoid it. In the cabinets she finds a wooden box with some alchemical preparations in it. Useful stuff. She also finds a magic medallion (it gives the wearer immunity to the disorientation effect of the area around the tower, although technically Eli doesn’t know this yet).   The stairs down are blocked by vegetation, mostly grown into the space, but also augmented by the debris the monkeys put there to keep the wolves from harassing them. She clears enough to start down the stairs. There are four wolves down there, and when she moves down the stairs enough to be visible, they spring to the attack to repel the invader who is coming into their den. Two immediately run up the stairs; Eli backs up through the space in the branches she made. The first wolf attacks, and bites onto her arm. She stabs it with the arrow she was about to nock, and it lets go. The second wolf is now through the branches, and Eli jumps up to the ruined wall, attempting to get out of the area where she can be attacked. The second wolf jumps up and bites onto her boot, but its teeth fail to get a good purchase. Now she is above them, and while they attempt to jump up high enough to get her, they repeatedly fail. Meanwhile, the alpha female and her cub are moving up the stairs. Eli slams an arrow into the first wolf, killing it. The alpha female arrives, and tries to get at her as well. She puts an arrow into the alpha’s foreleg, crippling it, and the alpha slinks off down the stairs, hobbling on three legs. Eli puts another arrow into the remaining wolf’s forelimb, crippling it badly, and it isn’t able to hobble off. She follows it with another arrow to the head, killing it. She recovers three arrows, and can see downstairs as the alpha female and remaining cub run out the front door and into the forest.   She searches downstairs, finding the living room/kitchen, the jakes, and the closet. She almost misses the trap door, since it’s well hidden by a pile of wolf fur-covered debris. She opens it, lights an oil lamp, and goes down the stairs. It leads to a root cellar, complete with what used to be food, several hundred years ago. She finds a wine rack, with 8 unbroken bottles on it. One of them has a label she knows is top shelf stuff. But she is already encumbered, and leaves them. She does discover the hidden latch that opens up the wine rack, exposing a secret door. That leads to what appears to be an interrogation room (or some kind of experiment room), three locked cells (one with a skeleton in it), and a room with a pentagram inscribed on the floor (summoning room).   Not finding anything else of value, she leaves. She is still trying to get to Port Karn after all. By the end of the day, the disorientation effect has had her moving south instead of east, so she makes camp. She will head east, and since she is far enough away from the mages tower the disorientation effect won’t affect her any longer. The next day she is attacked by a pair of flickerbugs (insectoid puma-like creatures with an extra pair of striker limbs at the shoulders that can displace their image off to the side; this image lasts for a second or two before flickering to another location). 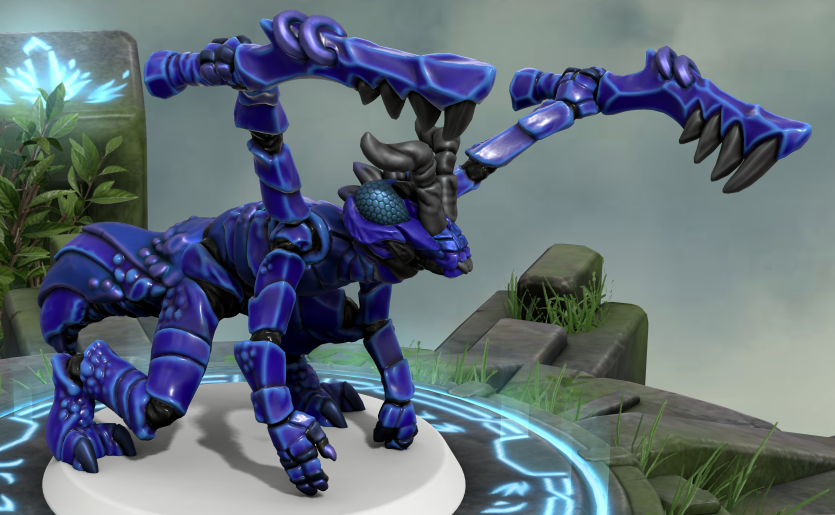 She climbs a tree, but not before one of them smacks her on the ass with its striker, doing no damage (the gambeson protected her). The two flickerbugs start jumping up trying to get her. She casts Create Fire, using the ruby for power, and the flames cascade over the flickerbug, and it panics and runs away. The second one attacks her, but due to a critical failure in its attack roll, its striker limb imbeds itself into the tree trunk, trapping it. Now knowing about where it is, she puts an arrow into its chest, doing significant damage, and when the flickerbug extricates its limb, it runs off too.   During a night camping, Elitheris notices something growing on the tree across from her, on the other side of her campfire. It’s crystals, growing out of a tree, and they are growing rather quickly, and spreading some kind of crystalline spores. It’s like a crystal infection. She uses fire to kill the spores, but worries that if she sets the tree ablaze, it will start a forest fire (something she doesn’t want to do…again). So she chops the tree down (above the crystal growth) to limit the fire, and sets the stump (and crystals) ablaze. They “die”. She watches the fire to keep it from spreading. She also noticed, carved in a tree off to one side, a face. It’s much like the “green man” faces, rather crude, but Elitheris got the impression that whomever carved it did it with purpose and determination, not just to deface a tree. Examining the tree, she noticed some glass beads scattered at the base of the trunk, under the face. She surmises that it might have been some kind of offering (but for what…?)   Elitheris continues traveling towards the city of Port Karn. Finally, she emerges from the forest, and can see the hedgerows and fields that surround the city. But it’s late, and she goes back a ways into the forest to make camp. That night, she awakens to find some guy rummaging around in her pack. She shouts at him, and he bolts off into the woods, more or less following the treeline between the jungle and the fields. She checks her gear, finding nothing missing. In fact, the man has left a bloody knife. She packs up her camp, and takes off after him, tracking him in the darkness by following his tracks. Her night sight is better than his, and she eventually catches up to him, sneaking up to him and putting the knife he left at his throat. A scuffle ensued, starting with him slamming his elbow into Elitheris’ face, interspersed by some basic questions to try to figure out what was going on. At the end, Elitheris was left with a bloodied nose and lip, a bruised face, and 3 hp damage. He had a major cut in his leg, making it temporarily useless, two lumps on his head from her knife pommel, and bloody scalp wound from the second strike that knocked him out. She tied him up, bound his wounds, and dragged him to a pasture where she found a not unfriendly Orcish sheepherder (Grumsh), who, for a silver piece, would help her drag the perp’s sorry ass to town.   Grumsh dumps the guy on the boardwalk outside the Rural Watch office in Smokebury, one of the farming hamlets that support the vast area of fields that support the population of Port Karn. He is dragged into a jail cell by the Goblin officer (Tejakkis) and Elitheris. The other officer (who I mislabeled as a Human, forgetting what time it was: he is actually Orcish) makes some notes in his ledger about the incident. Apparently they had been looking for someone who had stabbed and killed a lady named Lysette.   Notes: I rolled crappy damage for the foes; none of the wild animals (wolves or flickerbugs) managed to get past the gambeson. The perp managed to elbow Eli in the face, where she had no armor, and did a whole 3 HP of damage. She did well, overall, and managed to control the combats in her favor. She got a chance to use quite a few skills: Acrobatics, Hiking, Running, Climbing, Survival (lots), Navigation, Armory, Bow, Fast-Draw, First Aid, Knife, Naturalist, Stealth, and Tracking. She even used Ignite Fire and Create Fire, and most likely Guide Smoke, although we didn’t specifically name that one (although since she was having a fire each night she likely needed to use it).

A couple of bottles of old, fine liquor, some alchemical potions and unguents. 4 character points.

She explored an old mage's tower, now engulfed by the jungle.