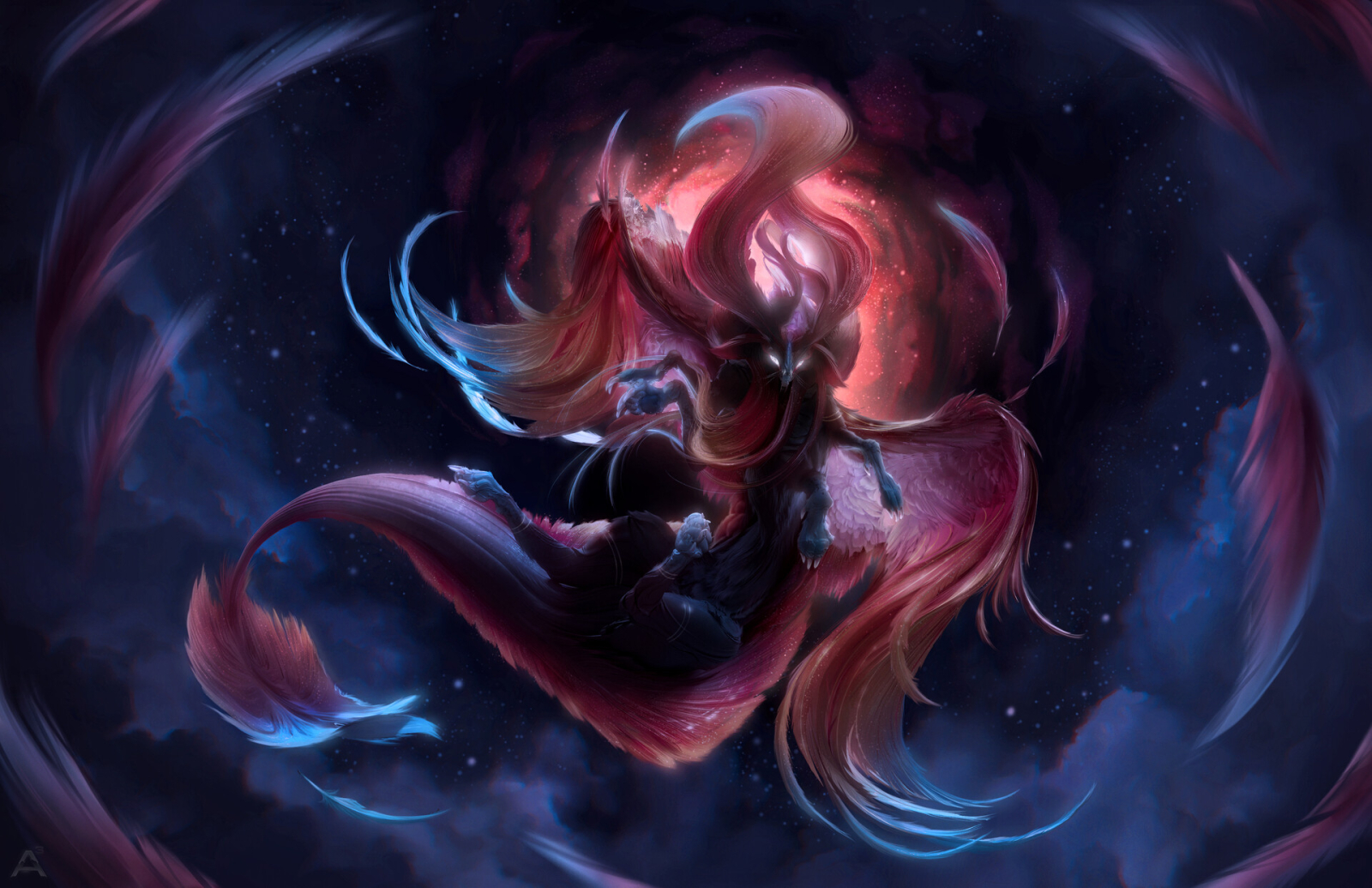 Laplwyds are a species of horse-like sentients who crossed over into Manidweepa from a so-called 'line dimension'. As such, a lot of traditional horse terminology have been escribed to them by human kind.

Their spines are mainly loaded along its long axis and higher axial compression which makes them four-footed.

The hair that grows from the top of the neck, across their back and through their tail.

Laplwyds possess a feathery ring that appears to rotate around their midsection in layers. They can easily be mistaken for folded wings at a distance and are coloured the same, or in lighter shades, as that of the rest of their coat. A clicking sound comes through with every rotation.

While it intersects the body's cross-section, it also appears separate from the rest of the body, maybe even existing in its own dimensional space.
— musings from Zanetti

So long as an injury or infection does not lead to death, the ring will keep spinning. When a laplwyd does die, the rings will immediately fall away and divide the body into two parts. The body ends sharply near to the end of their ribcage. The cross section does not show any internal organs and would appear pure black if slightly yielding.

Gentle leans and neck hugs are a common expression of love for the laplwyds. The feather rings are a semi-sexual organ where the fibers of a mating pair cuddle against one another and so conception is born that way.

You pawing at my back with your hands for your examination. I thought you were being fresh.   But it was so... clinical. I realized it probably didn't mean the same to you as it did to me.   Even so...
— cultural exchange between a laplwyd and a human

Laplwyds prefer all manner of vegetation: haylage, salt and concentrates of fruits and vegetables; or generally the supernatural plants that grow in the Farmland. Additionally, just like with their names, laplwyds eagerly adopted sugary foods in their contact with humanity.

Every foal is born a female. Typically, when a herd starts to form, one mare will shift into a stallion due to the groups needing a common partner to procreate.

There are 6 laplwyd queens who currently exist. They organize themselves into three companion pairs to look over their subjects. These 3 kingdoms are loosely affiliated with each other, with alot of internal immigration and trade.

A nearly hairless muzzle covering a layer of cartilage.

A crescent shaped crown made of a fibro-fatty foam at the forehead.

Laplwyds have two successive sets of baby and cheek teeth.

Laplwyds have no hands and only a limited ability to grasp with their fore limbs.

Physical / Metaphysical Law | Nov 14, 2022
Therefore, they adapted greatly to producing higher than average dignitas to telepathically manipulate objects in their environment. Several cognitive and circulatory functions within laplwyds physiology are even enhanced by dignitas.   The natural levels of ambient dignitas can vary between individuals, so certain laplwyds may lean on it for their internal systems more than others due to the greater efficiency than the mundane way.

Laplwyd biology is partly transdimensional. That is, not a lot of their bodily systems are all there.   They can't survive without their dignitas to pick up the slack.

Parents typically chose an aspirational names for their offspring. These can include future career prospects, ideal behaviours or qualities in the environment. In coming into contact with humans, some began naming after traditional human foods.

Ruled by Lazzaris and Cerise, the diarchy takes up the upward direction into the dangerous Battlespace.

Ruled by Loquent and Lezzy, the diarchy takes up the very middle of farmland, between Taw and Tie.

Ruled by Pallid and Sable, the diarchy takes up the downward direction into Perron Barren.

Laplwyds are very conscious of their image and colours. Generally, it's the brighter the better, but there are just as many cool-coloured laplwyds who are considered attractive. Grooming, filling and proper diets are obsessively catered to, particularly among the young, to maintain their coats.

The reasons for their brightness lies in their bodies' base chemistry utilizing toxic acids and halogens that permeate their interior.
— Echoist explaining why a laplwyds inspired simulacra is an unsuitable body for a human

They are generally bigger and rarer than mares in a 6:1 ratio.   The top of their crest grow stronger and more curved; and tend towards more competitive behaviours.

Mares possess an udder at their underside for nursing.   They tend to be more cooperative with other mares in their herd and possess a lesser combativeness towards those outside it.

For a mare to ask permission to court a stallion, they must present her intended with a flower from Farmland, whose colouring matches her fur. If it is accepted, the stallion agrees to being courted.

Herd formation is a throwback to the laplwyds' original existence being merely lines who would intertwin themselves with several partners at once and as a group as part of their social rituals. It is common for the laplwyds involved to establish themselves first before engaging in a relationship. Even after, they still maintain their own lodging and careers independent from the rest of the herd to better assure the attention of their own foal(s).

Typically the first mare in a herd would be considered the primary. But not always.

Simply the stallion who heads a herd with more than one mare is expected to provide equal attention to members of his herd.   Though, practically, he tends to spend more time with his primary in managing a common household.

A class of specialized alchemical transformations that alter the properties of metal alloys to make them more resistant to decay and deformation.

A ticking sound occasionally emanates from the feather ring. When the laplwyds entered the new dimension in alien bodies, they were uncertain as to the clockwork sounds. Now, they have gained a greater mastery of themselves and incorporate them into their breathy language.

Mares have a regular reproductive cycle that lasts a few days every seven weeks. However, there is a 2 week period where they enter into a frenzy heat and would rub against against stallions, other mares, other species or inanimate objects to relieve themselves. This psychological trait largely encourages a bisexual culture. Predictably, their acidic nature would corrode anything not resilient to it.

Laplwyds are a universally well-liked species within the Manidweepa. Credit for this is afforded to the queens who encourage interspecies communication and their willingness to liberally give aid to others.

Queens are a rare mutation among the laplwyd that include: They appear to be a breed apart from the rest of their kin, without the need or ability to transform genders or procreate.   Original Realm
Laplwyd existed for most of their species' existence as lengths of strings while in their home realm.

Geographic Location | Nov 7, 2022
Moving to the Carbon Realm
Laplwyd bodies flatten out like sheets of paper with their bodily features moving to just one side and the other completely bare.