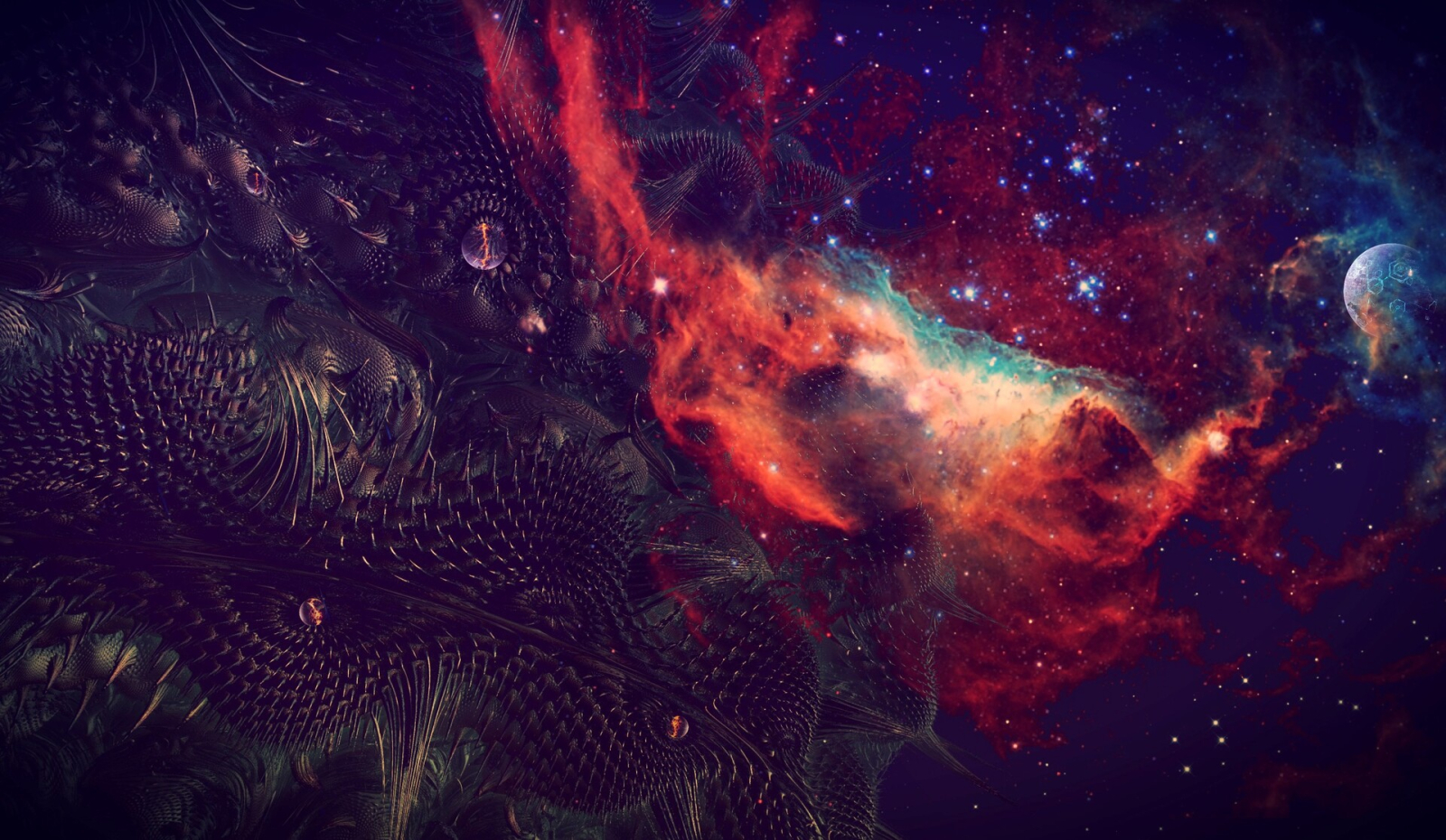 A worm-like entity that is ever sleeping and even though partly coiled in the vast edges of known Manidweepa is still large enough to take up the space of any entire universe.

Imagine, a primordial mass of flesh that exists in every dimensional plane that has ever, or will ever, exist.

An uncountable number of holes litter across the flesh's surface that are ringed with jagged teeth hidden under a heavy ammonia mist.

The eyes that similarly line around the Hothtaaz's body are covered with retractable layers of skin that open and close the eye.

The creature's mouth is only kept partially open as it snores. It exhales particulate matter like a cosmic wind capable for pushing ships off coarse. While still drowsy, the maw will yawn the size of Va Vivet to reveal several rings of tentacles inplace of teeth.

Parasomnias, snoring and paralysis are known, or thought to be known, to afflict the creature.

The madness is a psionic blast that comes from an open eye and that normally disappears into the void of the Threshold. The madness that is inflicted on persons caught in the purple beams experience brief moments of anxiety, obsessions or shades of depression that make them incoherent or mentally absent.

It is expected that a body so massive would attract smaller bodies under gravity. Some imagine seeing far distant spheres moving in the outer edges of the Lurker Threshold.

There are thousands upon thousands of sunken depressions on Hothtaaz's back and all being serenaded by their hostess Harmpannetsu.   Patrons sit in large circular rooms open to the lurker space while being catered to and feasted.

A dimensional anomaly that exists just under Hothtaaz's outer skin.   It is called the Mansion as, inspite of the fleshy exterior, the interior is composed of human architectural structures that shift from one style or orientation to another.

Hothtaaz is the largest living thing found by anyone, ever. Its size is only meaningful on cosmic scales and as such would need a cosmic mind to see or comprehend itself.

It may just be a matter of the size difference, but we cannot perceive any intelligent manner about it.

Though it is never known to have ever awaken; ethereals believe that should it ever, then its multi-planar flesh would destroy realities as it turns.

Harmpannetsu is the embodiment of mitial. She seems to be made of acoustic waves, materializing and vanishing as coils around Hothtaaz's galactic size frame. Her music, empowered by her mitial abilites, is thought to keep him sleeping.

Rhythmic and involuntary tremours caused by stresses, fatigue or stimulants that shake anything built across Hothtaaz's surface.

This is prehaps the most dangerous sport conceivable.   First, the racers must convince Harmpannetsu to rouse Hothtaaz just enough for a yawn. We risk the end of the universe for the thrill of riding a god's breathe.
— Nikit Mathur