With many countries having compulsory practice on Saturdays, Sundays, and Holidays ensuring that there is always a moderately trained force of men ready for the levy. They can be raised for defense of their homes and Hides with little notice. Require a Senights notice for the Fief or Shire, a Fortnight for the Province, and a Moon if they plan to march on another province. They can not be forced to march more than a Senight away from their provincial borders.
Any Yeoman or Serf of fighting age, between the ages of 14 and 50 years, worth 40 must have a gambeson, helm, and weapon. Any of those that can ride are qualified for cavalry. Every fighting age Freeman worth at least 200 must have a hauberk, helm, and weapon. Sign on for a fighting season at a time, generally from mid Spring to Mid Autumn. They are expected to train and drill every morning, march 15 miles a day, and uphold the code of chivalry. Can be removed from service for violations of the code of chivalry or for serious transgressions against the nobility or clergy.
From squad leader up to the Cavalier, leadership roles ensure the combat readiness of those under their command and lead on the battlefield. Care for and maintenance of the pack mules and any carts the formations use falls under the leadership of said formations. Squad members drill daily and are checked for contraband. Successful service can lead to upward mobility in the Social Hierarchy.

Squads of infantry and cavalry tend to consist of 8 fighting men, while squads of archers tend to have 20. 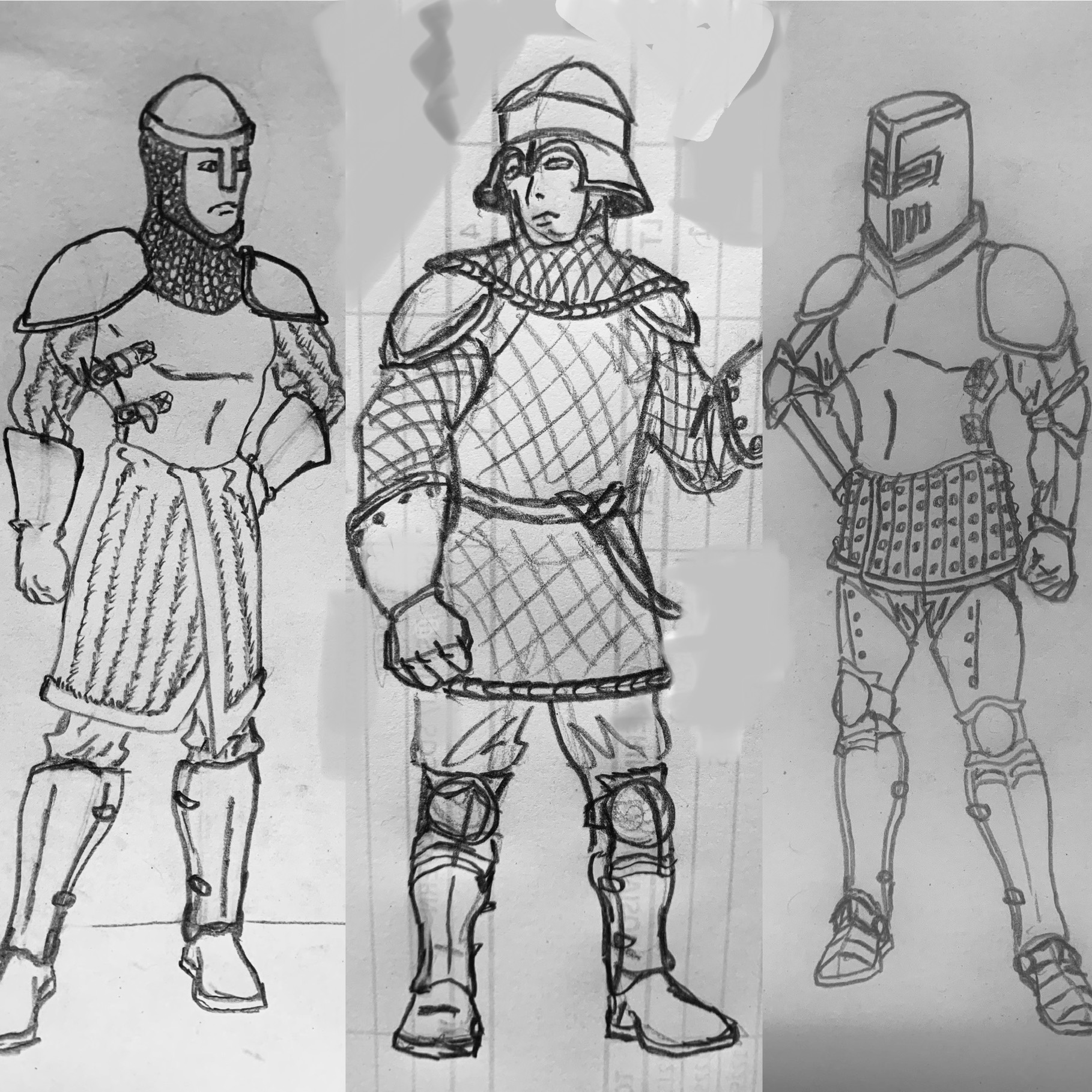 All fighting men carry a primary and secondary weapon, some carry a tertiary as well. Infantry carry a polearm (billhook, bardiche, vouge, ox tounge, fauchard, or spear) while cavalry carry a lance or spear, and archers carry a long or short war bow. As a secondary weapon most carry either an arming sword or long dagger (stiletto, rondel or bollock). Tertiary weapons can include a smaller dagger, knife, hand axe, or bludgeoning weapon.   Weapons of prestige include a war hammer, crows beak, halberd, morning star, and glaive.

Most countries require all fighting aged males to practice with their chosen weapon twice a week. Upon being called for the levy or conscripted they undergo a senight of marching drills before heading out on campaign. During the campaign they are drilled every morning to maintain battle readiness. After that, any man who wishes to make fighting their profession is responsible for their own level of training.

One mule carries the gear of an 8 man squad, while a two wheeled cart pulled by two mules carries the gear of a 20 man squad. The mules are cheap to feed and can forage off the land easily. Each squad is responsible for their own baggage, but the baggage trains are organized per company.   Tailors, cobblers, blacksmiths, armorers, sword smiths, cooks, thatcher's, masons, weavers, carters, porters, grooms, and messengers all travel with the formation among the baggage trains.

Horse fodder is 1.5 per horse per day.

Local nobles can call a levy or conscript men at the direction of higher nobles. They can require every family to provide one fighting age male, their social standing would dictate what equipment they must bring as well. Previous service determines at what rank they are hired. Those who seek to fight as a profession, mercenaries, must seek out the officers and apply for work. Sometimes entire companies can be mercenary.
Type
Infantry
Overall training Level
Professional
Assumed Veterancy
Experienced
Used by