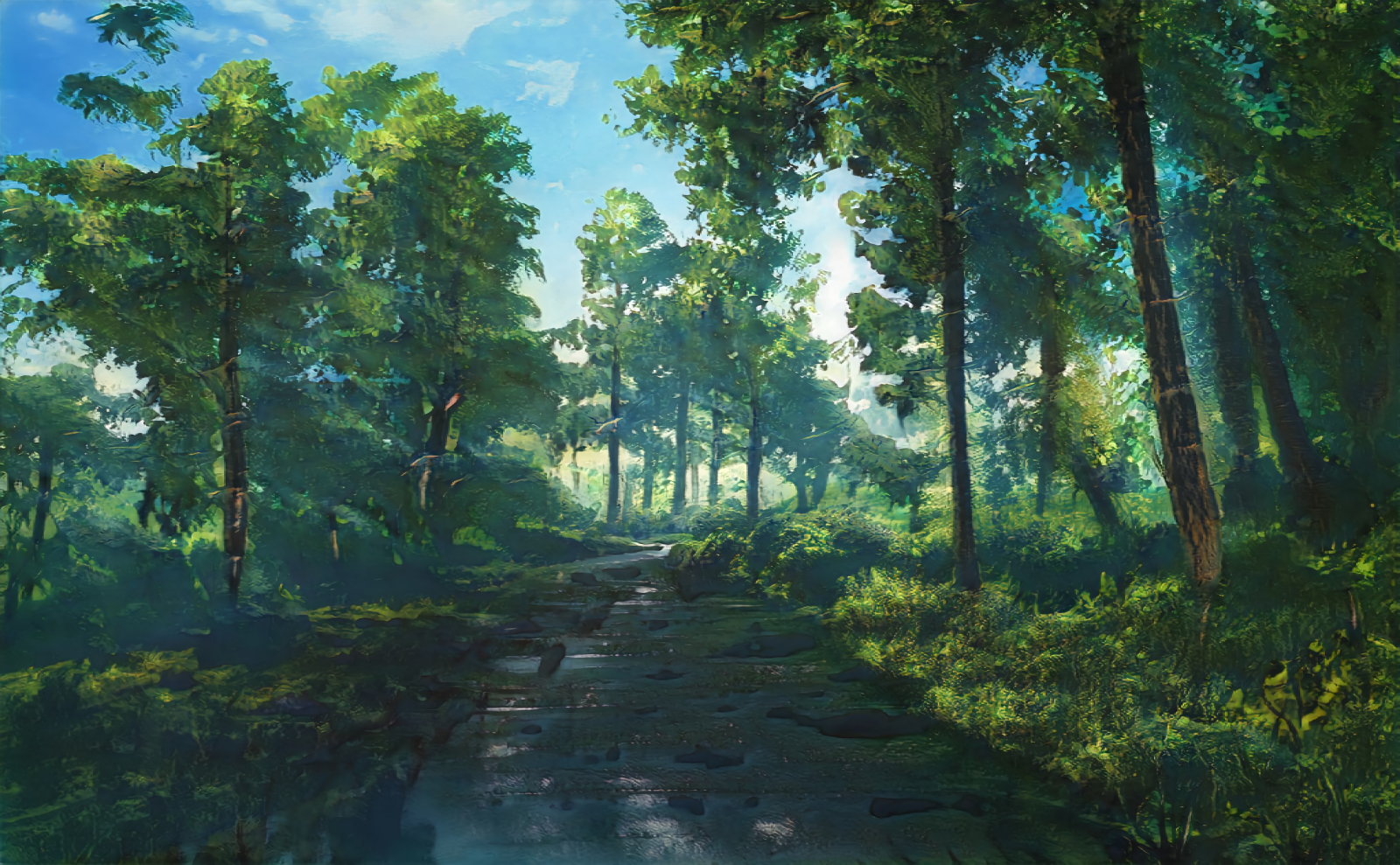 Battle of the Dragons Head

The Battle of the Dragons Head was a battle fought in the southeastern part of the region of Dercia, the Kingdom of Pearlhal, whose king had recently created the title Kingdom of Dercia and, with that, had made Pearlhals mission with the war apparent, that Pearlhal would not stop until the entirety of Dercia were under their control.   The location of Dragons Head was a small town set up in the remains of a skull said to have belonged to an ancient fire dragon. The town was renowned and still is to this day for its pyrotechnic. Their local area was rich in an oily substance they used to create their firebombs. Pearlhal had decided that it would be better if they brought the town under their control, so it didn't ally with the Alliance of City-states. and give their knowledge of creating firebombs that would light the targeted area in a fire that would burn with an immense heat that could even bend steel to the alliance who then would have a technical advantage both on the battlefield were Pearlhal currently had the advantage due to more mobile forces and during sieges were the use of the tech in a defensive way would make it almost impossible for Pearlhal to take cities without suffering casualties that could not be sustained.   Due to the high losses that Pearlhal suffered in the battle, some scholars have argued that the battle should be considered a defeat for Pearlhal instead of a victory. Some of their arguments are that it should not be considered a victory when the army suffered around 80% casualties and cannot fulfil its objective for the next two months until a replacement army can be sent there. Still, other scholars have counterargued that they would generally agree that losing 80% of the army should not be counted as a win. Still, they argue that due to the size of the armies present, the army from Pearlhal was based on the sources from that time, at least 4000 men smaller than the Alliance army than the fact that Pearlhals army survived and managed to force the enemy to cease the field to them should be sufficient to make the battle count as a win for them and not a loss as the other scholars argue.

High command dont like more than one disaster in a day. 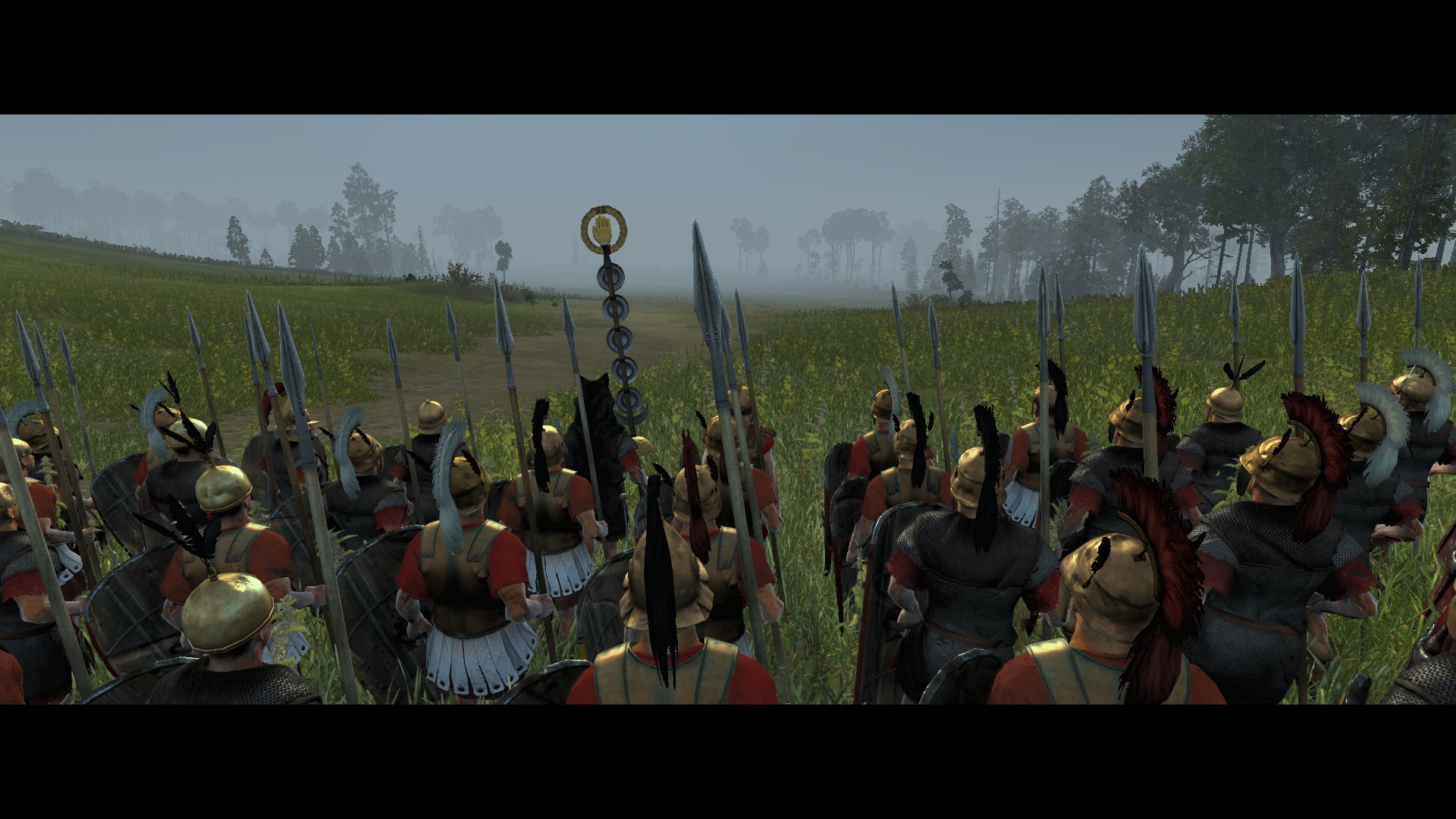 The alliance army had deployed its units on the hill to the north. In the dense forest to the south, the alliance army was infantry-heavy, with no cavalry other than the personal guard of the general leading it.   The Dercian army was marching through the forest, and they knew they were walking into an area perfect for an ambush, but they had to get to Dragons Head, and they knew the alliance were close by, so they could not march around the forest. 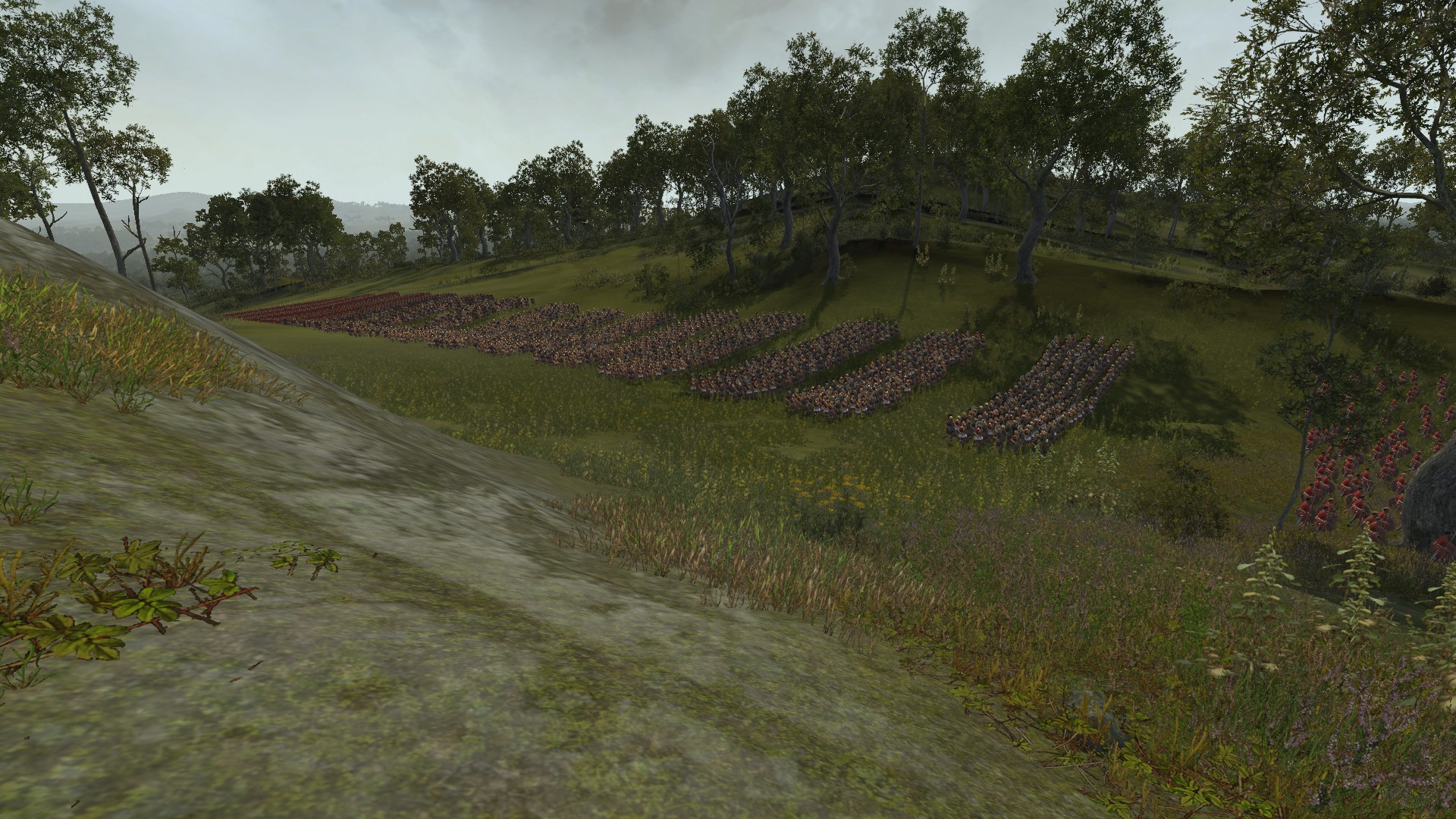 The battlefield consisted of the dense Rime forest covering a hilly terrain, not leaving room for many roads big enough to support large armies. Due to this, many armies from both sides chose to use extra days to march around the forest then through it as it was prime ambush territory. Still, because the Dercians had to beat the Alliance in the race towards "Dragons Head", the general opted to go through the forest.

The engagement began when a rumour passed through the army's ranks that it was weird that they could not see or hear any animals nearby. As soon as the whisper reached the general in front, the alliance troops began to rain down arrows and stones, and from the north side atop the hill, the alliance rolled down giant logs that tore through the front of the Dercian army. 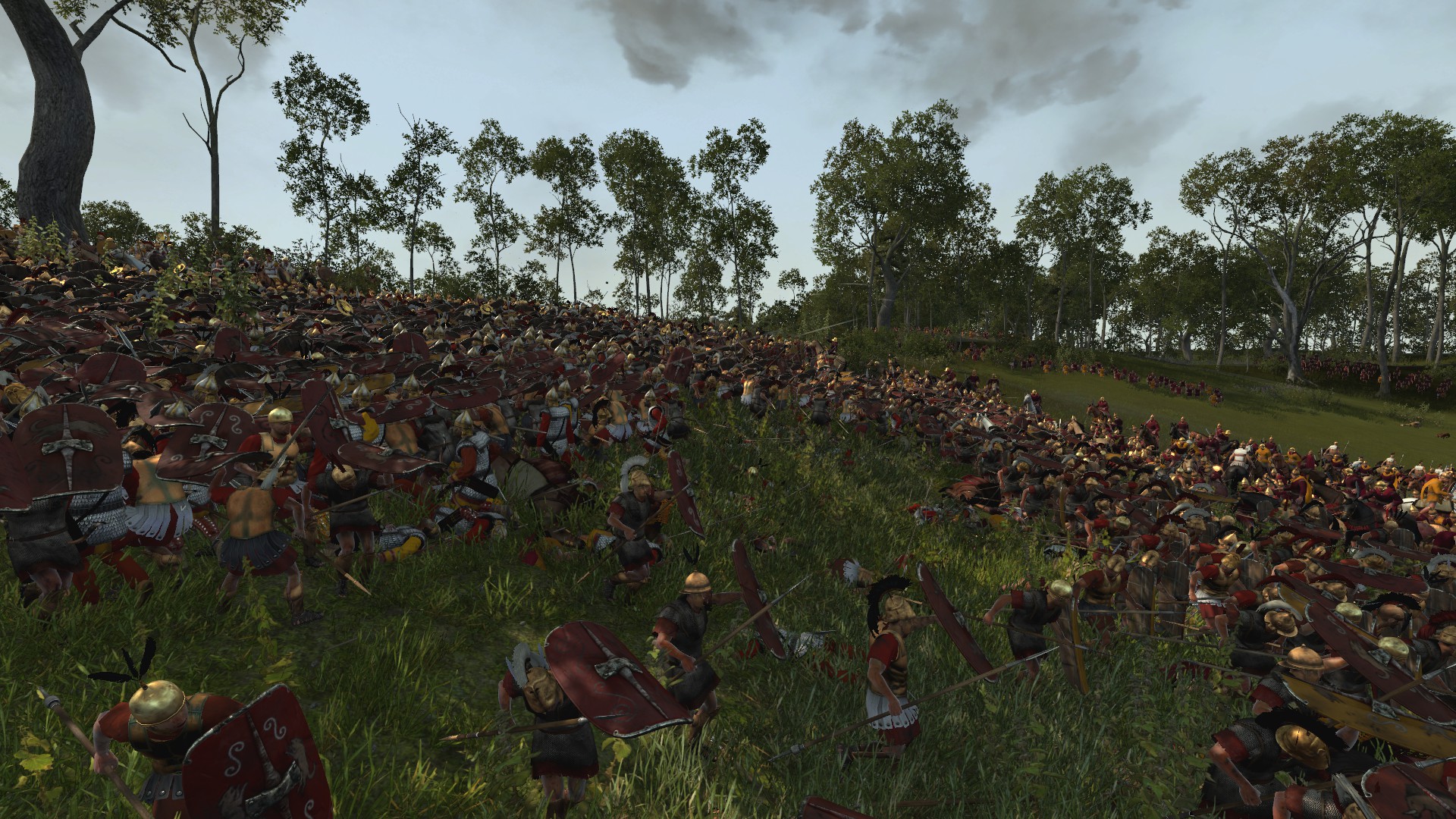 hard fighting - Screenshot of Rome Total War
The Dercian general was wounded by a stray arrow to the shoulder and fell off the horse after he passed out, so the only reason the Dercian army wasn't destroyed was due to their morale and training; the officers of the different sections of the army reacted quickly when no orders from the top came and began to order their troops to split their ranks into two, with one facing north and the other south, after having shelters from the rain of arrows for several minutes, the Dercians came under attack from the infantry and close quarter fighting began with the alliance having the upper hand for most of the battle due to their belief that the Dericans would break soon. It was only after losing what the alliance general estimated to be a majority of their forces that the general began to get doubt that they could win.

Why are they not running? Bloody Pearlhal, they dont know when to give up

Some Dercian officers could wake up their general again and bring him to safety in the centre of their force, while some mages could stabilise him and stop the bleeding.   During several hours of fighting where both sides could push the others back, the Dercians lost more and more soldiers, but after the surprise of the ambush had faded, they were able to trade most kills two to one. When the night began to fall, the alliance general decided that it was not worth it anymore lives and gave the order to a retreat.   After the battle, most of the Dercian soldiers just stood there, not believing that they had survived and now began tending to the wounded and giving the dead a proper send-off.

Temporarily halted the advance of the Dercian army into the southeastern regions of Derica for around two months. The remains of the army had to be absorbed into the replacement army that ended up taking the town.

The Dercian army was able to secure the resources of the Dragons' heads which were vital for both sides of the conflict. With the resources, they supplied their armies with more powerful weapons, such as flamethrowers that could be equipped on the Aquillia class class in the Imperial navy. The legions would be equipped with Firebombs that would come in two versions, with the first version being a smaller handheld firebomb that the infantry could be equipped with and was meant to be used either during pitched battles were it was to be thrown against the enemy as they came charging or it could be used by the infantry when they would defend a city during a siege where the bombs could be dropped on the enemy as they climbed up the walls. The second version was much more extensive and was intended for use in the artillery and could, like the smaller version, be used in pitched battles or during sieges, both offensively and defensively.
Included under Conflict
First unification war
Conflict Type
Battle
Battlefield Type
Land
Start Date
4th of Fira, 125
Ending Date
4th of Fira, 125
Conflict Result
Pyrric victory for the Kingdom of Dercia
Trivia:
The battle is called "Battle of the Dragons Head", although it took place more than a day's march from the town.