The Tu Empire is the first declared sovereign on Mir, located on the continent of Insennis. Established by the initial survivors of the War of Souls, they arrived in their home of mid-western Innerheart early in the Second Era, just after the war ended. It is believed they were initially founded at the Pits of Mir before Shayy's demise at the hands of Stenok took place at the location, forcing humanity to flee. They see themselves as a culture special and above other sects of humanity because they were first approached and helped by Eyinan and Vybor in the urgency of the destruction taking place immediately after Shayy's death.

Being a Crowned Republic, the Tu Empire is ruled by both a monarch and council of representatives of the smaller territories that make up Tu. While on this senate resides 7 people appointed to represent their region by the monarch, it is also made up of a few other key positions.
This group of twelve individuals make up the ruling senate of the Tu Empire, and are the main source of legislation of themselves and the monarch, who often come to heated arguments, having different agendas and with the monarchy's power dwindling in recent years.

To maintain and protect their territory and enlighten the rest of the world to their cultures ways while providing security and sustainability to their subjects.

Founded soon after the War of Souls ended, they are the oldest nation on Insennis. While once encompassing nearly the entire western half of Innerheart, they have lost much of their land over the centuries. Beginning with the Zhao Khanate, who separated from the Tu Empire in 2E456, because of a fracture in the political climate of the time. It was a peaceful separation, with neither side seeking to draw blood, and because of this the cultures of both nations remain closely related. They still share a heavy focus on religion, specifically in verse-like poetry with a focus on tone and musical scoring, with the Zhao Khanate adopting darker themes to their music and texts compared to Tu.

With the expansion of the Republic of Seva of in the early 3rd Era, beginning in 3E003 with the intrusions of Sevan forces into Tu lands, the two nations came into conflict with one another. A bloody war ensued, with Sevan inevitably backing up having a disadvantage in the rocky terrain of the Tu Empire. A portion of land in wester Innerheart remains contested by the two nations, but hostile action has not been taken in hundreds of years. The locals of this region are largely unaffected by the disagreement and Sevan officials outright refuse to even acknowledge the claim by the Empire in the first place. 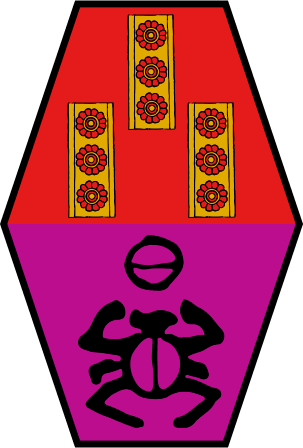 You can read more about the currencies of Mir here!
Location
Innerheart
Controlled Territories
Neighboring Nations

Answering: "Write about an ancient kingdom, nation or empire in your world."
Visit Gerrit_Dodd's Competition Page Check all other answers to this prompt Competition Homepage