The Sentinel Mountains (часовые горы) are the main mountain range of the Kingdom. It crosses the country from west to east and got several branches. This range is known as "imposing and inhospitable" because it got many pretty high peaks and is surrounded by, in many cases, untouched nature. These characteristics turned this place into a symbol of wilderness.
This range got its name because these mountains are seen as "Stone Sentinels" who guard the forests and valleys. Some scenes of "Seeking for the Lost Northern Stars" happen in this natural location. 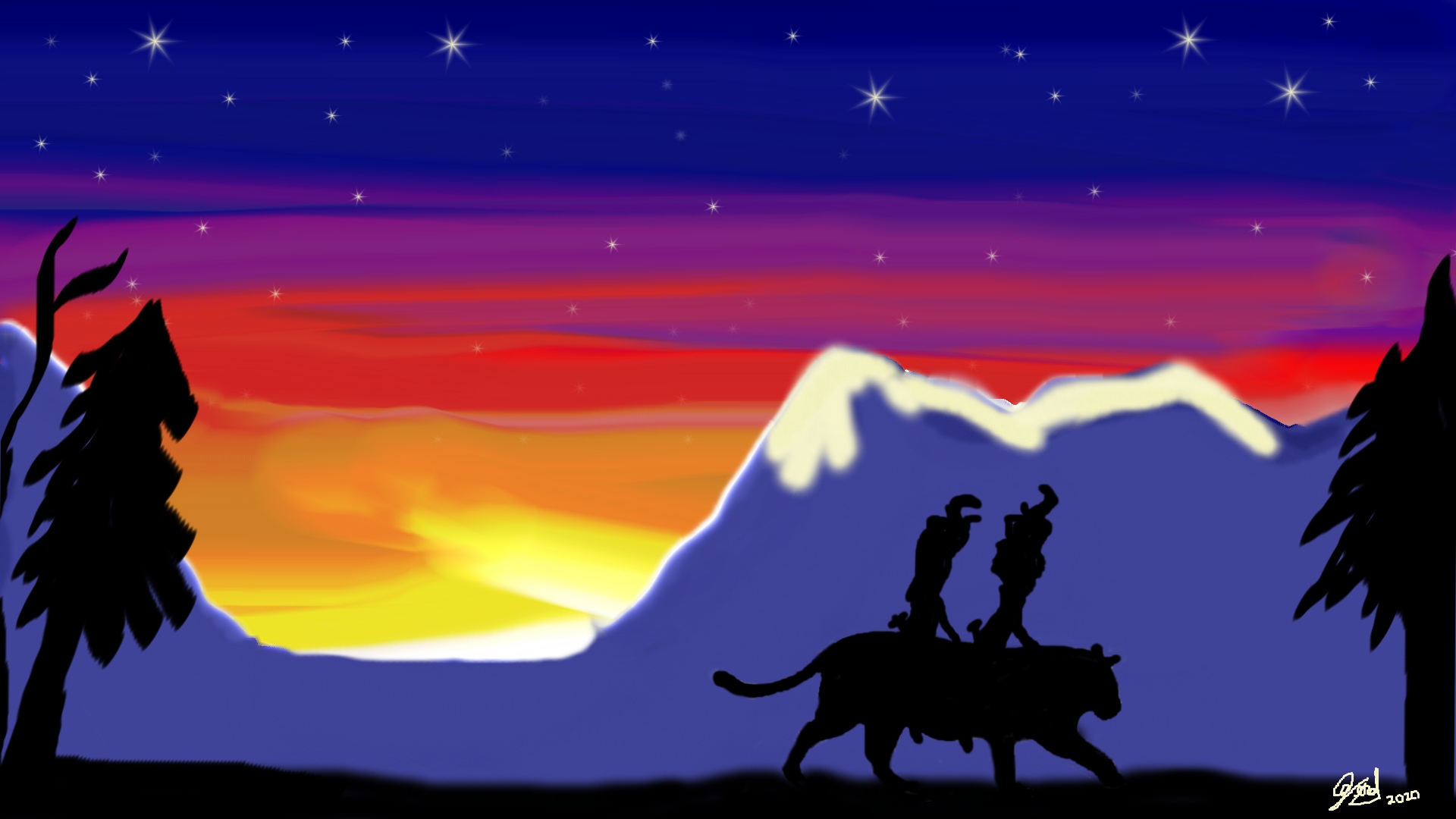 "They walked through the virgin forest, while the darkness was slowly fading, as it was time to start a new day.   The owls were hiding, to leave their territory to the famous golden eagles, an animal that the Moskovar nation had so much respect and appreciation that over the years it ended up becoming its most recognized symbol in the world.   The sounds of the night were silenced, and the symphony of the birds that had not emigrated with the arrival of winter began to sound. The sun, with its golden rays appeared behind the Sentinel Mountains, the imposing and inhospitable mountain range that crosses through the empire. Dyeing the dark sky with orange, yellow, red and pink shades, it offered a wonderful sight in sight that was magnified by the immense peace of the early morning, far away from any human settlement."
— Excerpt from Seeking for the Lost Northern Stars describing a sunrise in the range.

The average height of this range is around the 4.000 meters, with some remarkable peaks around the 6.000 meters of height and many minor mounts and valleys. Most of peaks remain snowed during almost the whole year due their height and some got sharp borders due the erotion caused by the flowing of glaciers. The most common rocks that are present in these mountains are igneous rocks like granite and basalt, and metamorphic ones like Gneiss. This range got several volcanoes and even one of its highest peak. 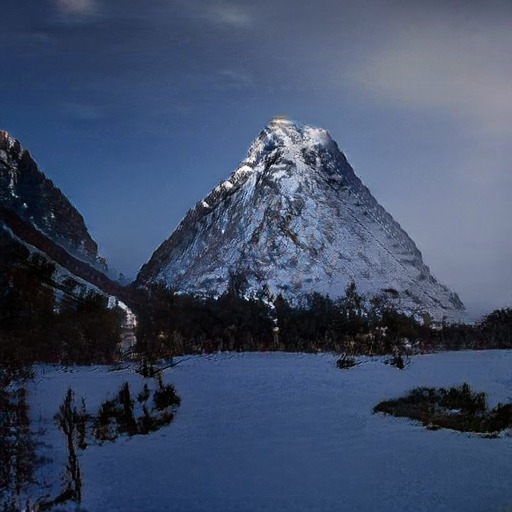 Volcano by Geraldine Escriva using Nvidia's Gaugan
The Sentinel mountains are also the born place of several rivers that flow through the country until reaching the seas, reaching the sea, feeding lakes and ponds or even getting underground or vanishing during dry periods. 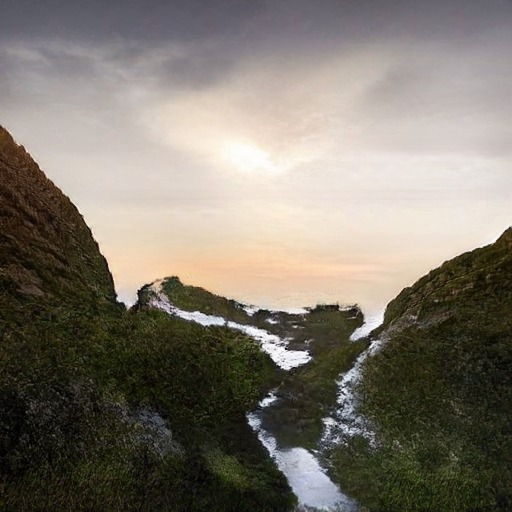 by Gege16
Many of the mountains got also caves and underground galleries system, some of them have been explored and are used for mining minerals, gemstones and building materials, while some others remain unexplored, keeping secrets and feeding a lot of myths and legends. The caves got geological features as stalagmites, holes, platforms and some of them even got rivers flowing beneath the surface and ponds formed by the water that filtered from the outer world. The hydircal erotion had molded a lot of lurking and curious shapes to rocks blocks and stalagmites, making some of the caves look like a threatening but magical underground wonderland. 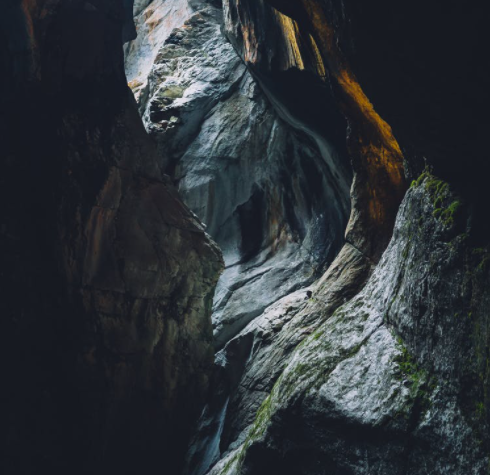 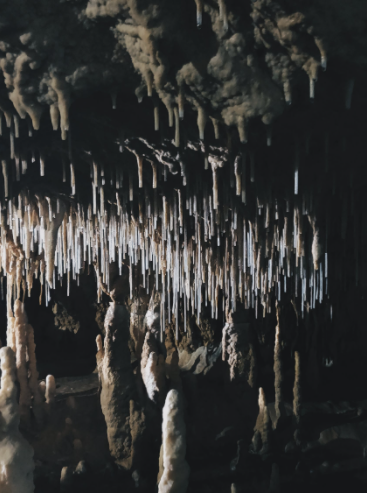 by Dids
In regions were volcanism is present, it is common finding fumaroles, geysers and thermal ponds.   Among the Sentinel mountains it is possible to find several landmarks of an outstanding natural beauty for example the Lake Lamu  which is known for its crystal clear water and some localized phenomena.

The range crosses the country longitudinally and got some branches perpendicular to the main one so it passes through several environments as forest, steppes, grassland and tundra. It creates a barrier to the humidity of the wind from the sea, as most of the rains fall over the side of the mountain that's by the side of the sea and the other face of it is usually drier. The height difference also plays a role in the differentiation of ecosystems, as the lower peaks got older and more developed soils, which means more vegetation and life overall than higher ones. In high mountains, is easy to see how the height determines the kind of vegetation, as the trees are noticeable in lower altitudes, while higher ones got just grass or small bushes adapted to faster winds, thinner air and snow coverage during most part of the year. The peaks themselves usually are naked land because the soil hasn't developed there, it is just the germinal rock itself. 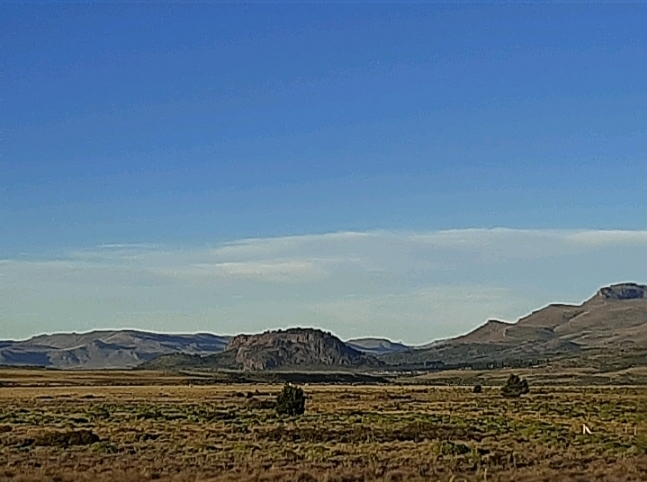 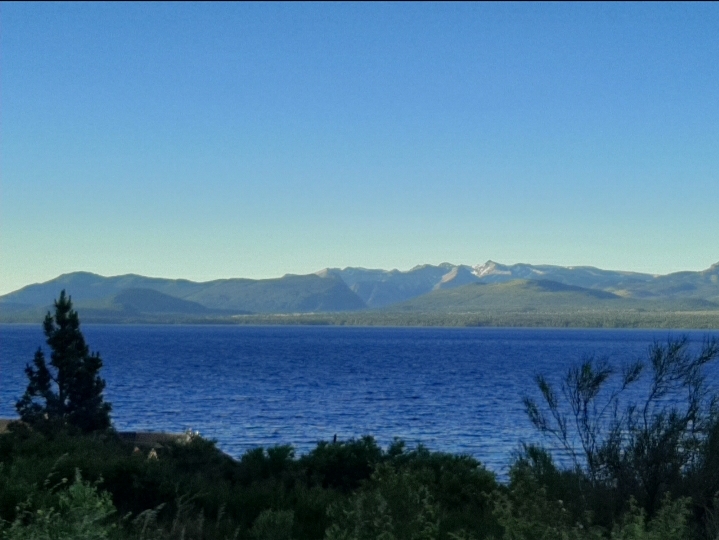 If you hear strange voices talking from your back, DO NOT TALK THEM BACK.
— Popular Moskovar proverb

There's a lot of stories about Supernatural creatures and events surrounding the Sentinel Mountains. As many of those mountains are located in remote places that haven't been fully explored yet, the possibilities of risks (natural and supernatural ones) are almost infinite. It is known that the area of the range that's close to the tundra is the most enigmatic one as not all the explorers who had visited it had turned back alive. Sirins ( bautiful women with the body of a bird whose lovely songs are so beautiful that them distract the explorers, making them get into stupidly dangerous situations like falling from a cliff), leshi and demons, are some of the supernatural creatures that are said to be found in the most remote and dangerous regions of the range. There are also many natural

A particular and pretty mysterious event that happens in the mountains near the tundra are the disturbing voices. People who adventure on going there, specially if they are alone can hear whispers from their back, but when they turn no one is there and the place is absolutely silent. These voices tend to disorient and perturb the explorers because their lack of a visible emissary. It is said that almost everyone who had take a journey seeking for The Lost Northern Stars had heard them. None of them had returned alive so many speculations are around their nature and what they say or their effect over people. Some people believe that the mysterious speakers are demons whose goal is making the explore experiment their darkest thoughts, and seduce them for becoming their worst version of themselves while other people say them are from a different but unrecognizable nature. Listening to them may had caused madness, paranoia and pathological greed which could had lead to explorers distrusting and even killing their own mates. A place in which these voices are very noticeable is the cave and gallery that leads to Alioth 's prison. There's a famous traditional proverb, which is quoted above that refers to these voices but also can be used for warning children about strangers in the forest. 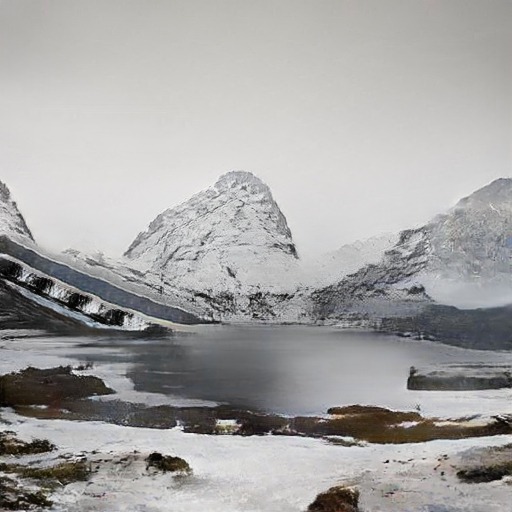 There is a very well known relation between mysterious howls that are heard in the night and the beautiful aurora borealis, whichs origin could be related to The Lost Northern Stars legend. Northern Lights are common during winter in the northern region of the country, as them can be seen almost every night by the people who live in the remote places of the tundra and the northern taiga. As the Sentinel Mountains reaches to the northern region of the country, in many summits is possible to see them too. As it happens in forests or in other places that are not located north enough for getting natural northern lights, if them appear in the sky above southern mountains followed by a distorted howling, it is a sign that is better to run away. It is said that staring in the same place or falling asleep while hearing them can bring nightmares and are a signal that bad things are coming. 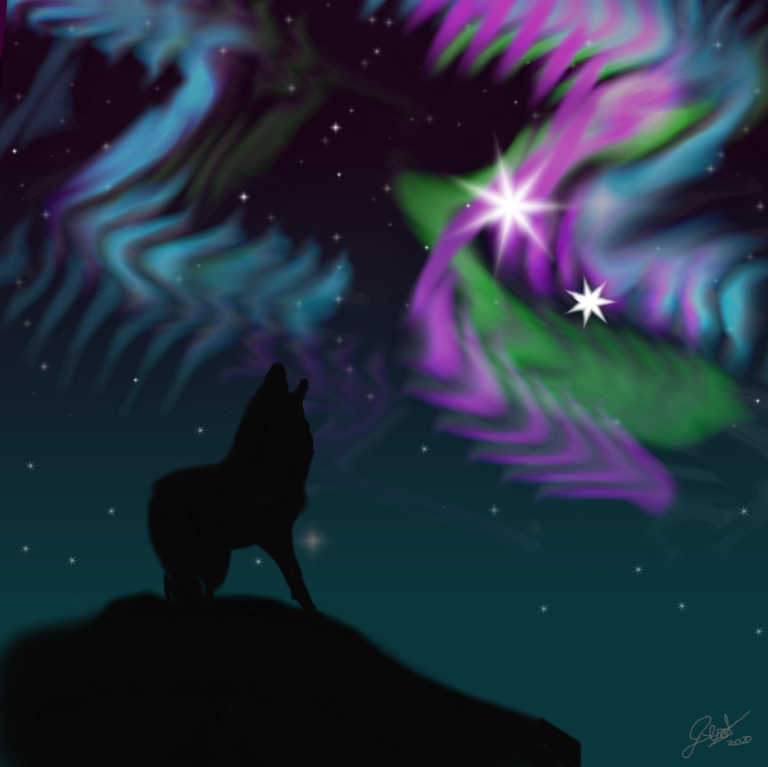 Howling of the Night by Geraldine Escriva (Gege16)

Natural mountain related phenomena happen in the Sentinel Mountains just like in any mountain range. Among them we can find avalanches, mud flowing, stone collapsing, fast winds, rains, snowing.

The life forms that can be found on the environments surrounding the mountains depend of the biome of the region. About mammals, wolves, squirrels, reindeers, wildcats, tigers and many othes can be found at the feet of the range, specially in the forest. Going high in altitude, some animals that an still being found are foxes and small deers. In the underground, moles, lizards and other small animals can be found. Talking about flying animals, birds got a remarkable presence, specially golden eagles, the bird that gives the range and the kingdom itself the nickname " Golden Eagle's domains". Owls, woodpeckers, crows, blue Jay, sparrows and many other species of birds and some insects like beetles, dragonflies, flies among others live in the range. Inside the caves, bats, scorpions, spiders, snakes, lizards and many other creatures adapted to darkness live without getting too much contact with humans besides miners who work in the caves and explorers who decide to use them as shelters.   When it comes to flora, as the most mature and fertile soil is at the feet of the range, is possible to find the most vegetation in this place. In the forests, pines and other coniferous species are the most common, among maples and other deciduous trees. Berry bushes, fruit trees a flowers are so part of the forests near the mountains. When the surrounding environment is a steppe or savannah, the vegetation is mostly formed by some trees and more grass an small bushes. Mountains around the tundra got as representative vegetaation lichens and grass.

This place provides many natural resources to the population of several settlements. From the surrounding forests people get wood, berries, animals for fur and food. From the mountains themselves, mining resources are remarkably noticeable and them go from iron used for every day tools to precious gemstones and minerals. Freshwater is obtained from the mountain rivers. This crystal clear water Is pretty pure  compared to the one from lower rivers as its high flowing velocity prevents the surrounding sediments to color the water and it got almost no fishes.
Type
Mountain Range
Included Locations
Owning Organization
Moskova
Inhabiting Species

Competition Homepage
In response to the prompt Describe a geographic location beneath the surface - what can you find lurking there?

I like the "perturbing voices" part... As a friend of mine always says it normal to speak with yourself, the problem begins when you start to reply...

Thank you a lot, Luca!! :D I appreciate you like it and yeah, that's a good saying xD

An excellent article. The pictures are very pretty, and I loved the section about all the supernatural stuff that happens to the explorers!!