The Kunae are a small Atranaean population group originating from the continent's south. Spread across a few small islands and the coastline they are used to a colder climate and predominantly make a living as farmers and miners.   The Kunae's history is dark and characterized by peril and slavery. Coming from an area rich in rare resources but a region hard to defend with limited forces, they often suffered under attacks and neighbouring nations' attempts to conquer their lands. Over and over they found themselves enslaved and sold across the continent, sought after for their skills particularly in metalworking, artistic abilities, and proficiency as healers and herbalists.   While the Kunae have a low number of naturally born mages among them the few are indeed powerful - and therefore have most commonly been targeted by foreign forces, killed or taken away to further weaken the Kunae's defense lines.   When prince Zerenda of Astairus left Atrana on the mission to conquer Ivendarea but then decided to not return, many Kunae followed him across the sea on a whim. As much as Zerenda had been branded an outcast they had for a long time felt as outcasts on their own continent. While they had recently regained much of their freedom after another long period of living under foreign rulers, the civil war beginning to brew between Zerenda's siblings threatened to end the peace once more. Before being dragged into another conflict that wasn't theirs, to heal the warriors of their former slavers, to die in fights they were forced to participate in with little to no gain, they fled Atrana in large numbers.   In Ivendarea they hoped to find a home in which they would find acceptance, where cultivation and magic were honoured crafts, not means to an end. But as it is often the case, the reality didn't quite end up matching up with their idealizations, as the Nyr don't make a difference between them and other Assadin invaders, and the other Assadin groups of Ivendarea still often treat them as second class citizens.

The Kunae's original brand of Azash is slightly more choppy sounding than of central and northern people, but over the years their accent has become a slight blur of different dialects due to the varying occupiers in their lands.   The Ivendarean Kunae's accent is barely indistinguishable from the one of other Assadin ethnicities. It was originally heavily based on the dialect spoken in Astairus but over the years slightly slurred and intertwined with Trade and to some degree even Nyrval.

While in Atrana the Kunae still struggle with their cultural identity and heritage, after so much was taken away from them, what defines and unites the Ivendarean Kunae is the act of fleeing Atrana and building a new life on this new continent.   The Kunae are hard workers and see themselves of cultivators in landscapes actively fighting and defying and attempts of settlement. They are not known for being prideful, but they do take pride in the work they do and don't shy away from hard manual labour and challenges others might not dare to tackle. "Take a deep breath and get to it!" is a sentence that can be heard quite often in Kunae communities.   Furthermore the Kunae aren't known to be great warriors. Few of them are found in the offensive branches of the military, and most would shy away from physical confrontation. Their few mages are predominantly healers and alchemists, but those that possess natural magical abilities are often very powerful compared to an average Assadin mage. Without warriors and a low interest in fighting, the Kunae on Atrana and Ivendarea alike rely on defensive strategies in conflict, turning nature itself against their enemies or blending in with it in an attempt to sit an attack out undiscovered.

Through decades, centuries even of enslavement and being displaced from their homes, the Kunae lost great parts of their culture and history. All is a blur, and their cultures intertwined so much with those of neighboring nations that it is becoming harder to tell them apart with every passing century.   Here lies the largest difference between the Kunae of Atrana and the Kunae of Ivendarea. In Atrana the Kunae struggle to define themselves and hardly have a history of their own to look back on. They are farmers, miners, herbalists... and that is it. The Kunae of Ivendarea though are defined by shedding their bounds and renouncing all allegiances, fleeing into a better life far away from the constraints of Atrana. While in Ivendarea they still don't quite enjoy the same status as the Kessem or Eesse, they greatly value their new found freedom. Also, in certain matters, they even are in the advantage. They more quickly managed to mingle with and form friendly connections to the Nyr and Kitu due to cultural and historical similarities in regards to religious believes and way of life. Furthermore they are also better adapted to Ivendarea's harsher climate, originating from a rather inhospitable stretch of land themselves.   As a whole the Kunae are very family oriented and stick together, helping each other out against all odds. Children are considered a great gift, twins in particular are almost automatically considered soulmates with a special shared bond.

With the reputation of a polite attitude and diligent work ethic, the Kunae are generally well-liked and do their utmost to uphold this reputation. It is frowned upon to question authority, such as parents or mentors, but political and religious debate are encouraged as long as no participants in the conversation are against it. The reason for this is that through political or religious means the Kunae suffered the most oppression in their history, hence the increased suspicion against official institutions and government.

The Kunae's clothing is often characterized as "simple and practical", but this doesn't quite do it justice. Their designs are not as bold and colourful as for example the Kessem's but in their simplicity lies a lot of beauty. Colours are carefully matched, stitching, seams, and other details are meticulously made and placed. The Kessem rely heavily on the use of natural fibres and materials, incorporating horn, wood, furs, and leather into clothing made from linen and wool.   Stemming from a rather cold region the Kunae are also best adapted to Ivendarea's harsher northern climate and often unpredictable weather changes, and their well-made winter clothing is worn throughout Ivendarea by Assadin of all backgrounds.   Kunae fashion can also be characterized by being versatile and sturdy. Often clothing is worn in several insulating layers, and due to a generally muted and natural colour palette combining different clothing items that fit together aesthetically is easy. The Kunae might be "simple farmers", but they do have a refined sense for art, beauty and aesthetics.

The Kunae are skillful artisans, blacksmiths, woodworkers, architects alike. Their buildings are known for intricate carvings in wooden beams, and even with scarce resources they have a reputation of being innovative and making the best out of a difficult situation. Their buildings are made predominantly from wood and stone, insulated against cold winter nights and mountain winds, built partially underground or into the mountainsides even.

Stendell Shieldheart - a renowned blacksmith from the time of Zerenda's Conquest. He forged Zerenda's Crown and founded the small settlement Stendell which was eventually named after him, east of the Skyreach Mountains. Notably, while being of Kunae heritage, Stendell Shieldheart originally came from Astairus and was among the first wave of Assadin arriving in Ivendarea, so among most Kunae he is considered a bit of an outlier and not necessarily a good representative of their past and struggles.

As an Assadin people the Kunae honour nature's forces and beauty. Even more so than any other groups, as a people of farmers, they are very dependent of nature and its whims. To honour it in every day life they grow their hair out long and keep it natural, for practicality's sake though tie it back, braid it, or wear headwraps to keep it clean and out of the way on the fields. Some colour their hair with natural dyes created from plants and roots. Most Kunae have fair hair that takes on dyes well.

In Atrana, life can be short and harsh. Courtship there isn't particularly elaborate, but nonetheless romantic. The Kunae are firm believers in soul-mates: in the same way that the comet Assa broke into seven pieces that long to be reunited, bonds like these exist between individuals. This doesn't mean that an individual can't be whole and lead a fulfilled life on their own, but finding their counterpart(s), their match, will complete them in a way they couldn't have imagined otherwise. Many Kunae for this reason search and long to find a soulmate, and there are spiritual ceremonies that supposedly can aid in speeding up the search. Notably also, there isn't just one soulmate for each person, but several - and a soulmate also doesn't necessarily need to be a romantic partner. It can be a best friend, a sibling, a mentor, even a parent.   In Ivendarea, where the Nyr share similar believes of soulmates that meet again and again through their cycles of rebirth, the Kunae are further encouraged in their search. Living a much more stable life in Ivendarea than in Atrana, they actually tend to commit to a partner later in life than they might back at home.

Relationships for the Kunae are a serious matter, and many don't even enter a relationship if they feel like the person wooing them is not their soul-mate. Since individuals can have more than one soulmate, polyamorous relationships aren't unheard of, but generally speaking they are more rare.   As mentioned, soul-mates also don't have to be romantic partners, and so it can occur that best friends enter in a marriage-like relationship, maybe even raise children together, without being romantically involved.
Encompassed species
Languages spoken 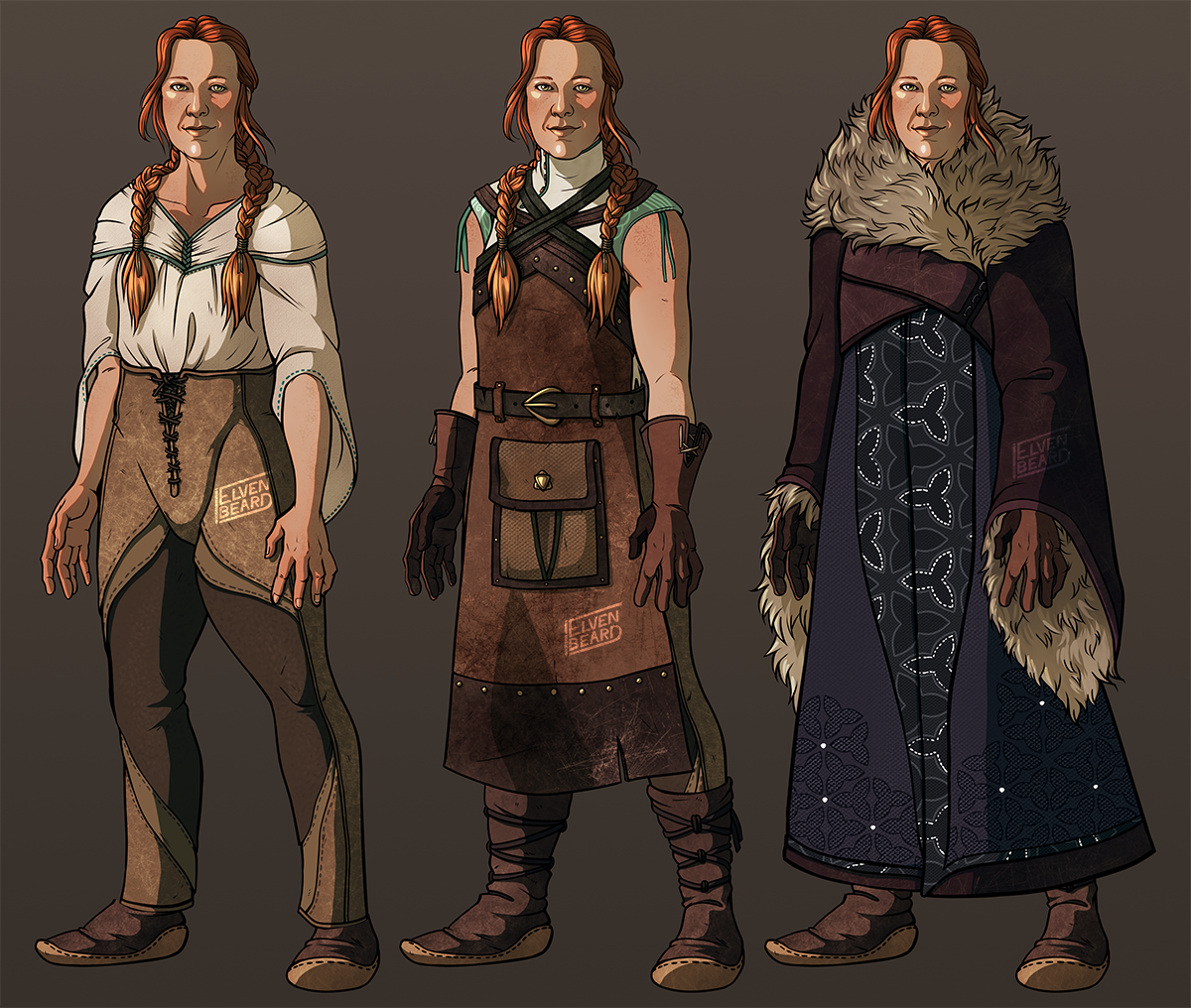 A Kunae individual in various outfits of daily life. The linen shirt on the left with shorter sleeves is definitely only worn in warmer months or at home. Below the blacksmith's apron in the middle the person instead wears a slightly thicker tunic with detached sleeves. The warm and heavy winter coat on the right is a true display of an artisan's talent with the detailed embroidery of geometric patterns.