Through Fire, Ice, and Ashes

The Eesse of northeastern Atrana are a people of traders, sailors, and inventors. Known to stick to themselves and keep out of foreign affairs some consider them indifferent, while the Eesse see themselves as pragmatic - maybe even a little cunning. When two people quarrel, a third rejoices, is a saying they live by. One of the main reason that contributes to this isolation is the Eesse's homeland. A largely desolate and deadly wasteland it consists only of comparatively few insular communities spread along the more lush coastline. The coastal cities are connected via rivers and the oceans, as travel by sea has always been safer than travel on land, hence the Eesse's long history of naval exploration.   Their travels leading them beyond their nation's borders early on, and low interest in engaging in wars as those would only harm trade and the fragile balance they are able to upkeep between sustaining their cities without restraining the growth of their population too much, contribute to the famed Eesse neutrality.   Their mentality of balance and making the best out of dreary situations, brought forth many great Eesse diplomats. In foreign countries they often fill the honored and important position of neutral third party mediators in conflicts, be it a business quarrel or even political negotiations.     In Ivendarea the Eesse make up about a third of the Assadin population nowadays, many being of medium to higher standing and working in official institutions from the military to the Academy of Saratheas. When Zerenda began his quest to conquer Ivendarea, the Eesse provided the ships and sailors for his forces, as Astairus wasn't quite equipped for a journey this far and long at the time. The Eesse also for the first time in a long time had reluctantly agreed to form an alliance with their western neighbors, hoping also to gain something out of the expedition. In the same manner that Zerenda decided to not return back home, many of the Eesse ship captains and crews decided to stay after discovering Ivendarea's potential as a splendid, peaceful homeland.

The Eesse's dialect is full and round sounding, slightly more melodic than the Azash spoken for example by the Kessem. As far-travelled sailors, Trade is basically a second mother tongue for most Eesse, and not few use it just as often, if not more than Azash in everyday life.   As inquisitive learners most Eesse in Ivendarea also speak Nyrval and are often present as interpreters, be it during business negotiations or the interrogation of criminals. If an Eesse interpreter is present, no other involved party will be able to keep a secret from them.

Coming originally from a very warm location the majority of the Ivendarean Eesse live in the nation's south in close-knit communities. With little resources far spread between their cities they always have had the urge to explore and are well-versed traders. Among the Assadin nations the Eesse have the reputation to build the best and fastest ships, and their knowledge about navigation with the help of sun and stars is unparalleled in Atrana.   Despite harsh living conditions the Eesse have a general positive outlook on life, living day by day and making the best out of every moment. They value education and learning, as it can provide the edge necessary to survive, keeps the mind sharp, and supports the survival of the community as a whole. The majority of Assadin scholars in Saratheas' Academy are of Eesse origin.

Honesty and openness, curiosity and exploration, a level-headed mind and eloquence - those are the Eesse's core values.   Of course a child is not born with those traits, hence why Eesse upbringing can actually appear rather strict to outsiders, even if it is actually loving and caring in its intentions. Children go to school no matter their background or social standing, an at least rudimentary education teaching necessary life skills, writing, reading, mathematics, and so on, is mandatory in all communities. It is so natural to the Eesse that education should be free at least in those early years that anything else seems unnatural.   Despite being predominantly known as diplomats and traders, the Eesse also bring forth great warriors, particularly mages. Magic is tightly knitted to the Eesse's religious believes, magical powers being a gift of nature that must be treasured and cultivated. Most Eesse tend to take on roles in society that allow a use of their powers more often, be it as warriors that defend their homes against outside influences, or as priests and healers, nurturing their communities from within.

To not be always polite and honest would go against an Eesse's honour. Their best diplomats and speakers are eloquent enough to touch upon even the most controversial subjects in such an objective manner, speaking about even the most uncomfortable truths, that everyone part of the conversation will leave the room satisfied, maybe even enlightened and rethinking their old ways in the most ideal scenario. On the other hand this has directed a decent suspicion at the Eesse many times, as they seem to have a magic touch for manipulating a situation in their favour. Their honour would forbid them from doing so, but of course there are crooked individuals who have hurt their people's reputation in the past.

Donned in flowing fabrics with bold patterns an Eesse individual usually stands out. With fashion they express their joy for life, but it can also indicate status and rank.   Certain colours are only worn by dignitaries, others are reserved for married couples, scholars, students of a specific craft, merchants, craftspeople, and so on. Many elements of nature, be it depictions of flora and fauna or more abstract patterns symbolizing the flow of a river, the elements in general, or the scales of a reptile, are featured in their designs. To outsiders Eesse fashion is predominantly colourful, but for the Eesse themselves an outfit can showcase an individual's entire story of their life at a glance. This of course has a social background: by wearing one's story literally on the sleeve, it is easy to treat each other with the necessary respect and openness everyone deserves. No secrecy, no misunderstandings, everyone can be upfront and honest with each other.   Of course some individuals of more questionable morality will dress in clothes that hide their true identity, make them seem to be of higher or lower standing than they actually are for example. In Atrana this can actually be a punishable crime comparable to assumption of authority, but in general it is simply considered sketchy and rude and will make the individual doing it seem very untrustworthy.

The Eesse's love for bold shapes and colours is reflected also in their art and architecture. Furthermore, a notable feature of Eesse homes is that they often are an extension of whatever is naturally present already in the landscape. In Atrana there is an Eesse city built entirely on platforms spanning along a steep coast, fastened on overhanging rocks above and floating over the ocean far below.   A notable Eesse community in Ivendarea is Holtwind, where houses and walkways between them have been partly set up on posts but also incorporate the ruins of a long-abandoned temple of the Nyr that had almost been swallowed by the swamp. During the rainy season when the water rises, people rely entirely on boats to move around in their village, while in the dryer months stairs and ladders lead up into their homes.

Despite coming from a land dominated by a desert seemingly hostile to life, the Eesse know that one can find ways to flourish even in great peril and isolation. This is reflected in their attitude, being fierce and cunning, but at the same time determined, respectful of each other and all living beings. They are passionate and determined fighters at heart, more often with their words than weapons, but not shying away from defending their homes and loved ones with force if necessary. The Eesse love bold shapes and colours, incorporating both in their fashion and hairstyles, their often thick and densely curled dark hair allowing for beautifully braided and three-dimensional styles.

Diplomacy and a bold attitude don't have to be mutually exclusive - in politics and interpersonal relationships alike. Courting someone is often a playful back and forth, a little like an argumentation why one partner is the right for the other, with words chosen carefully to not push for too much too soon.

A relationship between two Eesse is a strong bond built over many years - and very hard to break apart, be it childhood friendships or romantic partnerships. Despite their reputation in other nations to never take sides the Eesse are fiercely loyal to their loved ones and would literally "walk through fire, ice, and ashes" for them, as one of their sayings goes.
Encompassed species 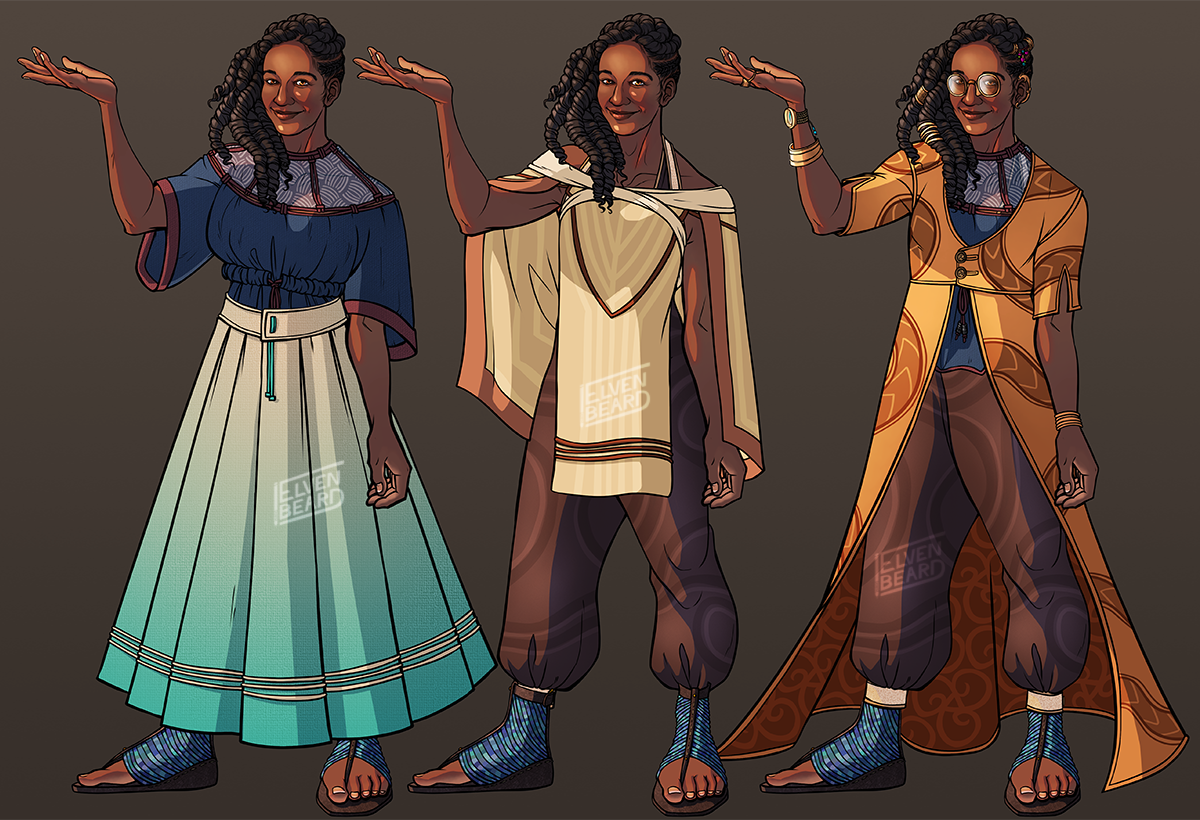 An Eesse scholar dressed for various occasions. The clothes on the left, relatively simple in shape and colour, are a casual outfit worn around the house or maybe while shopping in a market square. The blue tones hint to the individual's family having relations to traders or seafarers, while the splash of yellow marks them as a teacher. In the second, slightly more formal tunic, the yellow undertones are stronger. This would most likely be worn at more formal events while still being comfortable - also inform others to approach with the necessary respect. The outfit on the right stands out with the strong yellow robe, showcasing without a doubt a high standing as a Royal Scholar with its bold ornaments, while still incorporating a few splashes of blue to signify and honour the person's background.