The Kessem of northwestern Atrana make up the majority of the Assadin population of Ivendarea. Led by Zerenda onto the shores of the Nyr's homeland a little over 500 years ago, the peninsula has become their home as much as it is for the Nyr. Many came not only to conquer, but ironically to also escape the political instability in their homeland Astairus, which shortly after their settling down here fell and broke apart during a civil war. While it is true that war and battle lie in the Kessem's blood, maybe the Assadin's as a whole, a great majority of them are not in favour of most past battles fought on Ivendarea's grounds and violent actions by the Omrai Omvalis.

Like all Atraneans the Kessem's mother tongue is Azash. The majority of Kessem in Ivendarea are also fluent in Trade, but only people coming from an at least somewhat educated background speak more languages than that.

Before the fall of Astairus the Kessem were the most influential monarchy of Atrana, with a large nation under their rule and great power over their neighboring countries and vassals. The Kessem of Ivendarea who never got to know modern Atrana, where Astairus no longer exists and Zerenda's bloodline has long died out, hold on to this memory of glorious days, striving to recreate this glory in their present. At the same time they also keep in mind constantly how fragile power can be - and to what great responsibility it is tied.   Kessem children are brought up with the virtues of great warriors and leaders, which go far beyond just physical and mental strength. To move forward in the eternal fight one needs the ability to think and plan critically and strategically, to be determined and passionate, and to not back down in the face of peril. They are taught to become the best, strongest possible version of themselves.   Conflict, fighting, war are present in Kessem culture even in relatively peaceful Ivendarea. Duels are common place when one party severely wronged another - in Atrana these duels can be fought to the death depending on the severity of the insult. More commonly though all participants are unarmed or only carry blunt weapons so that pure physical strength and willpower make the difference in the outcome of the fight.   Symbolic fights are also carried out as a coming of age rite. Even in Atrana they are evolving into more of a symbolic ritual with no real stakes, but in ancient days actual fights were carried out between young adults who had to challenge a seasoned warrior to prove that they were ready to face the responsibilities of adulthood. The outcome of these ritualistic fights weren't and still aren't what mattered though. It was important only that the young adult was ready to face this intimidating challenge on their own, demonstrating initiative and the capability to make difficult decisions.   This is one of the main reasons why the arena of Westpoint is particularly popular among young Kessem. While battles to the death are forbidden, many young people love to fight to demonstrate their strength on these proving grounds, earn decent coin in tournaments, and bathe in the cheers of the watching crowd.

Coming from a continent shaped by war, many of the Kessem's traditions and customs revolve around the so-called "eternal fight" that must be fought. In Ivendarea war is much less common place and so much of the Kessem's old rites of passage involving fighting and physical strength aren't as commonly practised anymore. They have evolved into symbolic, ceremonial rites signifying important steps taken in their lives.   The "eternal fight" is, in the simplest way, life and survival. The struggles an individual faces growing up, taking on new responsibilities, facing challenges in the shape of people with clashing opinions, personal tragedies, disasters, disease, but also the many small victories in every day life are part of the eternal fight. The Kessem are sometimes seen as very stubborn, but also immensely enduring of even the worst of peril and challenges, because every setback they treat as a means to test their strength, an obstacle they are willing to overcome at all costs.

Kessem are open and upfront, they are not in favour of intrigues and secrecy. Their strong sense of honour is reflected in the way they lead their interpersonal relationships and the way they fight their battles. Winning a Kessem's trust is difficult, but once it is earned they will honour and hold on to it - they are the most loyal friends and allies one could wish for.

The Kessem stem from a portion of Atrana dominated by desert, with little water and vegetation but rich mineral veins buried in the earth. Since the majority of them are at home in Ivendarea's warm south, their clothing is light and airy. Colours are bold and warm, and their clothes often feature sharp geometric shapes reminiscent of their bold attitude. Similarly their jewellery clashes with the long, airy tunics, resembling armour almost, as it it forged from shards of metal, woven from fabric scraps, and then pieced together to create a varied mosaic of shapes and textures.   Notably, many Kessem also wear body- and facepaint or are tattooed. Bodypaint is often applied for religious and other ceremonies, or simply for aesthetic reasons. Common symbols are forces of nature, such as the sun, or paints are layered thickly on top of each other until they crack, resembling the dry earth of their old homeland Astairus. Tattoos, being permanent changes to the body, often bear much deeper and personal meaning, such as overcoming a grave tragedy or achieving a great victory. They might also show allegiance to a certain family or faction, but those tattoos are more commonly seen on Atrana nowadays, not in Ivendarea.

The Kessem are not necessarily known as artists or scholars, but instead as outstanding engineers. The love for mathematics is reflected in geometric patterns found on clothing, in floor tiles, roofs, paintings, or tattoos.

Zerenda - the conqueror of Ivendarea; youngest of three siblings prince Zerenda of Astairus always felt misplaced and not in his father's favour. Rebelling a lot against the kings authority he received an ultimatum: to conquer Ivendarea for Astairus. Zerenda though had his own plans, and instead of handing over the conquered nation he decided to keep it himself, renouncing his father's authority and the continent Atrana as a whole. He is an outcast, a rebel, and a symbol of hope and new beginnings to those who followed him.
Leoros - the current ruler of Ivendarea, a descendent of Zerenda; he is the first Ivendarean ruler to marry a foreign monarch, in this case princess Therstina of the neighboring nation Darthonis
Alund - the older brother of Leoros and the king who led the Assadin forces against Iovana Rava during the The Revolution War and emerged victorious, securing his people's regency in Ivendarea
Ulden - the father of Alund and Leoros, who was murdered by the Omrai Omvalis led by Erraia and Aella Panthil'y; his murder in the long run caused the Revolution War

Like many Assadin the Kessem pride themselves to be talented warriors. An athletic and strong physique is commonly promoted and favoured, no matter the gender. Most Kessem have thick hair, from straight to pronounced curls and everything inbetween, and they prefer to wear it long while putting a lot of care and effort into keeping it healthy. Long, natural hair to them symbolizes nature's beauty - and they honor how nature created them by letting their hair grow freely.   Reasons to cut one's long hair short may vary overall. According to legend, Zerenda cut off his hair, even shaved his head, after renouncing his allegiance to Astairus and Atrana. Similarly, after severe changes in one's life people may symbolically cut their hair - the more impactful the event, the more hair is cut off.   Another reason can be the donation of one's hair at a temple. Hair as a religious sacrifice can express the hope for a good harvest, giving up a part of oneself to show allegiance to the forces of nature, or might be an expression of gratitude for great personal luck or accomplishments. Depending on which temple the hair is donated to, it can be treated differently. A Sun Temple might simply burn it in a sacrificial ritual. The priests of a Rain Temple often offer the fabrication of wigs for people who lost their hair due to accident or illness. In a Stone Temple or Tree Temple items of everyday use are created, for example fine brushes, rope, fabric, and so on.

An aspect of business and social standing is an ever unchanged part of Kessem courtship. It isn't unheard of that parents find partners for their children and arrange unions for them, but in Atrana this is much more common than in Ivendarea. Courtship is polite and never too personal, honouring personal space. To outsiders it may sometimes appear rather stiff or cold, but it is considered common courtesy to not get too personal until both parties involved have agreed to deepen the relationship.

In Atrana and Ivendarea alike it is still common practise to pursue long-term relationships that further an individual's own social standing and connections. Particularly when it comes to marriages, they are mostly treated like a business relationship rather than an emotional bond. Both parties have to gain something from the marriage that brings them further in life - love can be a part of a marriage, but it isn't essential. Hence, even if it isn't common, it is socially accepted even for married partners to have one or several lovers on the side. In Ivendarea marriages out of love are more common than in Atrana, but they also mostly occur among people of lower social standing with less influence.   A marriage is always a bond between two people, a contract is written beforehand and signed by both parties who have equal rights and standing in the relationship - hence why it can be used as a steppingstone to a higher social standing for the socially or politically lower-ranking partner. It is not completely unheard of that individuals are married to several partners at once - all with their separate contracts - but it is a rare occurrence tied to a lot of bureaucratic effort.   Terms and conditions in marriage contracts vary - they might revolve around politics, number of children (if any) to result from the union, business relationships, money, worldly possessions, and so on, and are as individual as the people involved themselves. Also, if desired, marriages can be agreed upon for only a limited amount of time, until a specific goal is reached - e.g. a certain amount of children has been born or a specific wealth has been reached, etc. - and then end with the partners going their separate ways or extending the contract. In the same manner both partners have the right to annul a marriage at any given point and by this divorce their partner.
Encompassed species
Languages spoken 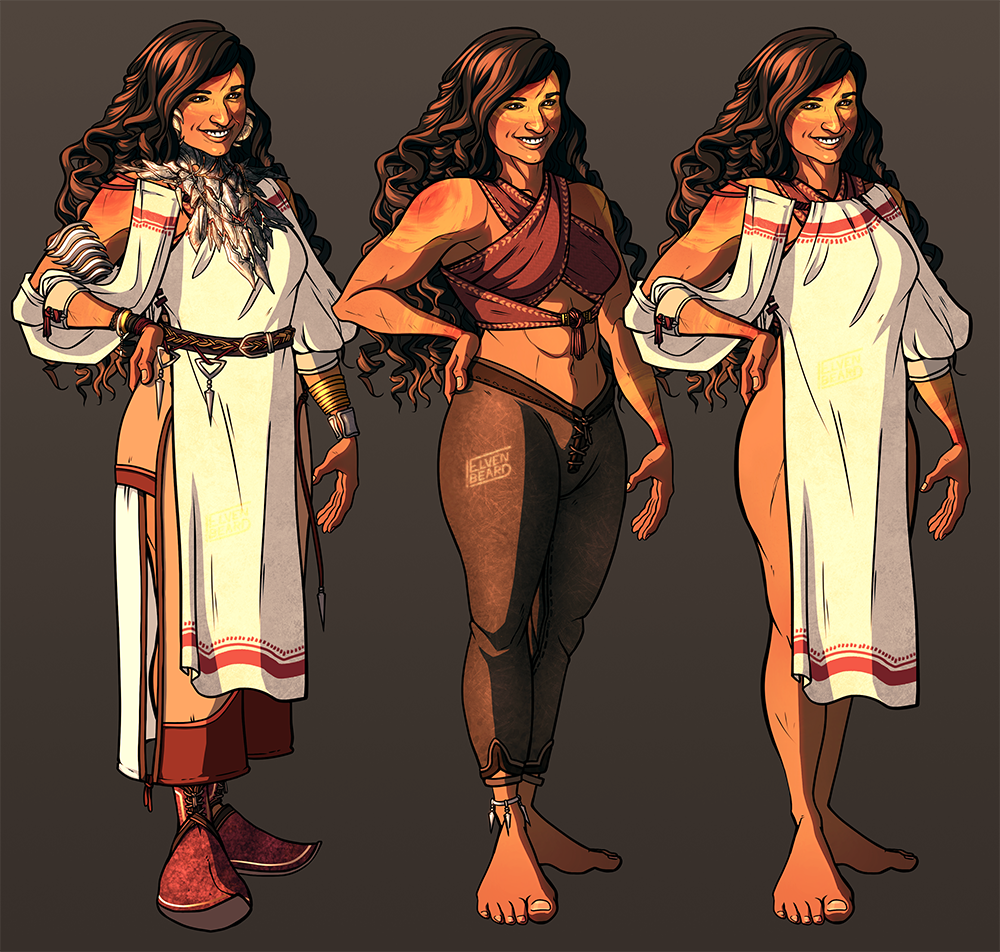 A middle-class Ivendarean Kessem donning face and bod ypaint depicting a radiant; an inhabitant of Maan Ganyr or a surrounding village as her lightweight clothes suggest.

Answering: "Describe a culture in your world which has particularly warlike traditions."
Visit Elvenbeard's Competition Page Check all other answers to this prompt Competition Homepage