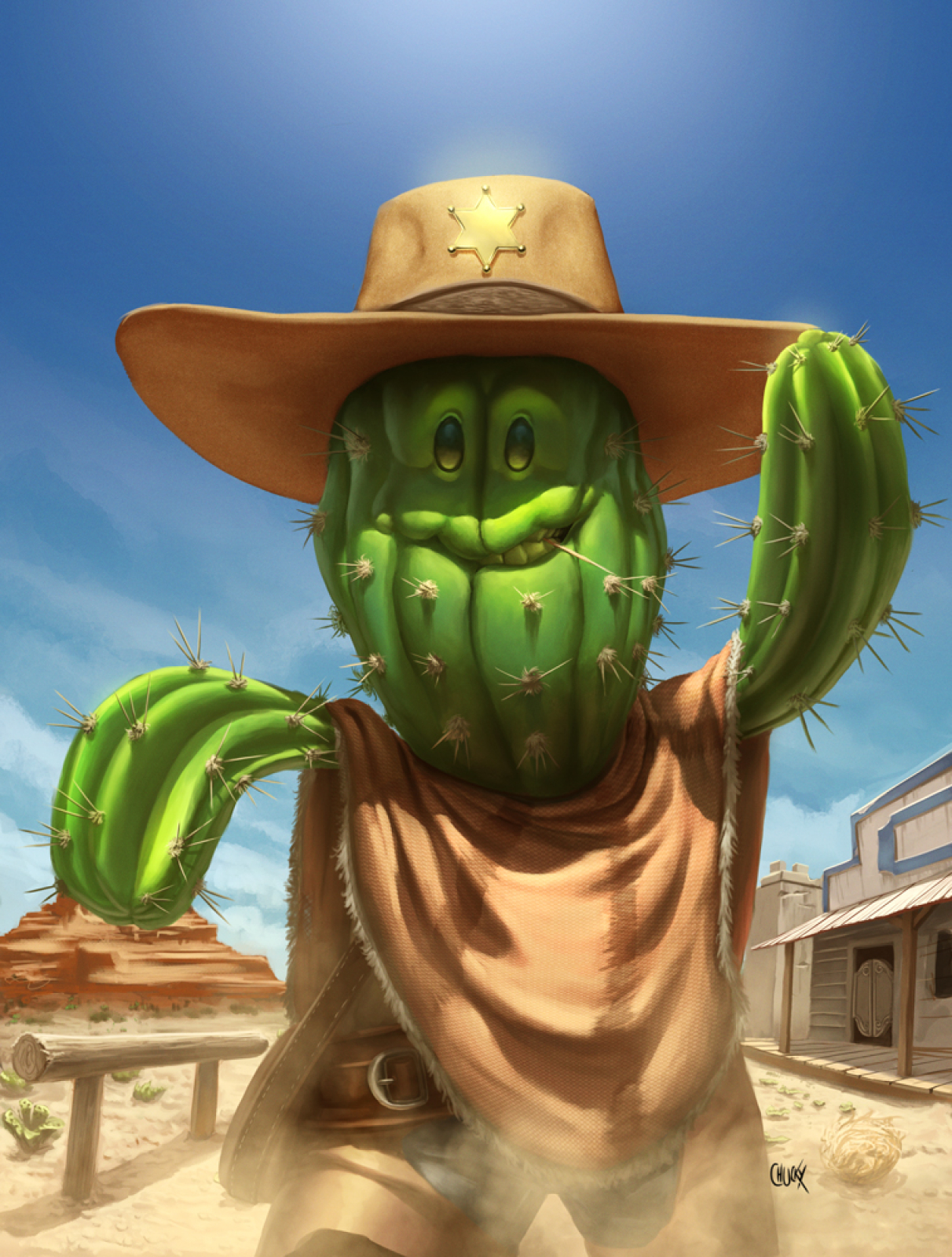 Fastest spike in the west.

Formed from a particularly potent amalgamation of energies within a desert Demesnes, Dazz is a walkin', talkin', straight-shootin', mescaline chewin' cactus. With a roughly humanoid shape and a well-honed sense of justice, Dazz roams the world of Ithekshem bringing criminals to their rightful end. They are a scourge upon the bandits and outlaws of Itheksehm, a terror of fast shootin' and deadly hugs. They are... A cactus for justice.

Think you can draw that before you get a faceful of spikes, son?

Dazz is a walking (or they would say, wanderin') cactus with articulated limbs and partially opposable quill-thumbs. They have two eyes and a mouth filled with quill-teeth, though they only chew on food for flavor, with no real stomach to house it. Dazz thirst only for justice... And water, sunlight, plus the occasional shot of whisky. A poncho and hat are usually draped over the Cacti form, impaled into place by its quills.   Behind a spiky exterior (literally, in this case), Dazz is a friendly and animated creature - particularly for a cactus. They make friends where-ever they go with a similar rough-and-tumble style, granting respect as it is earned and holding nothing back when it is squandered. When wounded, Dazz heals much faster than most humans of an equivalent size, and never seem to tire. Cold and darkness makes them sluggish, but they like to claim that outlaws won't find any protection in either.

Dazz's life began sometime after the End of All Things in a powerful Nature Demesnes in the desert. Magic coursed through every part of the oasis wonderland, bringing life and plenty to the wasteland around it. It was in thie melting pot of wild magic that Dazz first opened their eyes and said 'howdy'.   From there, Dazz's story changes everytime they are asked. In one, evil mages came and destroyed the demesne or bound it into a Manse. In others, Dazz met a curious creature called a Beer Ooze from outside the Oasis and decided to see what else was out there. In almost every telling, Dazz eventually recounts how they ran into greed, cruelty, and outlaws, making life difficult in an already disaster-stricken world. Though Dazz's outlandish appearance often drew distrust or at least confusion, they manage to make it long enough to figure things out.   Soon after, Dazz brought in their first outlaw, riddled with quills, and never looked back.   One decade later and the cactus of justice is still going strong. They typically stay within deserts and arid regions of Ithekshem, sometimes riding with a posse of friends when the job calls for extra firepower. Other than buying whisky (and new ponchos), no one is really sure what Dazz does with the bounties, but the Cactus is saying they'll all find out... Real soon.

Dazz can fling their the cactus quill that cover their bodies with just a concentrated "muscle" spasm, with enough force to pierce armor. In at least one encounter, Dazz was able to launch a spike straight through a platemail, but such efforts are exhausting. These quills range in size from a finger (ouch) to dagger-like (oh no), and it's a bad time for anyone who falls in the bounty-hunter's crosshair.   They regrow from Dazz in a matter of days or week, depending on the size, and Dazz usually keeps a bag or two of them, just so they are never unarmed.
Children
The New Reality

*starts to type a comment... can't from laughing too hard...*

I want to like Dazz, but he triggers my people-in-costume phobia even though he is literally a cactus. XD Therefore, I am suspicious of what he is planning to do with the bounty money. ¬.¬

You had me at "deadly hugs," which caused me to laugh out loud.

It's their secret weapon! :D

This is utterly hilarious! Love the whole concept, and the description is wonderful as always!

Thank you <3   The world of Ithekshem is full of all kinds of things, both grim and whimsical, after the End :D

What a wonderful and funny article. That first quote though deserves an award!