Cid La Flaga plainly put, is a mercenary.   Born in the town of Temworth to a poor blacksmith under a daunting star, Cid did what he had to get by, By chance when a traveling Alchemist came to town Cid managed to learn the art of black powder and the art of making things go boom, combined with his skills as a blacksmith he learned from his father, he made his first gun, but shorty after, bad luck came to Cid, his father lost an eye, his mother got sick, so on and so forth....   A few years latter his town was attacked by bandits, Cid helped trying to defend the town, but lost his family and friends during the raid, His skills were noticed and he was given a spot in a band of mercenaries not long latter...   That group, was known as 'The Ivory Roses'   Nowadays he is a lone mercenary doing odd jobs for coin, no one knows what happened to the mercenary band he was with, no-one really cares...   ...Rumour is that they were paid to kill Cid and met the deadly end of his pistol, but Cid says nothing on the subject...   ...Though Cid still caries the crest of the white rose on the back of his coat, and as an engraving on his gun...   Cid has the habit of being a kleptomaniac, he will steal what he can when he can, Anything to further his own agenda, avenging his family and friends...   The leader of the bandits that attacked and killed his family went deep underground. For years, all that Cid had to go on was the man's name: 'Ruben the Nightmare'.   That man is dead, now. Dead at the hands of he and his friends, his home and bandit kingdom taken down by their combined forces. Even that can't make up for the fallen.

Towards Emperor Aneirin 'Cyne' of Aletheia 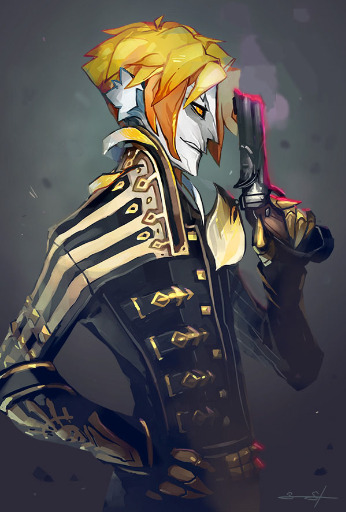