To restore Ashlyn Alarian's memories, the party took part in a ritual at Celesthem Temple that drew on the powers of their gods. As part of this, Licia Galewen, a former member of the party, was switched with Lirien - for what reason, they have not been told.   Lirien arrived confused, yet reassured by a divine whisper. She has since faced persecution from various people because of her race - Kazric, for instance, has openly laughed at her for being half-drow, and Mordred was disgusted by her - that she's mostly ignored, and has been incredibly useful in battle, as her mesmerist tricks have allowed her to bolster her allies as her whip has sliced through their enemies.

No notable scars - faint scars from adventuring, but nothing major. She's in reasonably average physical condition.

Her skin is grey with a slight purple tinge, and her silver hair falls to just past her shoulders.

None as of yet.

Wears nondescript clothing, keeping herself relatively clean but not so much as to draw attention to herself. Likes to blend in.

Uses a whip and hand-crossbow, both of which are safely stored away on her when not in use.

Her biggest failure and greatest regret is that when she was travelling with her mentor and he was attacked partway into the Underdark, she ran, leaving him behind to die.

Towards Emperor Aneirin 'Cyne' of Aletheia 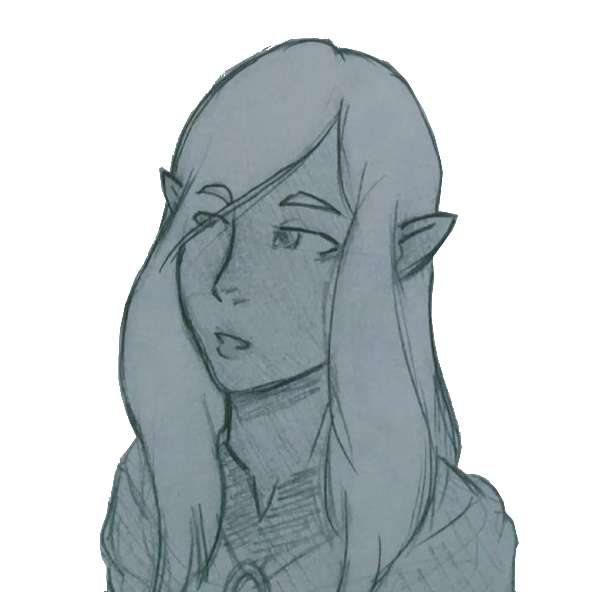 I honestly don't know how he did it, how he managed to live with the drow in the Underdark for years without breaking down, being tortured, enslaved or killed. I couldn't even go a day without giving us away for apologising of all things. The whole place makes my skin crawl, I'm not sure I could pass for a convincing drow if I tried. Next time I think it's cast first then start talking. That will probably get us further. Or maybe not if Pin keeps going off and landing us in these messes, I'm not sure of she was playing the part or is just that dumb to draw attention to ourselves IN A DROW HOUSE. I'm decently certain staying with this lot will be the end of me, but my lady put me with them for a reason and I shall see this through until that reason becomes clear.   At least we got out of there alive though, not sure how true that is going to be about their journey into house Umbra. I felt something... happen... to Kazric. Apparently the rest of the party did as well, through me. I don't know why I (we?) keep having these visions, of everybody and everything being connected, and feeling each others emotions. Guess it's just more about these mesmerist powers that I still don't know about. Hell, the crown prince of the empire hadn't come across my sort of magic before. I honestly don't know if I should keep doing it else we get into more trouble but I'm going to anyway, it has helped me survive so far so I hope it keeps doing so.   Also I'm not sure what Aniks is trying to do, using his 'gift' from a god as a bartering piece with drow like it's his to give? I'm pretty sure all gods and demon lords and other deities aren't idiots so there must be a reason she chose him. I doubt he'd listen though, or he's already thought the same. He sounds pretty desperate to get rid of it so I won't stand in his way. I need to read more about the gods champions and the last time they arose, especially if I am accompanying quite a few of them, hopefully I can find some time when we get back to the surface.