Lightning dragons are among the less common breeds of the eight main dragon species in Isidoro. They live in canyons and valleys, preferably ones rich in iron deposits. Lightning dragons share similar territory to earth dragons, and sometimes peacefully co-exist.

Their ideal territories are iron rich canyons, and they will either make their nests in natural crevices, or use abandoned Earth dragon tunnels; they are capable of digging if they need to, but prefer to use that as a last resort to save energy.

Lightning Dragons avoid heavily forested areas, as well as any places with abundant overgrowth as they are prone to getting tangled within it. 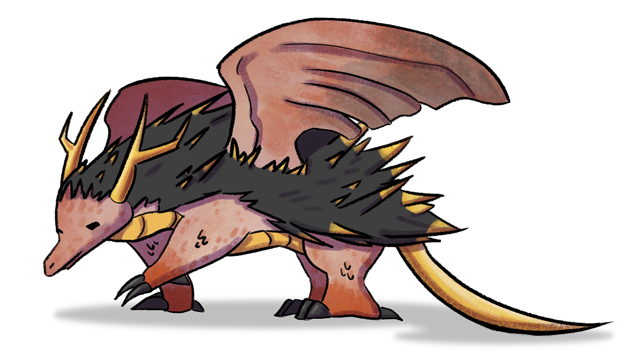 Lightning dragon horns and quills are plated with a thin layer of gold and are incredibly conductive to both electricity and magic. It is not uncommon to see sparks jumping between the golden tips of their quills, or along the prongs of their horns.

While their tail is also plated in the gold, it is used more as a grounding tool for the dragon; they're often found with their tail stabbed into the earth, and it assumed if you see a lightning dragon with their tail in the ground and their eyes locked on you, that you're their next target.

They are usually black or brown in colour, but roll in the soil of their home, resulting in the pale colouration of their wings, snout and most of their bodies.

They are quadruped dragons, and have very short, strong limbs with large claws. Their wings are leather, and are resistant enough to fold against the quills along their back which are plated in gold like their horns and tail.

Lightning dragons are prone to being hunted for their horns and quills. They are magically charged and plated with gold, and as a result can fetch a high price. The practice is incredibly illegal, as is all Dragon hunting, but there are still the rare poachers and hunters who attempt to hunt adolescent dragons.

I just clicked here from the currency article and THESE THINGS ARE SO CUTE I WANT ONE!!!!!