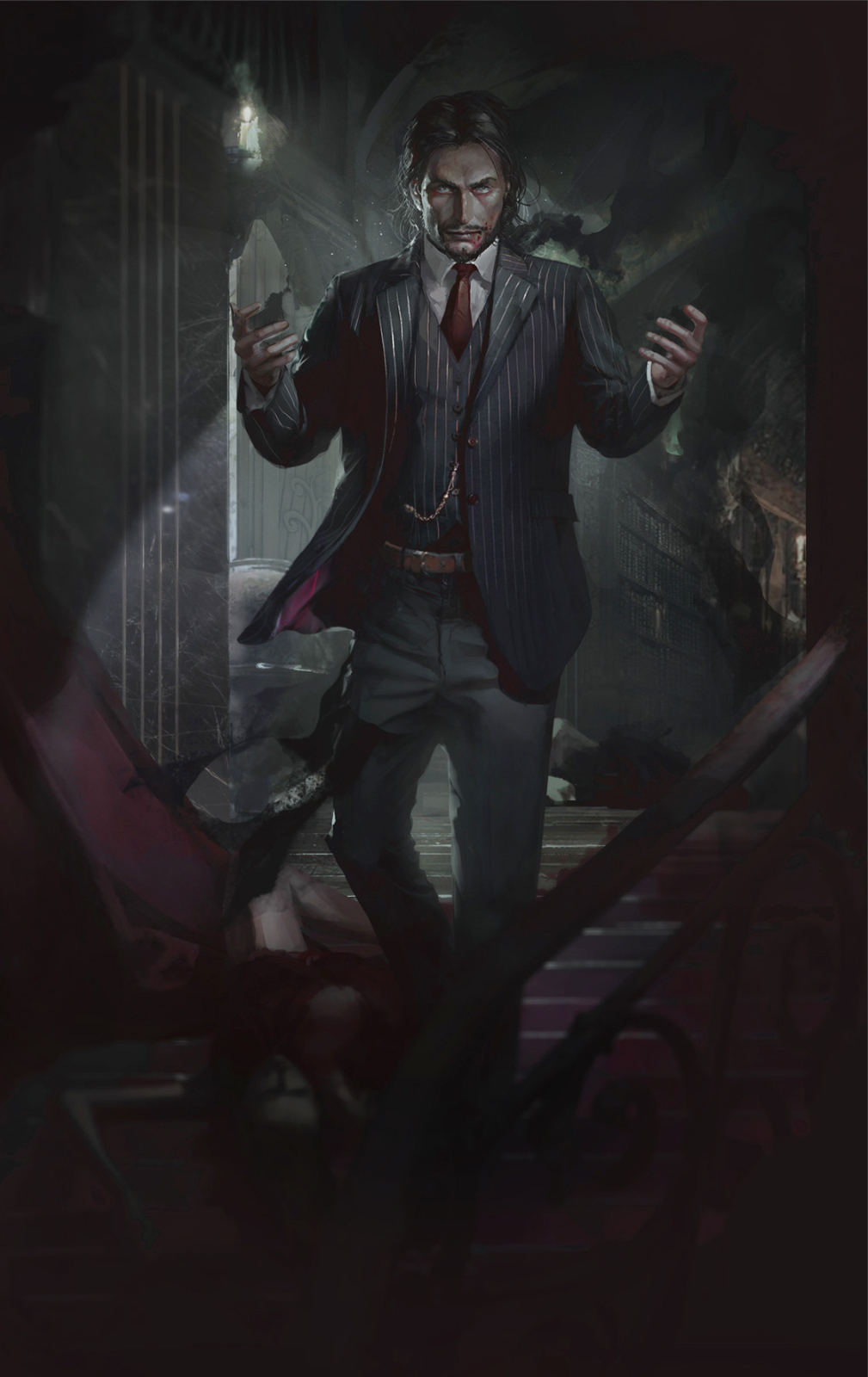 Keldrin - Lord of the Unfallen

The True Herald of The Unfallen
A cloud of dark smoke filled the cramped room, coldly curling around Valdir's feet as he nervously retreated to the back of the room. The smoke coalesced atop of the rooms singular table slowly solidifying into a new form until no smoke remained.   In its place lied a skull with its cap missing, the inside lined with lead and a single lit candle. The flame flickering dimly in the darkened room. Every muscle in his body tensed as a sinister voice rang out from the air around him,   "Hello friend, you have what I seek in your possession. Kindly return it to me and you shall be greatly rewarded...I promise."
- An excerpt from the first meeting of Keldrin and Valdir Fenrir

Like the rest of the divine, it is uncertain when Keldrin first came to be. Many theorize, in fact, that the gods live without the constructs of time, simultaneously existing throughout all of time and space all at once, present in every moment throughout existence. But that is only the ramblings of humankind trying to parse the complexities of the divine.   Though not evil by nature some mortals view Keldrin as such due to his divine portfolio and habit of attracting a bizarre array of followers and devotees. Attracting the likes of witches, necromancers, and other such morbidly interested folks. This has created an ominous figure for children and adults alike to fear and shun.   Despite this common view he is still revered by most of the world and is a common subject in prayers and teachings.

One common teaching is that when children are at a young age they are taught to be respectful and say kind words to the recently deceased. So that when their time comes Keldrin, as the Ferrier of Souls to the beyond, will treat them with the same respect and kindness and allow their spirits to pass unharmed to the afterlife.   Keldrin is said to be able to control the flow of the spirits of the recently deceased as they reenter the stream of magical Ether beyond the realms of the living. And he alone decides whether or not the spirit may rest or whether it will wander the many realms for all eternity.   Of course, no one knows if this is reality or fiction but most folks decide to air on the side of caution and give the god a healthy amount of respect just in case. Trusting that they will not be misguided by the god's hand.

The Rise of The Unfallen

One day roughly twenties years ago Keldrin became bored and decided he wanted a people of his own on the lands of Fyria. The power and influence of a god would only intensify if the number of his devotees grew after all. And these new souls on Fyria would be undying in devotion to him and him alone.   So, instead of directing the souls of the dead towards their final fate he carefully weaved them back towards Fyria and the bodies of the deceased. Allowing them to reanimate and live anew with a newfound dedication to their saviour Keldrin. These new beings would come to be called The Unfallen. These resurrected peoples would have only vague memories of their past lives, some souls would even reside in a different body then their original, but all would be faithful to Keldrin.   His newly realized kin would soon begin appearing in the lands of Heldrin and Cassarei; soon after the first Unfallen would begin appearing in towns and villages across each nation. In typical albeit understandable fashion, most found these new arrivals, unsettling. So much so, in fact, most encounters with the first of the Unfallen would end in bloodshot. With the tools and weapons of commonfolk slaying the newly awakened soul where they stood. Only for them to arise anew moments late. Panic began to spread across Cassarei and Heldrin as news of these new abominations began to spread.   As the number of Unfallen grew so did the fears of the afflicted nations, and soon a coalition army was formed to deal with the threat. Unbeknownst to them, Keldrin saw the growing danger and bid his children coalesce near the border of Cassarei and Heldrin and prepare for war. Soon afterwards the battle would begin, and the armies of Cassarei and Heldrin would clash against the Unfallen people. 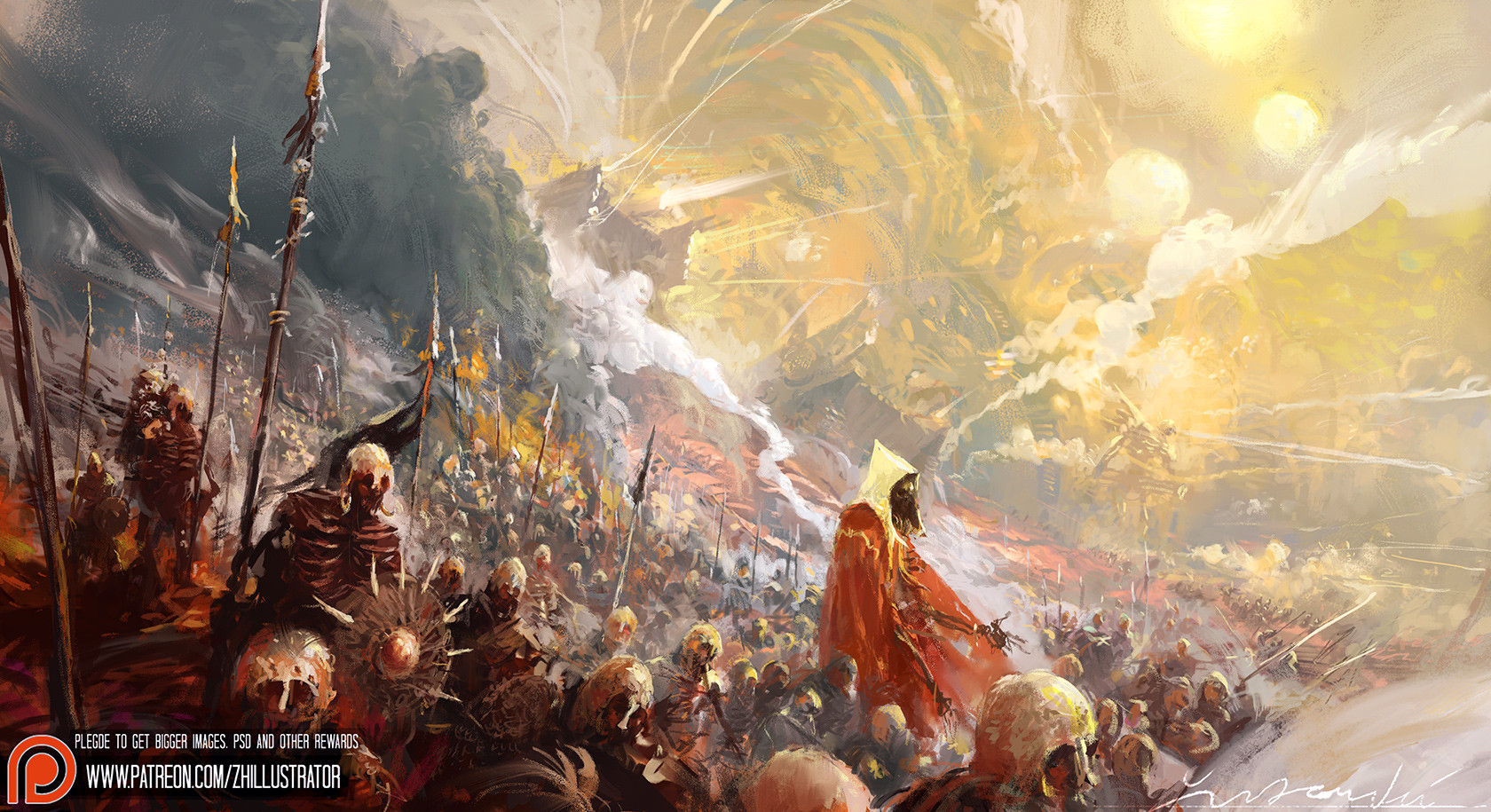 Invasion! by Zivko Kondic
A battle born out of fear and misunderstanding, between people trying to protect themselves from the unknown and people who only sought a home. The battle was fierce, each army fighting with the strength to protect their own. Though the armies of Cassarei and Heldrin would soon find out that this fight could be in vain, as each time they slew one of the Unfallen, the would rise again unharmed moments later. Hours rolled by, and neither army seemed to be gaining the advantage, the armies of Cassarei and Heldrin were vast, but the army of the Unfallen seemed undying. After hours of battle, the leaders of the armies of Cassarei and Heldrin desperately called out for a stay of action, in the hopes to discuss terms. To there surprise, the Unfallen accepted.   After hours discussing terms in private King Thadeus Telvour VIII, King of Heldrin, and the Unfallen warrior known as Vortaech, The First Unfallen, would come to an agreement. The Unfallen would leave the lands of Cassarei and Heldrin and be gifted lands to the south. The Unfallen would have a home of their own, a stretch of barren desolate landscape only they could survive. It would become known as Keldavor or The Unfallen Lands.   In the years since the war Keldrin's Unfallen have grown significantly in size and diversity, with vast numbers pouring into their lands from across the world. Sequestered away from all, Keldrin's own singularly devout peoples. No one knows for sure how they fare within their borders, as none is permitted to leave once they arrive.   Keldrin has been pleased with the growth and success of his people, though he worries still for their safety and continued success. He knows that their connection to this world is tenuous and someday that tether may falter and his people, his Unfallen, could face absolute ruin. 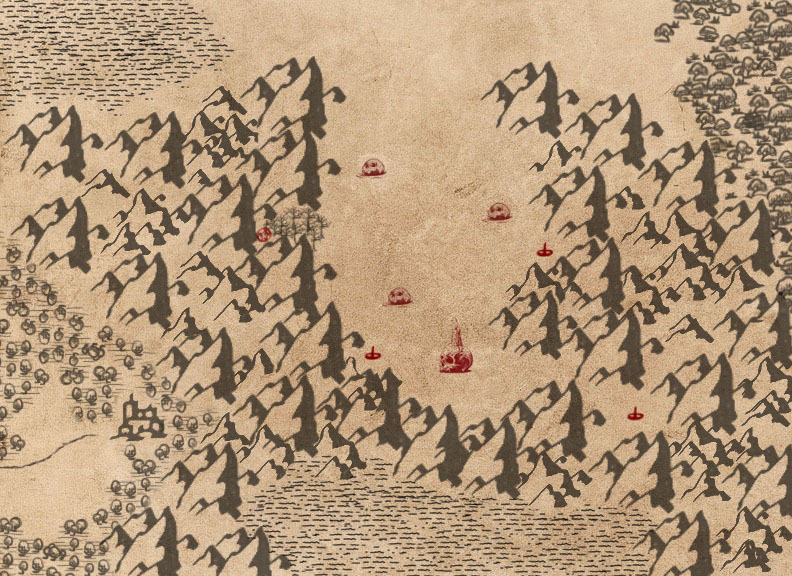 Map of Keldavor by Joshua Stewart

Like all gods, Keldrin is gender fluid and may change his form or sex whenever he wishes to. As such, he has been depicted in many different forms throughout history. In the past Keldrin has been depicted as a small girl with short hair, he has even been depicted in the form of a large raven made of smoke and ink. Keldrin currently wears a black tailored suit with a dark purple button-up shirt. He carries a silk handkerchief in his lapel pocket which is emblazoned with his divine crest.   Currently, however, he is depicted as and identifies as male. Keldrin is not much taller than an average male in Fyria and has a slight build, with long legs and arms. His raven black hair has been left long on top and his slicked back, with the sides and back cut short. Keldrin is clean shaven and has sharp handsome facial features. The only aspect of Keldrin that is depicted the same throughout history is his void-black eyes speckled with a deep purple. 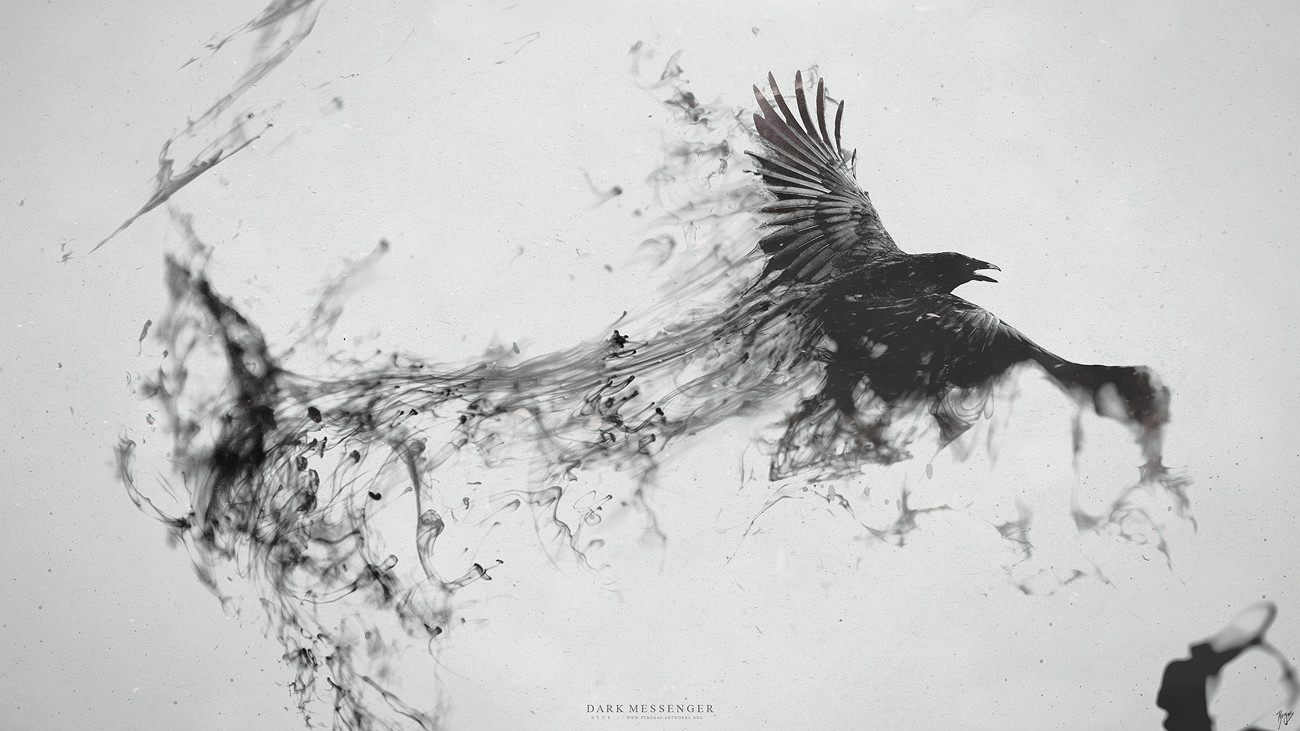 Keldrin's current divine vice is a group of undead followers called The Unfallen that are beholden to him. These people have found their own home in the lands south of Heldrin, in a place they have christened Keldavor, in honour of their father. Keldrin has been pleased with his children's progress and is committed to helping their growth.   Keldrin has struggled to support his children during their time on Fyria as he cannot keep a physical presence amongst his people due to the limitations set upon the gods regarding time spent in the mortal realms. He is actively seeking remedies for this, so that he may have a more reliable and free connection to his children. This is currently only one small problem Keldrin is currently dealing with. A much more severe issue lurks in the void, one in which he may need to rely on old goes to remedy.

Divine Classification
God of the Dead and Patriarch to the Unfallen People
Biological Sex
Fluid, currently depicted as male
Eyes
Deep black with specks of purple
Hair
Raven black, slicked back, shaved back and sides 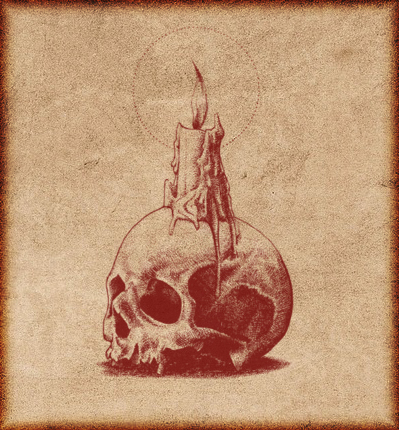 A common depiction of Keldrin's Divine Sigil , similar interpretations show a capless skull with a lit candle set within
Articles that are related to Keldrin