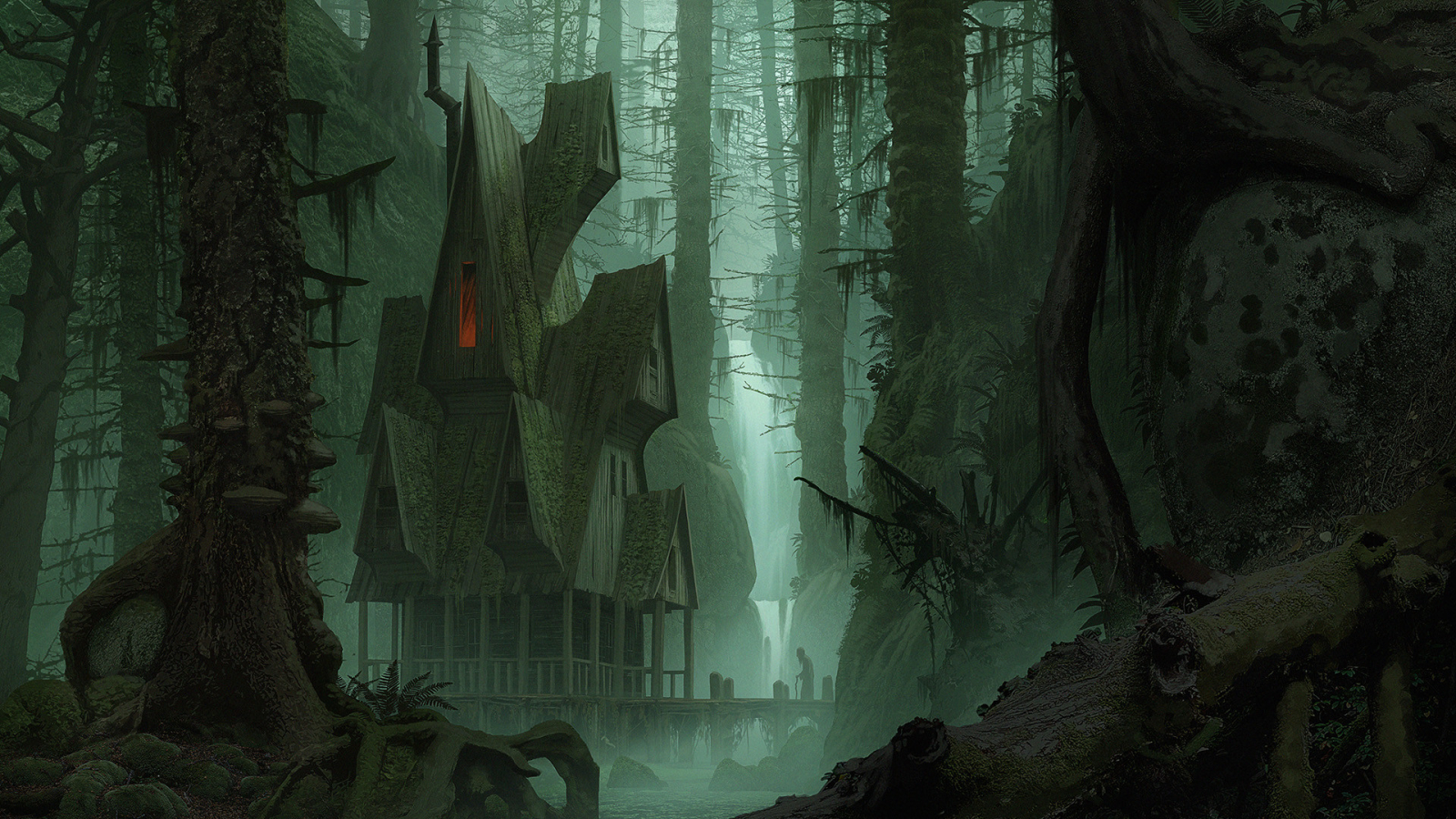 With the back of her tattered sleeve she wiped the thick layer of grime from her looking glass. With a groan, she lent down and peered through its lens, her ageing bones creaking with effort. Beyond the magically enchanted lens, she viewed two adventurers wandering beneath the shade and fog of the forest that lay just beyond her cabin. She wondered what they could want? It had been so long since her last visitors.   With some effort, she stood back up and glanced outside of her window. Antonio was tending to the grounds, or rather he was currently digging varying sized holes in the ground for a reason she was currently not privy too. His large frame bobbed back and forth as he and about a dozen or so of his small gibbering minions trundled about the unkempt lawn.   Antonio was her familiar currently, a rather odd one even by witches standards. A strange fellow, he stood nearly seven feet tall and resided in a large coffin. His long appendages popping out on each side to allow for movement. A small circular hole cut out of the front where only his bright yellow eyes were visible. He looked after her the best he could while he and his minions guarded the cabin grounds and surrounding area from trespassers.   "Antonio! Come here for a moment dear!" she called to him from the now open window.   He dropped the shovel in an instant and shuffled over to her dutifully. He leaned in towards the window, the large frame of his coffin creaking as he drooped to her height.   "I need you and your friends to go into the forest and retrieve two men wandering the forest, I would like to meet them," she said to her familiar.   Antonio politely nodded in return, he turned away from her and grabbed a large scythe that was left leaning on the house earlier. A lantern hung from the opposite end of the blade. He reached in through the window and grabbed a candle, lighting the wick inside his lamp. And with that he and his minion friends head off into the fog of the old forest ahead, his lamp bobbing up and down with rhythmic taps.   She watched him go, wondering what these new adventurers could possibly want from her. Maybe, they could be of use to her. Her cracked lips and crooked teeth formed a sly smile as she thought about the possibilities.

Gertzu was born during a stormy night, in a small cabin in the woods. Her mother, whose name has been lost to time, was a widowed woman struggling with the despair of her husband's death. In this despair is where she made a terrible choice. She conducted a terribly dangerous ritual, one in which that would change the destiny of her and her daughter's lives forever. Below is the story of her birth.

The Birth of Keldrin's Witch

The ritual started near midnight, when the storm came rolling in suddenly, light flashing violently against the fragile windows of the cabin. Heavy with child she began preparing the ritual. She first began by spreading the ashes of her deceased beloved in a small circle. Within it, she placed the skull of young lamb, hollowed out and filled with tallow made from the lambs fat. She lit the candle. Dark chalky smoke began to curl upwards in thin wisps. The familiar smell of smoky fat began filling the room.   Then, a sudden crack of pain shoots through her abdomen and lower back. She didn't have much time, her daughter would be here soon. Despite the pain, she knelt in front of the circle and wiped a small line of wet ash on her forehead. Her husband would give her strength during the ritual. She began to pray. Words dedicated to the God of the Dead, Keldrin.

"I have a request for you my lord," she spoke, eyes gazing listlessly at the snaking wisps of smoke. The pain escalating, she glanced down and saw blood. There was no time left.   "Please, my lord. I have a gift for you," she said panic beginning to rise.   With great pain she rose to her feet, hands clasped in pray to the circling smoke, blood flowing down her dress.   "It is a fine gift my lord, a rare gift, she is yours my lord, my first-born, my daughter," her eyes watering from both the pain of the oncoming birth and the horrid words she had just spoken. The smoke beginning to coalesce and fill the room further. Lightning cracking violently against the roof in sharp booms.   "My husband, I am lost without him! Please bring him back to me and you can have my child as the price!" she screamed, "I cannot bear the thought of losing my child but it is the only way!"   Suddenly, the smoke froze and the sounds of the raging storm ceased. For a moment, even the pain of her daughter's birth paused.   "Such a thing to offer, for such a curiously morbid request." came a sweet voice from behind her.   She felt a strong hand brush up against her neck, chills running down her spine. She knew that her ritual had worked. Walking casually past her, scuffing the ring made of her beloved husband's ashes with his boots. He casually picked up the lambs skull and admired the flame, frozen stiff by his presence.

Keldrin, the God of the Dead, had answered her prayers. He smiled at her, his teeth gleaming in the dull shade of the cabin. Darkness seemed to fester around his body, his eyes so dark it was as if they absorbed whatever light neared them.

"My lord," she bowed her head. He chuckled in amusement, he loved this part.   "Raise your head, my child, your devotion has shown brightly to me," he tucked his palm against her chin and raised it to meet his eyes. His touch was cold and unnerving.   "I will graciously accept your request to bring back the life of your fallen betrothed," said Keldrin glaring deep into her soul, "but the cost will not be your daughter's life."   Her eyes shocked wide open by Keldrin's statement, quickly filling with tears of relief.   "Thank you, my lord, thank you for sparing my daughter's life and granting me my husband back!" she said bowing once more, "What price do you ask? Anything, my lord, anything!" Smiling once more Keldrin lent down towards her and whispered in her ear.   "Your child will be my most devout, I have already seen it. But she must be taught by those who are already devout and loyal to my way, you understand yes?" said Keldrin. She nodded in reply.   "Teach her in my ways, use my teachings and raise her to be mine and mine alone," he raised his hand and through a small circlet of smoke appeared a blackened tome emblazoned with his sign, "Use this as your guide, teach from it her devotion."   "Yes, yes! Of course my lord! She will be your greatest devoted, I swear!" She yelled in response to his instructions.   "Good, but know that it won't be an easy task," he said looking down at her once more, "For, in the end, she must collect for me the true cost of this gift."   Her confusion was brief for after these words Keldrin enveloped in smoke disappears, a smile still splayed on his thin face. The moment he disappeared the room snapped back into reality and the full force of labour began. A crack of lightning and a scream. The life of Keldrins most devout would soon begin. 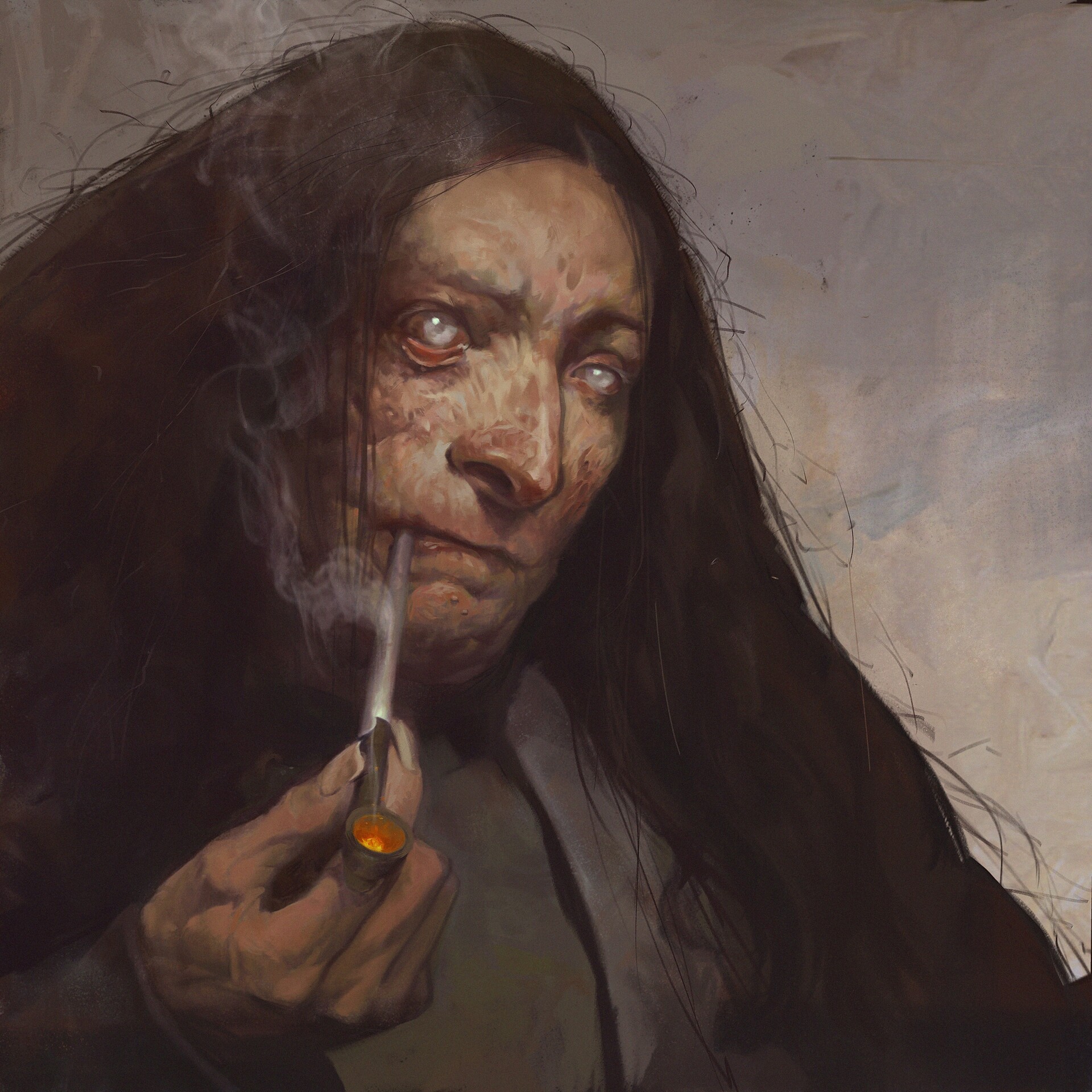 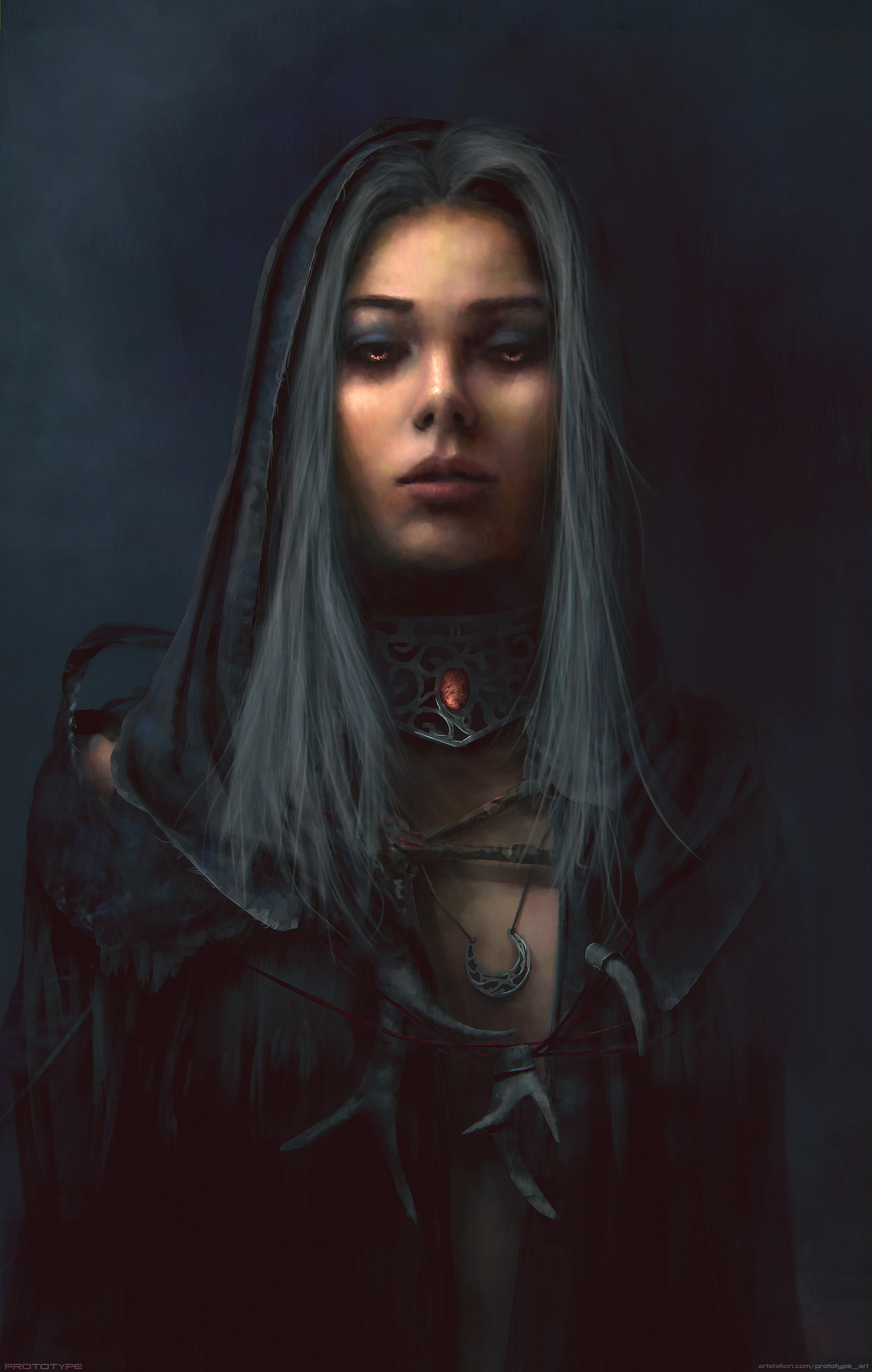 Witch by K.
A young Gertzu 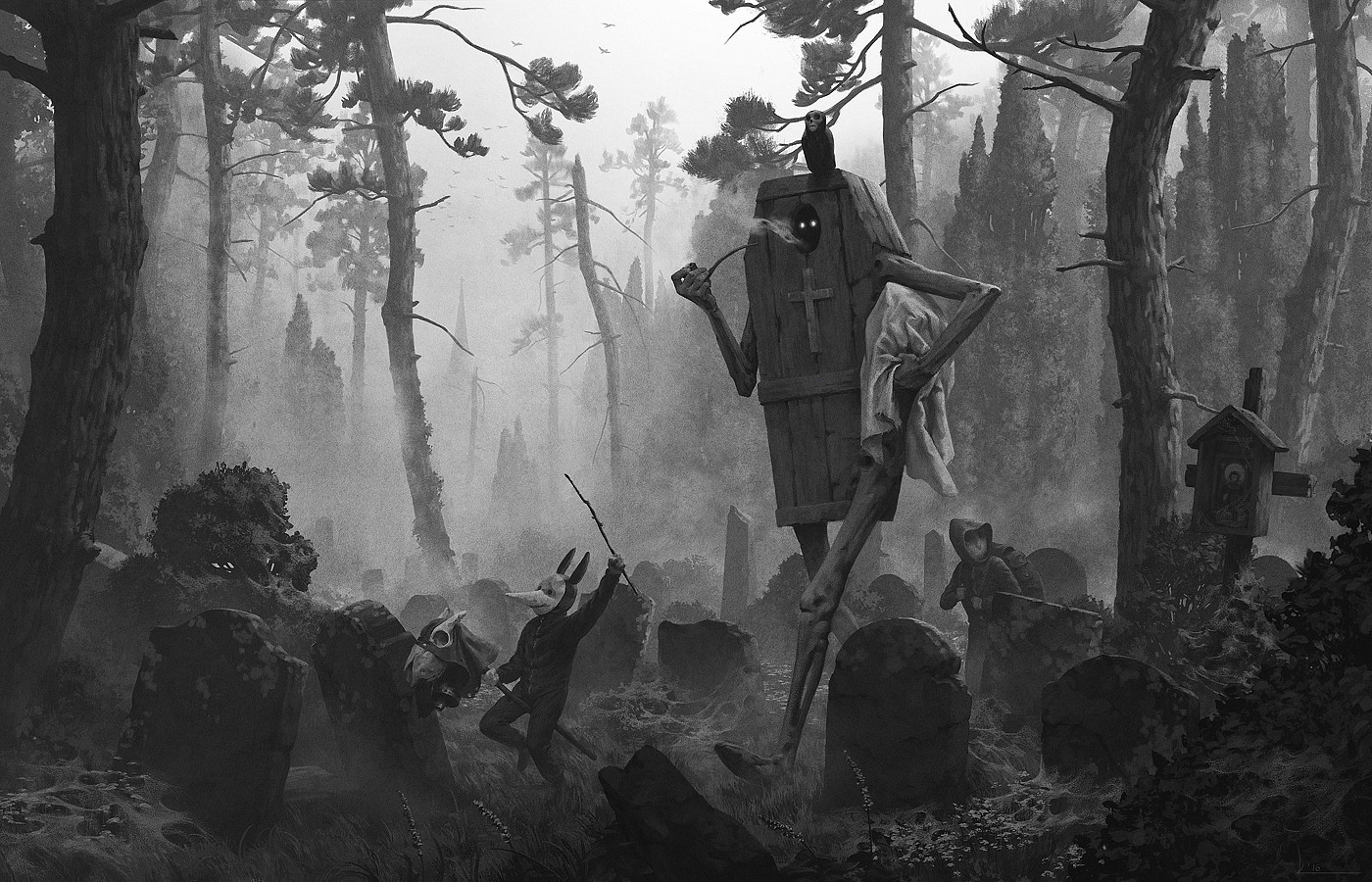