Dear Zenyi,
I hope this letter finds you well. Knowing my luck, you'll have returned to Temru before you get this and I can just say all this in person and save the ink. I'll write anyways, though, but even if you never read this, I want to write it.   I made a mistake. It wasn't a big one (but naturally I'm still anxiously waiting the day that happens). It's stupid, really. I forgot that Vishim doesn't have its own high court, and so told the Vishim representative to stop wasting federal money by sending all its cases to Temru. He politely explained to me that this is the standard arrangement, which of course I remembered as soon as he said it.   I looked like such a fool. I heard mutterings of the council afterwards, about how my mother would never have embarrassed Temru like this or that Serri at least was prepared to reign. Do they think I don't know? A day doesn't go by that I don't wish Serri were here to take her rightful place as empress. But she's dead and I'm doing the best I can. You would think I could get alone better with them, since we have so much in common: I *also* don't want me to be the emperor.   I'm sorry that this letter is full of so many complaints. It's been a bad pain day in general so I'm also annoyed about not having the strength to walk into the meeting today. I've been thinking longingly of your back rubs all day; I can't wait for you to get back. In lighter news, they've finally finished laying down paving stones on the trail that leads to the koi pond in the gardens. When you get back, we can go there again. I hereby give you formal permission in writing to push the emperor into the pond. It's only fair since I accidentally knocked you in last time.   This paper is too short, but I'm afraid I don't have the energy today to go looking for more. I hope your tour is going well and I look forward to having you here with me again in a couple months.   With love,
Laeken

He was always strong and fit though not overly buff, with a beanpole figure. He fractured his spine at the L3 level three years ago. It was an incomplete injury, allowing him to still have weak motor control and dulled sensation in his legs. The injury also left him with chronic pain that occasionally flares up along his spine and into his thighs.   Since the accident, he primarily uses a wheelchair and his arms are disproportionately muscled. He can move quite quickly in the chair, but when walking, he moves slowly and shakily with a cane.

He has a lighter complexion. He takes after his Sarvich father and stands out in Temru, which is primarily Baan. His legs are not as muscles as his arms since they don't get nearly as much use.

He is left handed, which results in him having very untidy handwriting because he either uses his write or holds his pen awkwardly to avoid smearing ink all over the page with his palm. He usually isn't patient enough to write slow enough for it to dry before moving on. When he still fenced, it gave him an advantage as most opponents had no experience fighting a left-handed person.   His gait is very noticeable as he walks with a cane. Both legs are equally crippled, so he uses it to lean on for both steps, sometimes clutching it with two hands.   Left-handed, walks with a cane or else uses a wheelchair.

He wears very fine clothes given his royal upbringing. He wears clothes typical of Baan nobility, but he's made some changes. It's typical for the outer robe to reach the ankles, but he has his hemmed to above the knees so that the draping fabric doesn't tangle in the wheels of his chair or make it harder for him to get up.   Fabric is usually silk or cotton dyed in bright colours, and trimmed with geometric patterns.

He is always seen with either his cane or his wheelchair. His cane is made of polished wood and is unadorned. His wheelchair was specially made, with the backrest modelled after the imperial throne. It's made of wood, with red fabric cushioning on the seat, arms and back. The backrest is trimmed in black, polished wood.

Laeken was born in Mangzmat City as the younger son of Empress Pellye. His father was the king of Mangzmat, who conceived a child with the empress to cement Mangzmat as a part of Taalora. Laeken grew up with his father, and only interacted with his mother during diplomatic visits.   It is typical for children of the empress to remain with their fathers families until they are 13, but his father died during a flu epidemic when he was 11. Laeken was made King of Mangzmat in name only, with his aunt serving as regent. Meanwhile, he moved to Temru to begin living with his mother.   His older half-sister, Serri, was destined for the throne and Laeken dedicated himself to studying diplomacy to be as useful to her as possible. In his spare time, he studied history and botany out of love for the subjects, and took fencing lessons.   When he was 13, his fencing instructor retired and he started taking lessons at the military grounds with the standard recruits. This is where he met Zenyi who quickly became one of his closest friends.   At the age of 19, he was returning home to Temru from a diplomatic trip to Suitae along with his mother and sister. Their Indarig was attacked by Taegin terrorists, who killed Pellye and Serri. Laeken fell from the indarig during the assault, which badly damaged his spinal cord. He was left with minimal feeling in his legs and can only walk short distances with the help of a cane. Since the attack, he primarily uses a wheelchair.   With Serri killed, Laeken was the next in line for the throne and was crowned emperor shortly after the attack. He also became King of Mangzmat, but the delegated the responsibilities to his aunt so he could focus on the empire.

Private tutors in every subject under the sun. His education is extensive and impressive.

The day his family was killed marked an immediate and severe turning point in his life that he still struggles with. He suffers from frequent nightmares and has panic attacks about terrorists coming back to finish him and he can't run away.   The huge pressure of running the country keeps him almost constantly stressed, and the fact that the rest of the court has made it clear they don't think he's doing well has given him a lot of self-loathing.   In the modern day, he would likely be diagnosed with PTSD.

He desperately wants to be a good ruler. He truly cares about Taalora and wants to do good by his people. There's selfish desire there, too, where he wants to be respected as a ruler. He would do anything to win the approval of the populace and go down in history as a fair, noble, successful ruler.

He's very bright and a voracious reader. His favourite subjects are history and botany. Nothing makes him happier than seeing the steppe erupt into wildflowers every spring, and he can name every one of them.   He's skilled with a sword, although he's unable to fence after becoming disabled. Zenyi will drag a chair over to spar with him sitting down, though, and he usually wins.

One of his virtues is that he is very honest and compassionate. This often ends up being a flaw because he does not have the head for pragmatic decisions and secrets that a ruler sometimes requires. Because he strives for honestly, he tends to expect the same from others and isn't good at telling when others are lying to him.   He always wants to help people. He grew up reading old heroic myths and absorbed a desire to be a do-gooder and a hero of the people, but the downside is that he tends to fall for every sob-story he hears.

Very charming and polite. Is actually an introvert, but is very good at diplomacy. He may not be a popular emperor, but most people who talk to him find him pleasant and well-spoken. The general consensus among the court is "nice kid - not a god politician".

He speaks Baanang with a Sarvich accent, which is his native language. He tends to speak slowly and softly, putting a lot of care into his words. He's polite and speaks very formally unless the listener is an intimate friend. If he swears, he only does so in Sarvich and he avoids that when another Sarvich speaker is in the room.

Laeken grew up with his father and only met his mother a few times a year. He began living with her when he was 11, although she didn't have much time for him. He was always civil and polite with his mother, and he was upset when she died, although part of that upset was the regret that he lost his chance at building a deeper relationship in the future.

Laeken never got along well with Kellin during his visits to Temru as a child. Once he lived there permanently, he confirmed his opinion of Kellin as a cold, unfriendly man. After his mother died and he took the throne, Kellin became keen to seize power for himself and frequently tries to undermine Laeken's authority. 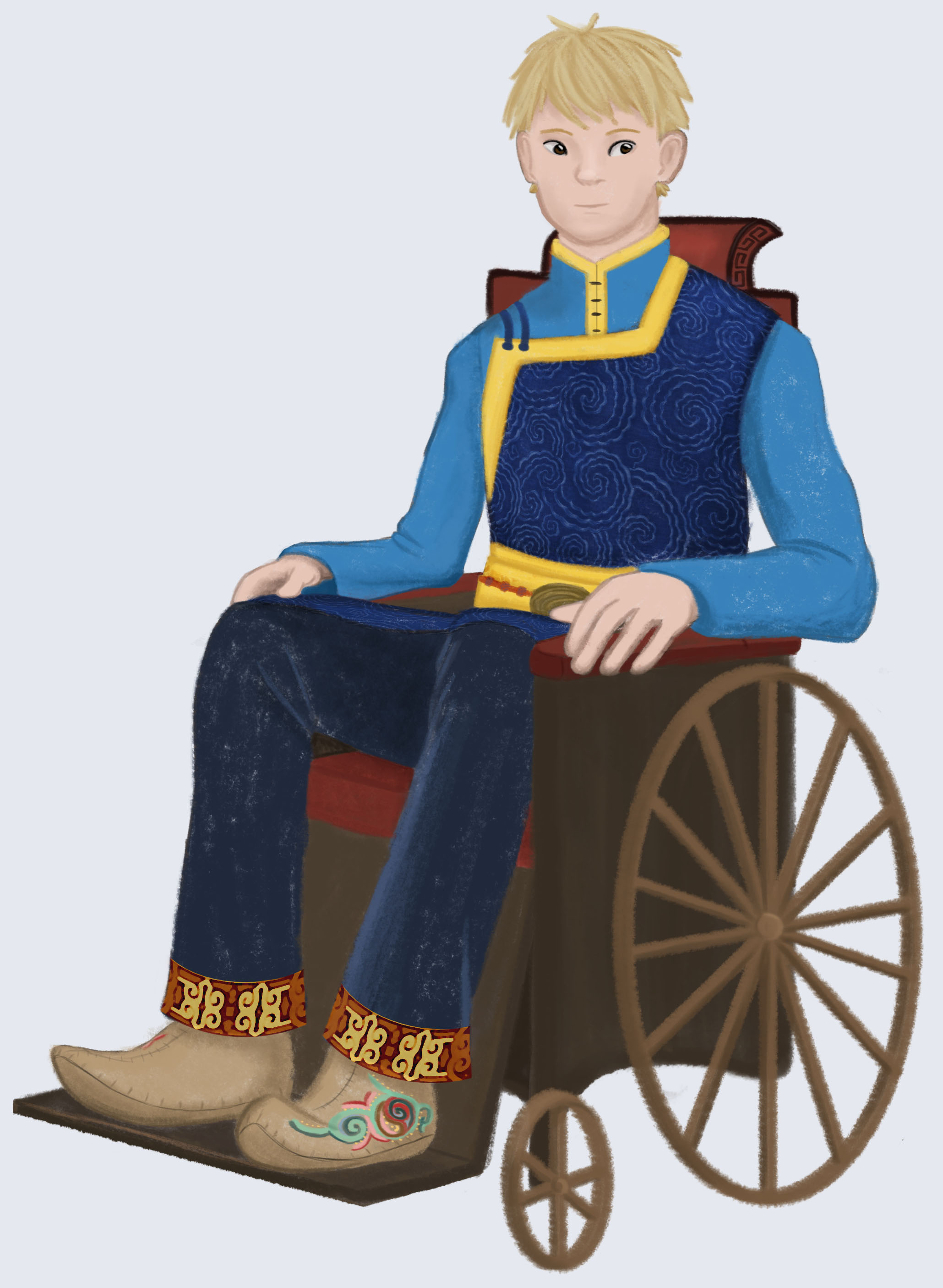