Month 8, Week 4, Year 918
Banished from Bocaccio's, the Fortunate Five relocated to the more upscale tavern Firenze to interrogate their captured ginger. Phaedra used 12GP taken from their captive to pay for the room and a lavish feast as the party prepared for a long night of questions and planning.    When the rogue finally woke up, he introduced himself as Patrick and appeared to be bemused by the fact that the party hadn't killed him yet. He answered many of the party's questions about Ilariano Vivaldi, revealing the location of his hideout and how to get the other agents to let them inside. The interrogation wasn't without some complications, however: Patrick's obnoxious taunts got him stabbed by Bubbles and slapped by Windred, requiring three Goodberries over the course of the night just to stay conscious. In the end Zan'kiri and the others decided to keep Patrick at Firenze's until Ilariano was dealt with, after which they'd pay for a ship to take him north to Craxi (the party could sympathize with the expensive travel rates in Pescat.    Later Ysmyrelda returned to Bocaccio's to pick up Argus, who'd spent the entire day studying dragonborn literature at the Uffizi. A little dejected by the measly 25GP bounty that his pirate legacy was reduced to, he at least knew more about the Dragon God-Queen Miraghan and her fights with the corrupted Dragon Lord Garyx. While Ys was out she also tried to buy some gloves so everybody in the party could safely hold Bubbles, but after an intense encounter with a local tailor she purchased some cheap mittens from a tabaxi and called it a night.    During all of this Zan'kiri and Windred had a long telepathic conversation where Zan revealed his gith heritage and explained the history of his people. The gith had no love for illithids, and stuck on Ekal's moons they dreamed of one day returning to their home planes. The two of them also tested the limits of Windred's psionic abilities, bonding over their affinity for psychic powers.    As the night drew to a close, Argus and Phaedra kept an eye on the nobles partying downstairs to see if any would fall victim next to the invisible killer. Sure enough, a group of four left the tavern at midnight and found themselves slaughtered in an alleyway by a pair of shadowy claws. The dark figure vanished into the night without attacking the two adventurers, leaving them to explain the situation when a bullywug captain raced towards the scene of the crime with a group of guards. The bugbear and yuan-ti were too poor to merit suspicion from Cpt. Frogery, the bullywug convinced that the killer was a wealth-hating beast envious of Sardivelia's wealthy elite.    The Fortunate Five reunited and took turns keeping watch through the night. When it was Argus' turn he took a moment to explain to Patrick the importance of respecting women. Coming from an eight-foot-tall bugbear, the ginger was convinced and gave an apology to Windred next morning for his rude behavior. Now it was time for the party to have a similar conversation with Ilariano on the consequences for child slavery... 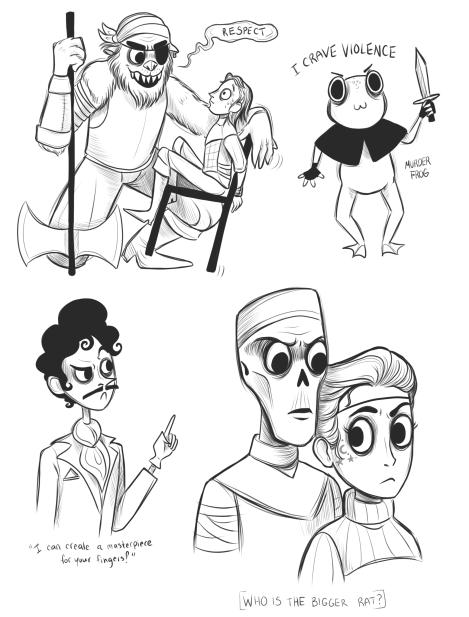