As a discipline within the evocation school of magic, aeromancy involves the manipulation of a primal energy, specifically air. Its antipode is geomancy. Despite the namesake relation to air, the canonical example of aeromancy is the lightning bolt (a superheated stream charged with magic), which commoners usually associate with fire. Prosaic examples include gentle breezes and vortices. Advanced aeromancers can cast emulations of tornados that wreak havoc in battle and a group of coordinated wizards can propel typhoon-speed winds across an area to devastating effect. 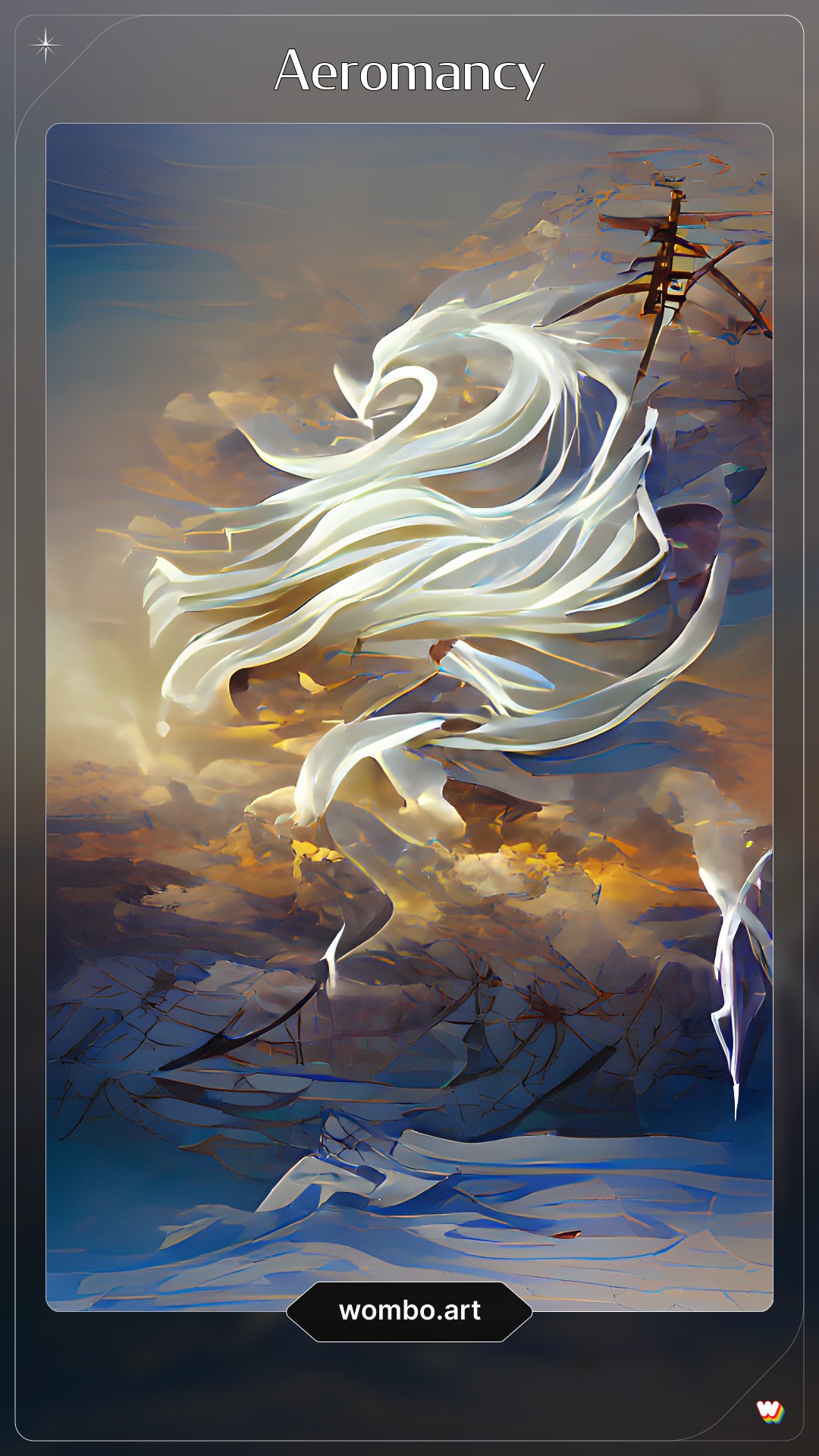 Aeromancy by Wombo ("Air Wind Flowing
White Lightning Magic")
In general, evocation mana structures are associated with a spin, speed, and geometric shape. Aeromancy is described as an efficient discipline because most spells are low in 'heft' (that is, requiring lower mana input) and, consequently, consume less mana. Magical theory attributes this efficiency to air's limited mass plus the minimal effort required to shift it. The challenge of aeromancy lies in coordinating the direction of the movement and over a large area.   The basic mana structure of an aeromancy spell is a torus of rotating mana, characterized by a clockwise rotation surrounding the upper body of the wizard. The mana vectors used for aeromancy are those of the sternum, nape, and shoulders. Each vector expels mana appropriately, giving rise to the rotation. For instance, the nape would exude mana to the rear-left and the right shoulder would send mana directly backward. Once this structure is formed, the torus can be moved to the location best-suited for the spell. Aeromancers can leverage the mana vectors in their hands to force more energy into the torus via a sweeping motion from left to right, following the rotation of the torus. This can be repeated to inject more mana into the torus and, for observers, is an indication of an especially potent spell.   Aeromancy cast over an area typically leaves the torus parallel to the ground while moving and expanding the size of the torus to match the target. Spells projected away from the wizard 'flip the torus' vertical; keeping the rotation clockwise from the caster's perspective. (Some aeromancers, in a panic, have fired a spell into themselves due to a mistake in the torus flip.) When the spell is cast, the structure collapses, shattering its 'top' and unleashing the spell.

Torus design is the key component in casting an aeromancy spell. Compared to the base structures of other evocation spells, the torus is complex, but also the most mana-efficient. There are three factors to control:         The velocity of the rotation determines how much of a 'spiral' the spell takes on in its casted form. A higher-speed mana flow produces a stronger shearing force while a lower one may move the same amount of air, but with weaker shear. Thus, aeromancy that manipulates the wind into a new direction uses a 'lazy flow' and the wizard expends their mana reserves to shift more air, but slowly. Additionally, the lazier the flow, the longer the spell lasts (for the same mana expenditure).   The outer radius of the torus affects the area of effect. Unsurprisingly, more mana is expended with larger tori. Weather-altering aeromancy requires a complement of wizards to have any notable result due to the limits any single aeromancer can sustain. Further, such spells must maintain a considerable difference between the inner and outer radius (that is, a sizable cross-section).   When the inner radius is modified, it establishes the cross-section of the torus. This radius is often leveraged solely as a means to augment the strength of the spell. Wizards commonly fill their torus with a consistent density of mana regardless of the spell (for expedience and consistency) and, therefore, the potency is proportional to the cross-section of the torus. The inner radius neither changes the area of effect, nor the speed of the resulting wind. At one extreme, with a minimal gap between radii, the spell has little power and evokes no more than a gentle breeze. At the other extreme, spells can become an entire windstorm.   The lightning bolt, while being the prime example of aeromancy across cultures and nations, is reserved for highly skilled aeromancers because of its exacting requirements. A bolt must push the mana flow as fast as tolerated without breaking the torus while simultaneously maintaining as small an outer radius and an almost non-existent inner radius. The small cross-section forces the caster to use a much higher density of mana than normal, which is the barrier that few overcome. Only when the combination of these dimensions reach an inflection point will the spell switch from a narrow, strong gust of wind and into fully-formed lightning. Other spells, such as ball lightning, are actually easier to achieve.   Ironically, the 'static shock,' not the devastating lightning bolt, is the highest form of aeromancy. Similar to a bolt, the torus dimensions remain tiny, the speed of rotation exceeds absurd, and yet the mana input must be miniscule. Reaching the inflection point with such a small amount of mana is indicative of a craft honed to perfection over decades. (Con artists will sometimes portray themselves as master aeromancers by shuffling their feet on furs and shocking a subject via physical, rather than magical, effects.)

Evocation spells, aeromancy included, rarely require overly complex verbal components to be cast effectively. The majority of the effect's shape, direction, and volume are determined by the torus structure. Verbal components affect the way in which the torus collapses in addition to providing some guidance over distance.

The beginning of an aeromancy chant sets the natural, physical laws that will govern the spell. Many evocation spells are cast to ignore gravity, but aeromancers, in manipulating air, avoid spending additional time and mana controlling gravity (magical airflow is minutely affected regardless). Instead, the wizard allocates mana to modify momentum by increasing air density; essentially a difference in pressure. Overall, expending mana to alter pressure is more mana-efficient. However, the balance can be delicate and judging the combination requires experience and experimentation.   Aeromancers casting a guided spell frequently reduce, or eliminate, certain thermodynamic effects for guidance (see below).

Little about the concentration of an aeromancy spell is determined by the verbal component given the design of the torus. The exception is casting long-range spells further than the caster can manipulate and move the torus. In these cases, the aeromancer adds phrases squeezing down the torus for 'transport' and re-expanding it at the destination, where it collapses and releases the spell. This is useful during combat where the wizard must bypass friendly troops.

Verbal components can guide a spell around corners or through a series of turns to avoid obstacles or collateral damage. Though not generally used, these components can navigate a spell through battle or maximize the effect at the end of its path by ensuring its full power reaches the target instead of wasting it in flight. The fewer turns, the simpler the chant becomes and the less mana expended. However, it remains more mana-efficient to adjust the concentration of the spell and direct it along a straight line.   Aeromancers can choose to modify the torus collapse to change it from a top-down to a sideways-in collapse. This can evoke a 'point-blank' effect wherein the gust of air expands outward in all directions from the caster (useful in creating space for an escape or room for other actions).

Always seem to be sailing into the wind? Can't catch a break from mother nature? Our specially designed, enchanted sails can divert that wind into its proper place! Sail with the best and invest!   Surprised to see this here. I thought they only provided work for the military. Threads must be spun from the silk of a diamond-encrusted spider ass though...