The canonical example of wizardry, pyromancy is an evocation discipline and deals with the manipulation of fire (or, technically, heat). Its antipode is cryomancy. Across the eleven magical disciplines, inclusive of conjuration and law magic, pyromancy is regarded as the easiest to cast. Even untrained pyromancy adepts evoke flames hot enough to start campfires (or uncontrolled blazes). Aemark Kingdom wizards learn basic pyromancy cantrips in their first month of education because of the magic's utility and simplicity. That said, high-level pyromancy can set entire towns ablaze, melt metals, and command exceptional fireworks displays. 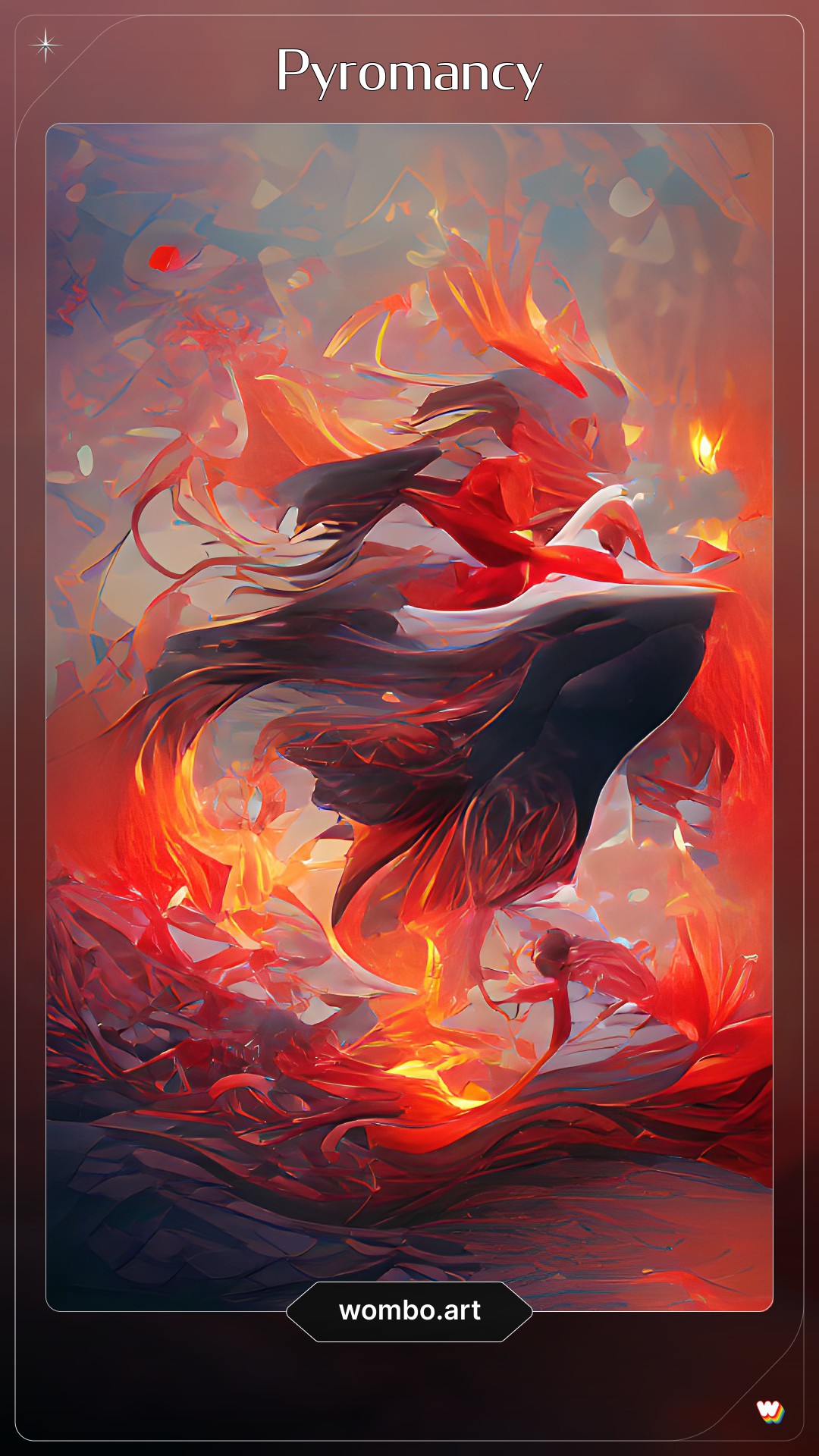 Pyromancy by Wombo ("Heat Fire Red Magic")
In general, evocation mana structures are associated with a spin, speed, and geometric shape. Pyromancy is characterized as a 'single-trail' discipline, meaning there is one aspect that greatly outweighs the others: speed. The mana structure of pyromancy is a rotating sphere evoked within a wizard's hands. Were the sphere a physical object, it would 'roll away from' the caster. While not fully understood, this rotation causes a rise in temperature whereas the counter-rotation brings about a drop (that is, cryomancy). Fledgling wizards with minimal control are still capable of sustaining the mana structure long enough to 'roll' the spell out and leave the caster unharmed (though the same may not be said for onlookers).   Typically, pyromancers adopt a crouching posture for casting, pulling their hands to their side as though protecting a ball. Using mana vectors in the hands, pyromancers inject mana forward at the top of the sphere and up at the back to quicken the spin. Bringing the resulting flame swiftly in front of the wizard and pushing the mana sphere away launches the spell toward the target. The devastating and painful results of a combat pyromancy spell are especially well-known among infantry, who recognize the gestures on sight (leading to tactical gambits to kill an enemy pyromancer before others).   The chief limitation of pyromancy is mana expenditure. The heat of a spell can dissipate without specific verbal components and, even then, is quick to fade compared to other evocation magics. The best way to ensure a longer-lasting pyromancy spell is to increase the amount of mana, leading early pyromancers down the route of exhaustion. Pyromancy education focuses on building up greater mana reserves and learning mana conservation techniques.

Professors at the Academies begin pyromancy instruction with the axiom: 'Spheres are easy. Mana is easy. Speed is hard.' This encapsulates the discipline well. The natural form of cupping a wizard's hands around an imaginary ball is, to no one's surprise, a ball. The mana vectors in the hands are the easiest to master because of their everyday usage and dexterity. Mastering the art of moving mana faster is considerably more difficult. Regardless, there are two key characteristics in pyromancy:       Rotation speed correlates directly with the heat of the spell. Faster is hotter and slower is cooler. Fortunately, as long as the caster maintains a tight sphere, heat remains within the mana structure until released, protecting the wizard from pre-cast injuries. Pyromancers adopt the mantra 'as fast as you can' when considering velocity, although there are limits on it with a given skill level. Extending beyond the caster's capability may cause a misfire and burst the sphere early, which ends in heavy burns or potentially death. Thus, wizards should imbue the sphere with additional potency only after the rotation attains the desired velocity. This minimizes the danger of misfires and limits friendly casualties to minor scarring.   Sizing the sphere appropriately depends on the target. Larger spheres spread heat evenly over a large area while smaller spheres are devastating in a small space, but dissipate quickly with distance. Radial control is implemented by spacing the hands closer together or further apart. The classic 'fireball' is evoked through a sphere roughly the bulk of a melon. A fireball is hot enough to set fire to woods and melt some metals. The similarly designed 'fire shot' shrinks the radius significantly. A fire shot blasts through objects, thin sheets of metal, and other obstructions and may not ignite wood or flesh because they are effectively cauterized on impact.   Considered the ultimate form of pyromancy, the 'fire beam' is akin to a continuous fireball and the most draining spell currently known. As with any regular fireball, the sphere is created, sped up, and imbued with mana. However, as the fire beam is unleashed, the wizard forces enormous amounts of mana into the spell continuously. The mana sends heat along the trajectory in a continuous and narrow line of superheated fire. The effect is terrifying and can be directed in a sweeping arc, leaving platoons of soldiers defeated if not dead. However, pyromancers, including masters of the discipline, are hard-pressed to sustain the feat for more than a matter of seconds and need minutes-to-hours to recover.

Though evocation spells do not require complex verbal components, pyromancy is often modified heavily with the chant. This leads to longer spellcasts and a higher chance opponents will take notice and prevent the wizard from completing the spellcast.

Though left unmodified in siege warfare, pyromancers, like other evocation disciplines, prefer to disable gravity and aim their spells along a straight line. Pyromancers also enhance the effects of thermodynamics to heighten the heat of the spell past what is possible through spin alone. Unique in evocation, pyromancers may choose to augment aerodynamics such that the heat of the spell quickens its travel time and arrives at the target almost instantaneously. A lengthy chant incorporating all three components is common.

Adjusting the concentration to minimize spell dimensions along its flightpath is all-but mandatory for medium- to long-range pyromancy. Critically, greater spell size leads to 'mana bleed.' Avoiding bleed retains more power as the spell reaches its destination. Further, enlarging the spell at its end maximizes the impact of the spell. Overall, applying concentration components to pyromancy is an efficient method to attack anything beyond fifty yards.

Spells moving along curved paths require a guidance component, but pyromancy adds another factor: burst shape. The final burst can be modified to almost any geometry, including strange or amorphous blobs. Frequently, unique shapes avoid harming friendly troops, but may be done to focus the blast through or around obstacles. Additionally, each area can have its own physics and concentration applied. Shape complexity contributes to an elongated chant. Pyromantic fireworks are an excellent example of how a spellcast is lengthened (sometimes to a minute or longer).

Tired of chopping wood to feed the fire? Need to get up to throw more wood on in winter? The Everburning company has you covered! From lamps to stoves to torches, everlasting fire to fit your need.   Not actually everburning; just long. Also, they don't give off much heat.