The law school of magic is predicated on applying limitations on the actions of living things, inclusive of both flora and fauna of all types. Unlike the schools of evocation and conjuration, the school of law comprises but three disciplines. One is focused on the mind: hex magic. One places limits on the body: binding. The last limits the soul: summoning. Law magic is heavily dependent on the verbal component, requiring near-perfect recitation and, uniquely, may include physical components to properly target the spell. 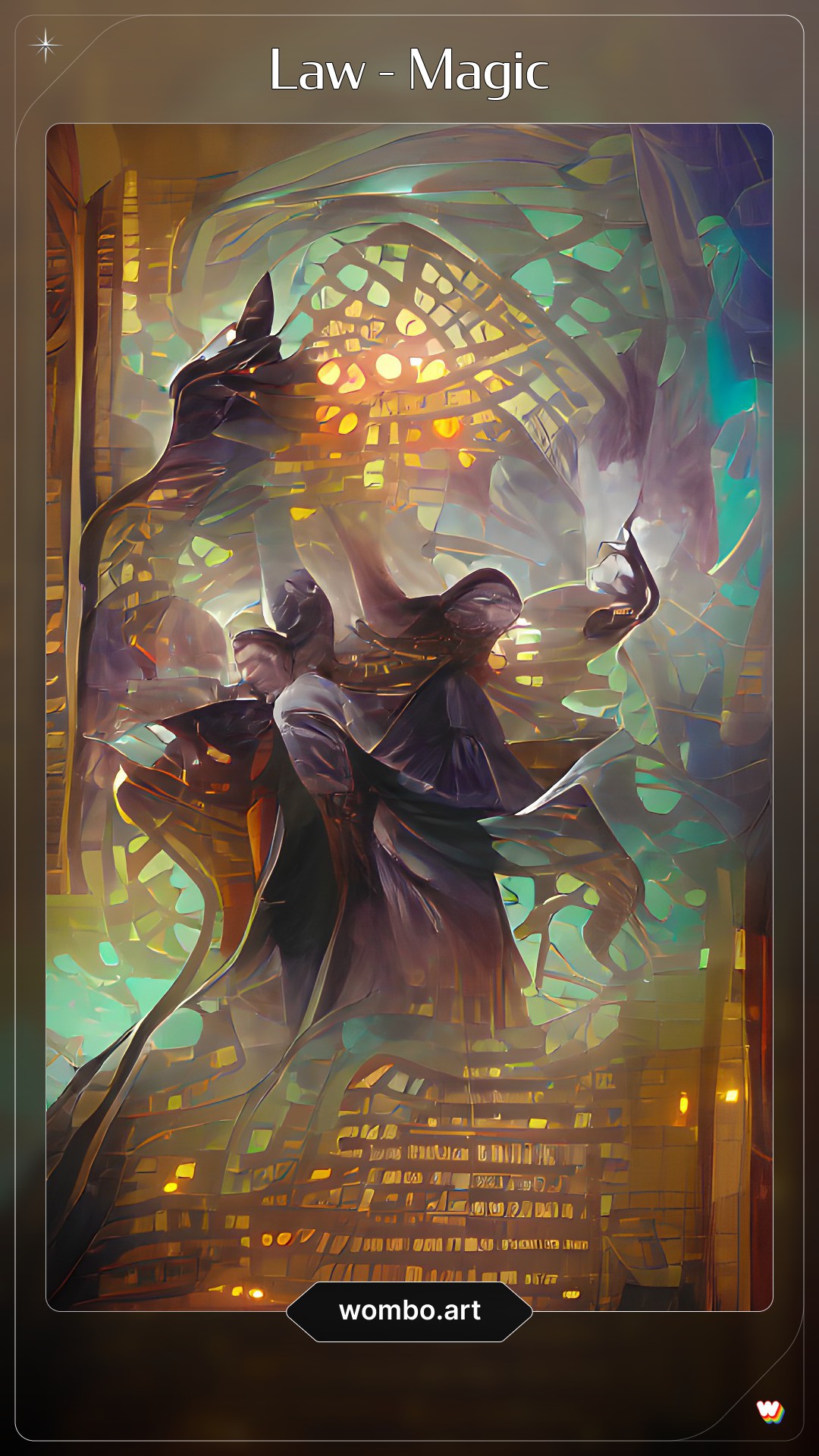 Law - Magic by Wombo ("Magic Law Control")
While the uninitiated cannot easily fathom mana structures in the same context as a wizard (nor see them using aether sight), attempts have been made to communicate the concepts and have been most successful in describing magic through physical laws. However, the law school is easiest to understand and is relatable by the average individual. Any commoner familiar with the law (that is, legal action; not marshals) will be familiar with the principles of law magic. In the same way that a parcel of land can be sold only with documentation and an amount of currency, a law spell requires 'documentation' and 'value.' The 'documentation' refers to the verbal component. The 'value' is the mana invested by the wizard. The flow and structure of the mana is simplistic compared to evocation or conjuration spells, typically as simple as a ring or series of concentric rings. There are slight variances between disciplines, as follows:         Even non-magical individuals can see the effects of these mana rings in some spells. A binding spell that lashes a person's arms behind their back will manifest as purple light that tightens around the limbs. This is a manifestation of the actual mana rings and can be seen by wizard and commoner alike. Hex magic is less visible than binding magic, but can be observed when the target is carefully examined. Its visual indicators are present in the eyes, which take on a darker, purple tint if the wizard chose to forgo a masking effect on the spell, which is common under duress or otherwise cast in a hurry.

All spells require a verbal component and, as many professors state: 'elocution counts.' As with other schools of magic, a law spell does not technically need to be elocuted perfectly to generate results. For example, a binding spell exhibits force equivalent to the mana consumed, regardless of clarity. However, when garbled, the application is uneven and targets showcase an uncanny ability to find weak points in the spell. Even the most dim-witted of creatures manage to escape poorly cast law spells. Scholars theorize this is a matter of survival instinct rather than innate magical resistance. Just like an animal would naturally shrink away from a fireball, they will instinctively escape binding.   As the school with the longest and most complex verbal components, the three disciplines are used strategically instead of tactically, but have the greatest freedom in content. Summoning is well-known for its long-winded chants, often extending over several minutes in length (and therefore are commonly written down). While the chants are shorter, hex magic and binding are not disciplines casually cast in the midst of combat except as a diversionary tactic. They can be quite effective, but come at a greater mana expense than an equivalently distracting spell from evocation or conjuration.   Verbal components in law magic are as expansive as the imagination of the caster. Nonetheless, the more aspects they attempt to control, the longer the chant, the more mana that must be maintained through the duration, and the more opportunities to misspeak. The aspects frequently controlled in hex magic and binding are movement, vision, memory, and speech, but can also involve any of the five major senses (such as removing taste), secondary senses (such as kinesthesia; the sense of a person's position), or organs (such as invoking an adrenaline rush). Summoning spells are founded on intent with a wide variety of controls, though the primary constraint is a variation of 'do not harm the warlock.'

Look no further than the professionals at 'Lawyer by Day, Warlock by Night' for your legal needs. Providing the highest standard of service with charm and style!   Self-regulated job. If they're a bad lawyer, they get killed by their demon. Maybe it's not so surprising there aren't more...

I dislike binding spells. First, they sound cruel. Second, it depends on prediction, which I suck at.

'What if we're all living in one giant hex?!' - Madman Proselytizing from Box

Basically magical contract law and every bit as annoying.