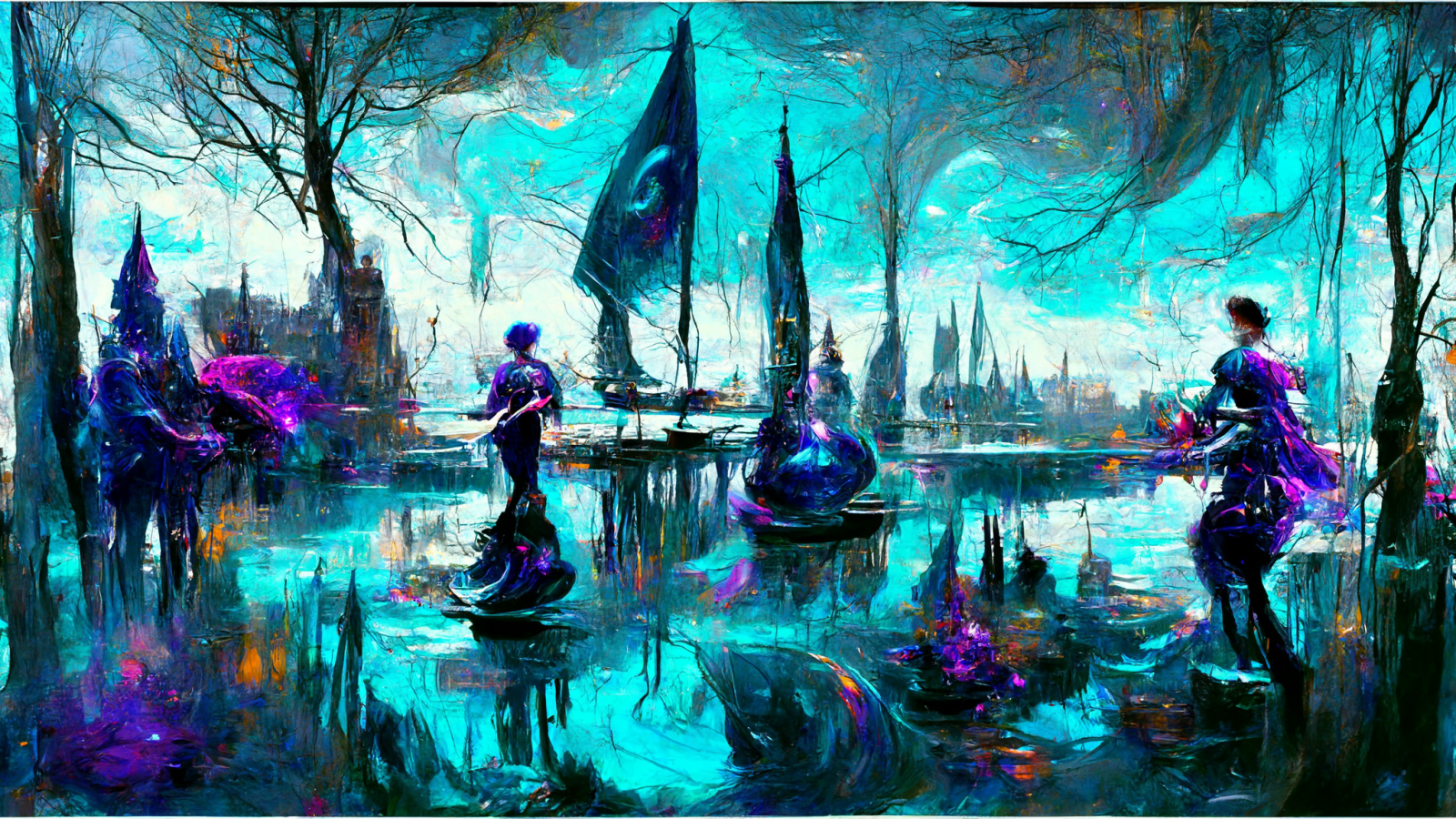 Surreal, bizarre, and yet evoke emotions I didn't know I had.

Artistic expression is universal and wizards are no exception to such desire. However, illusionists are notably well-suited to artistry with their ability to create intricate and interactive magic. They commonly work with enchanters to apply their illusions to inanimate objects, such as statues or canvases, and display or sell them. In the past decade, the 'mindcept' has become the latest trend among arcane art, which are captured on small shifts of paper stock and traded between collectors. 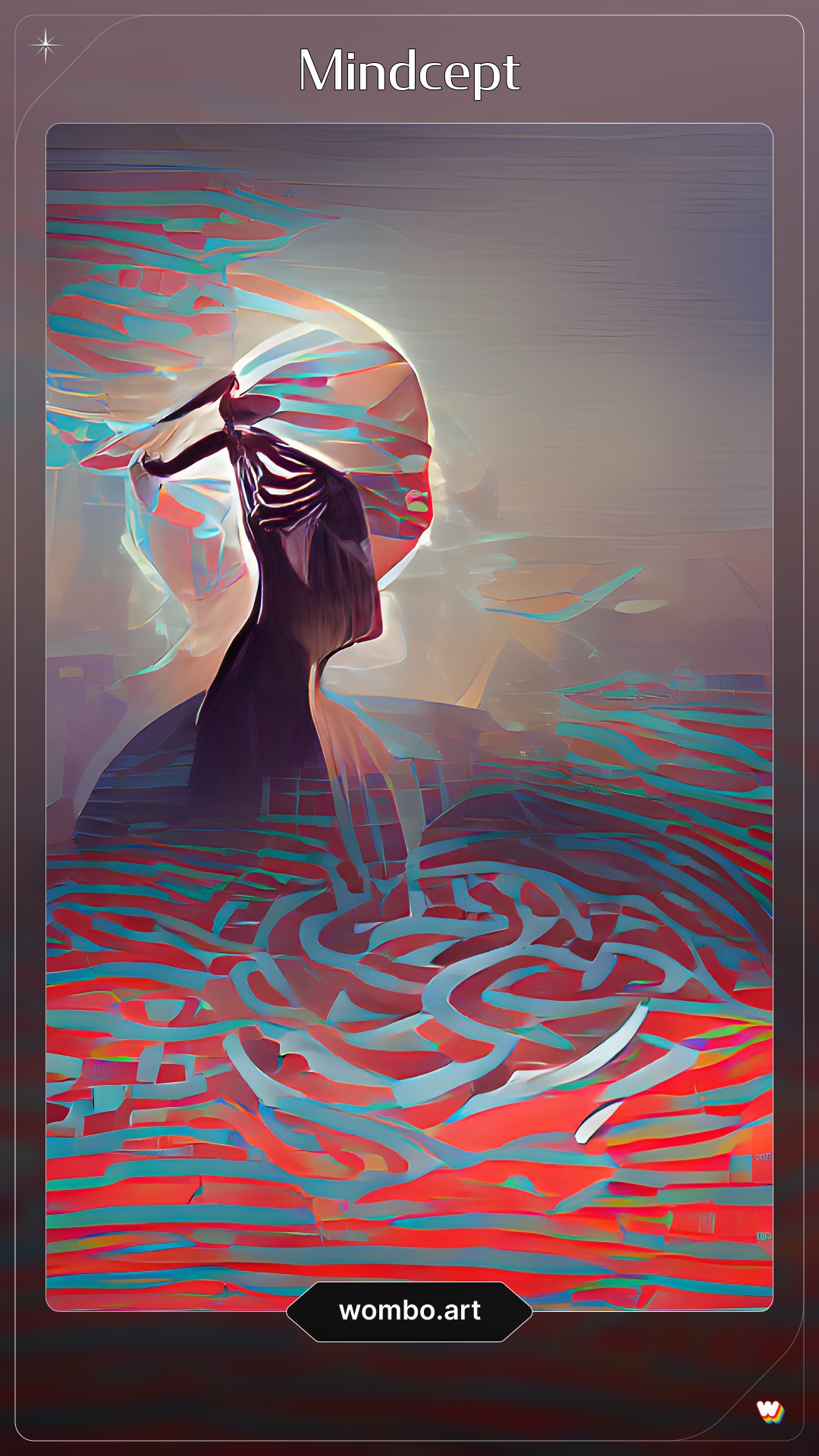 Mindcept by Wombo ("Illusion Concept
Mind Frame Idea")
Mindcept is the colloquial term for the 'mind's concept' of an object, place, idea, emotion, or person. In contrast to traditional methods of artistry, creating a mindcept requires very little training in transformation and transmutation magic, which allows students and even untrained adepts to participate in the community. The market is currently flooded with an abundance of them. Even so, the quality and emotive expression is heightened when generated by a skilled and experienced caster, making exquisite and beautiful cards rare and, consequently, expensive.   In essence, the principle behind a mindcept is similar to attunement testing, where a wizard channels energy without a verbal component or forming a mana structure to contain mana in a specific and organized way. Instead, the arcane wisps arising from the practice take natural or semi-natural shapes influenced by the caster's mana and soul. This is a process any discipline can undergo, but is most effective for transformation because the resulting visuals are larger, defined, and more easily imbued on paper by an enchanter.   Where mindcepts differ from such testing is in mental focus. Normally, the entirety of a person's concern is on directing energy to a specific point in the body, most often the hands, which in turn manifest as minor cantrips from their core discipline. When developing a new mindcept, the flowing power is secondary and the wizard thinks deeply on a subject, which could be as simple as a rock or as complex as the concept of freedom. In so doing, the trails of aether expelled from their fingers and palm organize into patterns mimicking raw thoughts.

Contrary to common wisdom, the surreal nature of mindcepts is not due to a quirk inherent in the magically-inclined which blurs and shifts a conventional image into a blended scape. The source of the bizarre lies in the relation of the subject to emotion, memory, beliefs, and personality. When a person, wizard or not, muses on a topic, they do not think purely of one specific thing. For example, when recalling a visit to an excellent restaurant, one cannot simply conceive of the image of a well-roasted slice of meat. The taste, texture, and pleasure of eating said dish is fundamentally intertwined with the visual.   Every individual is unique. Thus, no two mindcepts are alike, just as no two perspectives are the same. The jagged, sharp edges of one artist's interpretation of education may reflect the difficulty and hardship of knowledge gained painfully over time whereas the soothing and flowing lines of another shows an innate understanding of a subject founded over years of tutelage. Further, mindcepts created by the young are usually simpler and less expansive than the aged. Elder wizards have traveled, suffered, delighted, and grown through decades of life, creating connections between concepts fledglings have yet to form. 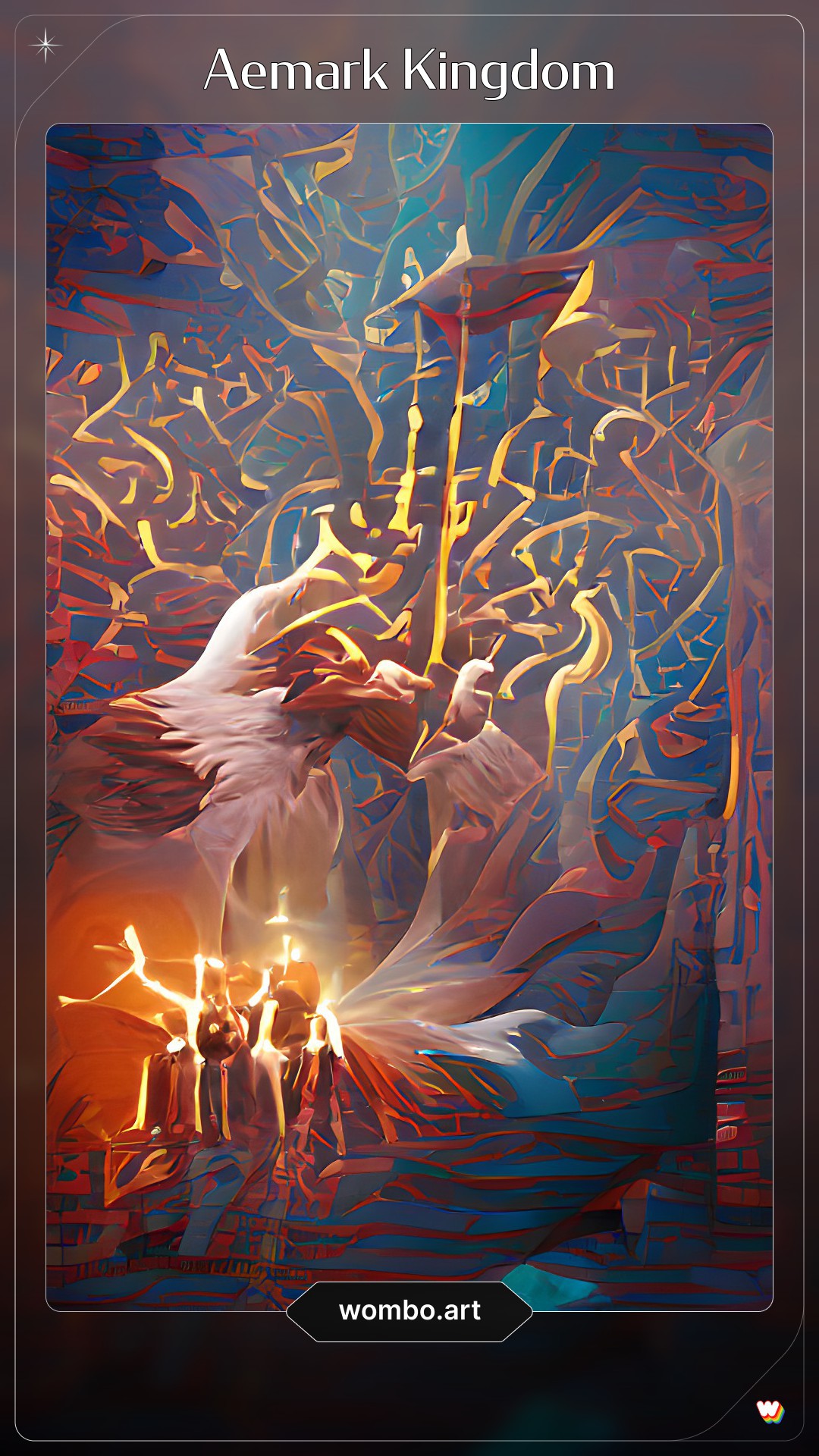 Aemark Kingdom by Wombo ("Kingdom Power Mastery
Convergence Unity")
Capturing the illusions is a relatively new trend compared to the century-old practice of the mindcept itself. Pairing an illusionist with an enchanter and a specially-crafted paper allows for preservation, which reacts with transformation and transmutation magic to permanently alter its color. This in turn results in an object to be displayed or bought and traded. The market for these 'cards' is quite active, especially in Venleif and the among the nobles of Aemark City. Wizards with extensive experience or with unusual personalities create more baroque and complex patterns within their mindcepts, increasing their perceived value.   Some illusionists are able to subsist entirely on the income made from cards, though this is rare and the result of years honing the craft and establishing a personal brand. More often, collectors amass a wealth of inexpensive and varied decks from young artists selling their mindcepts for supplemental Marks while keeping a more traditional occupation. Students are particularly likely to create cards for spending money beyond their Academy stipend. Creators turn a hefty profit from forming the cards themselves, which is an easy but taxing task and can scarcely meet demand.   Exceptionally wealthy individuals commission mindcept canvases as one would a portrait from a conventional painter. However, within the artistic community, these are considered sub-standard and tactless when contrasted with the purity of a independent work. The challenge of generating an illusion for someone whom an artist may never have met is interesting, but ultimately degrades the result. Connoisseurs do not begrudge the creators for earning a significant payment and wisely keep their counsel instead of informing these clients of the quality.

The current King, Markus the Sixth, enlisted Charad Kenelnlaesalyol Nuarat for a fantastically large mindcept of the 'Aemark Kingdom' to be preserved upon a tapestry for the Royal Collection. The Kingdom paid an estimated 750,000 Marks for the creation, whose image is shown here in miniature. Ken Nuarat is widely known for their striking hues and maze-like complexity, perhaps owing to their ability to conceive of and compute numbers as colors.

Got mindcepts cards? We want 'em! Have mindcept cards? We'll buy 'em! The best selection of cards available in the Kingdom is found here!   I have my own deck, but I wouldn't pay for them. Just picked them up here and there from other students.
Written by Sheyla Enelladalcol Aeleat

Even more useful if combined with the Divination school, and something similar to the Tarokka / Tarot card system.

Quite possibly, though this world doesn't really have a Divination discipline of sorts. Though I might have to work something along those lines in... or at least the appearance of it. <3

Sounds more like something that could be a more specialised discipline.